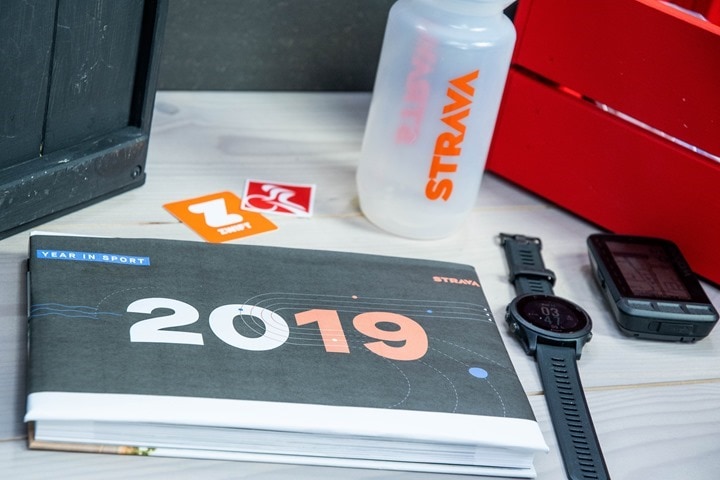 Ahh yes, December – time for eggnog, pepernoten, and Strava’s year end report. But yes, of course, I’ll once again point out that the report technically only covers data from Oct 1st, 2018 to Sept 30th, 2019. I think for Christmas this year I’m going to send Strava a calendar to explain how years work. Probably this one, as I can’t find anything more perfect. Oh snap, except this one – it’s amazing! Wait, there’s a calendar of sloths? Still, despite Strava apparently having a imerologiophobia, the report is full of actual sports tech information – including devices, bikes, and shoes.

(I really will send Strava a calendar, further suggestions welcome in the comments.)

And in fact, I think this may be one of Strava’s best reports yet. Up till now they’ve always held back on some tidbits of data. For example – they never talked about how specific brands fared, always hesitant to upset the partnership apple cart. But maybe now they’re realizing that the people they need not upset are their users. Happy users will give more revenue.

So I’ve been pouring through the stats today and here’s all the juiciest bits. I mean, there are non-juicy bits too – like goal setting. But you can read about that in the gallery.

First, we’ll start off with the top-line numbers. This includes 48 million athletes and uploading 19 million activities per week. Strava notes elsewhere that they continue to add about one million members per month, which has been a mostly constant rate for quite a while now (as proven by having 42 million back in July). 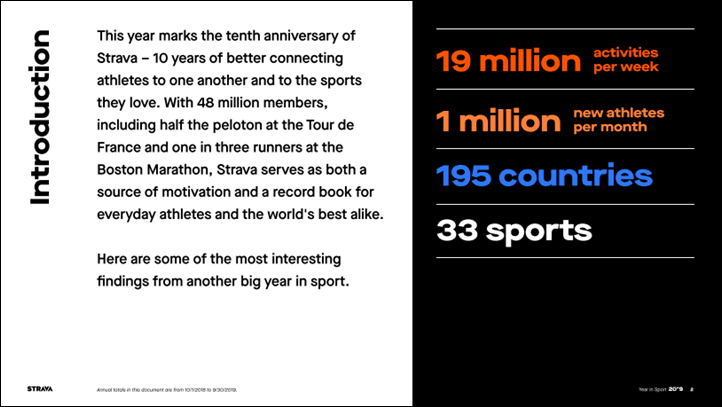 Now, as with any math project – Strava or otherwise – you need to be careful about drawing too many assumptions using simple math. For example, this doesn’t mean that only half the members upload each week.  In fact, it’s far less than that. Roughly about 15% upload monthly, if looking across the entirety of all Strava members ever created.

This year Strava has actually split up reports by a bunch of countries. The main global stats are…well…global. But occasionally you’ll see secondary stats next to a flag for a given country. In the case of the below, the US. Still, if we look at this global stat for when people workout on week days, it’s interesting to see that people tend to go out earlier with groups. Also, that group rides tend to double the distance of solo riders. 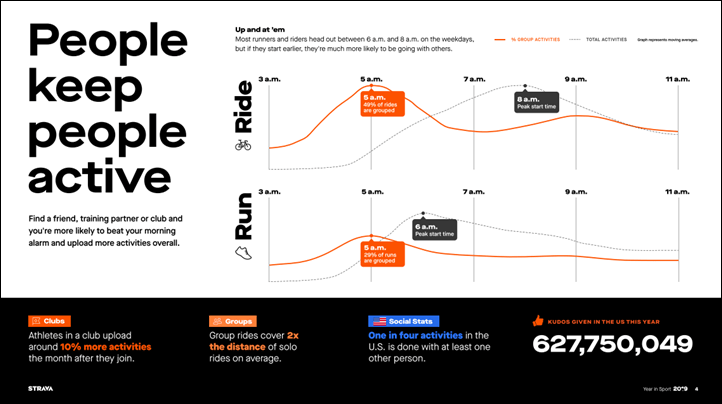 The next stat will surprise approximately nobody – people are riding indoors now more than ever. And more than that, they’ll riding indoors in the summer months more than before. 4 years ago, only 0.2% of people did rides indoors during the summer, versus that’s up to 4.9%. However, one nuanced tidbit here is that it’s not clear if these are technically just GPS-less rides, or rides actually marked as “Virtual Ride” – which is a specific indoor category that apps didn’t actually start to leverage till around late 2016 or so. Still, I’m pretty sure the point is mostly the same here. 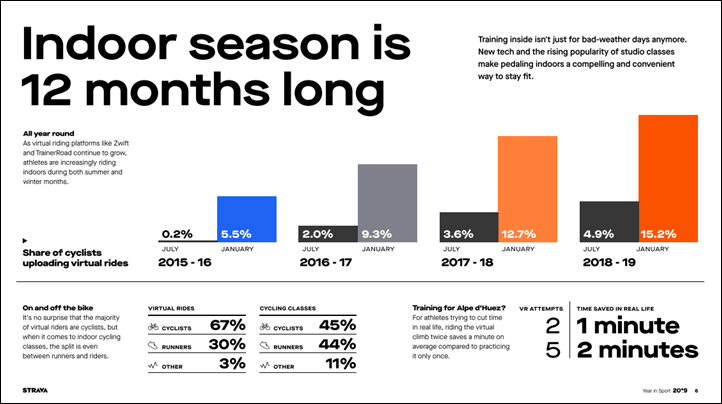 In totally unrelated news – what on earth is going on with Japan? Somehow 23.8% of runners completed a marathon or ultramarathon this year. Really? This seems like an absurdly high number. I’m sure the stats are correct, but at the same time it also tells you how little penetration into the Japanese market Strava must have. It’s clearly only attracting the most ardent of runners – as compared with US and UK share being 5.8 to 7.6% having completed a marathon. 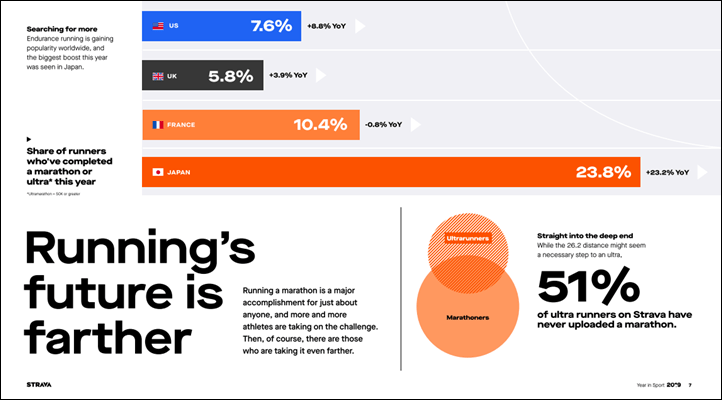 Now here’s some of the good stuff! Actual name brands. These shoes and bikes are what you can actually specify in your Strava profile. I don’t bother to update my shoes there, but my bikes are roughly correctly listed (I have a catch-all though for ‘Random Rental Bikes’, when travelling).

There’s even a section on the side with actual device listings. It’s almost like someone was channeling their inner DCR! 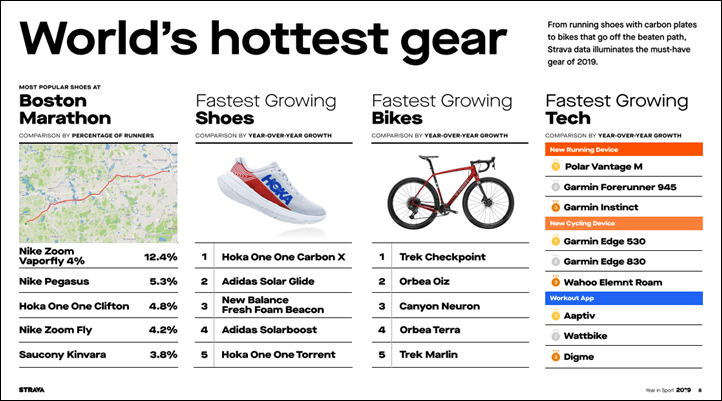 Except there’s a huge catch. See that little text that says “Year-over-year growth”? Well, that makes this category mostly useless. And by mostly, I mean entirely.

See, the Edge 530, 830, and ROAM all came out in 2019 (within a week of each other in late April/early May). So, their YoY growth will be any value you want, since last year was 0% share. Running is much the same. All those devices came out after Oct 1st, 2018 (when this report started). The Polar Vantage M and Garmin Instinct started shipping last November, and the FR945 in May. It’s a peculiar way to present the data, since a far more useful would be to show that overwhelmingly old devices lead the way.

But that probably would upset partners. The way they’ve shown the data here basically aims to show brand diversity. As we know from numerous stats over the years (and this year too), otherwise this would overwhelmingly show Garmin and Apple domination. Not to mention that a non-trivial number of people upload their Apple Watch data with 3rd party apps that Strava doesn’t reflect as being Apple Watches.

Which is ultimately how we get to workout apps like Wattbike and Digme making the top 3 apps. Of course they aren’t. We all know that. They’re nowhere near that. But when viewed in the lens of ‘new things of sorta-2019 with 0 as a starting point’, then I guess.

Now, to Strava’s credit here – they did put useful information around the bikes and shoes. In this case in the appendix they listed the average ride speeds for the top 5 bikes. Of course, there’s many ways you can slice and dice this. 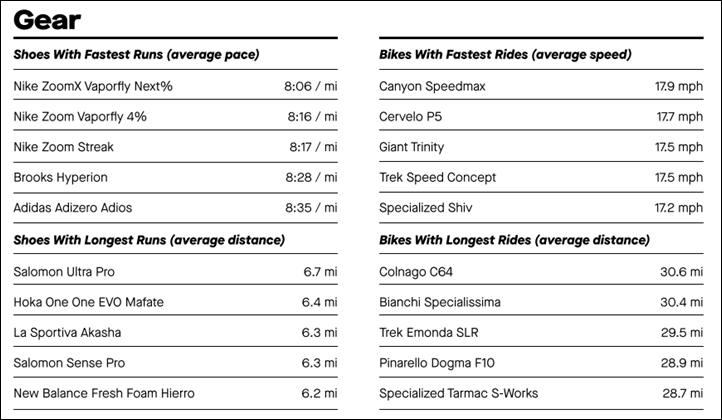 For example, one would probably point out that the Canyon Speedmax is far more affordable/accessible in Europe than the US. And unless you live near a national park or similar land in the US, it’s likely that your rides will have more stoplights than many places in Europe, where there tends to be less suburban sprawl. Meaning, once you’re out riding unobstructed roads you’re out (aside from the fact that bike infrastructure tends to be far better in Europe).

I’m sure some people could dive into the nuances of that all day long. But still, it’s cool stuff to see.

Switching topics entirely – we’ve got got the hangover. It’s funny to see how much later people workout on January 1st after a night partying than the baseline for the rest of January. Inversely, when we gain an hour for daylight savings, many of us (certainly me) quickly shift to later rides and runs. 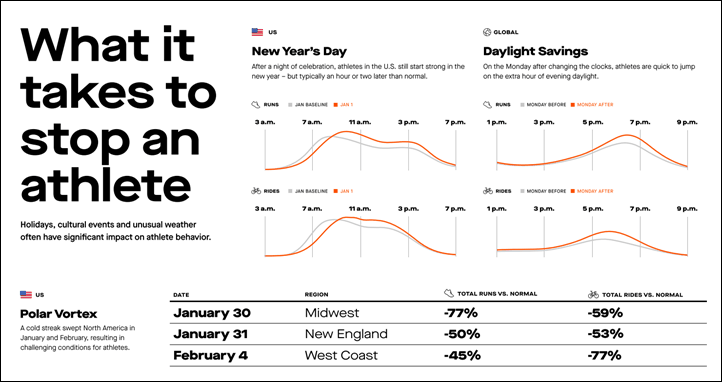 Note however, this apparently doesn’t apply to you folks in the UK & Ireland. You appear to party much harder than the US folks and simply give up on working out the next day: 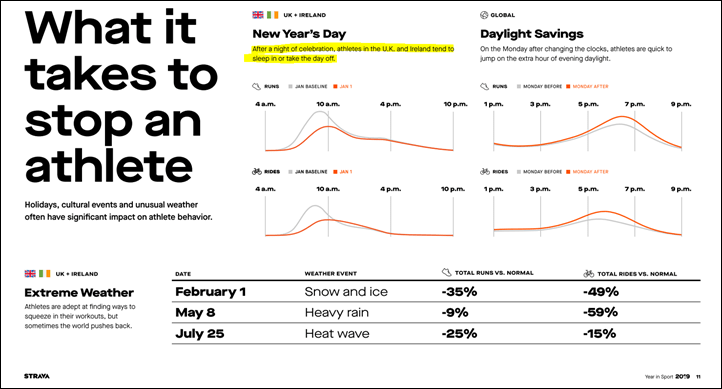 Which is exactly what the French do as well: 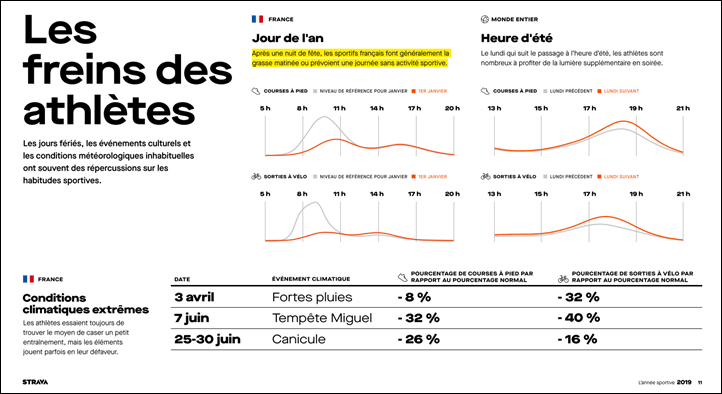 As with past years, you see the commuter stats skewed away from countries that have such regular views around bike commuting that they don’t even bother to record it with Strava. In this slide discussing the commuter gender gap they point out that Denmark has more females than males commuting. But more interesting is the Copenhagen stats.

They show about 27-31% of folks in that city will log their ride on Strava. However, we know that city-wide the actual measured number is much higher – around 62% of people commute daily by bicycle. Undoubtedly the number of athletic-focused Strava members is even higher than that. But like many other popular cycling cities – most people don’t log short commutes.

Here in Amsterdam, for example, I rarely see people logging their commutes within the city. I virtually never record my 2.8km long commute each way. I’d get laughed at if I listed that as public every single day, each way.

But, it also works the other way – if we’re looking at US numbers, then having 44% of Strava users in Portland, or 21% in LA commuting by bike is actually incredibly impressive. Way better than I would have expected. 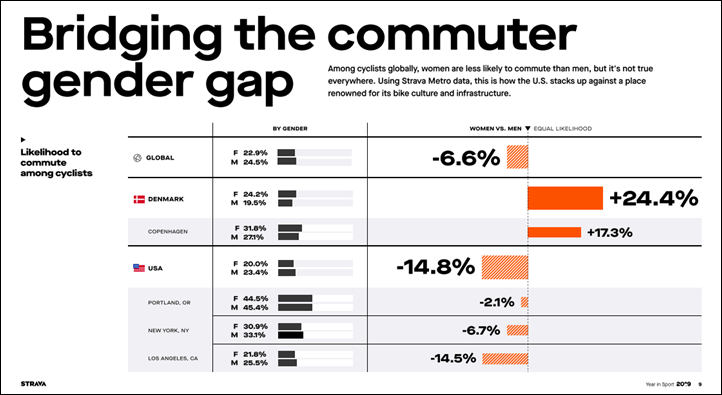 In any event, there’s a pile of other slides for those that want to go through them. I’ve uploaded the entire decks of a few countries into galleries below. First up is the US set:

And then here’s the UK/Ireland set:

And then since German readers are among the biggest groups here, here’s that set:

And finally, I’ve put up the others here: Brazil, France, and Japan.

As always, looking forward to next year. And of course, picking out just the perfect calendar for Strava.