1) One last ride on the 4iiii Fliiiight

I wrapped up the riding portion of my 4iiii Fliiiight trainer review on Saturday night after the kiddos were successfully in bed (and while The Girl was out for a walk). This time I moved the trainer out in front of the TV in the TV/play room. 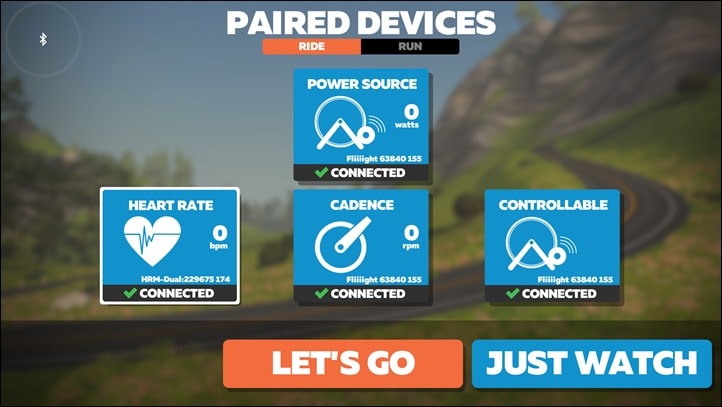 I’ve been using one of my slightly older road bikes at home in the evenings to ride, though, it’s got all the latest power meter and head unit tech on it to capture all the data I need. Albeit, I really need to remember to bring home a touch bit of oil to make it quiet again. Given this trainer is all about quiet by using magnets, my drive chain needs to STFU. 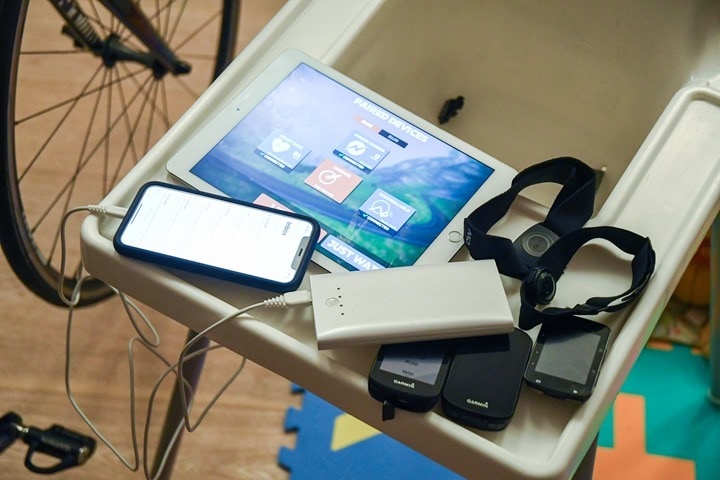 I ended up doing two workouts. The first was a Zwift ride, and then the second was a TrainerRoad 30×30 test ride I do for every trainer I review. 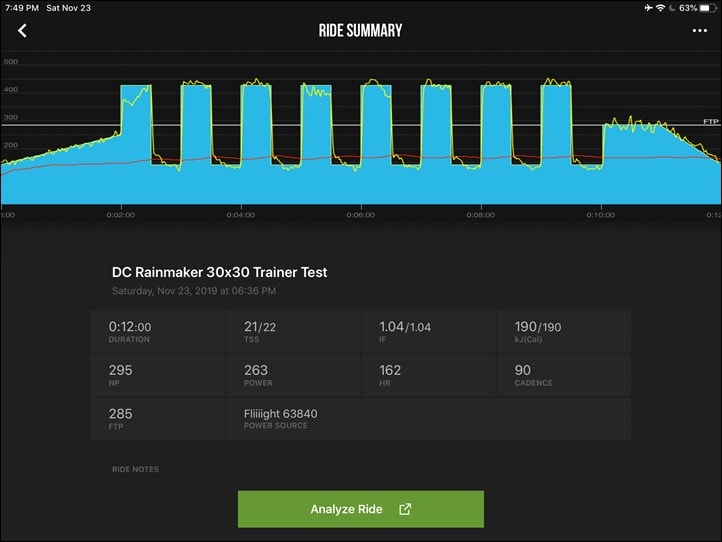 I’m hoping to get that review written up either later tonight or by morning (Apple Watch Series 5 review first, well…lunch first, then Series 5 review). There’s currently a deal that goes through the week on the Fliiiight that gives you a Fliiiight + a Viiiiva dual ANT+/Bluetooth Smart HR strap for $499 (versus the normal $599). I know a lot of you are looking for that review to make your decision. The less nuanced version of that review will be that I think it’s a decent option for ERG folks (like TrainerRoad – albeit with some limitations if you’re a more powerful rider). But I don’t see a scenario where I’d recommend it for those doing regular Zwift riding (non-workout mode), and especially not for Zwift racing. It simply can’t put out the power. But again, there’s tradeoffs. No trainer is quieter than it, and if you’re a smaller/less powerful rider, it might work for you.

There was so much riding the cargo bike this weekend. I would be able to tell you exactly how much riding, but the battery on my speed sensor (which quietly records rides and syncs rides) on the bike died a bit back and I’m too lazy to get it swapped out. But one of many trips was to the Castle to let the kids run around. We had friends in town, with one of their daughters the same age as ours.

Also, this meant I had four kids on the bike. Three in the bucket (2 toddlers + 1 infant), and one on the back (1 more toddler). I know…I forgot to get a pic with everyone from the side. Doh! 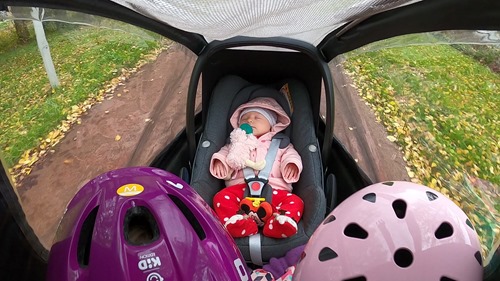 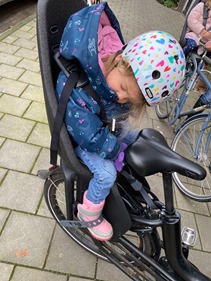 I believe that’s currently a family record for us. Lucy the dog was not there…shame. And…our destination: 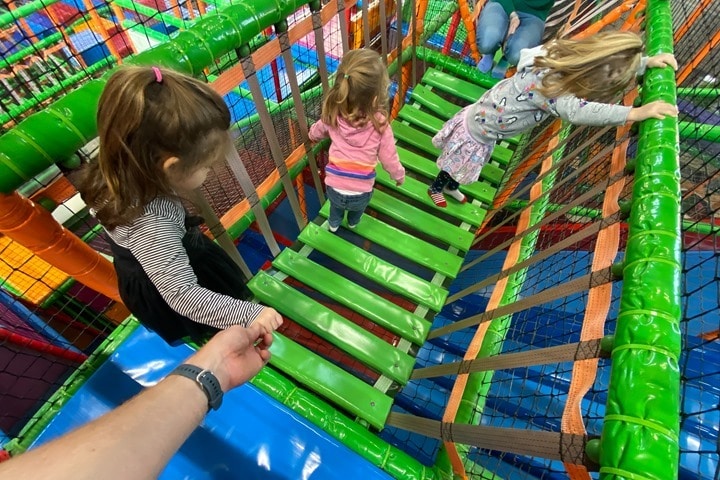 3) Riding them to sleep

Sunday morning we had Christmas family photos taken. That of course involved managing to get everyone semi-presentable, loaded onto the bike, pedaled across town, and then keep everyone semi-presentable for enough time to get at least one functional photo. Surprisingly, it mostly worked. It’s probably because we didn’t have Santa involved (this is what happens when you do). I’m sure at some point you’ll see the resulting photos up on The Girl’s Instagram page.

Afterwards we planned to take the kids to lunch at a restaurant. We actually almost never take the kids out to eat at any sort of sit-down restaurants, except at a few hand-picked pancake or similar places around town that cater well to kids. At the 1-3 year old age, it’s just a lot of wrangling rather than enjoying a quiet meal.

In any case, as we biked towards the restaurant the most amazing thing happened: 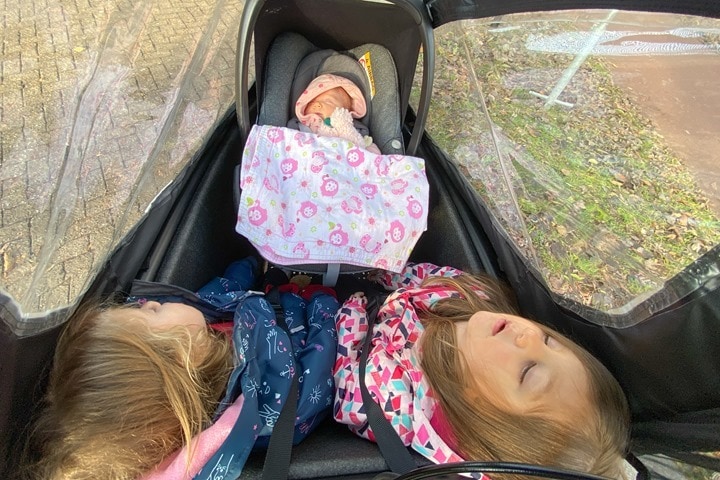 So…we kept on biking. For quite some time in fact. Doing random loops, you name it. Eventually we even stopped and took some photos by ourselves: 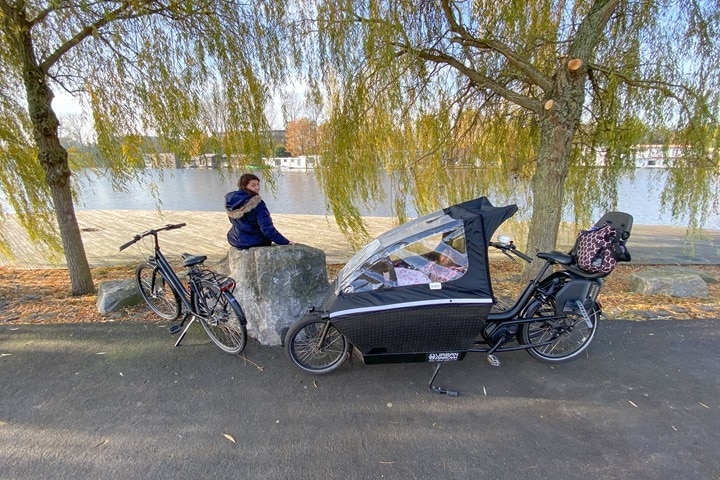 Of course, approximately 7 seconds later P1 woke up, who then woke up P2, and then chaos ensued and P3 awoke as well.

Sigh. Off to get food we went.

Sunday afternoon (post-food) I solicited volunteers to ride to IKEA with me.

None took the offer.

Both of the toddlers were drafted anyway. They were operating under the mistaken assumption that if they stayed home they’d be allowed to watch movies instead. Umm…no.

I’d been slowly collecting a notepad list of things I needed. Mostly minor things, nothing of the large or bulky variety. So off into the sunset we pedaled: 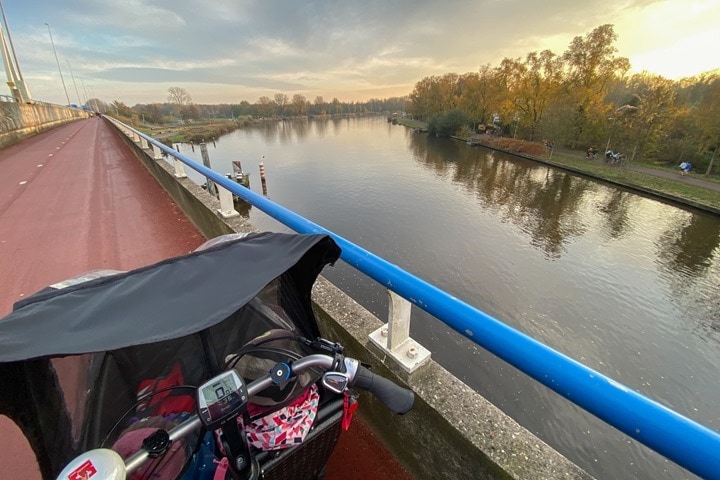 It’s roughly a 35 or so minute ride each direction, passing through city, farmland, and then back into a city-ish sort of area where IKEA resides. 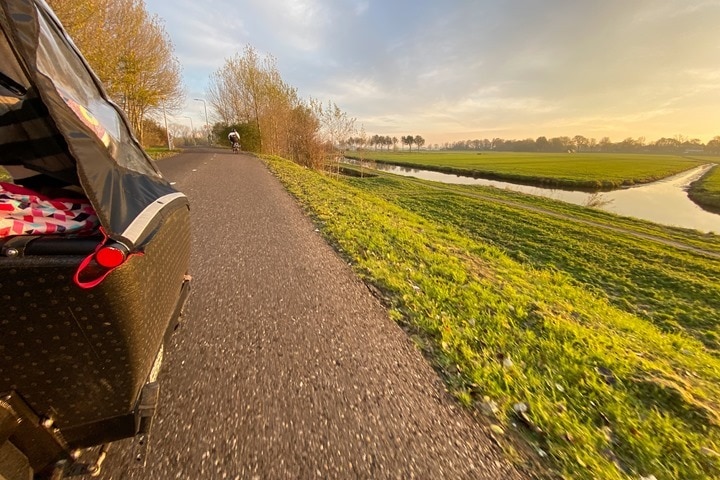 Inside, they got to wander like drunken bumblebees through the kids’ area for a few minutes before I eventually quarantined them in a shopping cart in order to make forward progress. 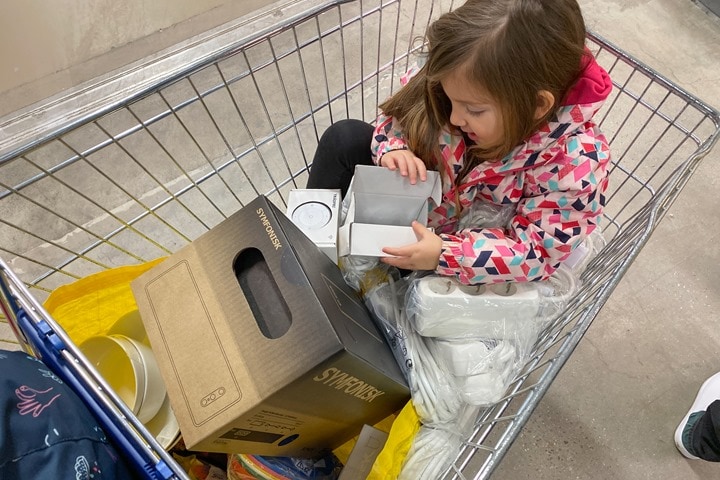 I picked up another IKEA/SONOS speaker for the downstairs portion of the studio, as well as a bunch of power cords I needed for later this weekend at the Open House. I probably could have ordered them off of Amazon, but this was instant-gratification and pretty cheap anyway. Also, since when did IKEA start selling solar panels? 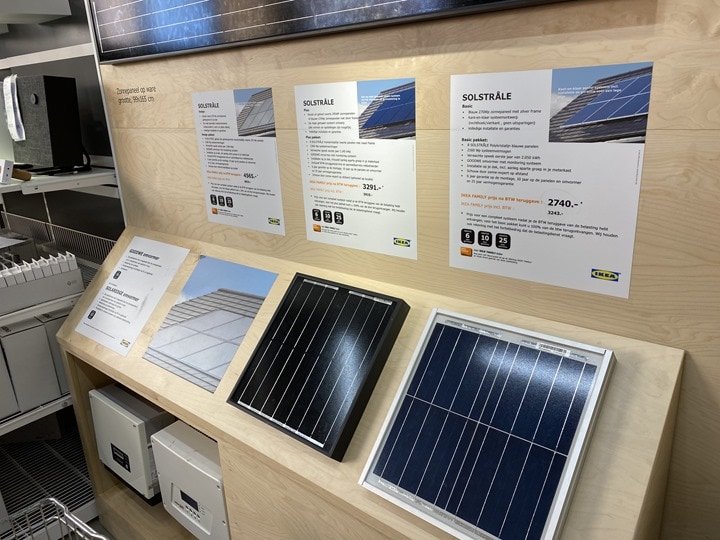 After that, we pedaled on home. 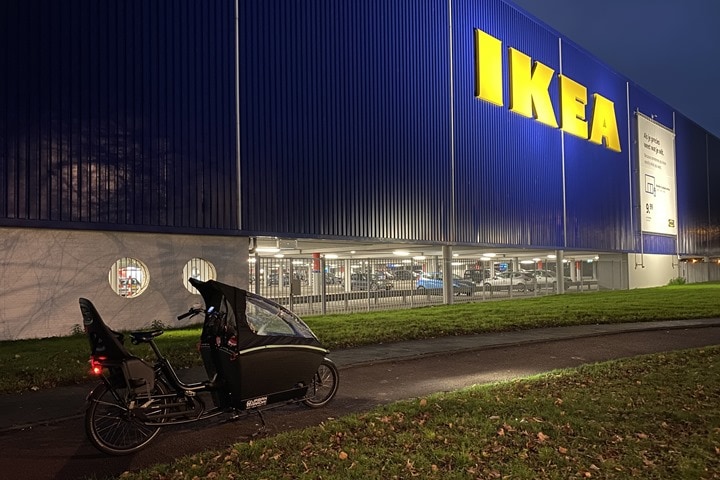 It was dark by now of course, but the kids didn’t care. They were happy inside the cover of the bike, singing songs and watching the world go by. 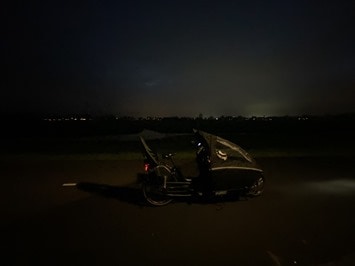 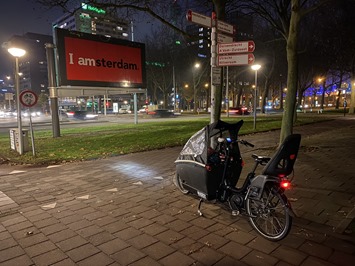 To them, this *is* their minivan. We don’t have anything else. We have snacks under their seat, along with smaller kid’s water bottles, extra blankets if needed and the whole bit. Heck, I put my phone on the Quadlock mount and let music stream down into the rest of the bike as we sailed through the night. They don’t know any different.

After the kids went to bed Sunday night, I zipped back down to the DCR Cave to pick up the Kinetic R1. I had received a new beta firmware update for it to try (to address some lingering accuracy issues). Loaded it up in the bike and pedaled back home: 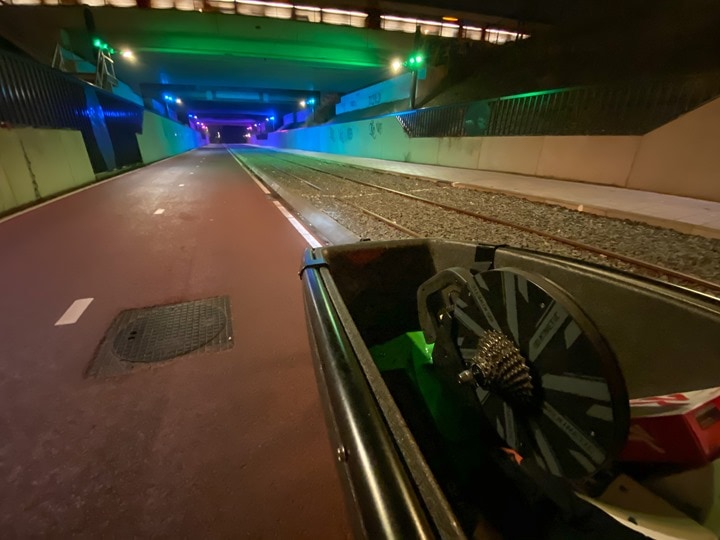 Then switched the bike from the 4iiii unit to the R1 and got everything all configured and ready. I was going to do a Zwift race, but of course with 70 seconds until the race started, the Zwift app froze/hung on the iPad and I couldn’t get it revived in time for the start. I swear – the number of times the Zwift app freezes during or just prior to races is astounding. It virtually never happens to me in any non-race scenario, whereas for any race/event I think I’m close to like 30% of the time right now.

So…with that failed, I just did loops around NYC instead. Win some, lose some. 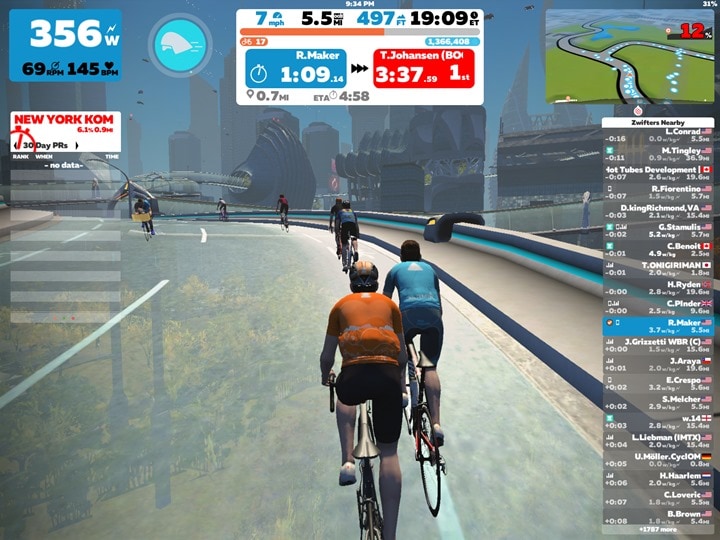 Collected a bunch of data, and then sent it back to Kinetic for analysis. They’re going to dig into it this morning. 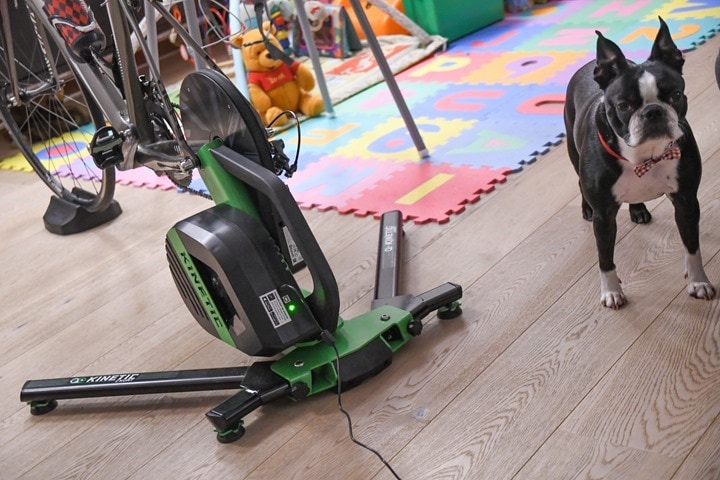 With that, it was 10PM and time to sit back and relax. Oh…wait, no, that didn’t happen. Instead, The Girl and I sat down at the kitchen table and loaded new sales into the sale page/database for another two hours while eating peach ring candy (including Apple Watch Series 4 and 5 deals, craptons of Fitbit deals, DJI deals, and GoPro deals…among others).