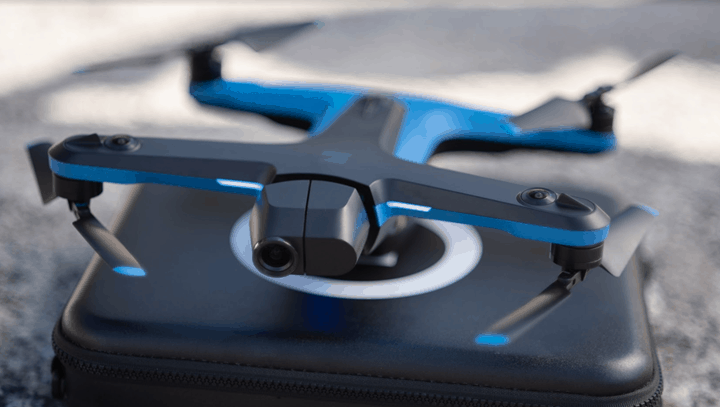 Yesterday Skydio announced their Skydio 2 drone, following their previous R1 drone about two years ago. Now I know, some of you non-flying-enthusiast are probably like ‘Another drone?’ – but like the R1, this one is all about sports. When you think of the phrase ‘You had one job’, this unit has one job: Autonomously follow you doing cool sporting stuff, using it’s array of more than a dozen cameras. No remote controls, just tracking you Terminator style.

And as I showed in my Skydio R1 In-Depth Review, it’s scary good at that. Don’t remember what I mean? Check out this tweet from 18 months ago of mine (I know, I’ve showed this before, but this is the most succinct way to explain it):

But that was all the R1, so what’s the new Skydio 2 about (btw, naming wise they ditched the ‘R’ identifier, now it’s just Skydio 2)? Well, by the sounds and looks of it they basically addressed almost every complaint about the R1 in the Skydio 2. So let’s detail those out a bit. 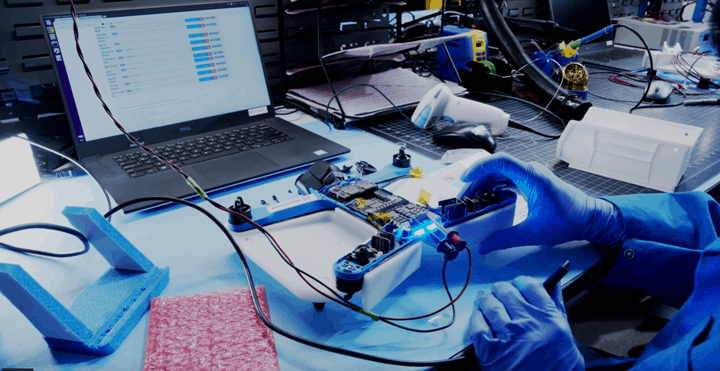 Now, back in my R1 my in-depth review, it all could basically be boiled down to five bullet points:

1) Holy crap this thing tracks crazy well, except in rare scenarios
2) Holy crap it’s waaaay too big to transport in a backpack easily
3) Holy crap it’s waaaaay too expensive at $2,500
4) Grr….the image quality is pretty poor comparative to the price point/competitors
5) Sigh…it’s really only a sports drone, and can’t be used in any other way meaningfully for regular shots

And, while I doubt they were channeling my review specifically, I think they were instead channeling the interwebs at large in those requests. So, bullet by bullet, here’s what’s different or changed to address that:

1) Now you can wear an optional beacon for cases where dense trees block visual access to keep tracking
2) It’s a fraction the size now, roughly that of a stack of iPad Pro’s versus a just about a pool table previously
3) It’s now $999
4) The samples and downloadable untouched footage look great…but I still wanna see it hands-on
5) There’s now an optional controller you can pickup for $149 to use it like a normal drone

So, let’s get into some of the details of those a bit more. Previously, the u 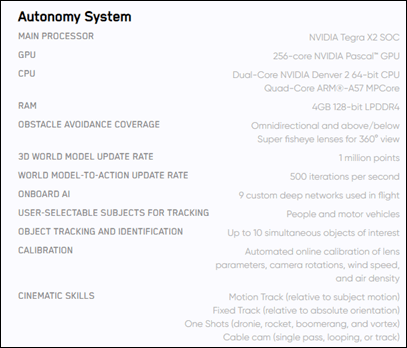 nit had 13 cameras to track you, one of which was used to record the actual 4K image. Now they’ve reduced that down to a mere 7 cameras, 6 for navigation and one for capturing the imagery you’ll upload to MySpace and Geocities. Like before it’s really the computing power that’s the black magic that makes it all work, detecting objects in real-time and computing how to fly around them while concurrently tracking you without any assistance. However the previous cameras were 1080p, and these are now 4K, which gives them dramatically more detail than the 1080p cameras.

For those of you that are into computer systems, you can briefly contemplate the specs at the side there. Keeping in mind that all of these are on board, this isn’t some cloud-based system it’s leveraging behind the scenes.

All in it’s tracking options at 500 times per second, which is likely why the company claims that it’s the “least likely to crash drone on the planet”, going onto note that “we back it with an even more amazing warranty. If you’re operating your Skydio 2 within our Safe Flight guidelines, and it crashes, we’ll repair or replace it for free.”

I checked to see what the heck that ‘Safe Flight Guidelines’ means, and while I couldn’t easily find a document by that exact title on their site, I did find some rough tips labeled safety – which I suspect is what they’re referring to. There’s nothing in there that’s concerning to me from a warranty standpoint except the thin branches clause, which may seem a little bit ambiguous, and is the singular item that the R1 had issues with. Though, in the case of the R1 in the 1-2 times it did find some super thin branches/twigs it basically bounced off of them. But the R1 also had propeller guards whereas the Skydio 2 doesn’t. So…I’d like to see a cleaner listing of ‘Safety Terms’ that matches the same terminology across the board to understand what is or isn’t considered ‘Safe Flight Guidelines’. But that’s stuff they can sort out over the next month. 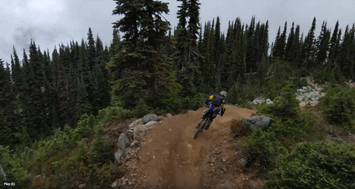 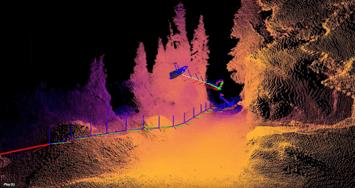 Next, the size is pretty significantly shrunk, down to a stack of iPad Pros. That’s still not as small though as the DJI Mavic Air or DJI Spark, but it’s at least in the right ballpark to be feasible for most backpacks. Previously I found a single backpack that actually fit it, so I could use that, but couldn’t put anything else in the backpack. The new unit measures 223x273x74mm including the battery. Also, now it gets 23 mins of flight time versus 13-14 mins I previously got. While I know 23 mins of flight time seems low if you’re not into drones (and it is compared to the ~30 mins of the DJI Mavic 2 series), the reality is that I’ve found that’s actually a lot of time to gather the scene you want to capture. More than enough time for a single ski run, or a single downhill mountain bike track, etc…

The price was covered previously at $999, but there’s also two separate optional controllers (your phone can also control it, for free). There’s a dedicated Skydio Controller that costs $149, and then the Skydio Beacon that also costs $149. 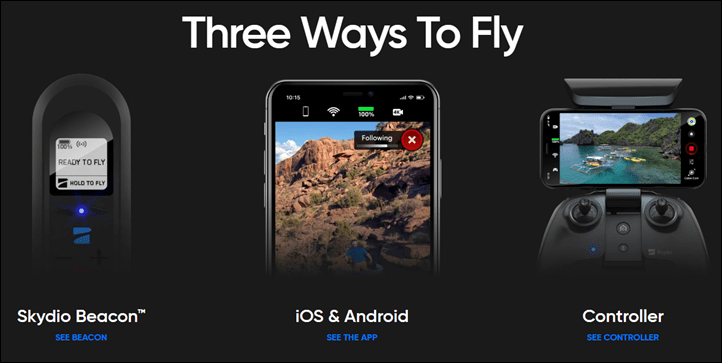 The regular controller is fine for normal control like any other drone. But it’s the Beacon that interests me, since that follows what the AirDog and Staaker did in the past which guaranteed that you didn’t lose the object you’re tracking. The wearable beacon communicates in real-time, up to 1.5KM, between you and the drone with your current GPS location and height. The idea being that if you go through a grove of trees that the drone can’t follow due to constraints, it can go above the trees and use the beacon to keep tracking you. 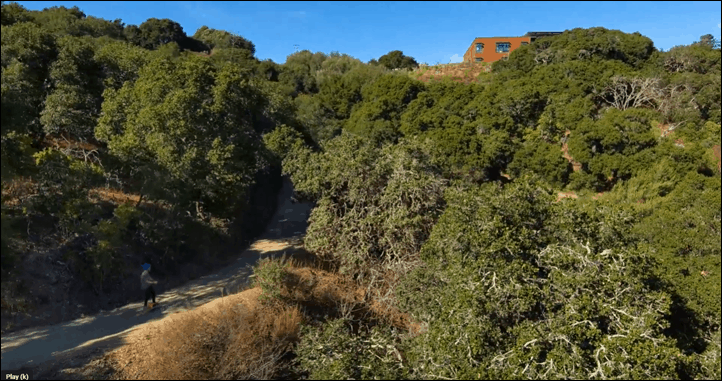 The key thing I’ll be looking at when testing this piece is whether there are footage jitters in the hand-off between camera object tracking recognition and GPS beacon tracking. I’ve found in testing with other drones that sometimes you’ll see weird drops in beacon-type scenarios where you get skips in the footage tracks. So it’s definitely an area I’ll be diving into deeply – because if Skydio can pull it off, it’ll have the potential to create really astounding footage in different views.

Speaking of which, the Skydio 2 Beacon has buttons to change viewing angles on it, similar to that of other transmitters on the market for other drone companies (though, most of those companies are no longer in business). 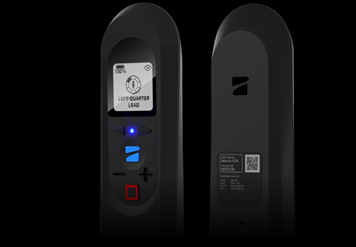 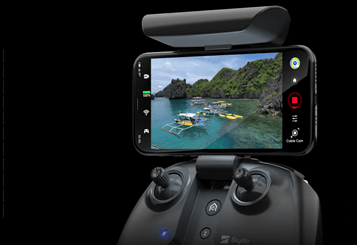 In the gigantic press pack, they included testing from an independent lab that showed image quality at an equal or higher level than DJI’s much higher end Mavic 2 Series drones. Of course, it’d be doubtful that they’d have released the report if it says otherwise. And of course, Skydio paid for the lab testing, still, it’s hard to argue with the coloring/detail aspects of the full 36-page PDF report which includes the images. 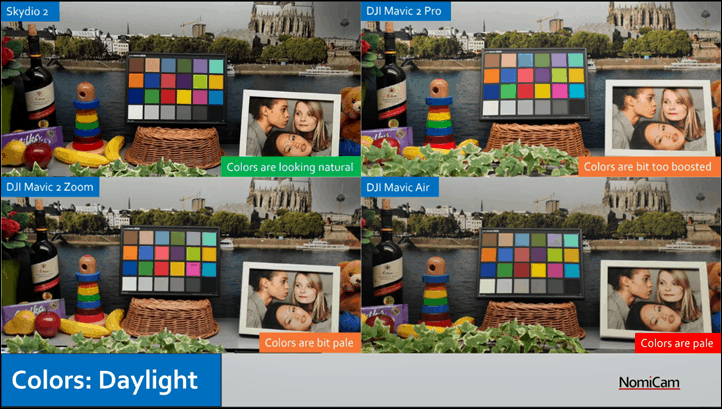 Still, the report was indoors – which from having more drones than I can count doesn’t mean much. Things like stabilization matter a ton in the air (though, that was solid on the R1), and matter to image quality. If the sensor is having to deal with vibrations or other stabilization issues then quality degrades quickly. And DJI is known for their astoundingly good stabilization. Still, I’m optimistic.

Finally, for lack of anywhere else to note it – they also bumped the speed limit up from 25MPH to 36MPH, which basically gets you beyond the likely range most cyclists would hit except in steep/sustained descents, though keep in mind with the Skydio Beacon it could basically catch back up to you down the road if it needed to. Again, all things to test for sure (and, in a safe way). And the company claims its now 50% quieter – which is ideal since the last one was loud as fudge.

I know I’m a bit aviation-geeky here, but most of the tech we’ve seen this year in the sports realm is incremental at best – and a lot of it frankly isn’t working super well this year. I’d argue that new indoor cycling trainers across all trainer companies this year have been a complete $h!t-show initial teething issues – and I’ve got a feeling we’re about to see the same thing on indoor bikes. GPS bike computers, activity trackers, and watches were all mostly incremental updates this year. Again, evolutionary and not revolutionary.

And there’s nothing wrong with that – assuming things actually get more stable. But the inner-geek in me is excited about stuff that pushes the boundaries. Or just the stuff that makes for cool Strava activity/workout pics (like this one I’ve oft-linked to). This definitely qualifies under that boundary.

However, that doesn’t mean it gets a pass once a review unit lands on my doorstep (apparently) sometime next month. If it sucks, you’ll know that as always. I’ll be looking at a few key things: Specifically the image/video quality (which was sub-par on the R1), and also the tolerance levels for tracking in tighter tree conditions (too conservative on the R1). Further, is the battery life actually going to hit the times advertised? And how well does the wearable Beacon actually work?

And most importantly: Will it replace my DJI Mavic Air as my go-to drone?

I’m not sure yet, but in a rarity, I’ve already placed my pre-order for one. Hopefully it lives up to the expectations and hype, things I’ll find out as part of my review cycle. Giving me plenty of time to cancel it if not. Until then, I’m excited.