The Rivet: First Look At This Potential Zwift Competitor 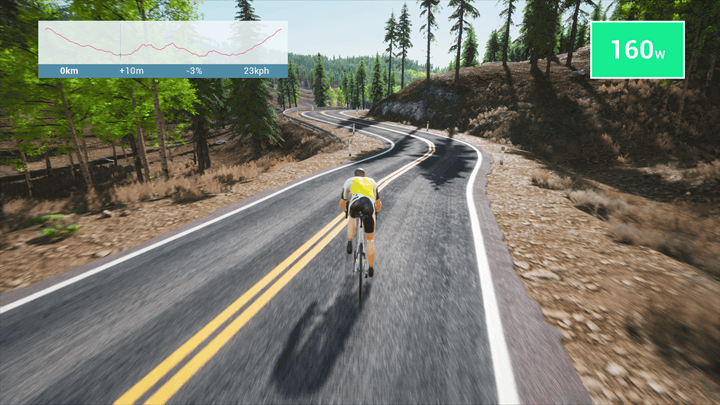 To be fair, using the term ‘Zwift Competitor’ might be a bit…early. Like looking at a pile of ingredients on a table and calling it a cake. But damn, it looks pretty. And everyone likes eating cake batter anyway. Also, it was responsible for a fair bit of distraction from my planned morning. Sorry MARQ in-depth review.

Anyways, back to that pile of ingredients. Lama shot me a text earlier this morning asking if I’d seen the Rivet cycling dude or not. After an initial Googling fail landed me upon a bad-boy heartthrob cycling t-shirt store, I found the [Update: Link removed, as site is now dead and taken over by NSFW content], which in turn got me distracted watching his Twitch feed. The one-man-band of a developer was doing a 24hr ride to kick-off the launch of his platform, named The Rivet. All while his social media manager (aka…friends), supplied him with a Greek salad and noodles on the bike to keep him fueled.

At first I was impressed by the game’s graphics, based on the Unreal engine. But to be honest, I think I’m actually more impressed listening to him answer the sprinkle of occasional questions into the chat window from the assortment of 1,000 people that have stopped by to watch. Almost every question prompted a flood of ideas he has to implement, or things he doesn’t quite think are perfect in the game yet. All of them well thought through.

At present, the biggest ‘selling’ point, if you will, is steering and braking, plus of course the graphics you’ve already seen above. The biggest downsides is essentially missing everything else. But so was Zwift when it first started, at least compared to today. So after watching and listening in the background for an hour or so, I decided to jump in and give things a whirl.

And if text and photos are more your thing, then onwards into the rest of the post!

As of current, the application is split into two pieces: The main app that runs on a desktop computer (Windows or Mac), and then the companion app that runs on your smartphone (iOS or Android). You’ll need both pieces in order to make it work. In my case I used the Mac version on my computer, and then installed the iOS app on my iPhone.

Once that’s done you’ll have to do a bit of geekery to display the IP address of your computer and then insert that into the phone app, so it can find its desktop friend. At which point you can connect the two. Obviously, down the road that’ll happen automatically. And ideally, any absolute dependency would go away. Though the current phone requirement is for steering. But more on that in a second.

As far as creating a username goes, that’s not there yet either. Basically this is kinda like going into an arcade and just playing on the machine as-is. The platform supports pairing to smart trainers and power meters, with plans for other sensors shortly. They’ve also already lit up and tested smart trainer control Tacx trainers. 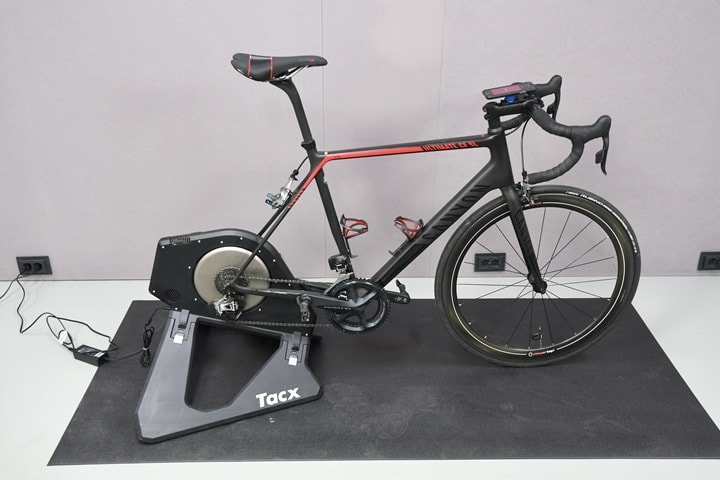 So I dragged out a Tacx NEO that was sitting nearby and got it paired up to the companion app. You’ll scan for nearby BLE power meters.

Then I needed to get my phone on my handlebars. That’s because the app uses the phone’s accelerometer for steering and control of your line. In my case I just used my Quadlock mount/case on my bike and I was good to go. 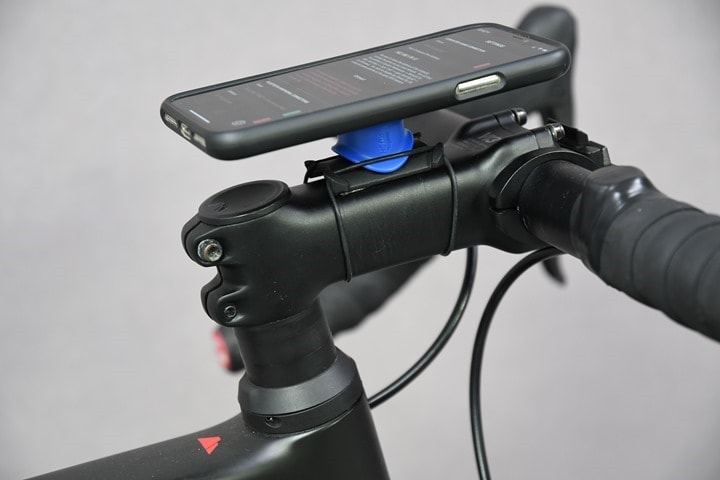 With that, I started pedaling. There’s honestly not a ton of other configuration options at this point, aside from a slew of graphics related ones.

There’s a singular course right now, which is a hilly and forested mountain route, which is what I’d be riding. And at present the only camera view is as seen here, due to Patrick’s (that’s the founder/one-man-band) concerns around steering and having a camera in the wrong place could cause confusion. 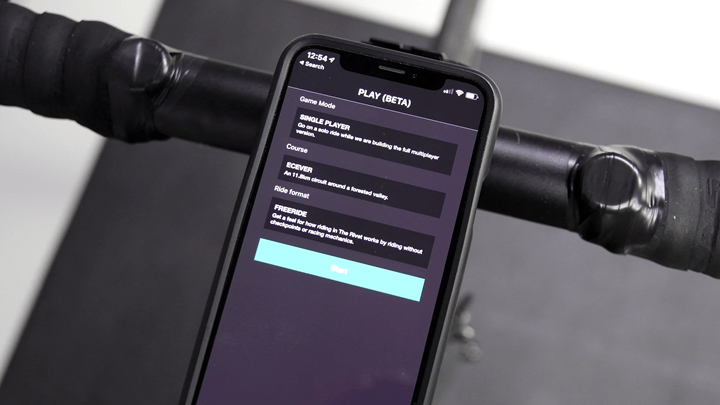 There’s really only two core functions you’ll need to master, the first being steering. It’s pretty easy, you just turn your handlebars. Of course, if you’ve got a front wheel block, that might be slightly more difficult, but that’s a problem for a different day. 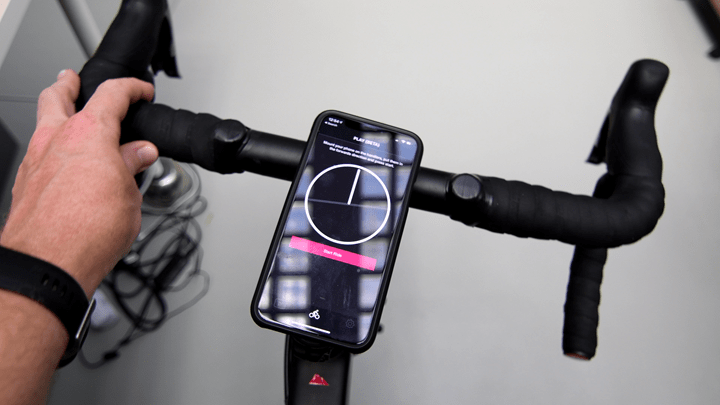 I didn’t have too many issues with steering, but I also didn’t do any descents, which might be more sensitive to it given the faster speed. Of course, the concept of steering isn’t new to indoor training. Tacx had it years ago in their Tacx Desktop suite and their steering utility. But beyond their apps there wasn’t any mainstream adoption. Still, I think it’s inevitable that steering will make it into mainstream platforms at some point.

The second is braking, which you can do by simply tapping the gigantic red ‘BRAKE’ button on the smartphone app: 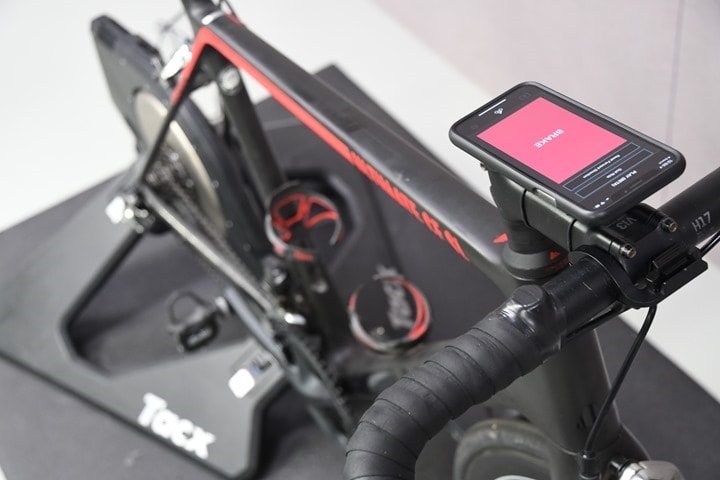 In the event you fail at the only two things you’ve got to do (brake and steer), then you’ll eventually fly off the road and subsequently crash. When you crash you simply reset back to the middle of the road perhaps 50-100m prior to the point you crashed. 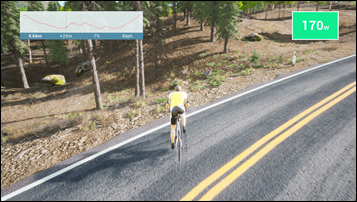 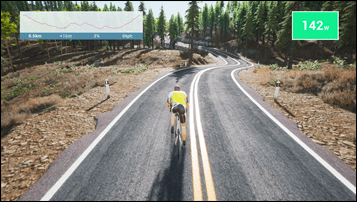 Otherwise, you simply ride. The graphics look great, even when not put at their highest levels. You can see them below, as well as in the video up above.

Of course, the downside is there is no other gamification or additional features at this point. The focus has primarily been on the physics of the game and the underlying engine. Plus of course the scenery of the 11.8KM route. 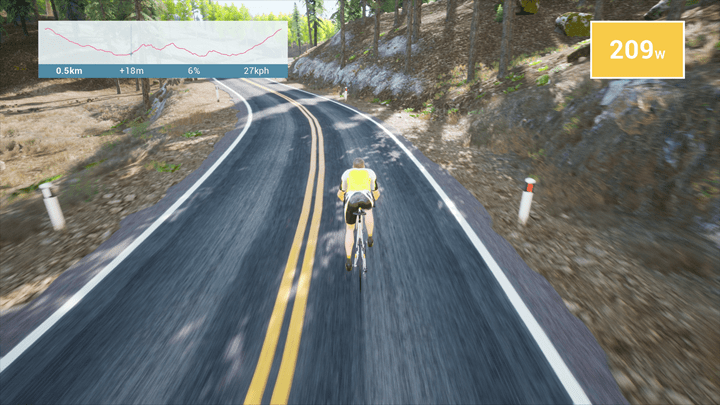 It’ll be interesting to see where the platform goes. For example, during his 24hr livestream, the game was actually running remotely in a datacenter on a remote computer there (‘in the cloud’). You can see it looks fantastic in the Twitch stream, of course, at present that’s not required. But the idea of it is something that is quickly gaining momentum in the gaming industry, with projects like xCloud and Google Stadia. He noted he’s excited about this trend and “totally convinced that’s the way everything is going”, so here’s to hoping that the company invests earlier in that space (they’ve already applied to be part of Google’s Stadia program) as a way to potentially have a leg up on their competitors which haven’t really dug into it yet. But at the same time, he pointed out that the business/monetization side of some of these platforms isn’t super clear yet either.

And he also accurately notes that there are elements of ‘friction’ that make these setups a bit more complex, such as indoor trainers that need to connect via Bluetooth or ANT+ from your living room to a cloud platform. Obviously, he’s making it work today for the demo/livestream. But whether or not that scales at the speed required in full-on high stakes racing remains to be seen.

Back to the example of when Zwift creator Jon Mayfield first posted Zwift screenshots to the Slowtwitch forums, versus what Patrick posted today, I’d say Zwift was a bit more refined at that point (including things like summary screens, computer generated racers, and more). On the flipside, Rivet has the advantage of a far more cohesive trainer industry compared to 6-7 years ago, and a far better educated consumer base to work from compared to then. Not to mention easier access now to investment funding that ultimately drives employing developers. 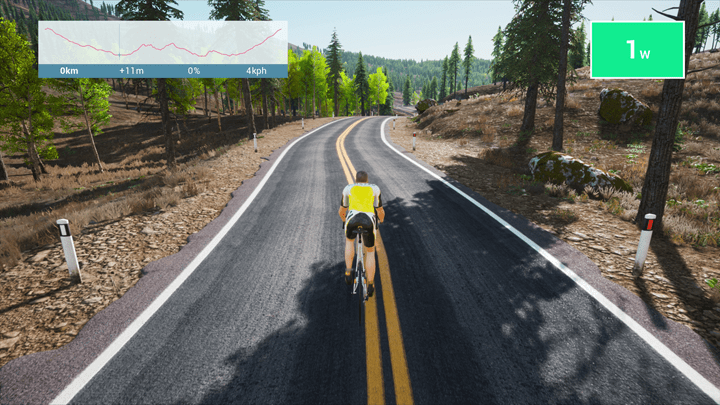 As the title of this section implies, it’s all about what’s ahead of the company. As it stands today, no, they don’t really have a completed product. But they do have an idea. And frankly even more importantly – they have a dude that’s fanatical about the development of the platform. Seriously, the guy’s mid-way through a 24hr ride on it as part of his one-man-band promotion of it. Yes, you can watch it live here for another few hours.

Realistically what The Rivet needs is investment funding and a gaggle of developers. Once they have that, they can go forth on adding all the features they need to be a legit Zwift competitor. Stuff like adding in multiplayer support (planned by winter), as well as creating the gamification draw that Zwift has nailed. Certainly, one doesn’t have to gamify everything, but if the company is looking for investor money, then realistically that’s where investors want to ensure the platform has something that’s going to keep significant quantities of people addicted to it (and paying for it).

Like I said in the video, nobody is going to go and cancel their Zwift membership today to jump to Rivet. Though, I think for geek-inclined folks it might be fun to take the course for a lap. And for investors to judge whether there’s enough of a business case to help fund it. I know from talking to numerous people in the industry, there’s huge appetite to help fund Zwift competitors – especially ones that are positioned like this without significant overhead.