Mid-last week we loaded up the family and jetted across the pond for a couple week visit to both of our families.  In this case, they were both conveniently currently located in Florida, making the jaunt between them far less painful than usual (as previously they were separated by a more complex and longer series of flights than crossing the Atlantic itself).  So as always, here’s a blend of sports tech and not from this past weekend on the eastern coast of Florida.

Friday late afternoon The Peanut had declined to take any naps, alongside opting-in to wake up at 2AM that morning. As a result, we needed her to fall asleep even if for a brief bit so that dinner wouldn’t become a food fight, and ultimately paving the way to a successful bedtime.  Our solution? A short 5K run in the stroller.

Usually does the trick every time. 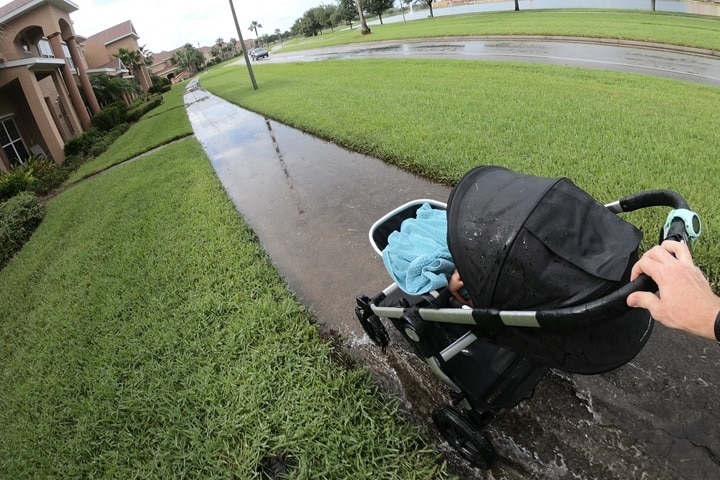 And sure enough, with 8 minutes of running, she was out. This despite the pouring rain (fear not, warm rain, it’s Florida after all). 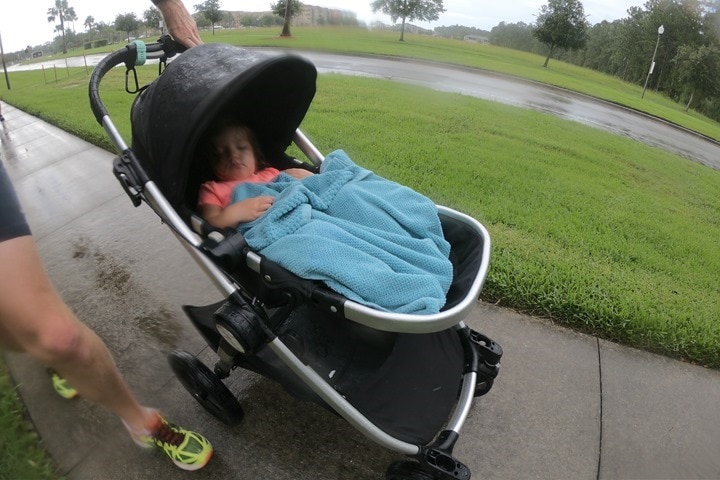 Of course, being Florida, it’s also sunny a mere 20 minutes later too. That’s just the way this state rolls. 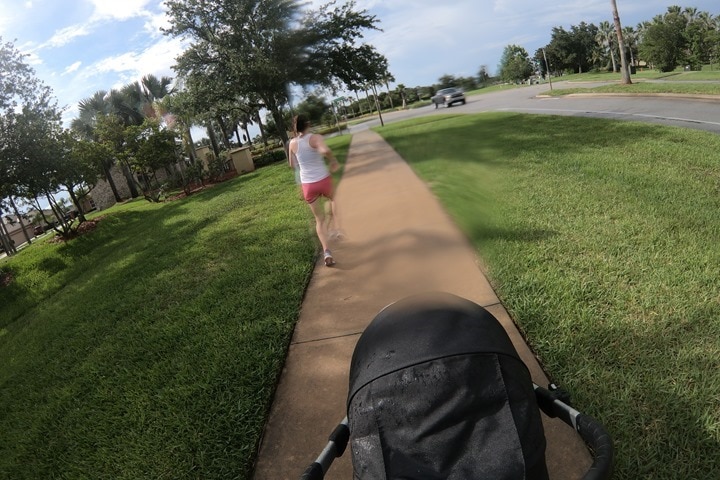 Albeit, the GoPro didn’t get the memo on the sun coming out – so raindrops still adorned the lens.  Overall, a nice little pre-dinner run.  And best of all? The Peanut then stayed asleep for another 90 minutes or so. #ParentalWinning

2) Assembling the bike with new parts 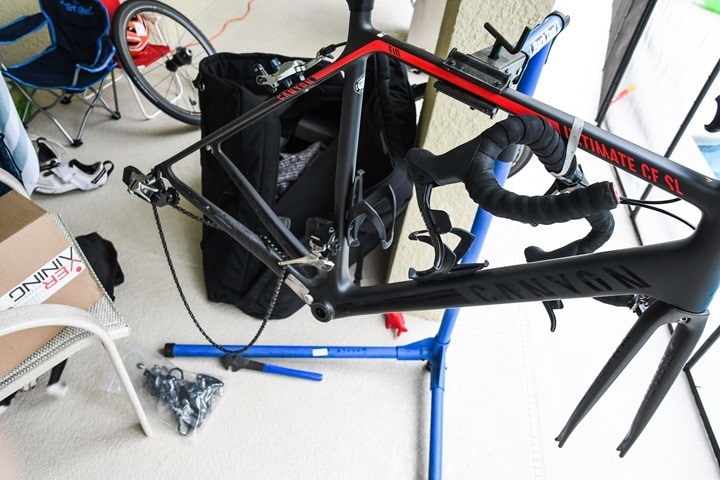 Since I’m in Florida a couple weeks, I took my bike with me. This allows me to test various things, especially important as we ramp up to Eurobike less than a month away.

As part of those testing efforts, I actually switched my crankset over to a Stages LR (Shimano Ultegra edition).  The reason for this is that it gives me more flexibility with a variety of other power meters that are Shimano-friendly.  Normally I run a Quarq DZero in the crankset position.  Since I ordered the Stages in the US, I actually packed up my bike without any crankset on it for the trip across the pond.

Thus I spent a few minutes getting it installed. 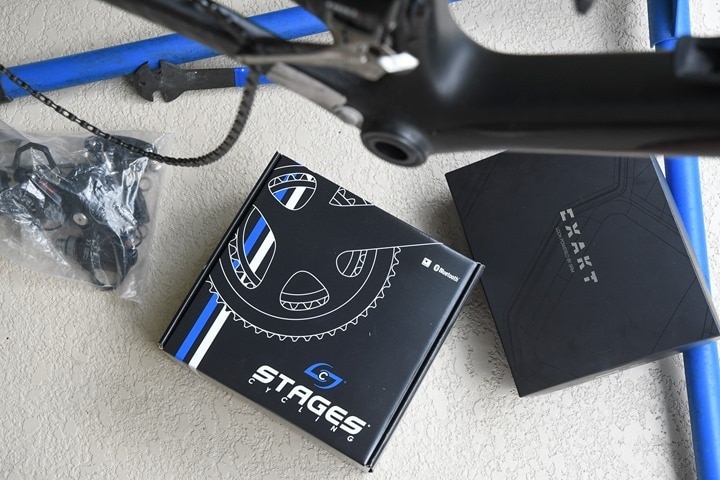 [DCR Reader Test: Exactly how many power meters are pictured in the above photo (or, implied within the box)? Power meter names required.]

And then I spent more than a few minutes cleaning my bike.  My Dad had all sorts of cleaning products in the garage, and turns out some of those made my bike super shiny. Perhaps I’ll consider doing this more often.  In particular, I used a combination of the below. I’m sure others work just as well, these were just available and functional. 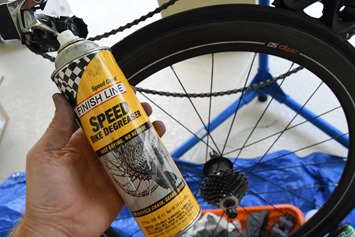 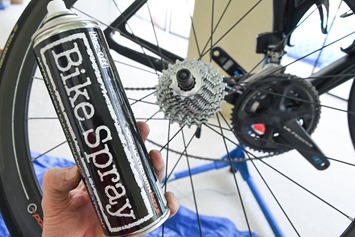 Not only did my Dad have all sorts of tools, he also had a chain cleaning tool and various cassette brushes.  Atop that, even the above-seen Park Tools bike stand! Heck, I don’t even have a bike stand.

(No, really, I don’t actually have a bike stand. With 20+ trainers handy, those generally work just perfect for me working on my bike.)

After that was done I tossed on a set of different pedals as well. Just to round things out. 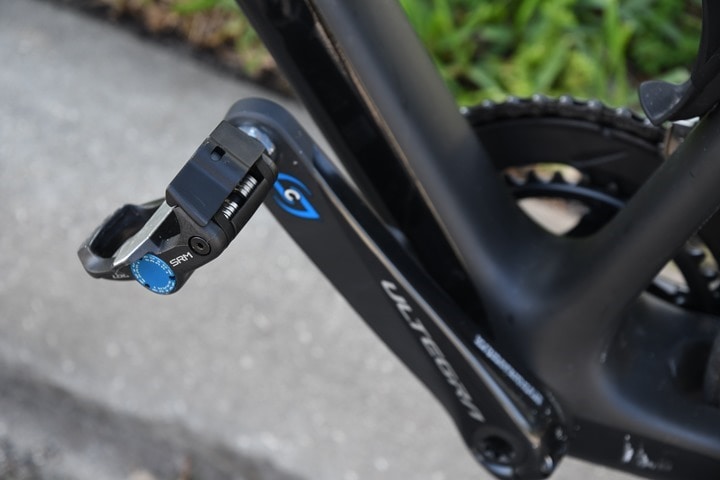 And then a few different head units and I was ready to roll.

Longtime DCR readers know that anytime my Dad is involved in meal prep, there’s bound to be good food. Excellent food. And above all: A ton of food.

With each night effectively the culmination of a day’s worth of cooking, the last 4 days have sent everyone to bed well stuffed.  As a small preview of that, just from Friday and Saturday night, we’ve got home-made pizzas (including the dough), which were done on the grill.  But lest you think it’s just gas under that pizza stone, there’s also woodchips on the left side, making it a much more smoke-filled venue (albeit, including the patio). 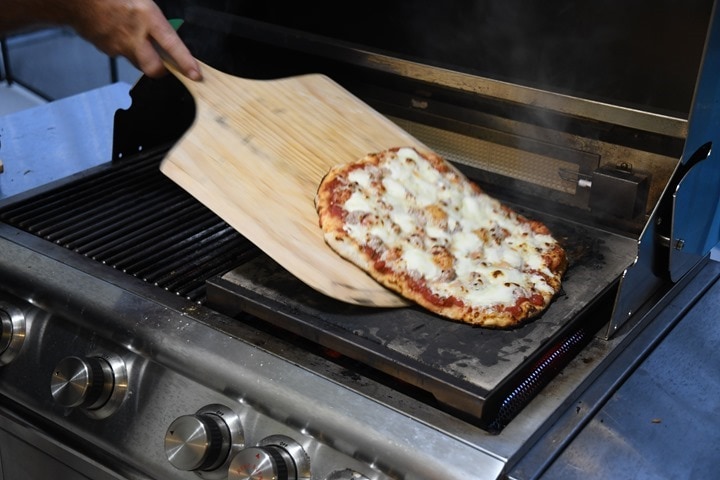 The next night there was ribs which slow-cooked on the grill and smoker for half the day.  My Dad is seen here spreading some of the mop on them at regular intervals. Of course he made that too. 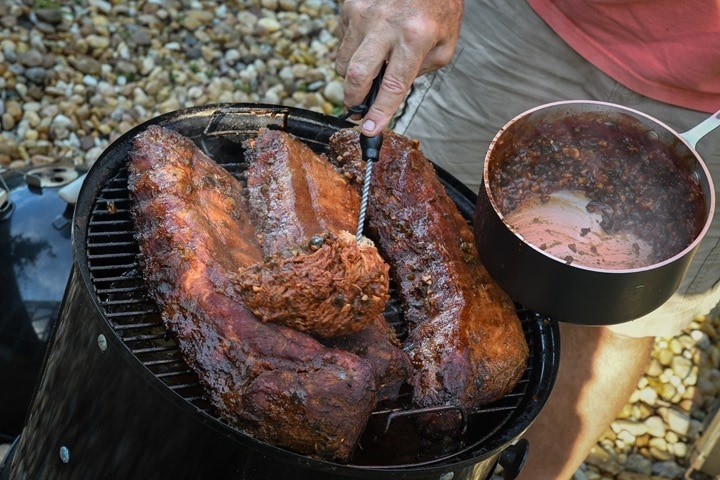 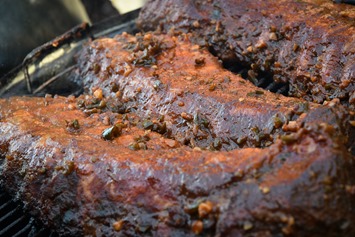 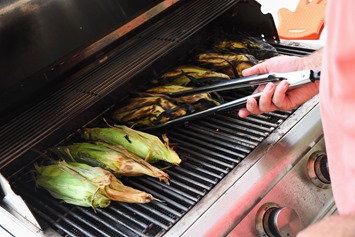 And while lacking photos (how?!?), the previous night included a fresh hand-made tagliatelle and bolognese pasta, complete with pancetta from the FLOUR+WATER book (interestingly, Williams Sonoma published the specific recipe here). While I’m currently under a ban (from The Girl) from purchasing further cookbooks for our home, if I could purchase one, this one would be it. Without question the best pasta-specific book I’ve seen in a long time. Thankfully, current said ban does not include any prohibitions regarding writing down the recipes.  Also, it’s unclear if the ban would include me ‘borrowing’ said book from my Dad and then backfilling his book. Hmm…

4) A Space Cadet of Sorts

Sunday morning I finished up prepping the bike and headed out for a ride along the coast.  It seemed like the safest of my available roads in the area, especially since a chunk of it was National Park with only one entrance in, thus limiting traffic considerably (especially early in the morning).  I parked about 6mi/10KM away from the entrance and then rode towards the park. 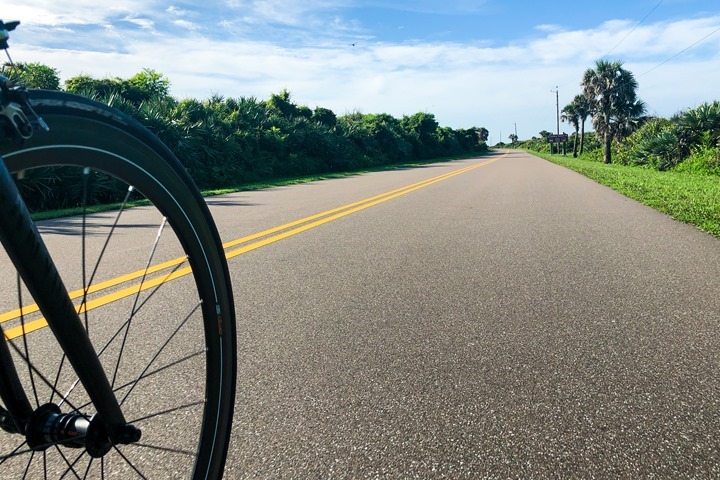 The park was great, not a single car passed me till my turn around point.  Just empty roads near the beach. 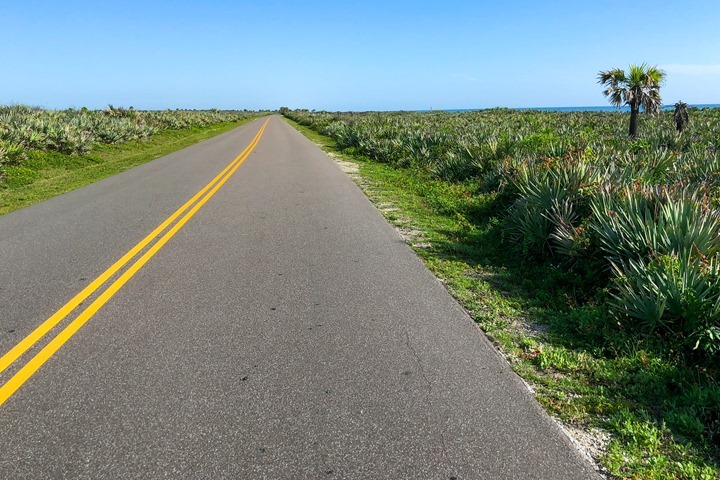 At some point during the ride I came across a white line pointed across the road. This marked the start of the unbelievably massive Kennedy Space Center property, home to NASA and other rocketry entities. 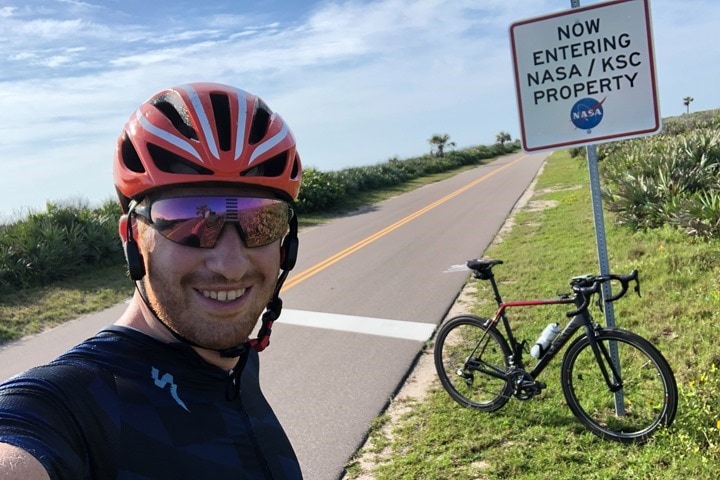 Here’s the Strava link for those interested on exactly where I was. Oh, and good (albeit boring) news: No spacecraft launched during my ride.

5) Just hanging out with family

Above all, we spent the weekend just hanging out with family. Having the grandparents around for Peanut #1 and Peanut #2 is great, and the kids love hanging out in the pool.  Or, when it was pouring out (a common occurrence), then playing indoors. 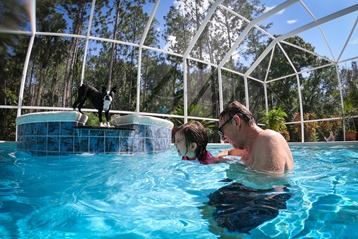 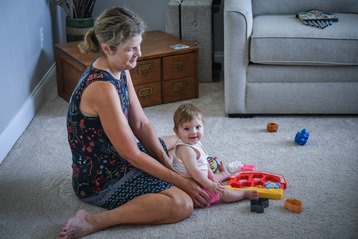 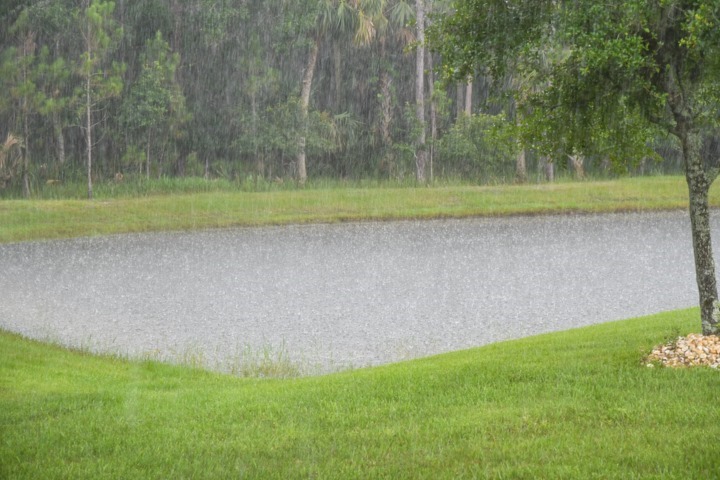 Thus, we did a lot of that. Chasing after the doggie (fear not, Lucy made the trip!), splashing in the pool, and just lounging around. 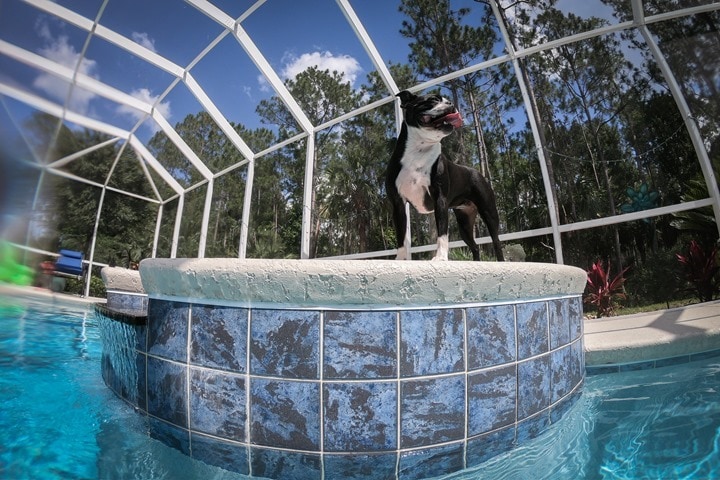 Oh, and the nice warm weather of Florida is handy too!

Got a busy week ahead – so stay tuned to the Twitters (and here of course) for sure!