Getting pulled over by five police vehicles while riding our bikes 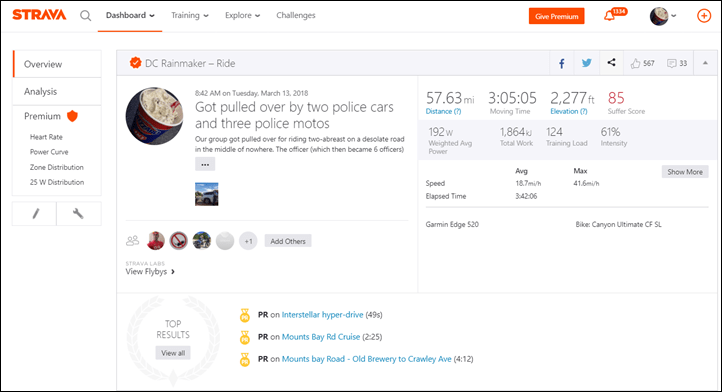 I got a bunch of questions about my Strava pic from a ride I uploaded last week, so I figured I’d color in a bit more detail.

It would only be appropriate that while on a group ride with the Cycliq crew that we’d collectively manage to get pulled over by two police vehicles and three police motorcycles.  For those not familiar though with the company, Cycliq’s singular purpose in life is making front and rear facing bike cameras that double as full bike lights.  They’ve made a few generations of cameras now, and since they’re based in Perth, I figured I’d catch up with them last week.  Like virtually all meetings in the cycling industry, those meetings start on a bike.

The ride itself wasn’t technically Cycliq’s, but rather, a group ride from a nearby bike shop (Glen Parker Cycles). The Cycliq folks are regulars on that ride, and the route seemed appealing and scenic enough.  So I met them at the shop and we quickly got my bike outfitted with the Fly6 CE and Fly12 CE. These were announced back in the fall, and then started shipping a few months ago.  Sooner or later I’ll drop my review of them. 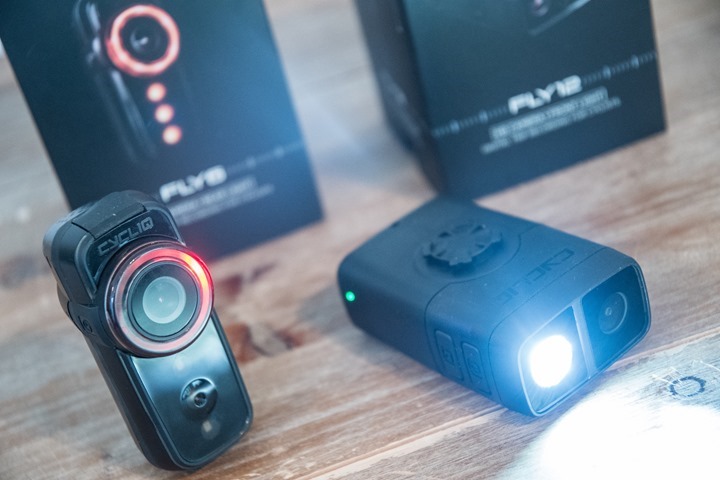 With them already fully charged and now attached to my bike, we headed on out.  The first 45-60 minutes of the ride was mostly on bike paths as we worked our way out of the center of Perth towards the mountains (err…hills).  It was pleasant, and the folks off the front were rather efficient at these paths and streets.  It wasn’t so much hard physically to keep up, but rather, just mentally trying to figure out which last second banking sharp turn past middle of the trail poles we’d take next.

Before I knew it though we had cleared the city and were starting our ascent up into the hills.  It was mostly quiet in terms of neighborhoods, with only a handful of houses on these streets and only a handful of streets before it was just the bush. Virtually no cars around this time of the morning. 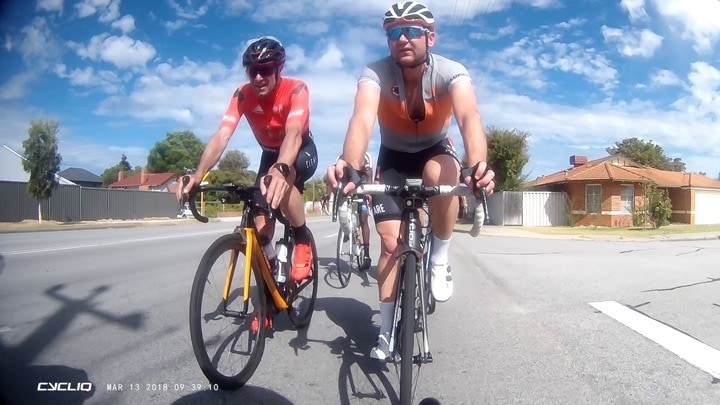 (Note: The Fly6 and Fly12 time wasn’t set, so they don’t 100% match. That’s normally done when you sync it to your phone, but I didn’t finish doing that before we headed out.)

Most of the time the group was riding two abreast, except on the far busier streets where it went single file.  But like most group rides, riding two abreast is safer because it shortens the length of the group by half – rather than this unwieldy long snake going down the road.  It also makes people more visible, and ultimately forces drivers to pass more safely.  All of this is well understood in cycling circles the world around.

So it was slightly odd that out of nowhere an unmarked police white SUV coming towards us parked his vehicle in the middle of the road, turned on his lights and siren, and communicated his apparent desire for us all to stop.  Our total group size was maybe 10-12 people at this point.  So stop we did. My front camera was initially tilted slightly down, apparently the thumb screw wasn’t as tight as I thought. I fixed it a few seconds later. 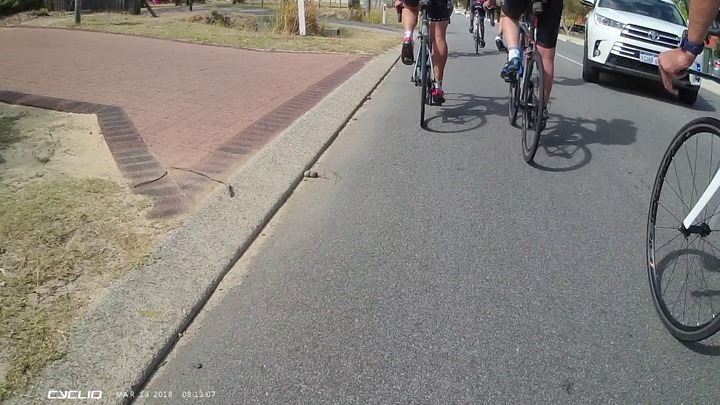 At the time the one who had been on the front was none other than Cycliq’s CEO.  That’s important to remember, because when your entire company is based upon cycling safety products – it’s likely that you’ll know the laws applicable to those products fairly well.  Especially in your hometown.  And since he was on the front, he was the defacto person that the police officers wanted to talk to. 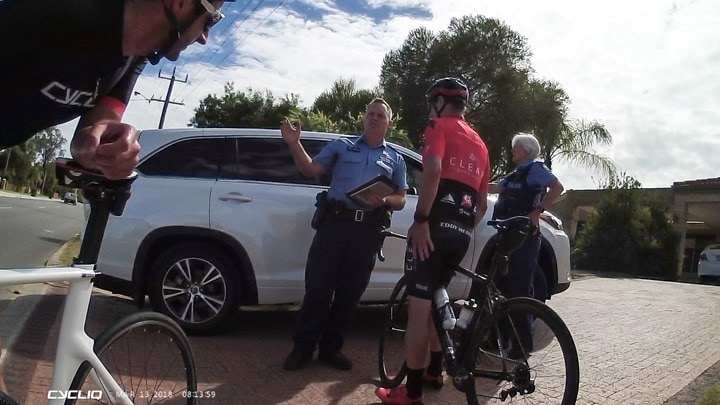 The police officers wasted little time pulling into a nearby driveway and beginning to explain our wrongs:

Police Officer: “You’re meant to be single file where there’s two lanes in one direction.”

Police Officer: “It is the law!” [Police goes to get ‘the law’ book out of backseat of vehicle]

First Police officer: “Do you know what we did last week? We had a pursuit going down here, it’s dangerous. For your own protection…” [The conversation faded a bit as the direction turned back to the book]

At this point there was a bunch of chatter among the group and asking questions from the officers, who were probably starting to get an inkling that they were in the wrong.  The pursuit thing was thrown out as a ‘whataboutism’, which has no real bearing on the conversation at hand.

Still, they were set on arguing the point while trying to find it in their manuals.  Along the way, a few people let the officers know they were being recorded – as there were probably half a dozen Fly6 or Fly12 units along on the ride on various bikes.

But in meantime, backup police arrived. Three police motorcycles and another police car (the white SUV directly in front is the unmarked police vehicle that originally stopped in front of us).  I think we had half the police force from this town now surrounding our little peloton. 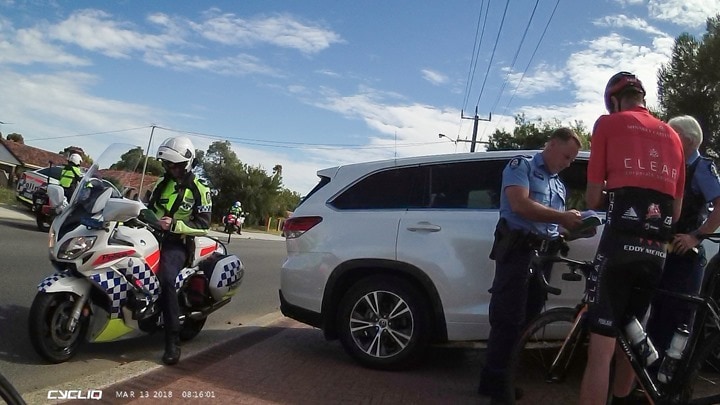 The main police officer then started digging more deeply through his manual.  As did the nearest police motorcycle.  It was like an open book test session.

However, a few seconds after the police moto started digging through his book, he motioned for one of the officers to come over. 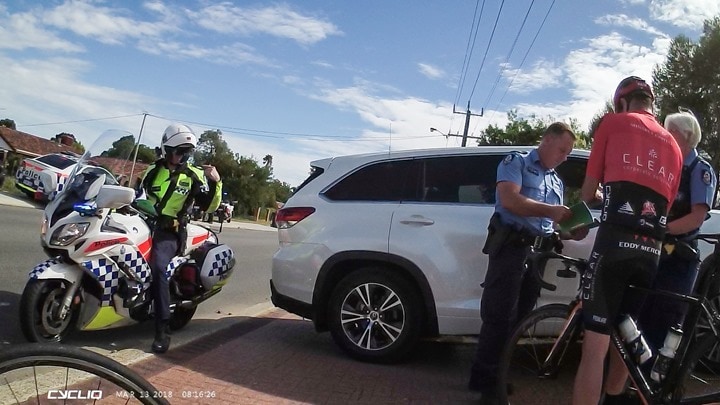 Around that moment, you could probably tell that the police moto officer told the lead police officer something roughly akin to ‘no such law exists’ (the cameras mics didn’t pick up that conversation well).  As it didn’t take long until the officer went back to the main discussion and clearly aimed to wrap things up.

They offered to take the Cycliq CEO’s contact e-mail information, and e-mail him the applicable information a bit later.

And by and large the conversation was quite pleasant between everyone.  In fact, it was actually funny.  As an American, I thought the entire conversation was about as polite as ordering afternoon tea and crumpets. Whereas the Australians I was with thought the conversation seemed a bit edgy at best.  Sounds like they need to watch more American episodes of COPS to see what edgy conversations are really like! [Side note: Can you believe that show is still on TV?!?]

At this point the officers let us go and we headed out to continue our ride into the hills. 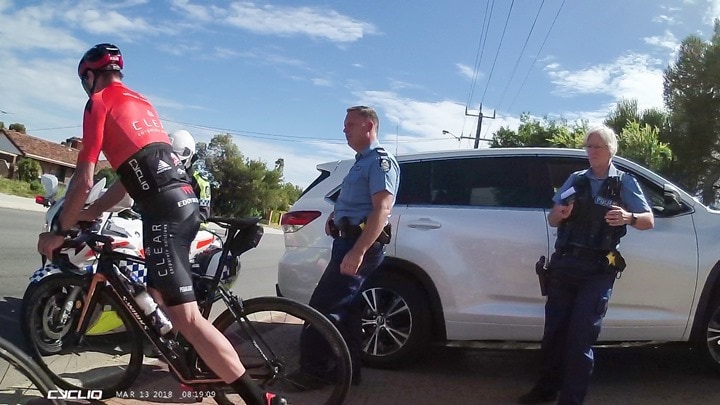 We didn’t expect to ever hear back from the officers who had the e-mail address of the Cycliq fellow.  We expected that to be tossed in the trash can at the nearest opportunity.  No worries though, everyone here knew we were in the right, and everyone knew the law.  We figured the officers would soon realize they were wrong and we’d never hear from them again.

A few hours later the ride was wrapped up and onto the day’s worth of meetings I went.

But then, around 4:30PM we got a follow-up e-mail from one of the two police SUV officers, which sits within the Warwick Traffic Office, within the Western Australia police force. It was simply titled “Regulation 130 Road Traffic Code 2000”.

“Further to our discussion this morning in Swan View.

It would appear you are correct and my understanding of the regulation was mistaken.

I refer in particular to regulation 130 Road Traffic Code 2000 that allows for a rider to be alongside another, both dual and single lane.

My apologies for any confusion caused.

Well then, color us impressed. None of us ever expected them actually to respond.

In fact, after the ride and before the e-mail came in, I had done some digging using the power of the interwebs.  By typing in the highly secretive phrase of ‘Australia bicycle laws’, I found the second result was updated just a few days earlier – on the Western Australia’s Department of Transportation site [Note: Google is smart enough to know where I was physically, so that result ranks higher for me here than if I was searching from Arizona or Tokyo]. 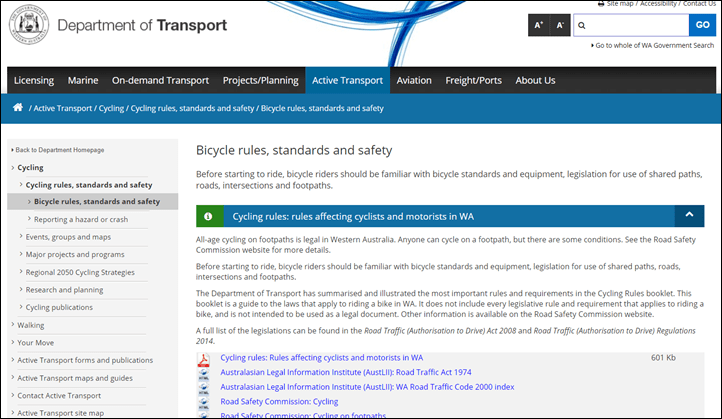 Inside of that page was a link to a handy dandy PDF file, complete with tons of pretty diagrams covering every possible bicycling scenario that one might encounter in Western Australia.  On page 7, you’ll find this (highlighting mine): 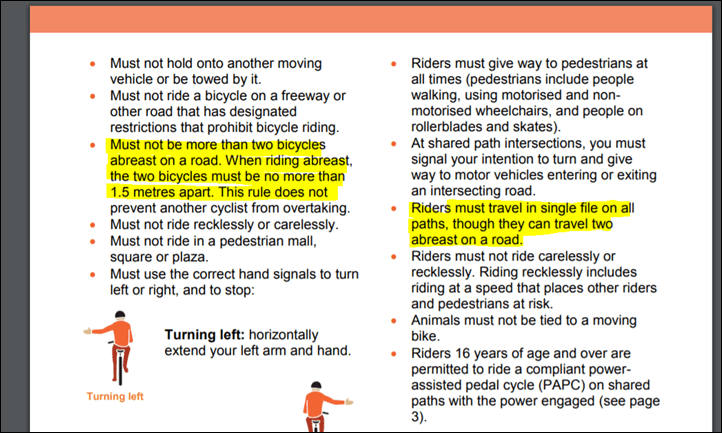 Regrettably, there were no pretty cartoons related to this ruling, but no worries, if you’ve made it this far in the post, I presume you’re capable of reading.  All of this being based on the original law cited by the officer in their e-mail, which was last amended in 2009.

Of course, this isn’t me picking on the Western Australian police force for believing alternate facts – hardly so. In fact, I’m giving them props for e-mailing back within hours saying they were wrong.  I’d bet the vast majority of people out there (police or otherwise) would never have bothered e-mailing back a stranger they were unlikely to ever meet again saying they screwed up.

Ultimately though, they just picked entirely the wrong group of cyclists to enforce an imaginary law on.  Nobody knows these laws better than the Cycliq folks. And while it might have made for an epic viral video if things turned out differently, everyone on both sides was calm and respectful.  Sometimes boring is good.

With that – thanks for reading, and oh – thanks to the whole group for the ride, some beautiful scenery up there! 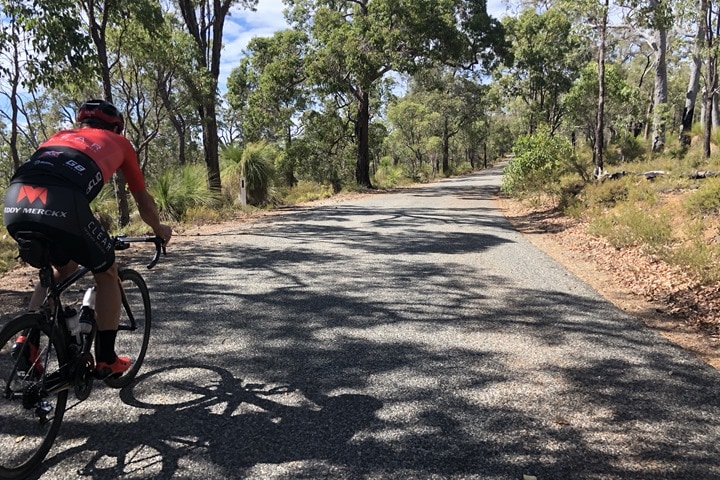 [Side note for Perth peeps, I’ll be joining the PCITP group tomorrow morning – Weds the 21st, at 6:00AM at the Bell Tower for their group ride around the river.  Looking forward to it…well, except the 6:00AM part.]