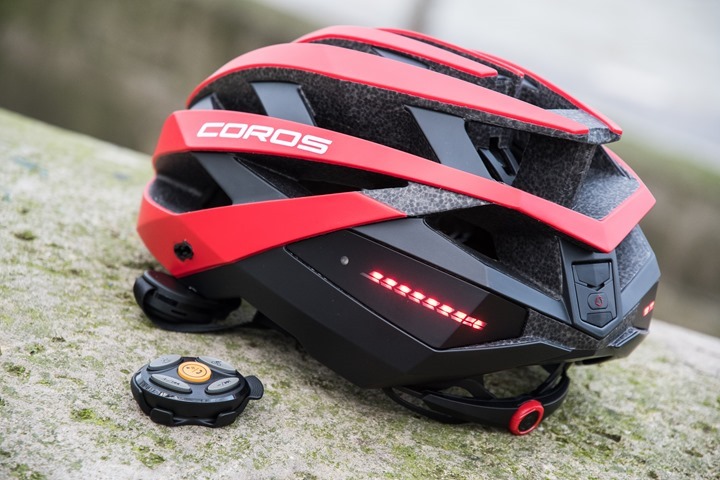 It’s been one year since COROS burst onto the scene with their COROS Linx Smart helmet.  The main appeal of the helmet was that it had not only jawbone conduction speakers built into the straps (which don’t block outside noise), but it also had a wind-protected microphone.  Oh, and it was Strava orange.  Or Zwift orange.  Or Dutch orange I suppose.  Either way, orange.

Actually, it also came in black as well as white, but that’s boring.

In any event, they delivered their crowd-funded wares roughly on time, a rarity in the industry.  They then did some confusing corporate re-org stuff with the company and started shipping out units again last spring.  All’s well though, and now here they are with a secondary product – the COROS Omni.  This new helmet retains all of the previous goodness of the existing helmet and adds lasers.

Actually, it doesn’t add lasers, but it adds lights.  Which are almost as cool as lasers.

Minus the fact that it’s somehow not orange anymore.

Which, is a good time to move onto the next section. 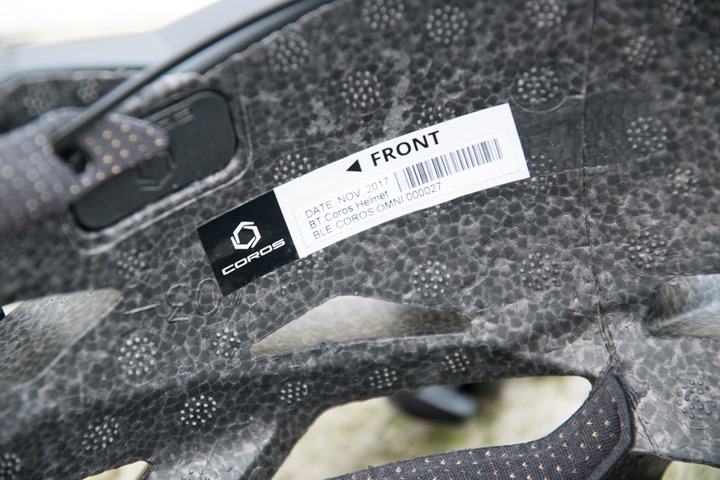 Now, as I was saying before I got distracted with flippin’ lasers, is that the new unit retains all of the previous audio focused goodness.  So to briefly recap all of that, here’s the key baseline goodness from my last review of the Linx helmet (why yes, I’m glad you asked, check out that in-depth review):

– Jawbone conduction audio
– Bluetooth connectivity for music playback and phone calls
– Microphone built into upper front edge for phone calls
– Connectivity to smartphone app for configuration
– Had a remote control for volume and call control
– You could in theory do turn by turn navigation with it
– It had an app for tracking rides
– It was Strava/Zwift/Dutch orange
– One could actually upload to Strava from your helmet, sorta.

Anyway, that’s all the existing unit, what about the new one?  Well, it’s added:

– Lights on the back of the helmet
– Crash detection algorithms in helmet (used to be just on app)
– Crash notification to emergency contacts
– It’s got a visor option for mountain biking
– They’ve redesigned the app
– It’s black, red, white, or blue
– It’s not Strava/Zwift/Dutch orange

So in a nutshell, the key takeaway here is that it’s got lights on the back of it.  To dive straight into the tech, these LED lights have three settings: On, Off, or Auto.  In the auto configuration, they illuminate based on how dark it is.  If it’s not dark out, they’ll basically be off.  If it’s dark out, then they’ll stay on. 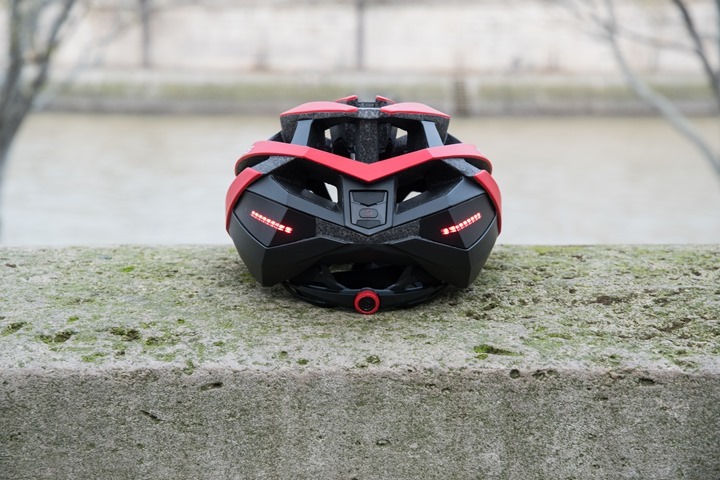 The redesigned app feels like the company wants to become some sort of health and fitness hub with now more pronounced aspects like tracking calories and steps, which is honestly a horrible idea (versus just rides before).  Hopefully they’ll re-focus on being a bike helmet company.  Still, if you want to track your rides using their app you can with their app.  It uses your phone’s GPS though, and then afterwards you can upload to Strava.  I’m not sure clear on why you’d use this app versus Strava’s app, since Strava’s app has so much more functionality.

The one benefit however to their app though is the crash detection piece.  If the helmet detects a g-force of 1G or more, it’ll trigger notifications to your predefined contacts via text messages.  And within the app you can pair the remote to the helmet as well.

Of course, the main feature is still there – the Bluetooth connected audio components.  This includes the jawbone conduction speakers, as well as the microphone.  For those familiar with jawbone conduction, the main appeal is that if resting against your jawbone, it’ll deliver more clear sound that isn’t impacted by wind. 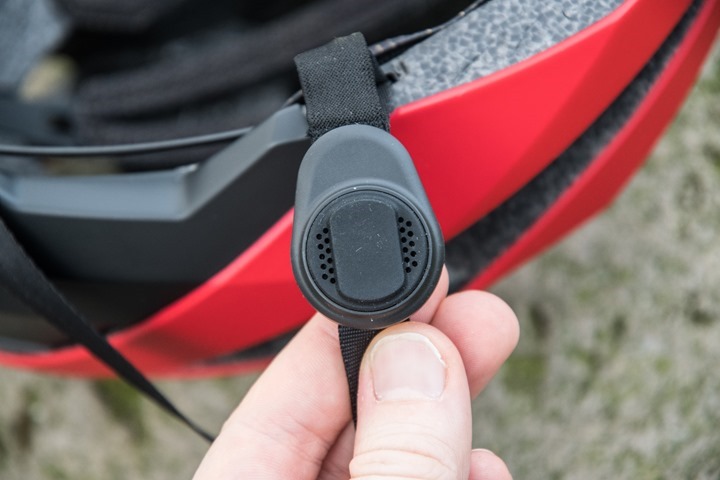 Meanwhile, the microphone sits just up under the front lip of the helmet, out of the wind: 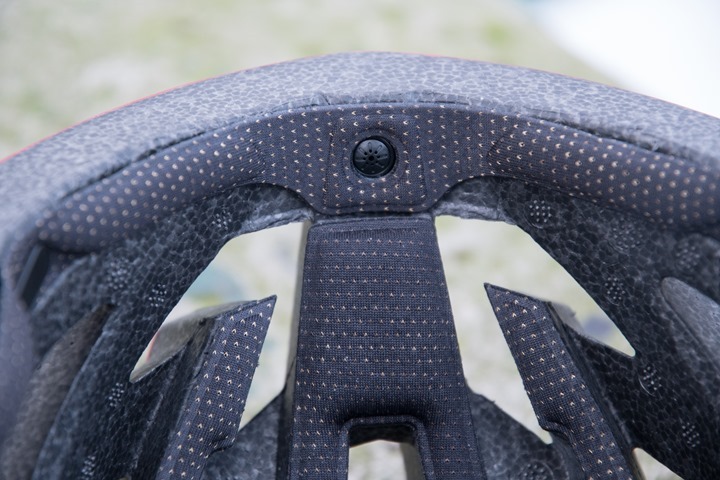 Both of these use standard Bluetooth audio services, so they’ll work with any phone.  Both of these features were in the previous COROS Linx helmet, and both worked pretty darn well.  From a battery standpoint, the unit claims about 8 hours of battery life.

When it comes to weight, the new unit is actually lighter than the existing one.  The Omni weighs 343g, versus the 411g for the Linx: 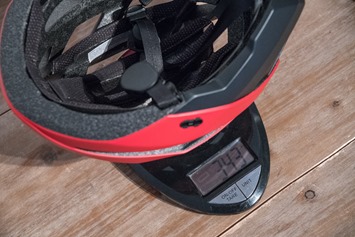 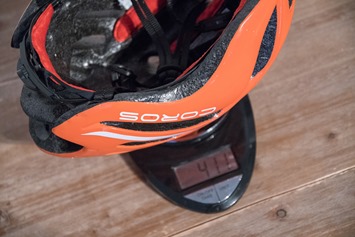 From a size standpoint though, while they look almost identical in width, the new one just looks wider to me.  I think the flatter design makes it look like a squished turtle, versus the more aero look of the Linx (orange awesomeness one): 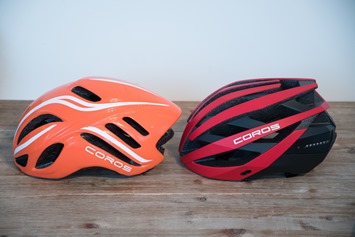 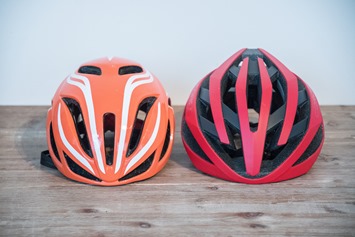 Still, different looks for different folks.  Of course, the helmet is heavier than a non-smart helmet.  Obviously you’ve got to account for the weight of the electronics/lights/batteries/etc… But it’s still pretty lightweight and I don’t really notice it. Let’s get into a test ride.

(P.S. – For lack of anywhere else to stick it, the helmet is certified within the US, Europe, Australia, and N.Z.) 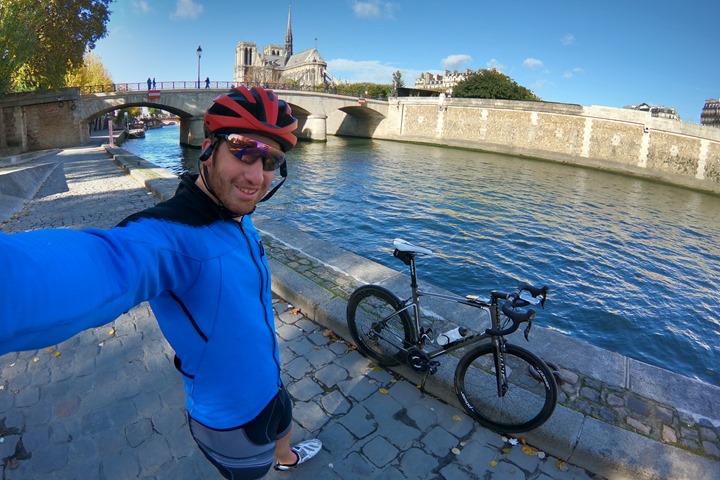 I’ve been using the helmet on various rides since October, both as a regular helmet (without connectivity) as well as in a connected sense.  In both aspects, it’s worked great.  I’ve technically had two helmets, a pre-production and the final production model.  The only difference being that on the pre-prod unit one of the speaker pods was broken, but on the production unit that was resolved.  Both units connected to and played back music just fine. 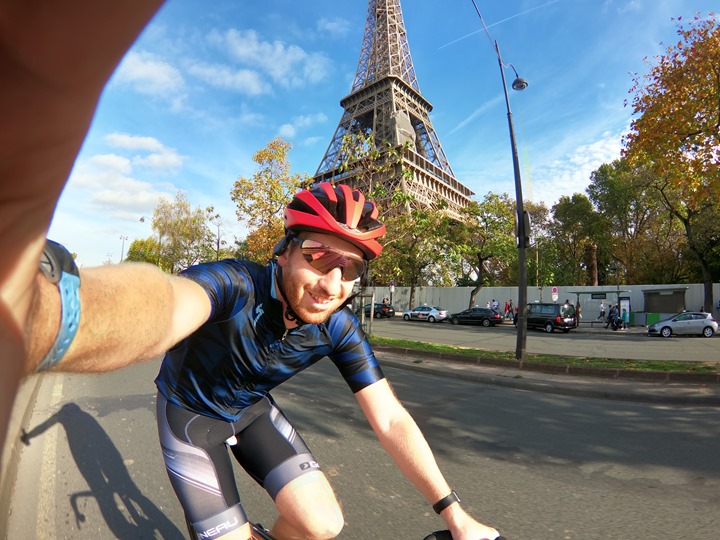 Speaking of which, from a music quality standpoint (as in, how well you can hear it), it’s pretty good.  But it’ll depend on the fit.  If the pods float too far away from your face you’ll lose audio volume (it won’t sound as loud).  Ideally, they’re snug against your jawbone, thus allowing the bone conduction magic to do its work.

You can adjust the fit a bit to find the right spot, so you’ll want to do that.  Oddly though, the helmet doesn’t seem to come with any little strap mini rubber band holder thingy.  So the extra length of strap floats about some.  Though you can easily DIY a solution here for a few pennies probably (small kids hair elastics). 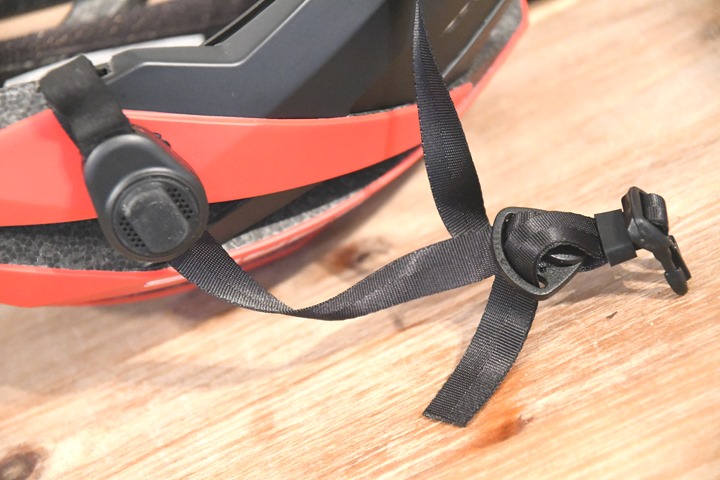 From a quality standpoint, I had no issues with the audio quality.  The playback of music was good and loud enough, and more importantly, it doesn’t overtake the sound around me.  You can watch my video from last year on how that all works below.  Exact same technology, just in a different helmet body:

Like before, the remote control is used for increasing/decreasing the volume, as well as accepting or hanging up a call.  Though oddly the remote didn’t come with the required CR2032 coin cell battery.  No biggie, I have a few hundred of them. 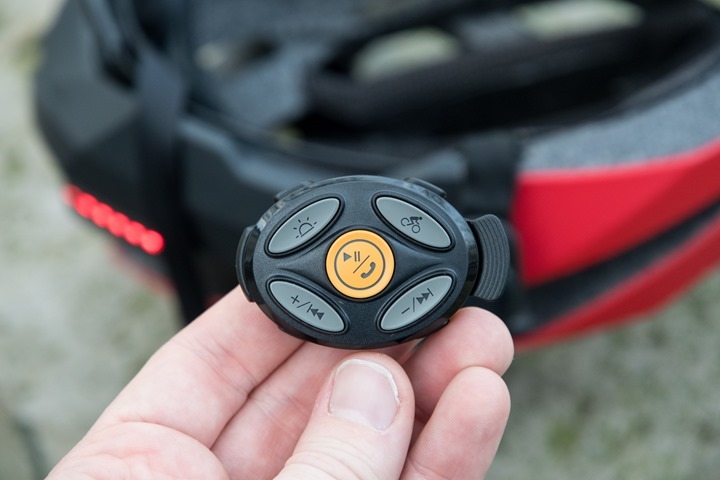 On the lighting side, it’s literally fire and forget.  You turn it on, and it just does its lighting thing behind you (facing backwards) – there are no front facing lights.  You can’t control directions as if it were a turn signal, and honestly, I don’t think cars would get that anyway. 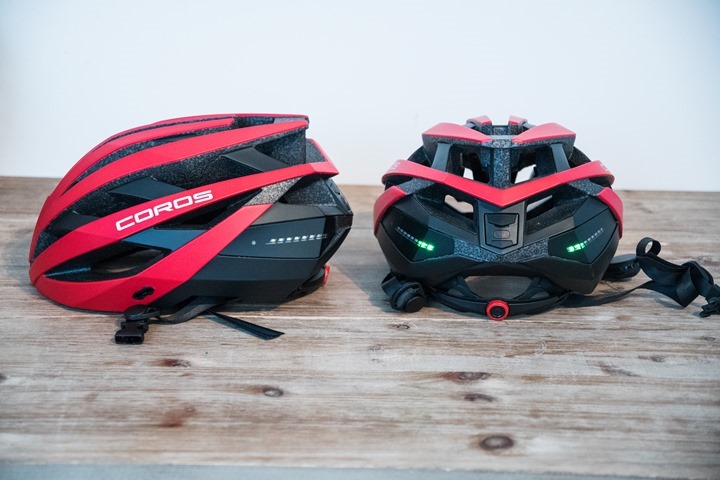 One slightly missed opportunity here is adding in automated ANT+ Lighting Profile connectivity.  With more and more companies starting to adopt that (Cycliq, Bontrager, See.Sense, and of course Garmin), it would have sorta been the most brilliant thing to just have the lights connected to the bike computer and turn on automatically (without you having to press the button on the back).  Perhaps their chipset allows for them to enable ANT+, I’m not sure.

Either way, functionally speaking, everything works good for me at this point with the rides I’ve done. 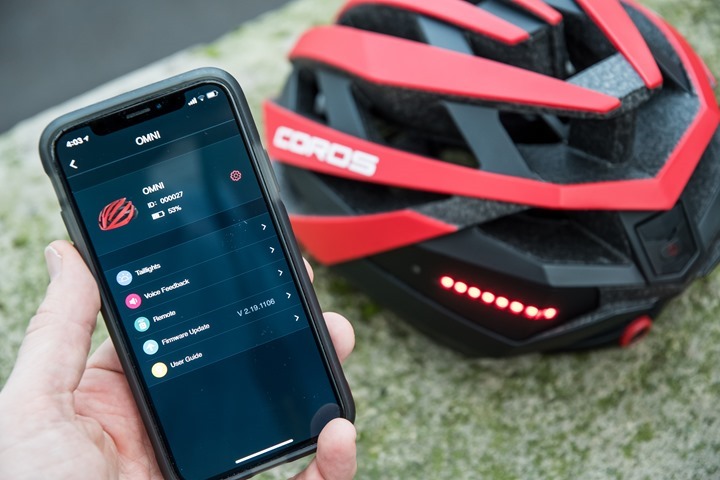 Over the last year I’ve used the COROS Linx helmet (which I bought with my own money), and liked it quite a bit.  I don’t often use the music, ironically enough, but when I do, it’s nice to have (I’ve primarily used it on long slow climbs in the mountains).  I’ve long adjusted to the slight increase in weight, so much so that it’s not even a consideration for me.

As for Omni though, personally I’m not a fan of the appearance on my head.  I just happen to like the slightly more aero look of the Linx instead (and the color orange).  Of course, it’s not really designed as a 100% road helmet given the visor option, but rather meant to be more multipurpose.  Thus, to each their own.

Still, from a tech standpoint, it’s cool.  The pricing on Indiegogo is $99 right now, versus the $199 retail.  The company is basically just using the crowd-funded platform for marketing, since the helmets are already manufactured and in process of being shipped across the oceans (basically just like they did last time).  So your risk here is pretty low.  On the flip side, if you want a helmet immediately sans-lights the existing Linx has been on sale recently, and it sounds like it’s set to go back on sale for $119 shortly.  So there’s an instant gratification element there, plus, it’s orange.