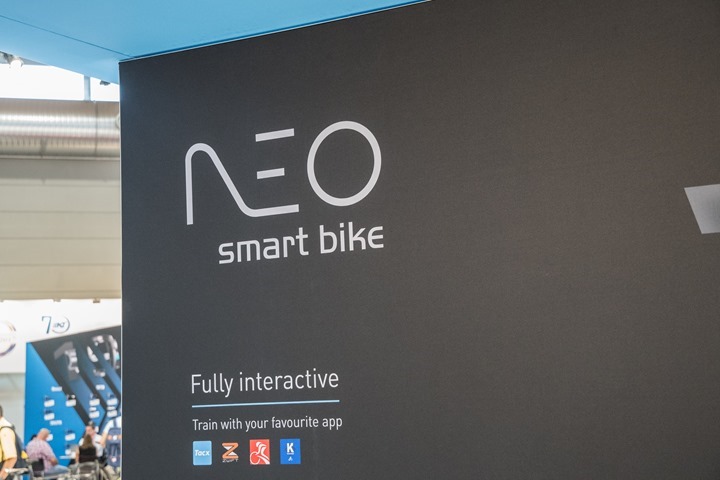 (** Update: Check out my full Neo Smart Bike In-Depth Review for the most recent information and thoughts on the product**)

While you may not know it, we’re just at the edge of an indoor bike revolution.  Or, at least we are according to some people.  No matter whether or not that happens we’re seeing bike trainer companies and others alike starting to develop products in this market.  The first of which this week to flaunt their plans was Tacx, with the new Tacx Neo Smart Bike.  In a nutshell, the company has taken their popular and high-end Neo Smart trainer and built a stationary bike around it.  While they had this on display at Eurobike, it’s far from ready – with it being slated for Fall 2018.

Let’s dive into what the concept is though. 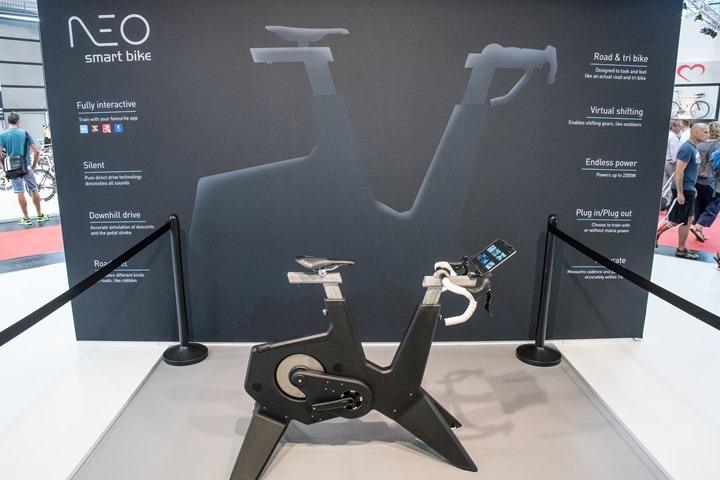 At the base of the unit sits the Tacx Neo, easily spotted by the familiar circular silver disc.  Even the legs of the Neo Smart Bike start to resemble the angles of the existing Neo (and to a greater degree the Flux).  As does the materials used on the outside of the unit. 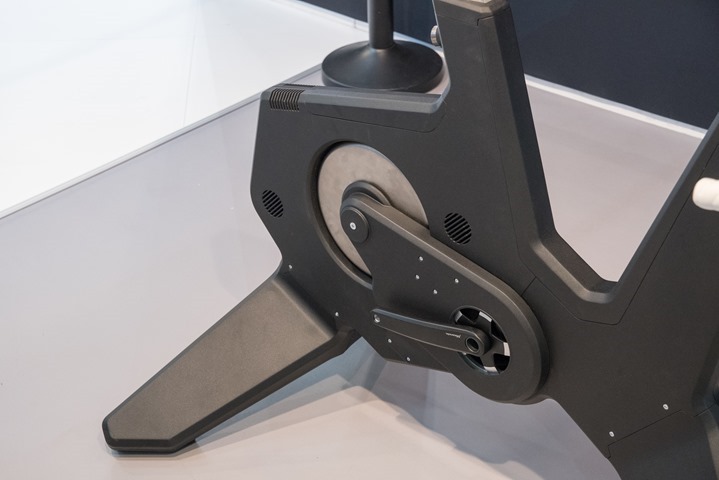 As you’d expect on an indoor stationary bike, the crankset is already present, though you can add your own pedals to it, so you don’t have to worry about specific pedal compatibility.

One of the major advantages here though of an indoor bike is the ability to minimize the noise since you can remove many of the clanging and clunking parts like chains, chainings, and shifting aspects. Obviously, the crank arms are driving the flywheel, but that can be done with far quieter components than your bike.  All of which leads to a near silent bike.  Though, the fan that you’ll likely have facing you won’t yet be silent. 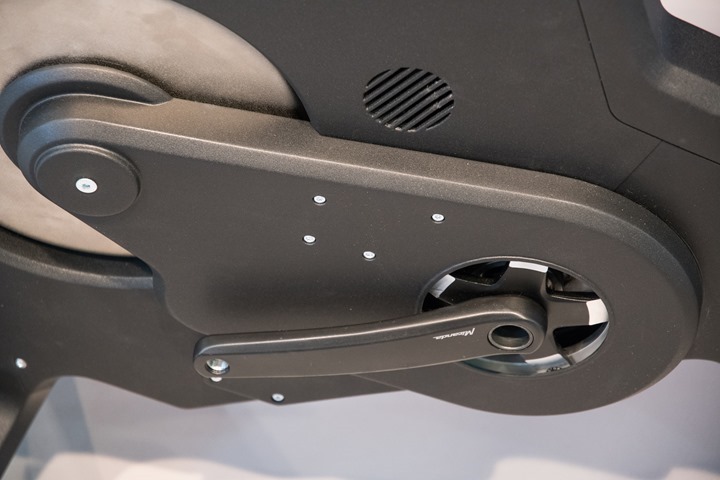 Moving up the bike to the seat, this is where you see the prototype aspect shining through, with things not yet finalized.  But as you’d expect from a high-end stationary bike, the goal here is really to allow complete flexibility with respect to position. So the seat will slide forward and backwards and up and down, as well as being able to adjust standard saddle position within that on the rails. 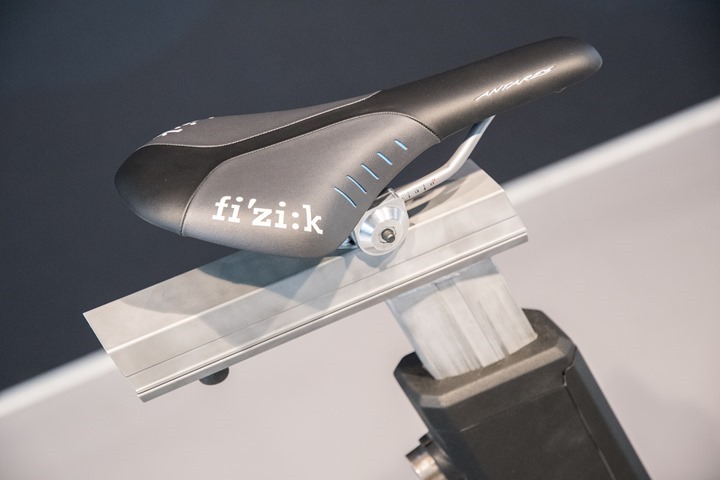 Sliding forward to the handlebars, you’ve got similar flexibility here.  The bike will be able to be configured in a road or triathlon setup, or both if you want to go more the clip-on route.  The same flexibility in positioning is true here too – as is the non-finished design look.  You’ll notice the handlebars aren’t proprietary. 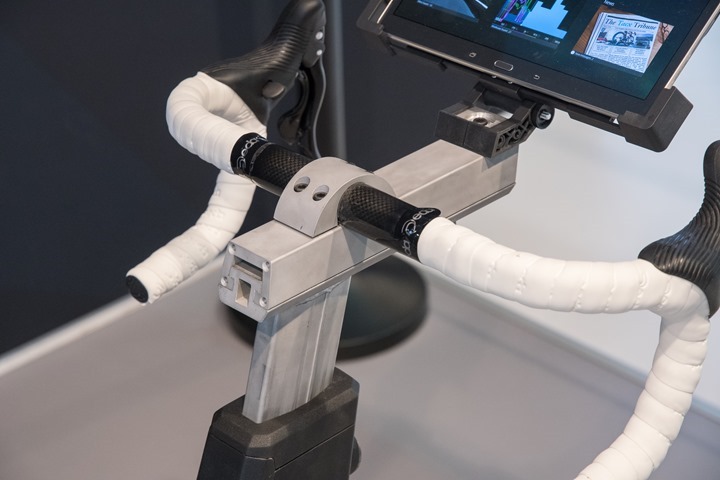 What’s most important here though, and something pushed heavily by Zwift to these companies, is the inclusion of actual usable shifters.  These shifters will virtually change gears, allowing you to essentially replicate that outdoor feel of quickly shifting through gears as you hit a climb or descent. 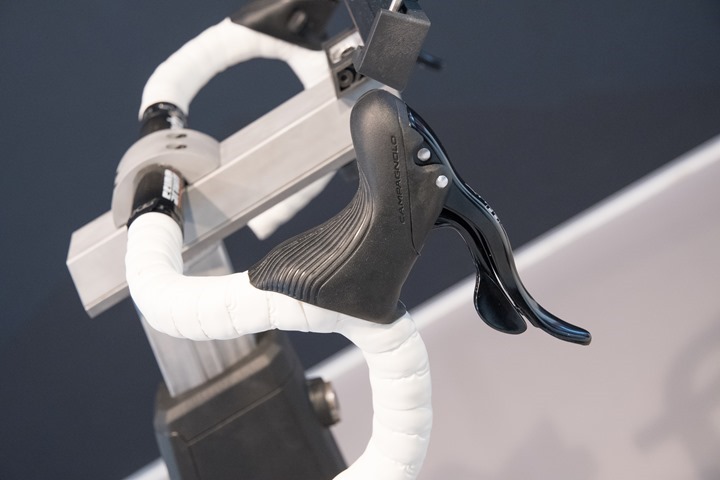 Finally, we’ve got the display/tablet holder.  At present this is basically just a sawed off version of the road bike tablet holder they already have in the market (it’s pretty nifty), and then affixed to the front.  From there you can stash whatever tablet you’d like within that, so that could be an iPad running TrainerRoad, or an Android tablet running Zwift (yes, soon).

Oh, and just so it’s clear – because the Tacx Neo Smart Bike is based on the Tacx Neo, it’s got all the usual apps compatibility goodness inside: ANT+ FE-C, Bluetooth Smart trainer app support, and broadcasting of power/cadence/speed via both ANT+ & Bluetooth Smart. 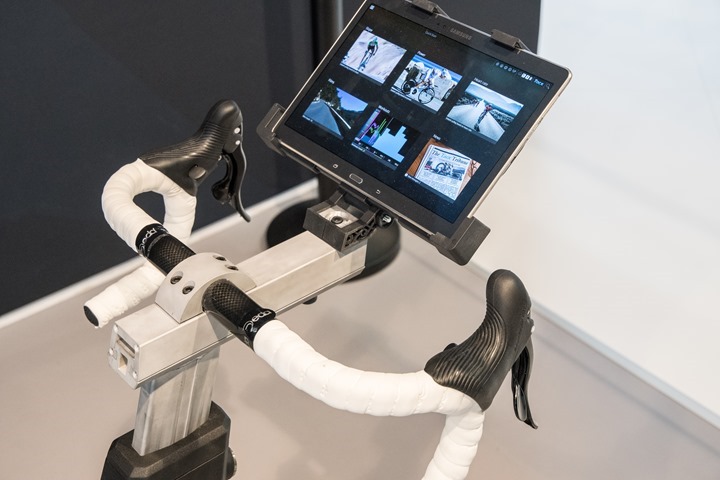 When it comes to power, the unit is akin to the Neo as well, enabling you to go sans-power cable and be self-powered.  Heck, the final edition will even have two USB charging ports. Perfect for powering both the tablet up front as well as your phone to Instagram photos mid-ride.  Wait, you do that, right?

Now here’s the catch: The price.

Quite frankly I point blank said to them: “No way, non-starter.”

The product will be a market failure at that point, no question.  They’ll see that soon enough with other competitive options on the market.  At that price point you could pick up a Neo and a perfectly functional bike and still have some leftover for a boatload of cookies.

Part of their challenge is that distribution of such a unit is complex and costly.  Be it the simple cost of delivery or stockage for such a large object.  All things that add to the final consumer cost.  But Tacx will have to find ways to lower that price, be it through a decrease in profit or a change in components.  The good news is they have a year to figure that out.

Is this the future? 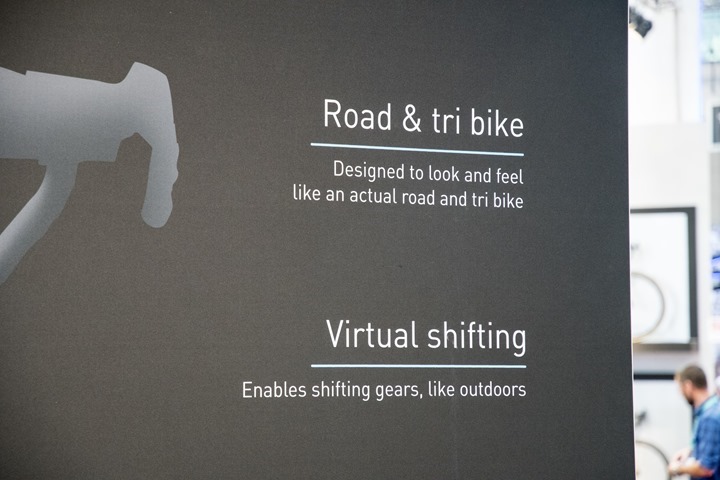 In many ways what happens next is far more interesting than what they showed.  Tacx, and others, are betting some chunk of the farm on Zwift here.  Or more accurately stated – Zwift is betting its investors happiness on these companies stirring up interest in the indoor cycling market that translates to increased Zwift memberships.  After all, it’s at Zwift’s prodding that’s really driving all these companies to start designing and making indoor bikes.

Much of this thinking follows watching the incredible success of Peloton.  Within trainer industry circles, Peloton is considered a dirty word.  That’s of course primarily because these companies can’t yet take advantage of that exploding revenue stream.  Some believe that by making stationary bikes as well, they’ll make indoor training more appealing to certain segments of the market – namely women (overwhelmingly indoor trainer purchases and app subscriptions are middle-aged men).  It’s an area meanwhile that Peloton has excelled at (totally dominated actually).

Of course, what these companies don’t want to admit but do know is that it’s not the bike.  As all these companies will tell you, the Peloton bike is physically ‘cheap’.  But it doesn’t matter – because the Peloton bike platform as a whole is brilliant. The live classes, the human to human integration, the large display built right into it.  And most importantly: The ease of access of the entire thing.  Just jump on and ride.

The Girl begs me almost every week to get a Peloton bike for her to ride.  She’s far more interested in that than the likes of Zwift, despite normally being classed into the ‘competitive triathlete’ category.  Of course, Peloton can work on other bikes via their app assuming you pay their $12/month membership fee.  But the experience is hardly the same – again, it’s the whole package that makes Peloton what it is.  And unfortunately, with their iOS app (sans-bike), you can’t see data like heart rate, cadence, resistance and more.

And that’s an area that indoor trainer companies will need to contemplate as they move forward over the next year towards what will invariably be most of them releasing an indoor stationary bike next fall.  Is merely having Zwift on a non-integrated screen enough?  And if not, is there really a market there for half a dozen new indoor bike brands?

Without question the most interesting ‘trainer’ discussions that were occurring at Eurobike weren’t at all about the products shown at Eurobike.  They were about what’s going on behind the scenes and some pretty significant decisions these companies are going to have to make well beyond stationary bikes over the next 4-12 months.

Found this review useful? Or just want a good deal? Here’s how: