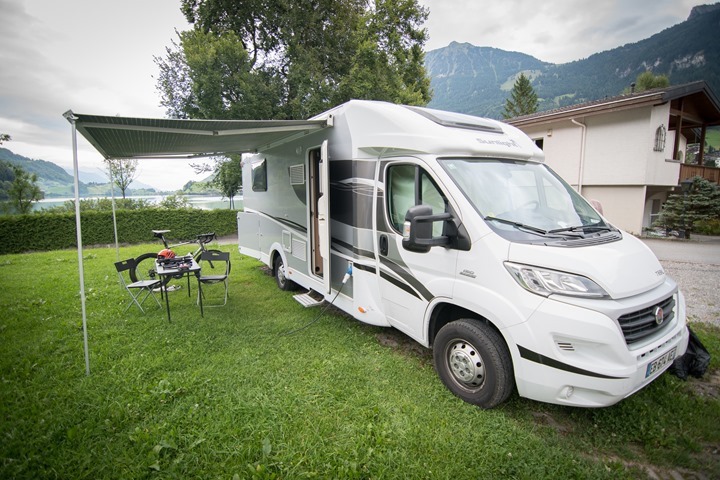 As is customary the last few years, I rent an RV and drive down to Eurobike for the week long festivus.  The main reasons I do this is that it’s both cheaper than most hotels, as well as being a huge timer saver on a daily basis.  Finding hotels that are close to the convention halls is both tough and expensive, whereas the convention center actually provides a massive RV campground a mere 100 meters away from the main halls.  It’s like one giant party.

Albeit, one giant party in the rain this year.

I didn’t end up doing a Eurobike RV tour while at Eurobike itself this year, for the simple reason that it was monsooning most of the days of the show.  So instead I filmed it as I worked my way back  to Paris from Eurobike through the Swiss Alps.

Within it I show where I stash all the gadgets, trainers, and goods I use – not just for Eurobike posts, but actually many posts leading up to and after Eurobike.  You’ll see lots of things I shot or filmed from the RV over the coming weeks.  It’s just the way I roll, literally.

Note, if you want to look back at history, I did a DCR Eurobike RV tour a few years ago, which you can find here as well.

Also, like past years we did some recording and testing at the DCR Eurobike RV.  For example the Zwift Podcast recorded an episode outside under the awning.  Well, at least until the awning collapsed under the torrential rains.

And as noted, other goodness coming down the road too.  It was a perfect place to hold meetings to see upcoming show tech…off the show floor. 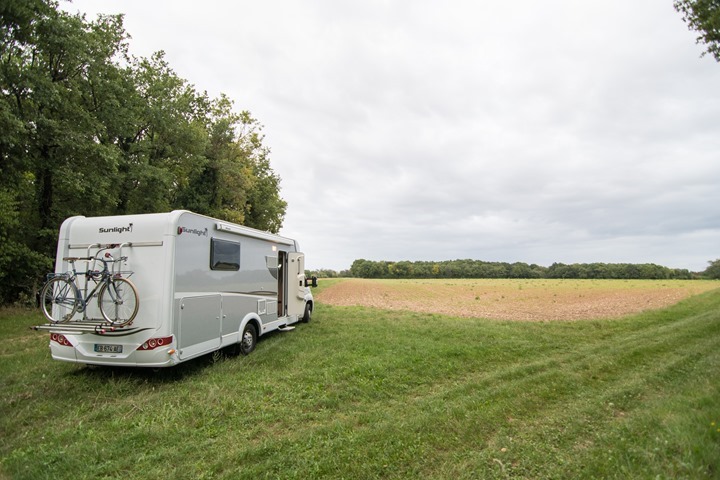 Yes, I rented it from a place in Paris, but you can also rent from a place in Zurich. The one in Zurich is couple of kilometers from the airport (5 minute drive).  I booked it online in July, super easy.  From Zurich it’s about a 2 hour drive to the Eurobike show grounds.  Whereas from Paris it’s roughly 7-9 hours depending on traffic and the route you take.

Not in the RV lot itself.  There is good cell service though.  The convention halls have WiFi, but it’s terribly slow.  What I did was buy pre-paid SIM cards from ALDI, the grocery store that’s nearby.  While I have a French SIM card as well living in France, the whole EU ‘use data anywhere’ thing doesn’t fully apply to all my data allotment, so I still needed more.  On average I went through 5-10GB of data per day uploading posts and videos.

Note, do leave yourself a bit of time to figure out the German SIM card activate process.  It’s one of the most wonky and complicated anywhere in the world.  I actually had to basically FaceTime with someone to get it all working.

It’s pretty cheap – cheaper than a hotel would be in this area during this week.  For Monday to Friday it would have been 750EUR (total).  We added a few extra days on the weekend as well of course, so that ups the price a bit.  But for just the Monday-Friday piece it’s rather inexpensive.

That includes a full kitchen set and the tables/chairs outside and the overhang (depending on the model).  It does NOT though include bedding, hence why I have a sleeping bag.  You can rent that from them.  Same goes for towels.  I find in general that even if you have to buy some of this stuff, you can do so at any number of Ikea stores you’ll pass along the way, and your whole payment will likely be under 50 EUR.

There are 2-3 large grocery stores within about a 5-7 minute bike distance, right beyond the grounds of the convention center.  The RV lot and the convention center also have free bike rentals through the town, like a bike share program. I didn’t use it, but just an FYI that it’s there.  At worst though it’d be a 15 min walk to the nearest grocery store (which is massive).

From there I could cook anything I’d like.  Since I was plugged in the entire time, the fridge stayed cold (and the freezer stayed frozen). The RV came with two gas tanks for use with the cooking stove inside.

And yup, I’ll continue to do it next year as well!

With that, thanks for reading!  If you’re looking to burn a bit of time, here’s all my Eurobike 2017 posts!  And yes, there’s still more on the way as I dig out from product announcements the past week or so.