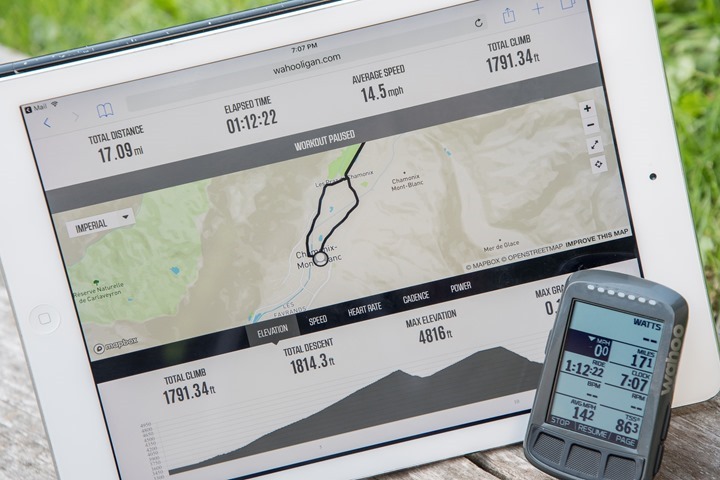 One of my biggest complaints about live tracking on Wahoo’s platform over the last year and a half is that it sucked.  I mean, not just a little suck, but a big suck.  Previously when you enabled live tracking on the Wahoo devices to send a tracking link to a friend/friend-with-benefits, it would provide information about your position.

Except, that’s all it did.  It just showed a single blue dot of your current locale.  No past track history.  No sensor data.  No climb data.  Just a random-ass blue dot on a map with zero context.

But as of today, it sucks less.

Actually, they’ve moved from sucky to awesome in one fell swoop.

With a firmware and app update released today, the Wahoo cycling computers now show proper live tracking information to friends and family, and even give some pretty unique and cool features that Garmin (who is basically the only other bike computer with this capability) doesn’t have.

I went out for a bit of a ride last night to test things out, so here’s my findings.

While this post is written about my usage with the Wahoo ELEMNT BOLT, all of this applies equally to the BOLT and the regular ELEMNT.  Zero difference here.

To start, you’ll need to update the firmware on the unit as well as your phone app, which provides the new options. All of this only takes a few minutes to complete. 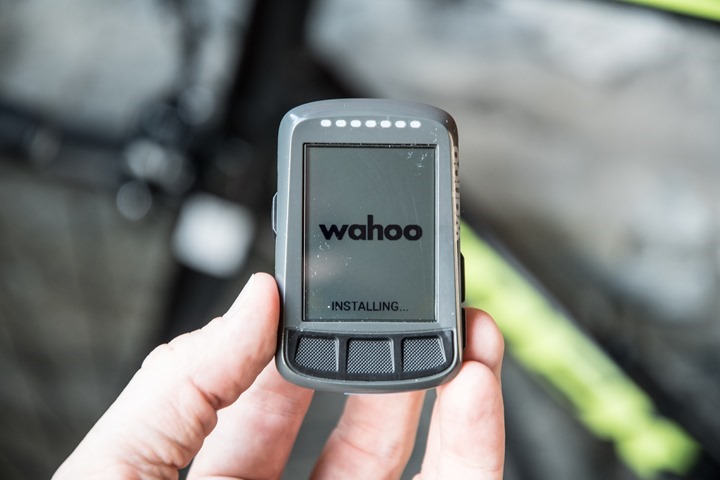 For those curious, here’s the other things included in this particular release: 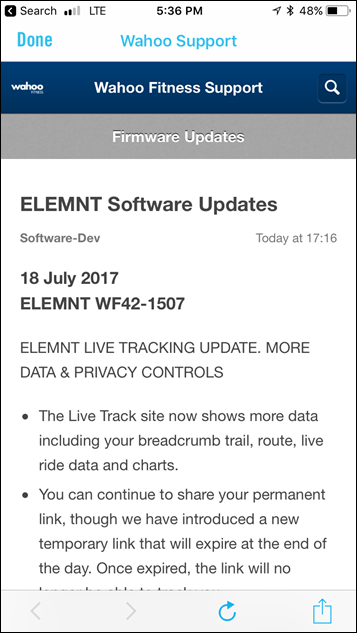 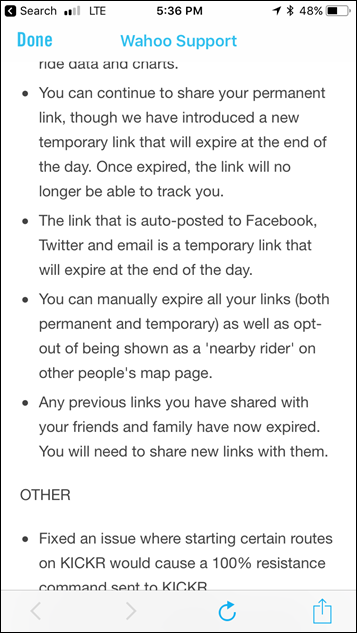 Next, you’ll dive into the Live Tracking options on your app (Share Tracking Link, after enabling ‘Live Track’).  You’ve got three options within that:

Share Until End of Day: This simply shares that link until midnight. This is useful if someone clicks on the link afterwards, at least they won’t just get a random error.

Share Forever: This is as it implies, the link is good forever.  Meaning that if a person comes back a week later and you’re on a different ride, then they can see where you are then.  Obviously, be careful with this type of link.

Share Automatically: If you hit this, then anytime you go for a ride the app will trigger notifications to Facebook, Twitter, or e-mail recipients.  You can select which, if any of these, get the link.  For example, I have it set to e-mail myself, my coach, and The Girl.  If you’re more of a social butterfly, you could also do Facebook and Twitter.

But there’s also a fourth option – which is to revoke everything.  This instantly invalidates all links, removing access to your cycling stalkers. 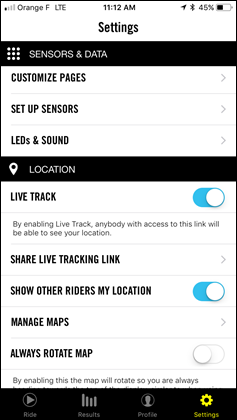 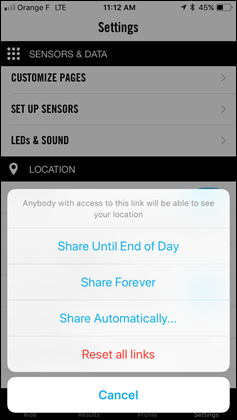 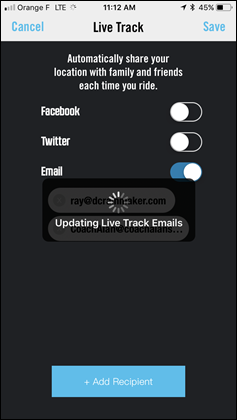 With that, things are basically done.  Seriously, it’s that simple.

Note that if you have any sensors on your bike, do ensure that they’re connected as normal (obviously).  Else, you won’t get sensor data (heart rate, cadence, power). 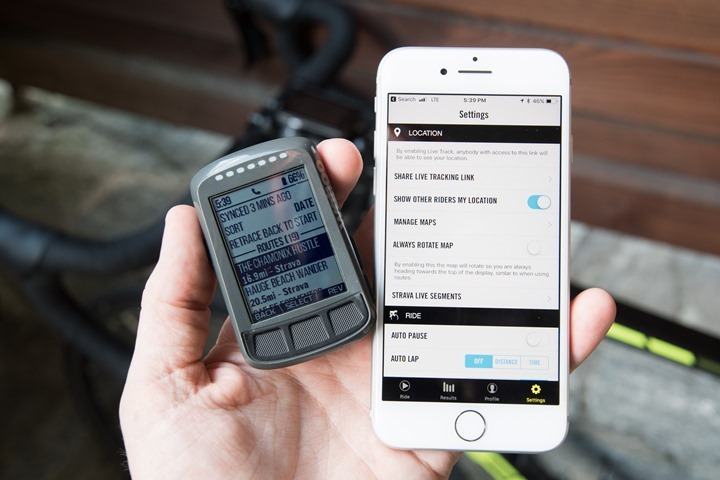 For the most part, you’ll ride as normal here.  However, what’s super important is that you have the Wahoo ELEMNT companion app open on your phone.

Not Open = No Live Tracking.

Of course, you can shut off the screen on your phone and change to other apps, but somewhere in the background the Wahoo app has to be cookin’.

Next to note is that the Live Tracking can display your planned route to others.  This is a big change from Garmin, which can’t display your loaded/planned route.  Below you can see what a route looks like, with my current position and the route.  It’s mostly out and back, so it’s not as nifty looking as a circular route.  But you get the point.

(Side note: You won’t see the planned route on my remaining screenshots due to an odd bug I found with the way I started the live track.  Subsequent starts seemed fine…but, I wasn’t about to drag my butt up the mountain yet again for another screenshot. Wahoo is looking into why the bug occurred via one method but not the other.)

With everything ready, you can press start as normal.  A few seconds later your friends/family/affairs will receive the live tracking link.  Note that in my case it went into my ‘Clutter’ folder in my e-mail, so you may want to check Spam/Junk/Clutter/etc… folders in your e-mail.  Or, tell those who are following you to do so as well.

At this point, if you look at yourself using the mobile site (it’s responsive to different screen sizes), you’ll see your current location without any track…since I haven’t gone anywhere.  You can scroll down to see tabs for the data metrics for different data sets (power, cadence, heart rate, elevation). 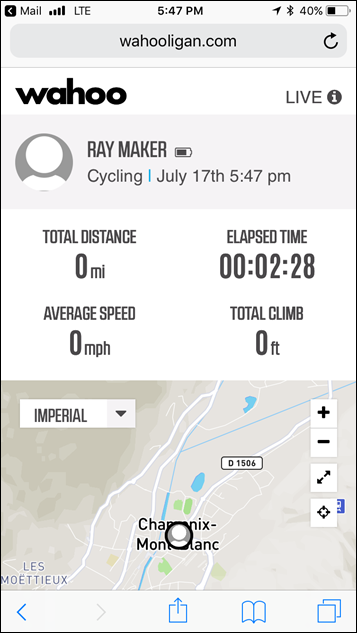 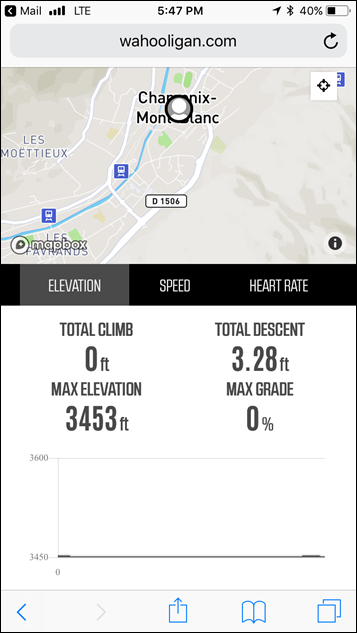 So let’s fast forward (up and) down the road a ton to see what those metrics and lines look like there:

As you can see above, you can dive into all the data sets, as well as averages and maxes.  In many ways this isn’t too much different than Garmin’s site, though Garmin’s app doesn’t show you sensor data on the mobile app – just the desktop app. 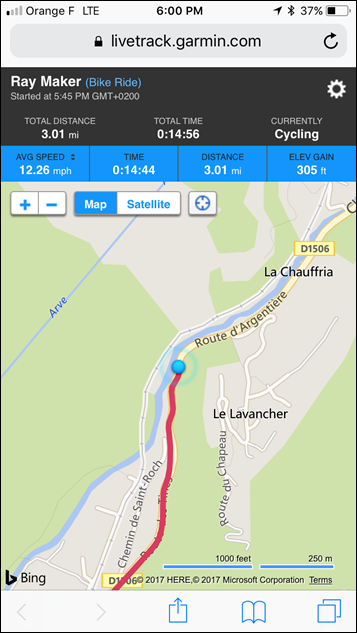 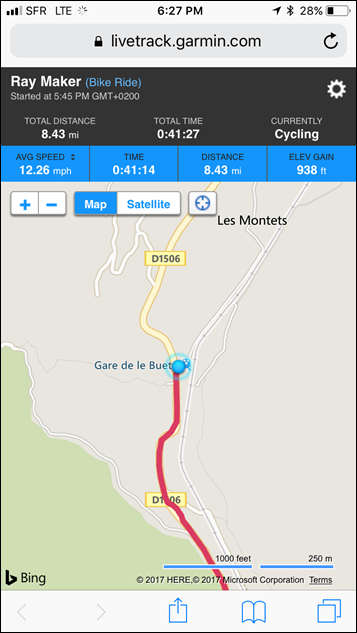 Below on the desktop site you can see the data graphs overlaid on Garmin’s live tracking services, as well as the ability to show all data sets on one graph.  This can actually be handy if you want to correlate something like a hill to why heart rate increased. 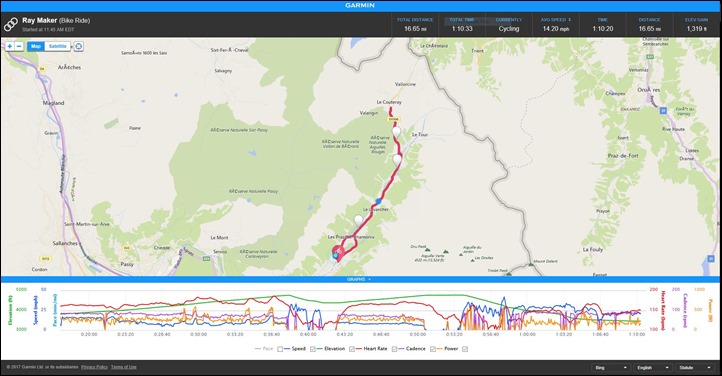 Of course, what’s also obvious is that Wahoo’s app looks more like 2017, as opposed to Garmin’s tracking site from last decade.  Actually, that’s not entirely fair – they introduced it in January 2013…and haven’t changed it one bit since for cycling (seriously, you can go back and look at my screenshots in that linked section).

Which, has always been my complaint about it.  Garmin has had half a decade to improve it in ANY way possible.  I can think of and have noted plenty: Adding planned/loaded route to overlay, snapping to a known race course (i.e. Ironman course when using a wearable), allowing you to add photos mid-route via your phone (many people do that with Strava today), having better graphs, displaying Strava segments on it as you hit PR’s, displaying fun stats like you hitting distance/wattage/etc PR’s (which Garmin knows too), showing battery status of the Garmin device or phone.  Need I give more examples?

But there is one thing that Garmin does that Wahoo doesn’t: Numerous and better map providers.

Wahoo uses Mapbox for generic terrain maps, whereas Garmin allows you to choose between Garmin, OSM, and Microsoft (Bing) maps, as well as satellite or road maps from either Google/Microsoft source. This can be useful in seeing what’s around you.  For example during today’s ride when it’s neat to see the snow-covered mountain passes of the French and Swiss Alps I was riding through: 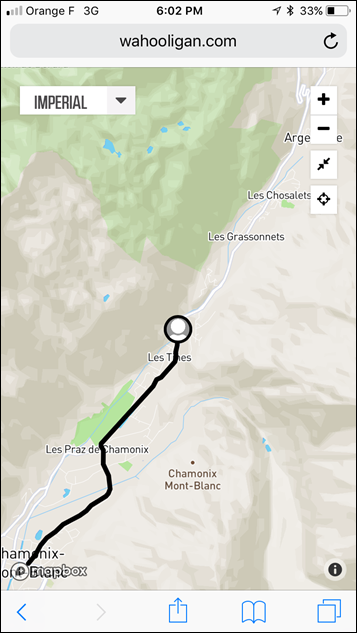 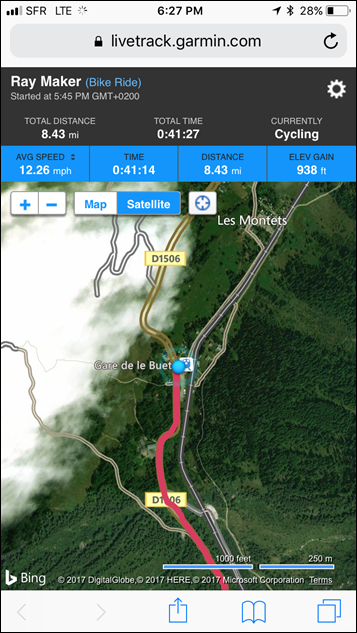 This is of course because Garmin is paying for accessing these multiple semi-costly mapping services, whereas Wahoo is using just one…and a really darn inexpensive one at that.

Looping back to the ELEMNT though, one early complaint a while back was that the mobile/ELEMNT connection wasn’t very resilient to cellular connectivity drop-outs, causing the tracking session to outright die.  In this case though, it seemed to do well.  I went through areas where cellular connectivity dropped out and I had no issues with the service resuming properly.  Also of note is that on the Wahoo site it’ll show you battery status of the device, which is kinda neat (seen below left image to the right of my name if I hover above it).   Further, on the right image you can see how ‘old’ the data is – 19 seconds in this case. 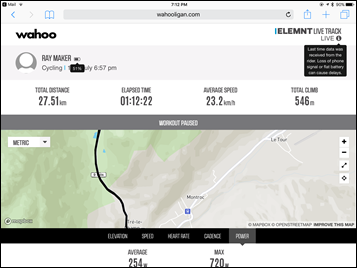 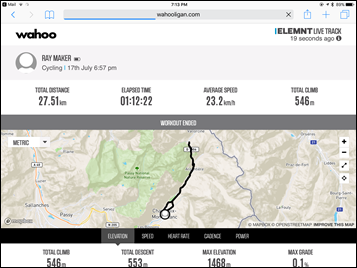 Overall, it worked fairly well aside from the initial route overlay quirk I ran into, and the graphs are just a heck of a lot nicer to look at.

One other oddity though I did notice though was that the final numbers between the BOLT device and the Live Tracking site were slightly different.  Not hugely different, but slightly different – a few watts off for the max power for example.  They were substantially off for the average power, but that appears to be a case of the Live Tracking site displaying average power with zeros not recorded, whereas my BOLT with zeros recorded.  I could see how that’d be a little display preference quirk. 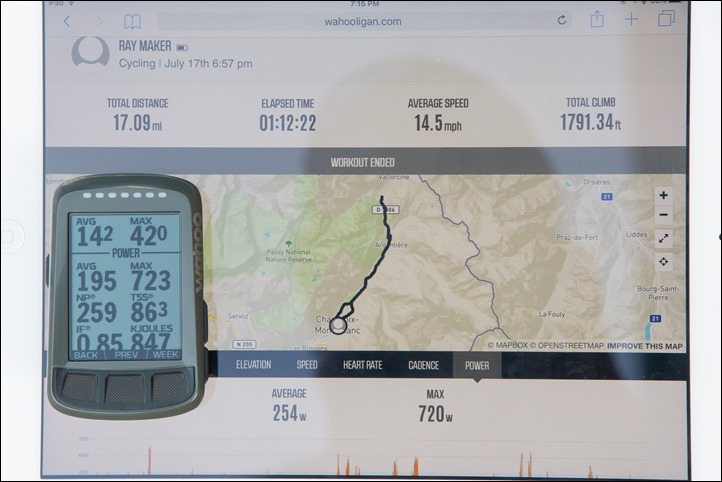 In talking with Wahoo, they’ve identified the root of this bug and it’s set to be fixed next week (behind the scenes on the web platform).

Overall this is good stuff and great to see them moving the goal posts forward.  In many ways this kinda reminds me of last summer when Wahoo added Strava Live Segments integration to their ELEMNT.  They weren’t the first (that was Garmin), nor the most timely, but when they did it – they really did it right (and have recently improved it a bunch last month).

It’s sorta like this for Live Tracking as well, they weren’t first, but overnight they’re the best now in that category.  Do note that while I think Quarq’s Race Intelligence and their standalone Qollector service is better in many circumstances, it’s not a head unit but rather a standalone tracking device – so a bit different use case and grouping here.

Also, some might ask why you’d use this instead of just a phone app.  The main reasons are simple:

A) It doesn’t impact your phone battery by polling GPS every second (that’s off-loaded to the BOLT), which is an insta-killer
B) It can collect sensor data that your phone likely can’t (such as ANT+ data on an iOS device)

Of course – I’m sure there will be some who want Wahoo to focus on other items with this firmware update.  And they did too – such as Strava accuracy improvements and a bunch of other random things. And they delivered a big firmware update last month too.  Which doesn’t take away from Garmin doing frequent almost monthly Edge series updates as well.

What’s cool here is the segment continues to improve and we’re seeing a lot of great competition from a lot of players, be it Wahoo, Lezyne, Polar, or soon other startups like Hammerhead.  And all that’s great for consumers!