Ahh yes, Christmas weekend!  We ended up packing in quite the pile of stuff over the last few days, far more than normal.  Albeit, mostly non-fitness related stuff.  Instead, it was more about enjoying the holiday period.  Here’s what went down!

First up on our weekend was heading to the zoo.  Now this may seem like a bit of an odd thing to do in the middle of December, but in actuality it made perfect sense (on paper anyway).  The zoo had Christmas lights all strung up, as well as a skating rink.  Plus you could still see some of the animals.  For example, these creatures: 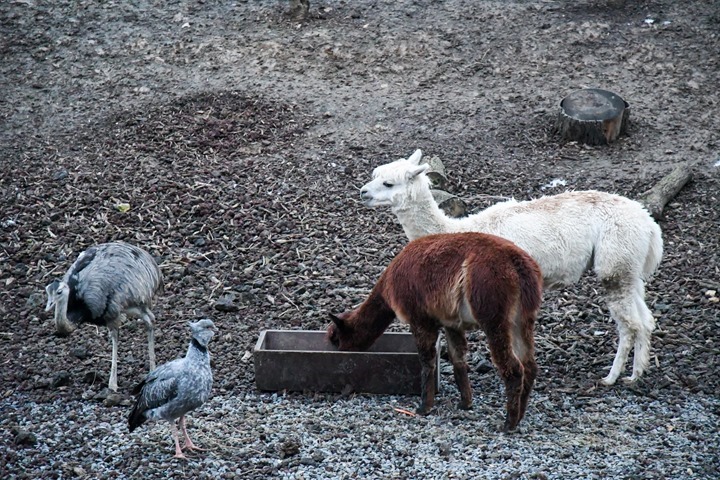 (I believe those creatures were alpacas, though they were mixed in with some other ones.  Plus, obviously the birds aren’t said alpacas.)

The highlight of said creatures were the penguins. 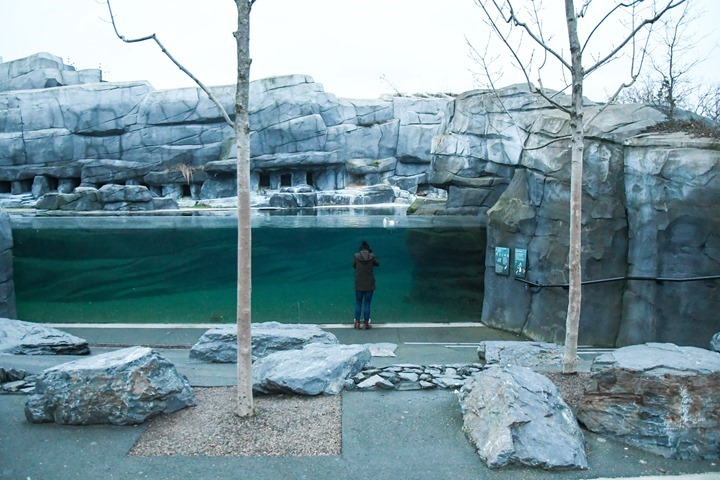 At least for The Girl: 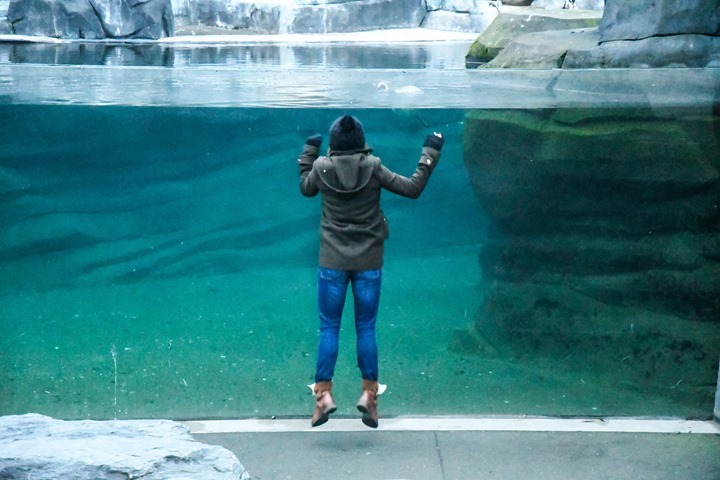 She loves penguins, and so she was pretty excited that of the handful of animals that were on display between the entrance and the skating rink area, they’d be along that path. 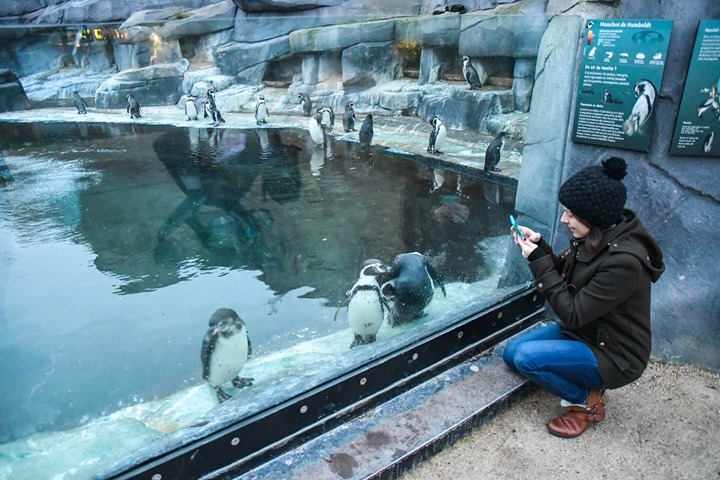 Speaking of that skating rink, we found it: 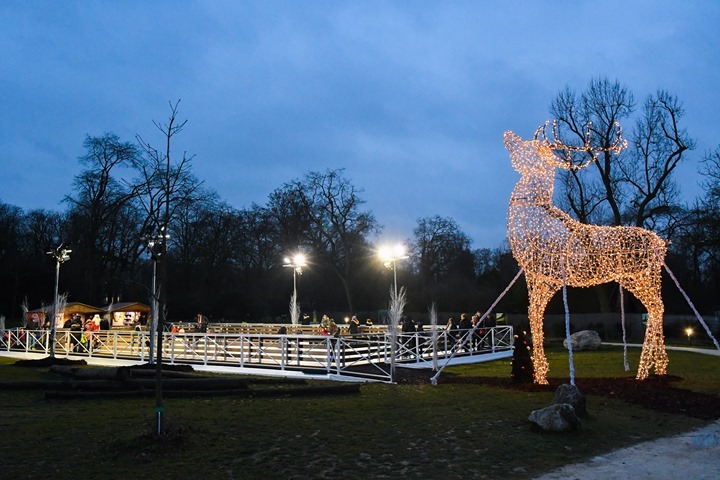 And…umm…it wasn’t very big.  For that matter, neither was the whole ‘lights’ thing.  Good thing we only paid 5EUR to enter! 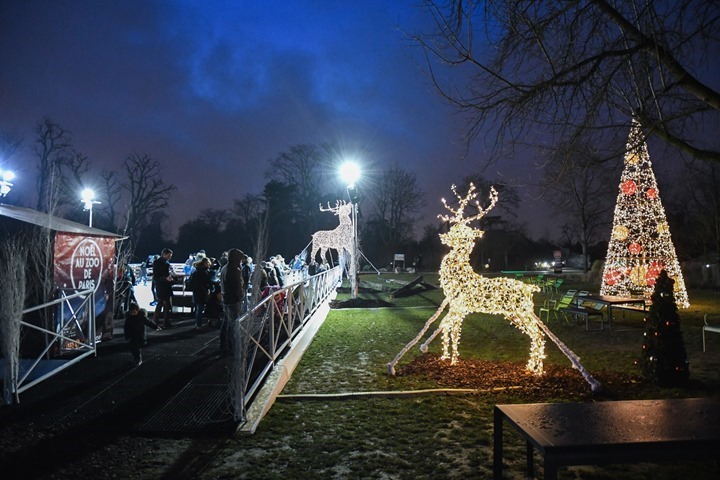 It’s quite a trek to get to that part of Paris from where we live. Still, it was a fun journey and (brief) evening, even if the lights needed an extra 50,000 or so bulbs.

2) Off to the market

While grocery stores may be open in the US on Christmas Day for a few hours, that’s certainly not the case in central Paris.  The place shuts down like a locked porta-potty in the middle of a long-run.  So we did all our Christmas Day meal shopping on Saturday instead, the bulk of which we got at the outdoor market behind the house. 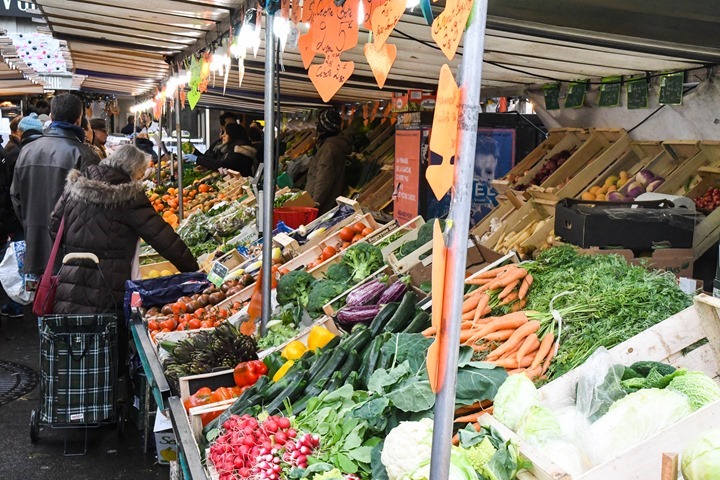 That includes olives from the olive man, and cheese from the cheese man.  And of course, wine from the wine man. 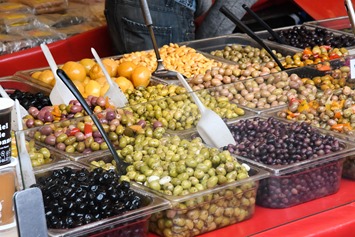 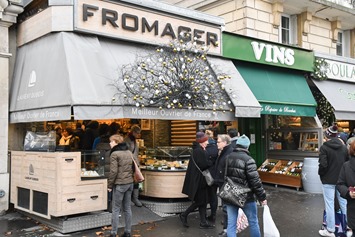 Then we hit up the butcher lady as well as the vegetable lady. 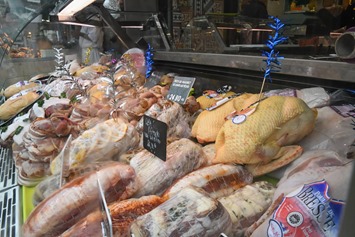 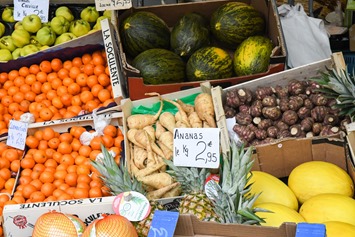 And last but not least, off to the boulangerie for bread.  Albeit, mostly for bread this day.  Can’t be using no day-old baguettes the following day. That’d be uncivilized.

Oh, and this was my little helper.  And by helper, I mean she smiled and giggled at all the old ladies and got us free stuff and bits of extras. 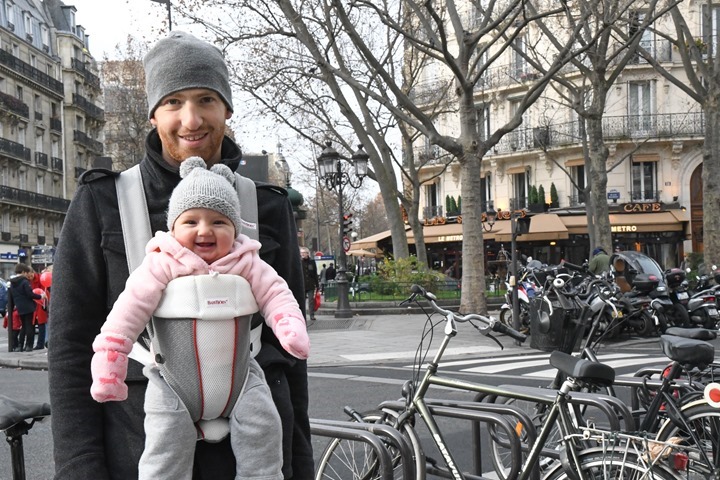 See, it’s handy to have a helper hanging around.

After wrapping up at the markets we picked up a Zipcar to head out of the city.  Not just any Zipcar, but Waldo. 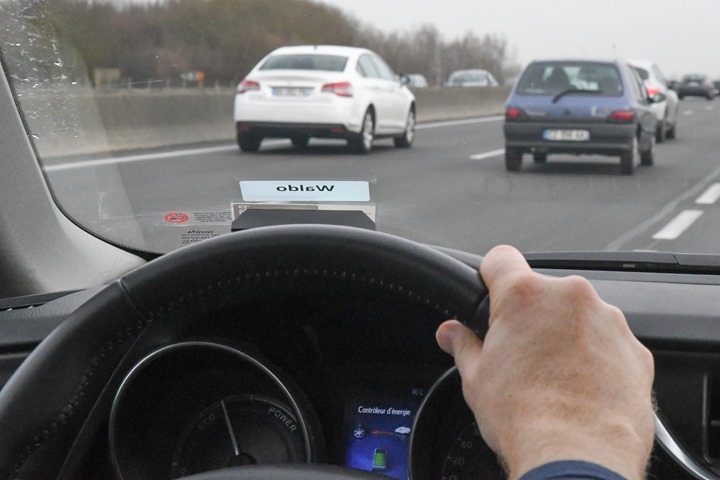 I’m not sure if it’s the case in the states, but in France, every Zipcar has a name (and a specific home parking spot).  This is Waldo.  We’ve taken him a few times before, since he lives in one of the closer parking areas to us.

We were of course on the way to Disneyland.  Much to the amazement of many of our friends, we’d never made it to Disneyland Paris before.  It’s actually reasonably straightforward to get to, and pretty quick – about 30-35 minutes.  Or, about 2 hours or so by bike. 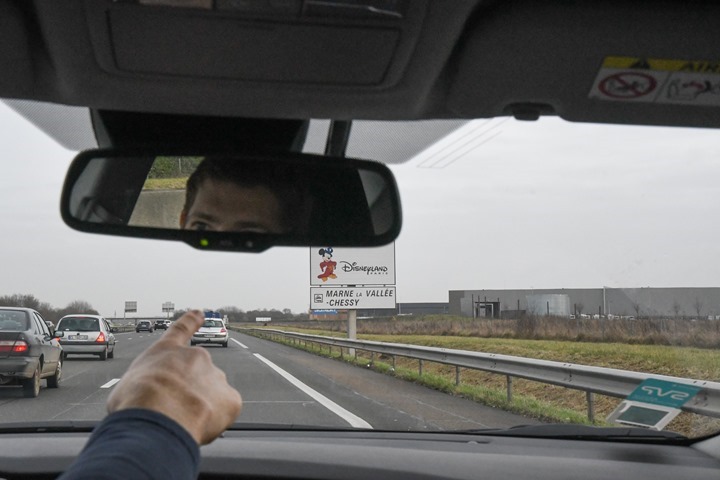 The main appeal of going to Disneyland in the cold and barren winter is that they light up the whole place with Christmas lights and decorations. 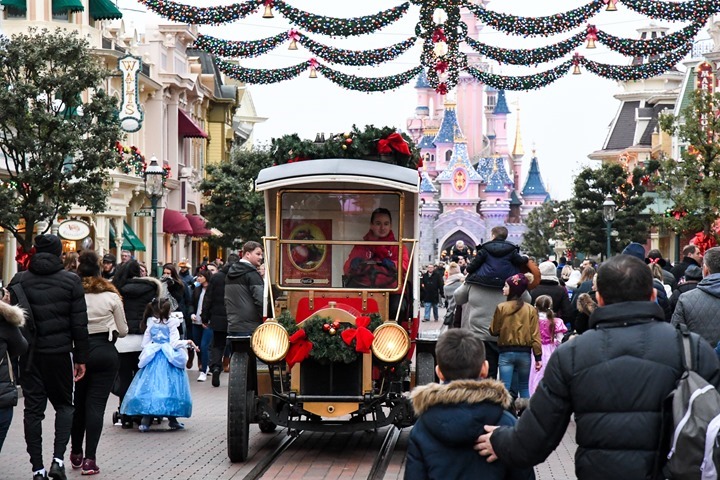 But, despite that, it wasn’t overly crowded.  Except for Main Street I suppose, but nothing like I suspect it is in the summer on a weekend. 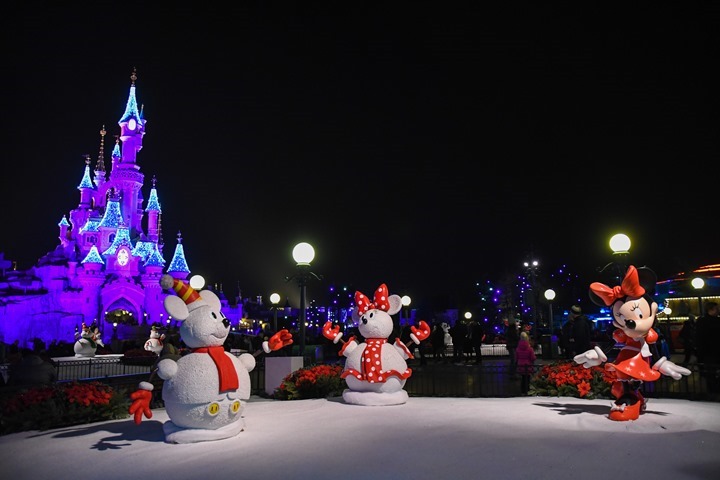 Unfortunately I don’t have a ton of pictures…because I managed to grab two dead batteries for my DSLR.  Thus things were pretty much limited to the above and The Small World. 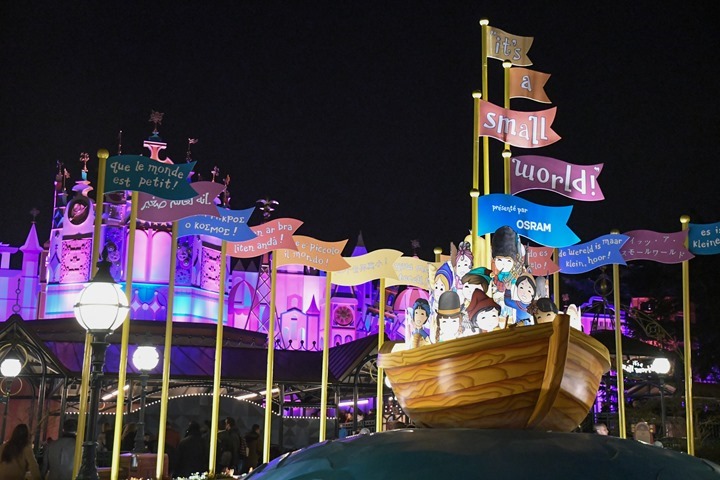 Still, we had a good time just relaxing and wandering around.  Obviously having the little one with us meant we didn’t go on too many rides, but still, it was nice.  We traded off later in the evening once the park emptied out a bit and there were no waits at all.  So one of us would run in and do a ride while the other held onto the Peanut.

And yes, she seemed to enjoy it too. 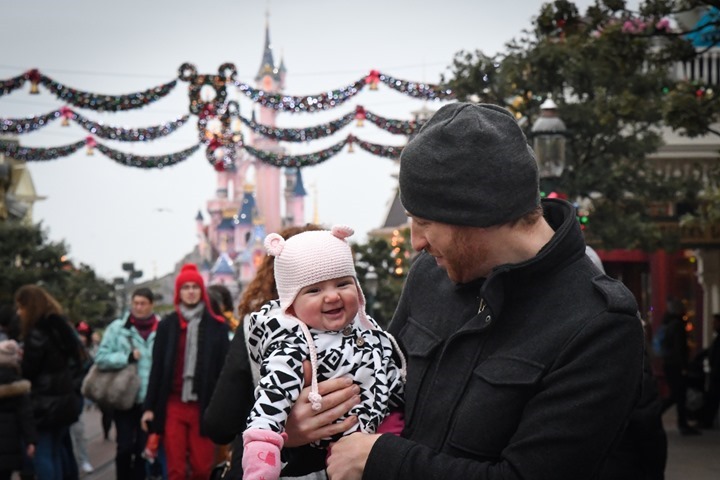 4) Then there was Christmas! 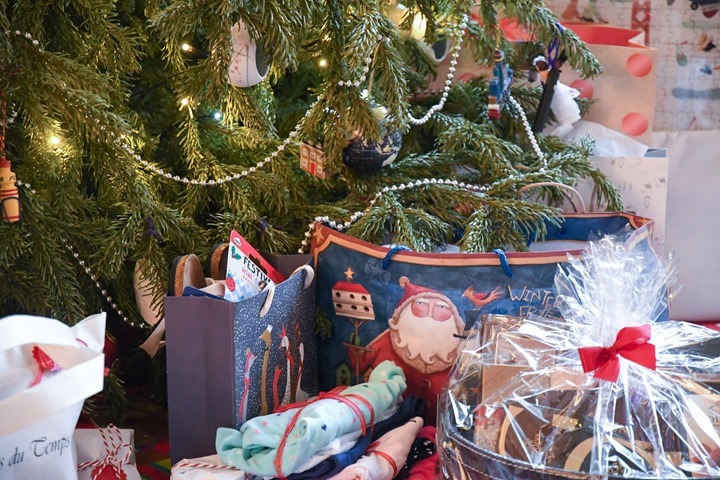 Of course – Sunday was all about Christmas!  We enjoyed the day hanging out at home, cooking various meals, and just relaxing.  Even Lucy got a treat or two.

Albeit, our Christmas tree is starting to sag a bit.  Yes, the one we brought home via bike.  Not a strong contender this year unfortunately.

Of course, we couldn’t end this without talking at least a little bit of food!  After all, I showed you the market.  Now keep in mind it was just The Girl and I.  Well, plus The Peanut and Lucy.  But baby isn’t exactly eating a Christmas ham yet, and as much as Lucy would love to…that wasn’t in the plans for her dog bowl.

To start off brunch I used a bag of leftover oranges to make some fresh squeezed orange juice.  We got one of these commercial-quality juicers for the bakery, and it works brilliantly on our kitchen counter as well. 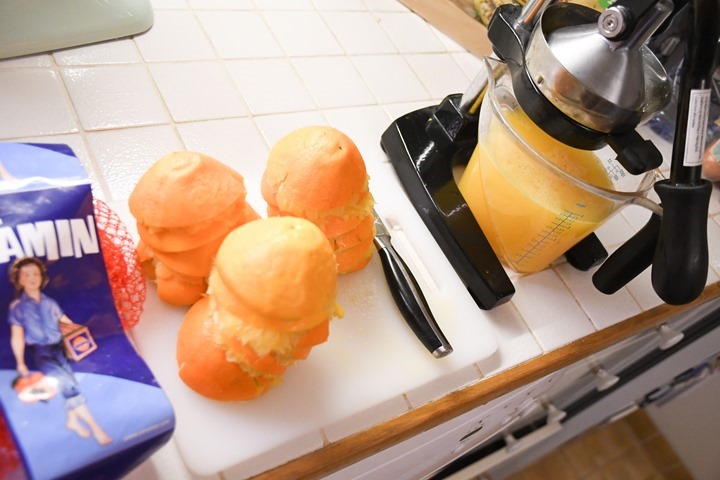 The previous night The Girl had made an Apple-Chorizo risotto, so we took some of the leftovers and repurposed them on Christmas morning for brunch.  We added some bacon from the butcher, and a fried egg on top.  The perfect combo. 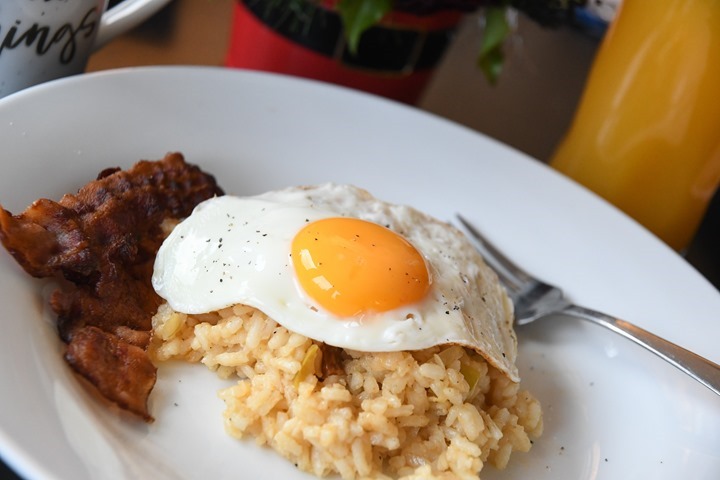 Then for that evening’s dinner, I made filet mignon.  I reduced some red wine, and then made a thyme mushroom bacon sauce.  Plus some quick almond green beans on the side. 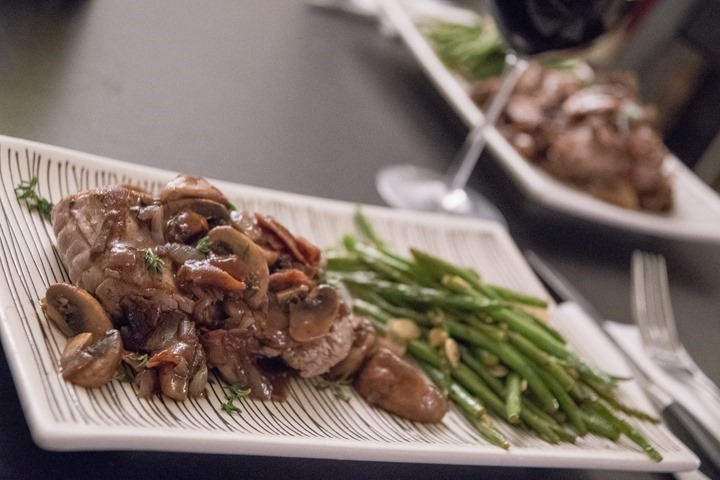 As for dessert? By this point, it ended up being quite late in the evening – so chocolate would have to do.  There was a fair bit of that under the Christmas tree, and no reason to let that get stale.  Right?

Hope everyone that celebrates it, had a Merry Christmas.  And for everyone else – hope your weekend went well!