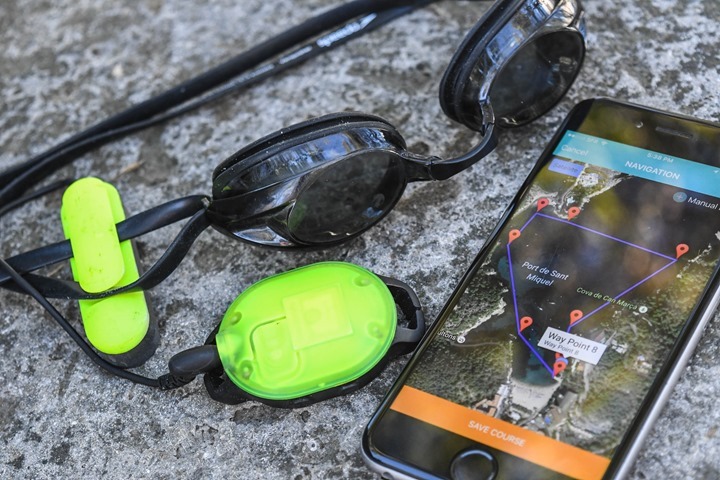 I mentioned yesterday in my Ibiza weekend post that I had used the Marlin GPS swim meter during one of my recent openwater swims.  I figured I’d put together a short post to dive into a bit more detail on how it works, before their Kickstarter campaign officially closes tomorrow (almost exactly 22 hours from when I’m posting this).

I didn’t exactly realize their Kickstarter campaign was closing so soon, else, I’d have gotten this up over the weekend.  In any case – this should give you enough insight to make a decision on whether you want to join in their campaign now, or wait until later when they ship.  So let’s not waste any more time…time to begin!

So, what is the Marlin?  Well basically it’s both an openwater and pool swim tracker.  Indoors it’ll use accelerometers, like most swim watches, but outdoors it’ll use GPS (also like most swim watches).  But the key difference between the GPS here and the GPS on swim watches is that the Marlin sits atop your head.  This gives you better GPS accuracy than algorithms that try and figure out where you swam based on taking lots of less-accurate data from your wrist (GPS points in between swim strokes).

The hardware itself has two pieces connected by a small cable, similar to that of swimming music players.  One roundish pod has the GPS module and battery, while the longer secondary pod has the audio module.  Yup, it talks to you as you swim.  The audio portion attaches to your goggle straps on the side near your ear (but not on it), whereas the GPS pod sits behind your head facing the sky (also on the straps). 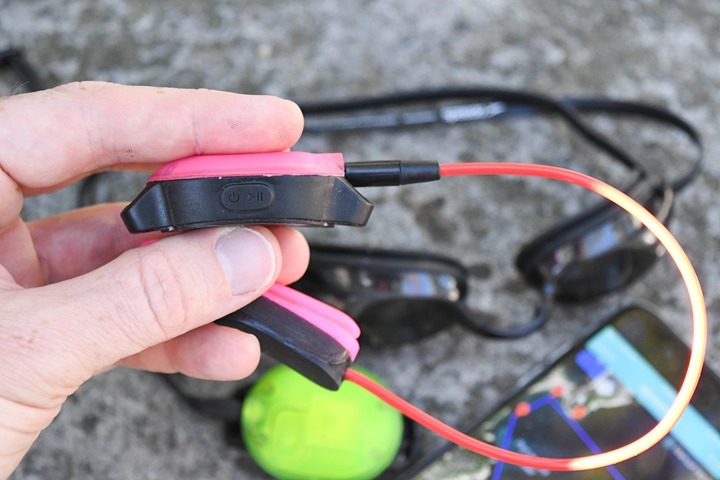 While you swim it’ll give you stats about your workout – such as pace, distance, and time.  This helps the device to overcome the lack of a display.

Now one of my big gripes about dedicated non-wrist swim trackers (such as the much older FINIS Hydrotracker) is the lack of clear-cut buttons and feedback on whether the unit is recording or not.  Or whether it has GPS.  Or whether it’s paused. It sounds simple, but it’s super frustrating to go for a swim and not have 100% clarity on whether or not it’s recording.

In the case of the Marlin, it’s got four dedicated buttons.  A power/mode button, a start/pause/stop button, and two volume/selector buttons.  Oh, and it yells back at you exactly what mode it’s in – and even if it’s searching for GPS still. 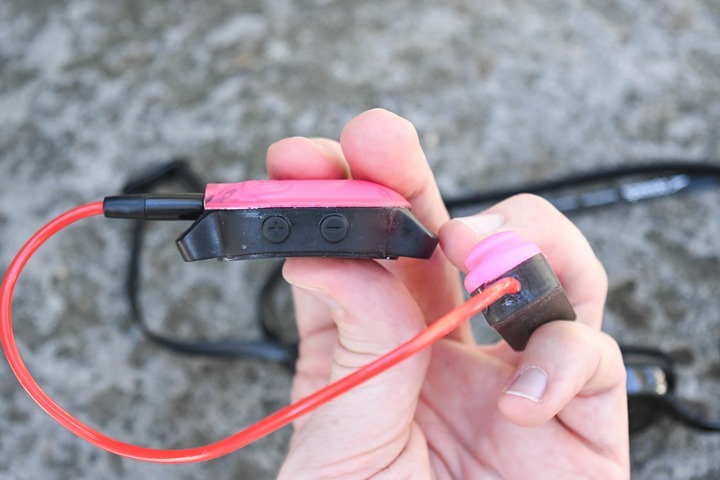 The unit uses bone conduction to make the audio clear despite being underwater.  The small pod just rests against your head and you’re good to go.  This is the same technology used in numerous swimming music players that I’ve reviewed in the past.  All of which connect via waterproof connectors in the same audio-jack style ports that you’ve known to love for the past few decades: 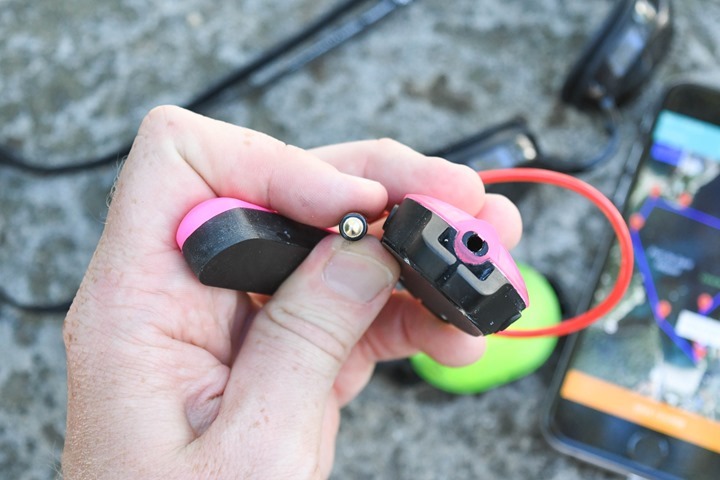 The unit charges using a small charging cable with any available USB port. 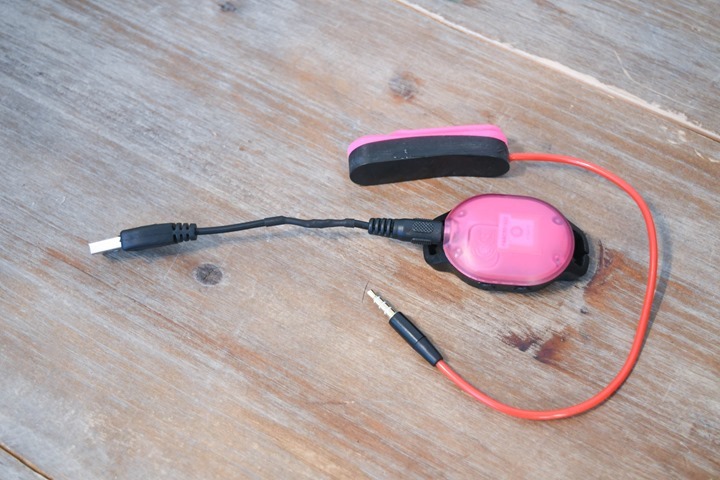 The total weight clocks in at 41g.  Though, this being a pre-production device, that’s 100% likely to change, since it has 3D printed parts on it. 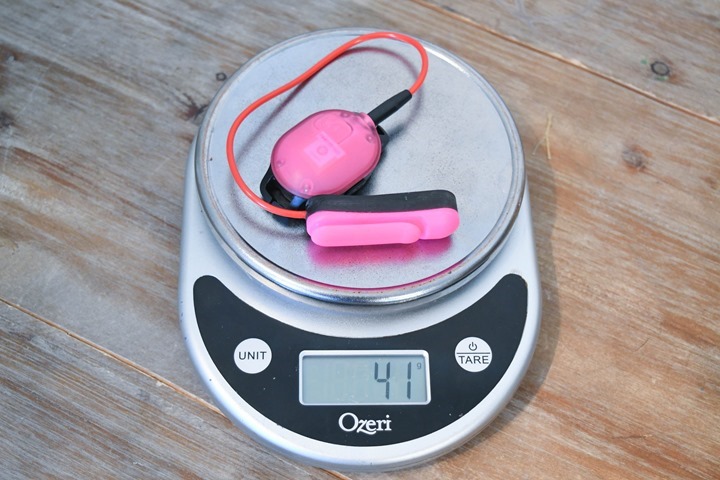 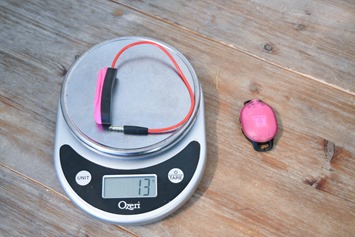 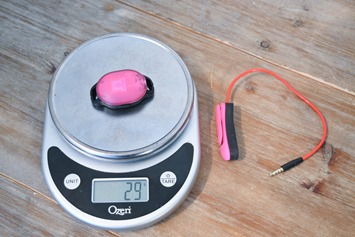 (In case you’re wondering how these two components weigh more than the sum, it’s simple rounding on the parts individually up to the nearest gram.)

Now the one downside is that despite having all the core components to playback music, there’s no music storage or playback.  In my opinion that’s a bit of an obvious oversight, as putting in a small 4GB storage chip would have cost almost nothing, but have greatly increased desirability for the product.

The unit has an app that’s fairly well developed for being 4-5 months out.  The app connects to the Marlin via Bluetooth Smart, and then allows you to configure settings for the device. 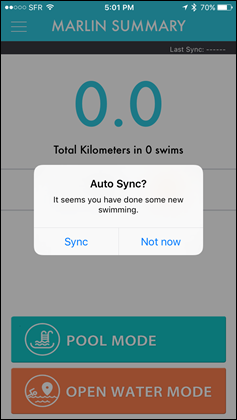 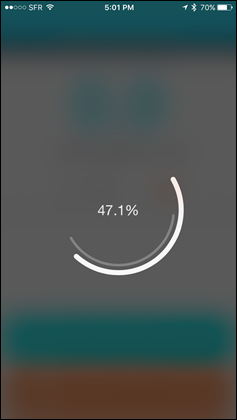 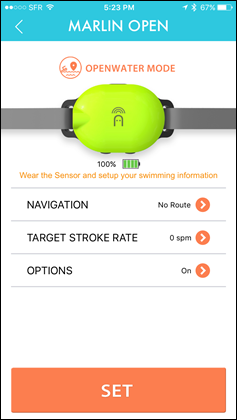 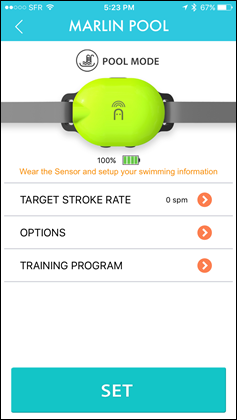 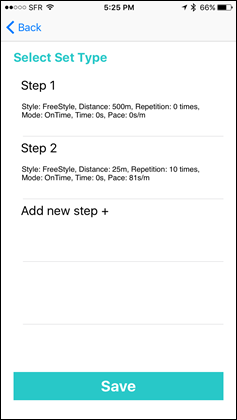 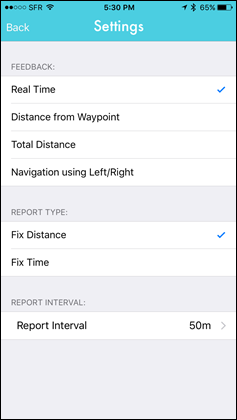 Note that while my focus here has been primarily openwater, the unit does work in the pool as noted above.  However, it’s important to be clear there are two versions of the unit: A pool-only option (sans-GPS), and a dual pool/GPS option.  Given the cost differences are pretty small, I’d just go for the dual version. 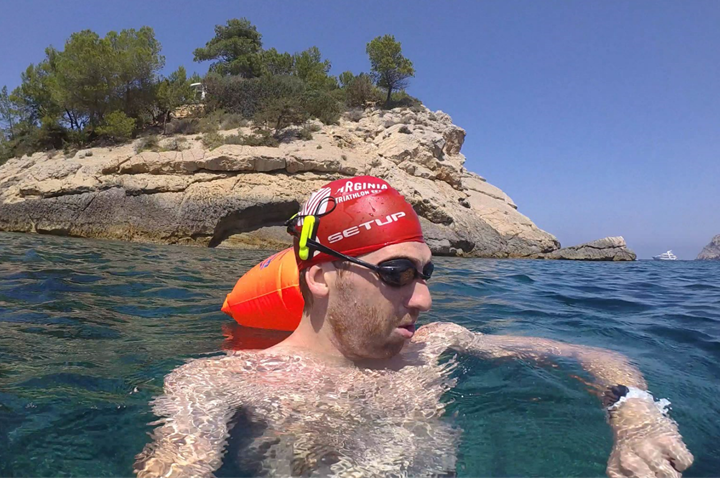 I took the unit out for a test over the weekend creating a route to navigate around the bay.  The app has a super simple tap to create style map system, allowing you to quickly draw up a map of where you plan to swim.  As with any time you create routes around water, be sure to use satellite view, else you may end up swimming over rocks in standard map views. 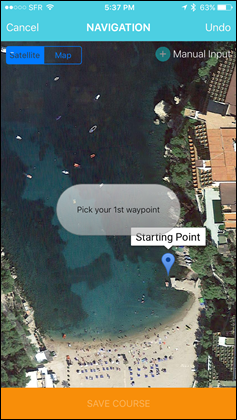 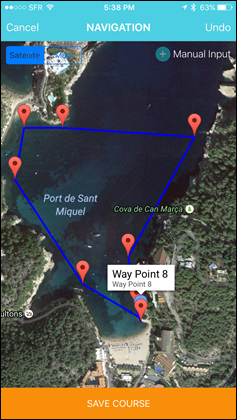 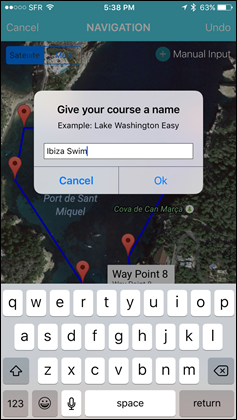 Once you’ve created your course, you can go ahead and send it to the Marlin.  When you do this the Marlin will actually audibly confirm that it has received the settings and waypoint/route details, which is kinda a nice little touch. 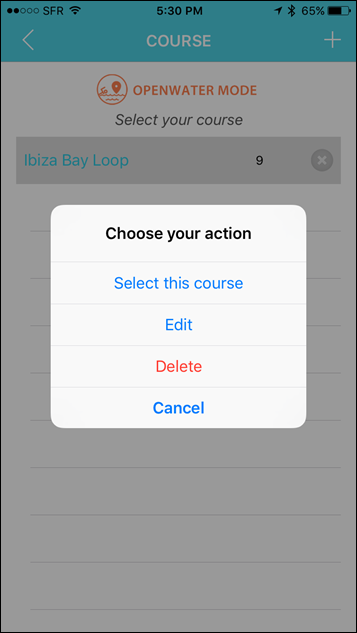 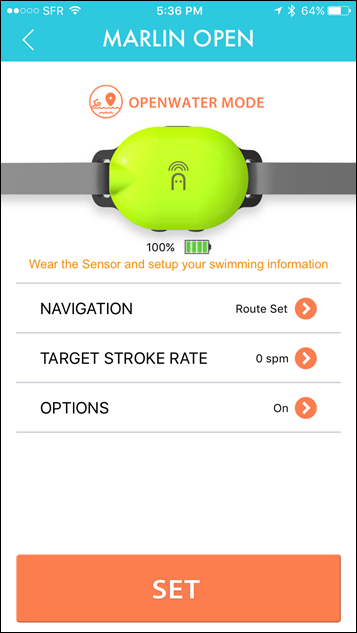 Once you’ve found your way to the starting point, you’ll turn on the unit and switch to openwater mode.  At which point it’ll immediately start looking for GPS.  Like most GPS devices I found that if it was the first time I’d gone to that location it took a bit more time (about 1-2 minutes in total), whereas subsequent satellite acquisition from that location took mere seconds.

Before you left you’d have used the app to specify which openwater swim route you’ll be using (if any).  You can also specify the audio announcements interval and other audio feedback settings.  It’s all pretty straightforward. 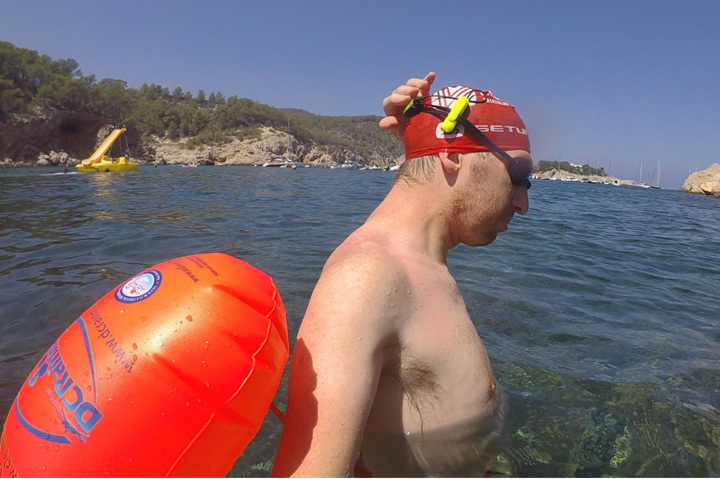 If you don’t remember exactly where you set your course up to start from (such as starting from a random point on the beach), the unit will actually give you directions to the starting point, which is kinda nifty.  Once you begin swimming the route, it’ll give you directions to stay on course by telling you whether to swim to a given clock direction – i.e. ‘Swim to 10 o’clock’, or ‘Swim to 1 o’clock’.  This works surprisingly well.  There’s also an option for getting swim instructions as simple left/right, though I haven’t explored that piece in the water.

During the swim the unit’s GPS distance matched spot-on to what my watches were showing me, especially during the first straightaway section.  It was pretty cool.  I had configured it to notify me every 50 meters, giving me my total distance.  The audio announcements were somewhat normal up to 1,000m, and then got a bit wonky after that as it would pronounce 1,550 meters as ‘One Five Five Five Zero Meters’, which makes you concentrate extra hard on decoding the distance.  Hopefully they’ll be able to address that in the ample time they have to release.

Following my swim I hit the end button to stop the swim.  In theory, this would have saved the swim and produced a pretty swim route graph like the screenshot from their Kickstarter page. 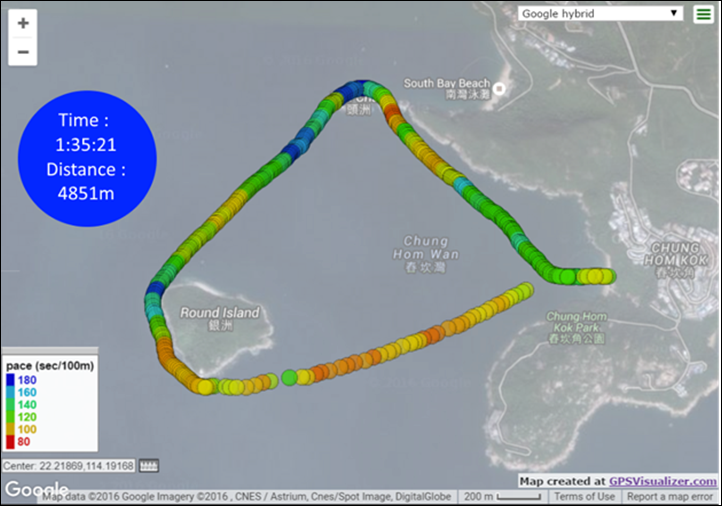 But in reality, that didn’t happen.  My swim went somewhere, but it’s not syncing to the app at the moment.  A bit of a beta bug I’m guessing, and obviously a fairly disappointing one since I like pretty maps a lot.

Here’s a bit of a video recap of the above swim:

I also included in that video the route creation process as well as the sync process, to show you how it works. 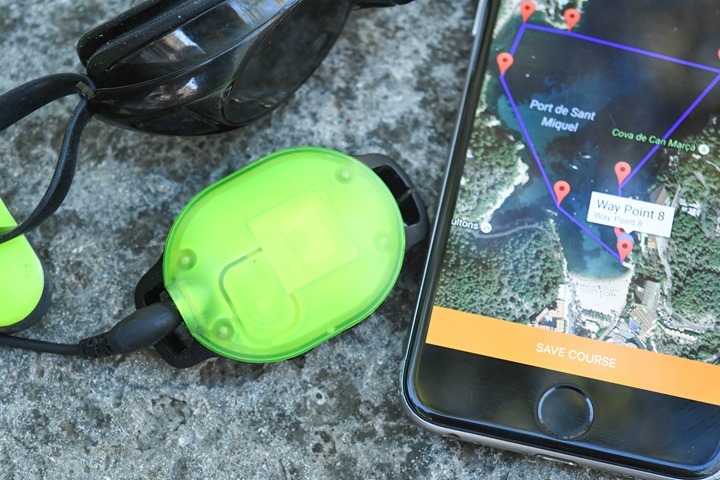 Overall, for a $90 device on Kickstarter ($150 at retail), I’m pretty impressed with it.  I like the assortment of buttons on it, and the audio feedback is super clear, both for general use confirmation (i.e. which mode you’re in), but also while swimming openwater.  Not to mention that they’re still 4-5 months away from shipping, and this feels like they’re closer to 45-60 days of polish.

Of course, this is only a single swim – and one that didn’t go perfectly after the fact with the app.  I also haven’t tested the pool swimming portions yet.  And being a Kickstarter/crowd funded device – you never quite know how it’ll turn out and what type of delays they might have down the road.  If you haven’t done Kickstarter projects before, I encourage you to read this post I wrote on the risks of it.

But still – for a relatively (or totally) unknown startup – they’ve done good.  Just don’t forget that unfortunately their campaign ends in 22 hours.  While they’ve already achieved the minimum goal for production, usually more funding helps keep the project on track.