A Long Weekend in Ibiza

Ahh yes, Ibiza – famed locale for foam parties, alcohol-fueled escapades, and stunning beaches and water.  A place where unattached 20-something’s across the world flock.  And thus obviously the perfect place to go with the little 6-week old nugget for a short getaway.  While most Parisians would head out of town for 2-4 weeks, we went with 4 nights worth instead.  It’s all we could fit in to a busy late summer schedule.

At a bit over a month old, it was time for her first flight. We had done a much longer 5+ hour train ride back a few weeks ago down to Cannes, and that went exceedingly well.  But we figured this flight-inclusive trip would act as a bit of a test/trial run before some transatlantic flights in September.  Much better to figure out the faults in the baby transportation methodology on a 90-minute flight than a 12-14 hour travel day.

We headed to the airport crazy early.  Like, I think they were still checking in people for the day before early.  But, she seemed content with the whole check-in and ticketing process.  Yes, she’s actually holding onto her ticket and passport.  Though, since this was intra-EU she didn’t even get a stamp out of it! 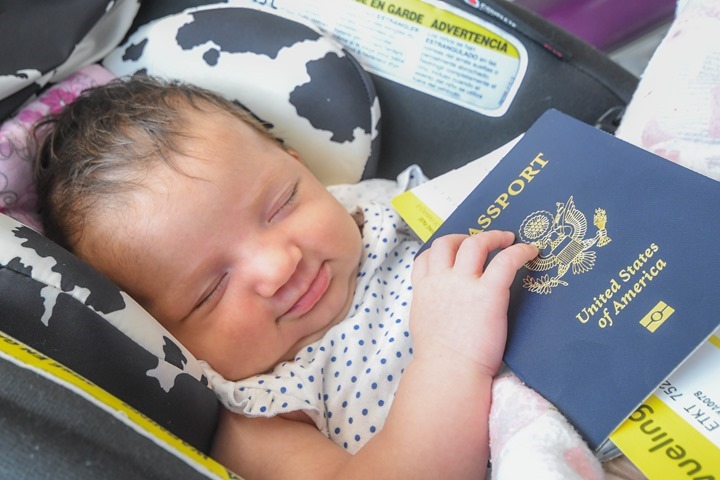 More important than the check-in process was the actual flight itself.  She pretty much slept through the whole thing.  Apparently she didn’t see any reason to stay awake at that time of the morning, and thus just kept on sleepin’ in.  All the way to Ibiza, off the airplane, through the baggage collection process, and into the taxi.  At which point all hell broke loose when she realized she wasn’t in France anymore. 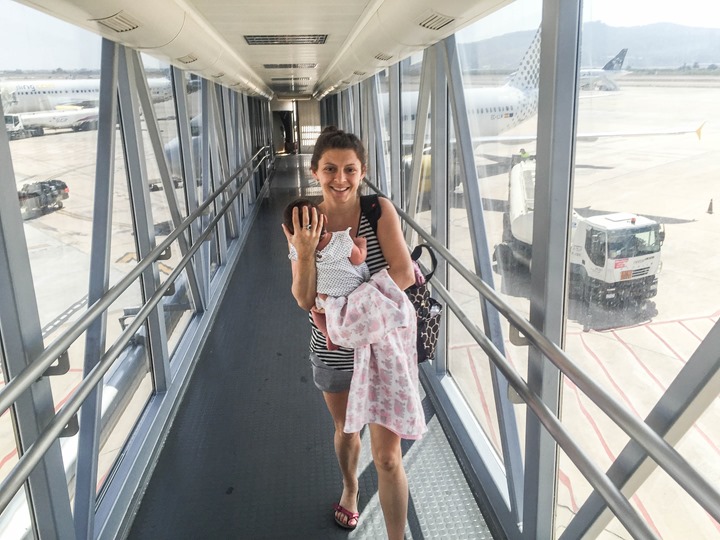 No worries, once we started driving she was happy again.  She loves any transportation method – car, plane, train, stroller.  Anything with movement and she’s a happy camper.  Cobbles are even better.

As for her parents, we were happy campers with our room’s view – boom! 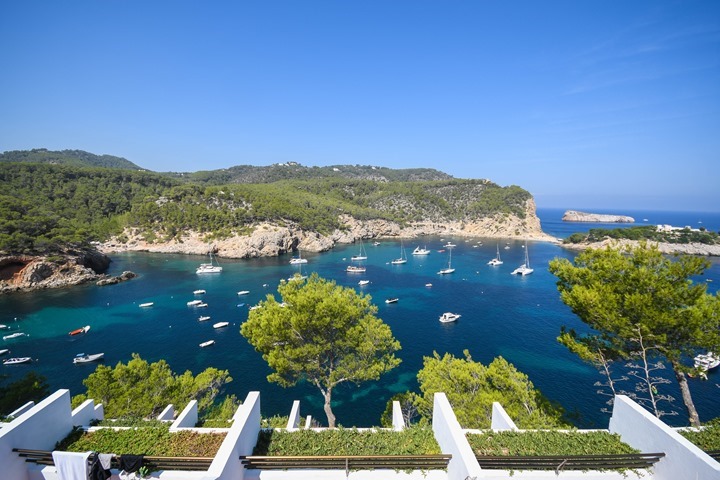 And as I write this on the plane flight back, she’s pretty much just as happy again.  Looks like she takes after her Dad in the airplane and travel department.

Swimming around the bay 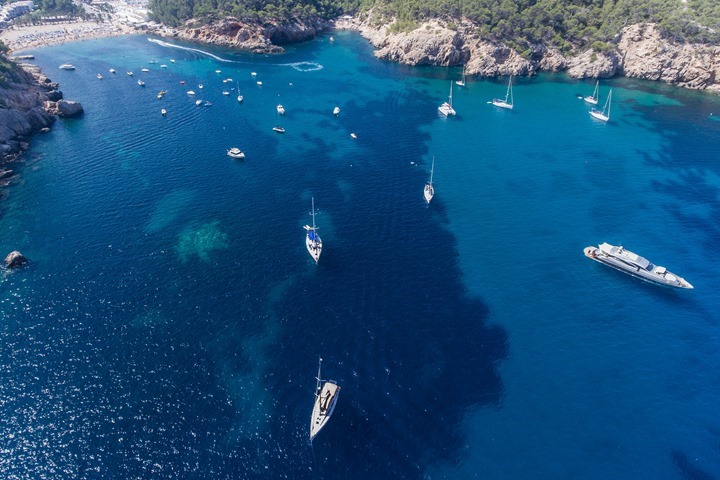 I loves me some beautiful openwater swimming spots, and this definitely qualified.  It reminded me of the many bays we pulled into last summer on our Croatia sailing trip (a trip that yes…I’ve still gotta write a post on).  And this bay had numerous sailboats floating around in it too, as well as other motor boats.  Thus being a prime reason why I used my swim buoy to ensure they saw me as they (and I) puttered about. 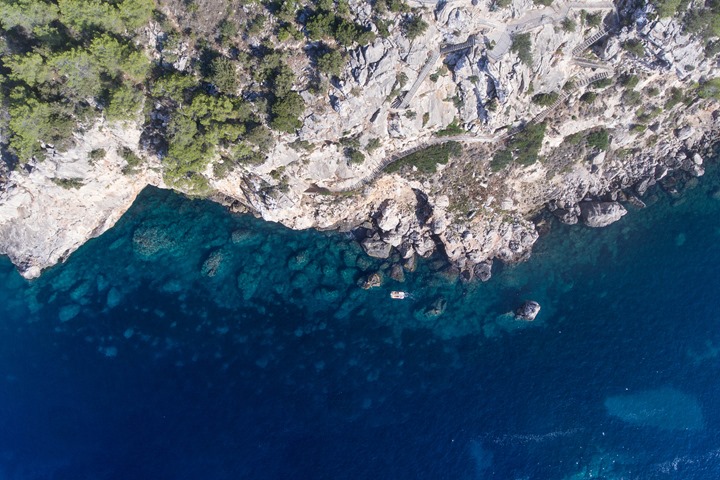 As with every one of the workouts I did this weekend, they were more about gathering data and shots of items than they were about a hard and specific workout (though, the trail running climbs were hard).  For example, on this swim I was testing out a swimming device called the ‘Marlin’, which not only tracks your swim distance via GPS, but gives you audio feedback on it in real-time using bone conduction (like some other swimming music players).  Further, it can give you guidance on a swim course.  I’m actually pretty impressed with it, the app works reasonably well and is easy to use.  I haven’t tested the pool mode yet, just the outdoor swimming mode.

(Sidebar: Their Kickstarter ends in 46 hours…so…go quick!  So far so good.  Given how solid the product is at this beta stage, and they are still 4-5 months out from shipping, I’d have no issues backing it – especially for $90.  They’re much further ahead than most devices I test on Kickstarter. Well done.) 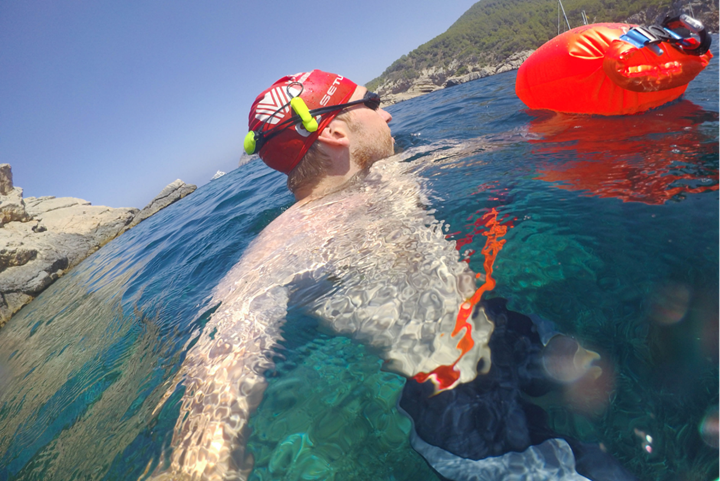 And of course, I had the Suunto Spartan Ultra out there as well (+ a Garmin FR735XT & Polar V800), doing my first openwater swims with that.  That was a bit…rougher.  The Spartan nailed GPS accuracy as long as I was swimming forward – virtually matching within a few meters of the Marlin’s audio announcements (GPS atop my head). 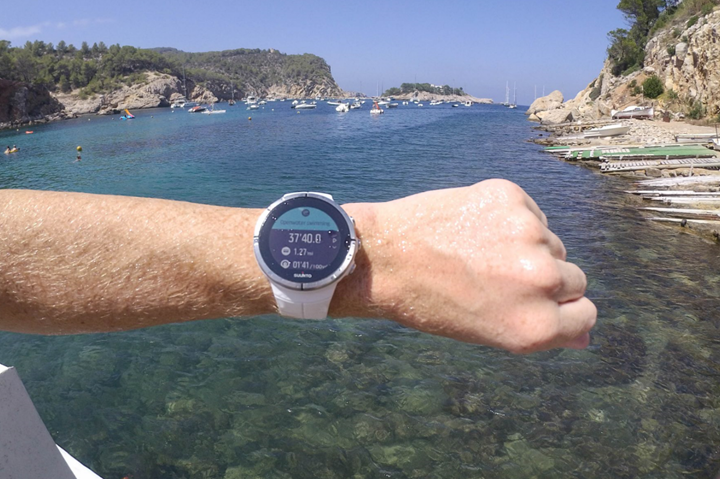 But…the second I stopped swimming (to take a photo, or just enjoy the view) and put my wrist underwater to tread water, it would add hundreds of meters to my swim distance.  Hopefully a bug Suunto can squash. 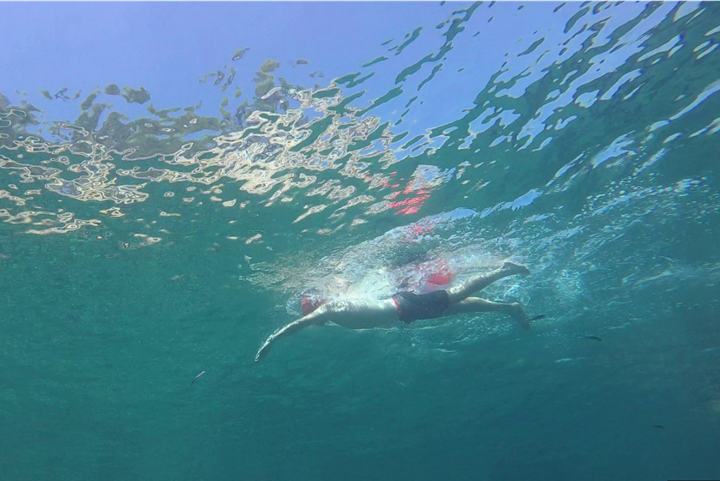 For those wondering, the shots of the bay from above were via drone.  I brought a couple of drones down with me (more on that soon), but these specific shots were from the DJI Phantom 4.  I only spent a few minutes in the air with the P4 on this trip, so not a huge selection to choose from on this unit.  Still my favorite though for getting aerial shots. 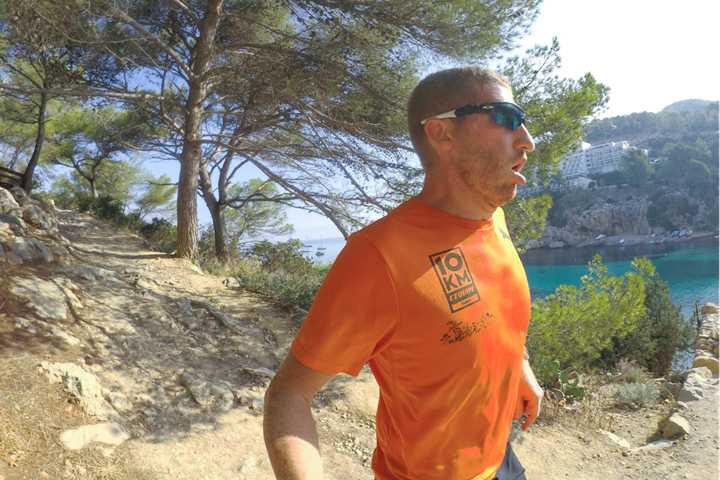 Saturday morning I headed out prior to breakfast for a bit of an exploration run.  I only had about 40 minutes to work with, before the breakfast buffet closed, so it was pretty much an out and back of sorts.  Obviously, missing the breakfast buffet was not an option.  Neither was waking up earlier.

I started the run with a steep three minute decent down to the beach, before almost immediately beginning my climb back up again into the mountains along the coast.  I found that while the trails were occasionally marked, they weren’t actually marked in any meaningful locations.  In such that they marked a trail about 100m after the turn.  So you had to play a bunch of trial and error anytime you came to a decision point on the trail.  So my first run through this area looks a bit rough.  It also meant the trail occasionally dropped down random rock ledges if you followed it wrong – slowing me further. 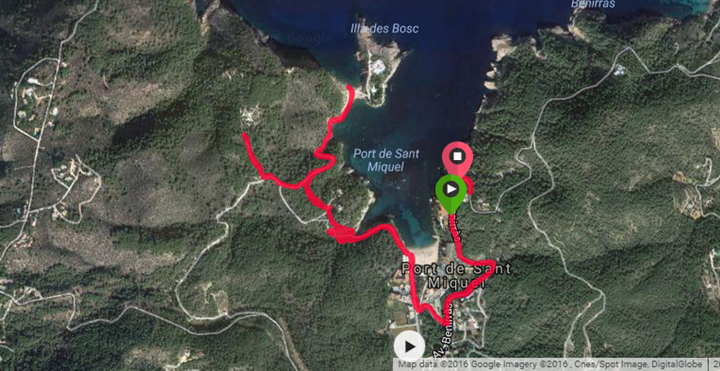 Still, the run was certainly rather scenic – as seen in the pic up above.  Oh, and it was rather hot and humid out for someone coming from the relative cool of Paris.  Gotta kick-up my heat acclimation skills!

Relaxing at the beach 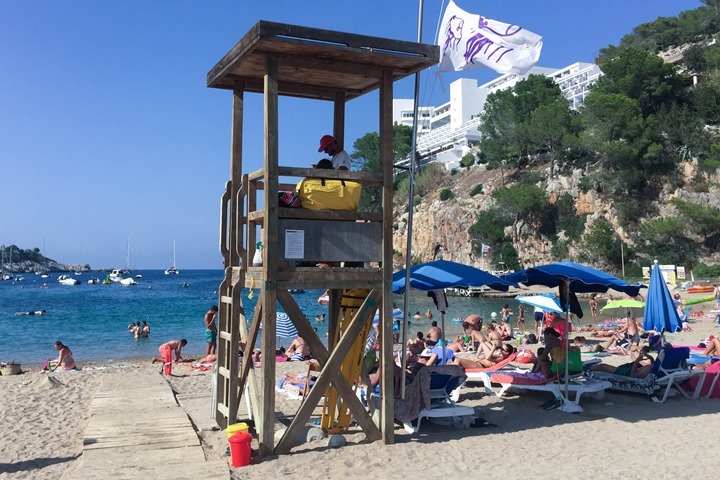 Of course, the main objective of going to Ibiza was to hang out at the beach.  If you were to divide up Ibiza, this half/portion of the island is the quiet side (we stayed in Puerto de San Miguel).  Far from the pumping clubs and gyrating humans so famed on the other half of the island.  That side is basically Vegas of the Mediterranean, except with more skin.  Whereas this side is a world away.

In our case, we split our time between the beach and the hotel room balcony depending on the weather.  We had a little tent of sorts for the little one, which was then placed below an umbrella to keep her out of the sun.  She seemed pretty happy about it. 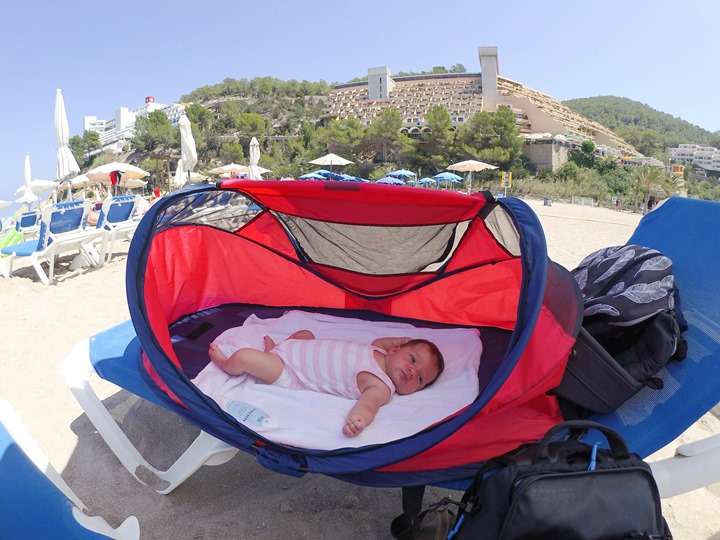 Most of all – we were pretty excited that the beach umbrella & chair rentals were quite reasonable here.  A mere 5EUR each per day.  Not to mention the food nearby was also pretty cheap – but as anyone travelling in Europe knows, the Euro goes much further in Spain than it does in France.  One of the core reasons we selected this spot over others we looked at going to.  We’d definitely go back to this area, and probably even this hotel, which gets much cheaper in 8 days when summer ‘ends’ according to hotel pricing.

Running up to the cliffs

I wrapped up my last evening in Ibiza doing a bit of a run on some of the same trails I ran two days prior.  Except this time I found my way to a lookout/tower/fort I had seen across the way from our hotel room.  Still more trails, and lots of climbing. 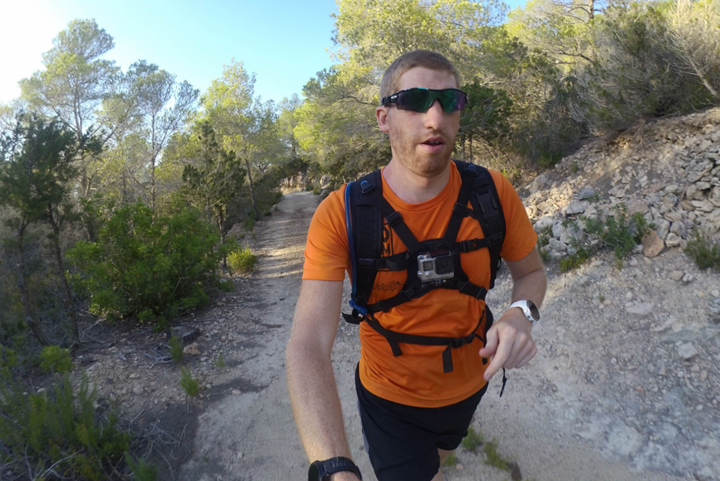 But, upon arrival at the fort and cliffs edge – the views were definitely worth it! 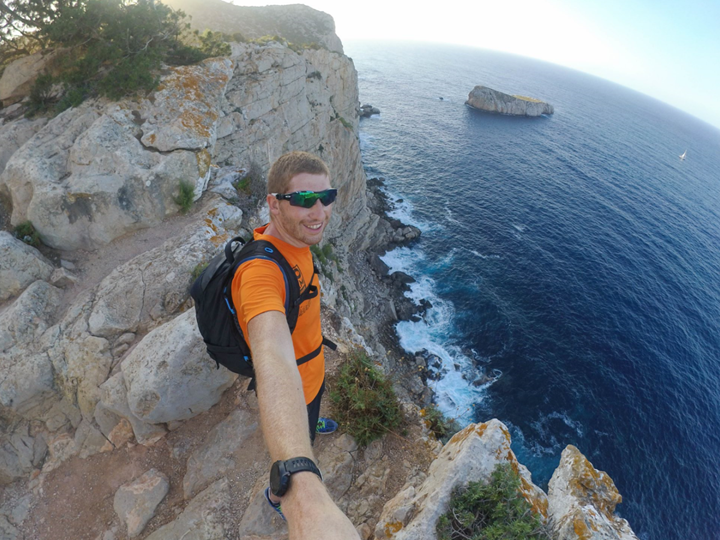 Like my previous run, this was much more focused on taking some product shots for upcoming reviews.  Hence why I had a backpack with me – as I had a DSLR in there, two lenses, two tripods, gimbals, mics, and all sorts of crap weighing me down.  Of course, like always – I probably could have used another 2-3 hours out there.  But alas, dinner and sunset called.  Can’t miss the all-inclusive dinner buffet!

With that – our weekend was complete and we flew out earlier this afternoon (Monday).

The next two weeks are crazy-busy in terms of product announcement posts as we slide into Eurobike next week.  A number of companies are shifting those announcements to just ahead of Eurobike – and not all are specifically bike related either.  So definitely some good stuff for all readers of this blog (swim/bike/run…and more)!