Here’s what we were up to on this beautiful and hot holiday weekend here in the nation’s capital.

After wrapping up a few work items Saturday morning at the Studio (for both The Girl and I) we headed out for a simple late lunch stroll around town with the dog and the bebe.  First it was up the hill behind our home to the Rue Mouffetard area (one of very few hills in Paris- four?). 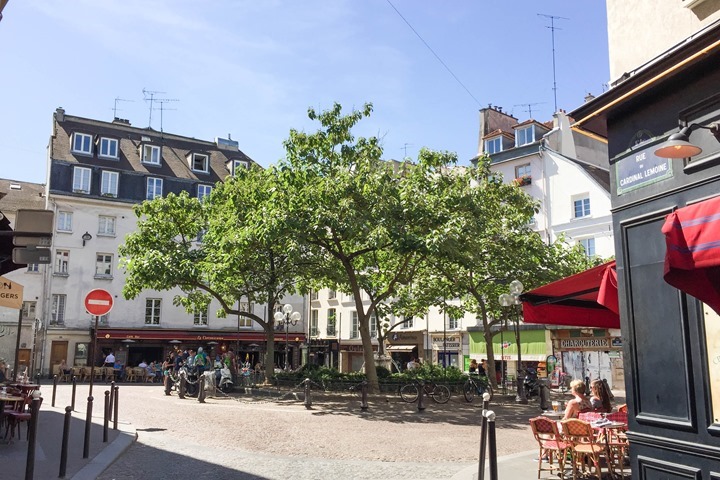 Then down the backside of said hill to a small Mexican place that ended up being quite good. 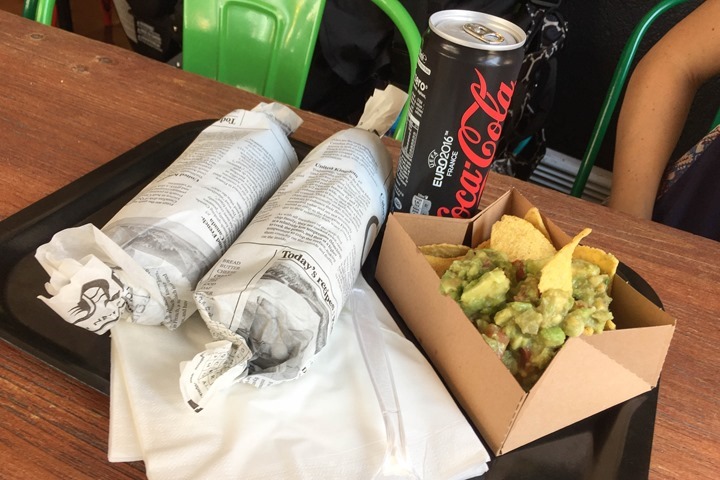 There is also a great market area there as well, although by the time we got there they were starting to wrap-up.  Realistically we wouldn’t go that far for markets, since there’s a much larger market directly behind our house. But still, it’s fun to explore other markets in case there are unique things you find that might make it worthwhile for the occasional trek. 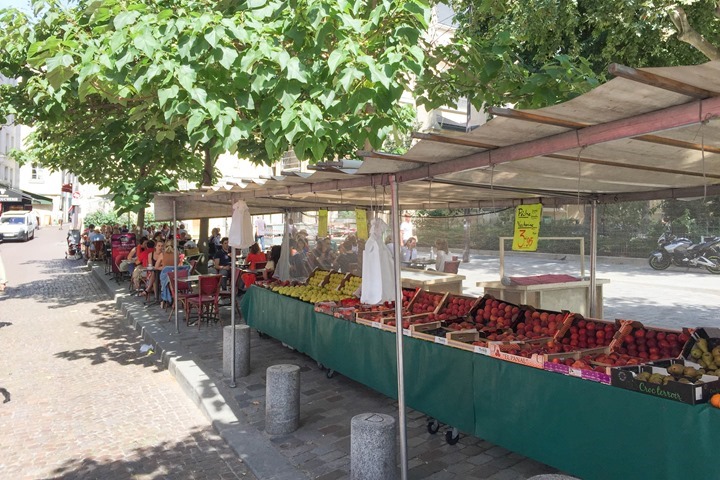 After a few more stops we eventually worked our way back to the Jardin des Plantes for a stroll through the flowers.

I often run around this area, but rarely take the time to stop and smell the flowers.  Literally in this case.  So it was a nice change of pace.

Saturday night our friend Hitchen came over to cook up some dinner.  He was responsible for a Bolognese sauce that was made earlier in the afternoon at his place, and then the girl and I would match that with other items to complete a 3 course meal.

For an appetizer we did some fried zucchini blossoms (here’s the detailed picture-packed post on how we made them). 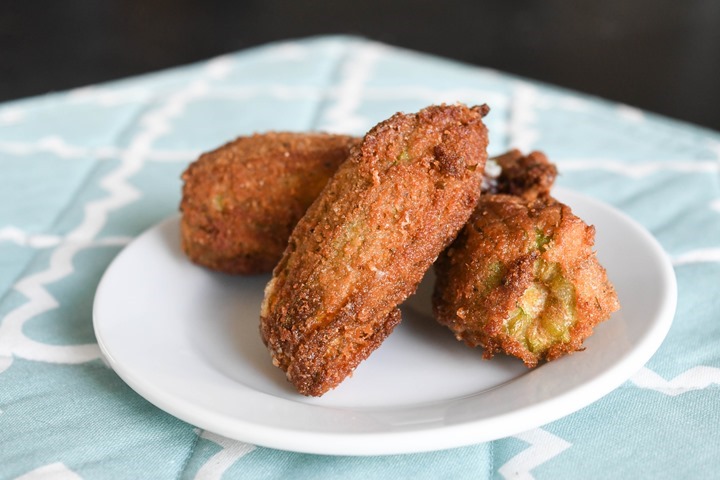 Then it was onto a gazpacho that The Girl whipped up: 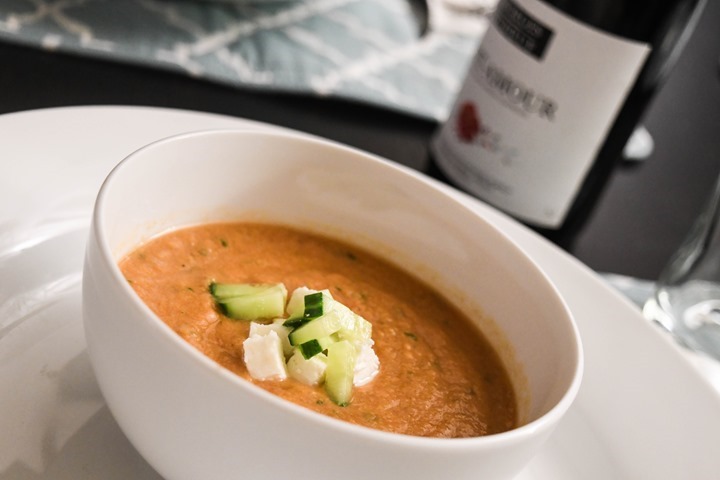 And from there I worked on some simple fresh pasta.  As usual, using my trusty pasta attachment. 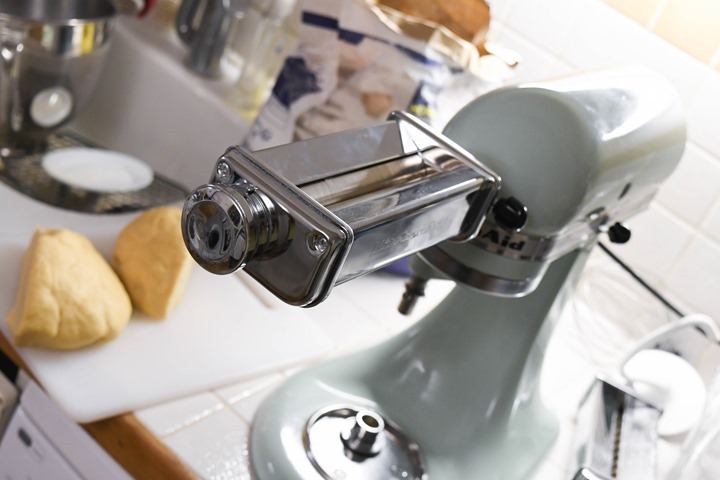 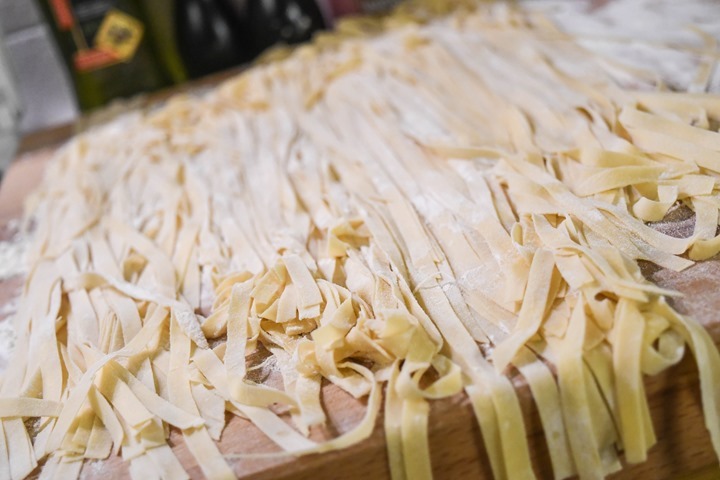 For better or worse, there was no dessert this night.  Not quite sure how that oversight occurred. We’ll have to have a team meeting and ensure it never occurs again.

3) Riding to the chateau and beyond

Sunday morning I met up with Jonathan for an 80-90km ride out in the forest.  While I could have ridden out there, I ended up taking the train about 15 minutes away to meet up with him.  That time of the morning on a Sunday, it was nice and empty. 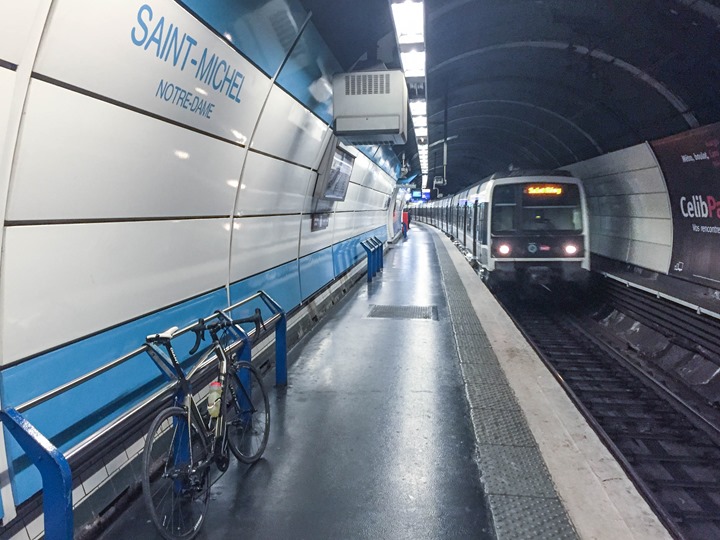 The Chevreuse forest is well known to Parisians as a bit of an escape from the city.  It’s got a nice mix of rolling fields… 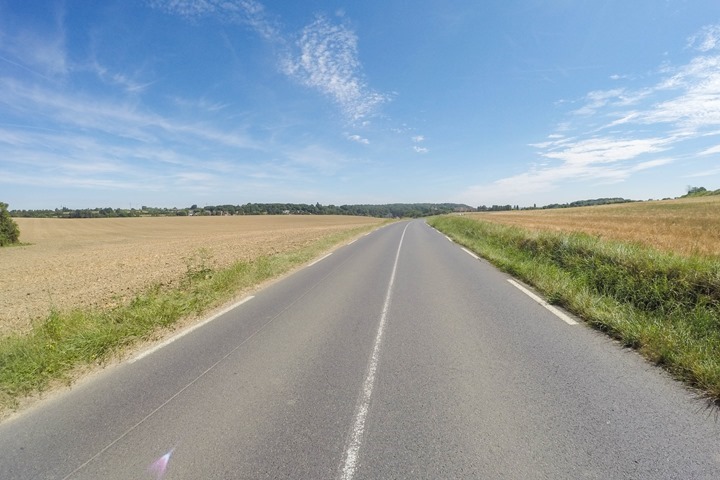 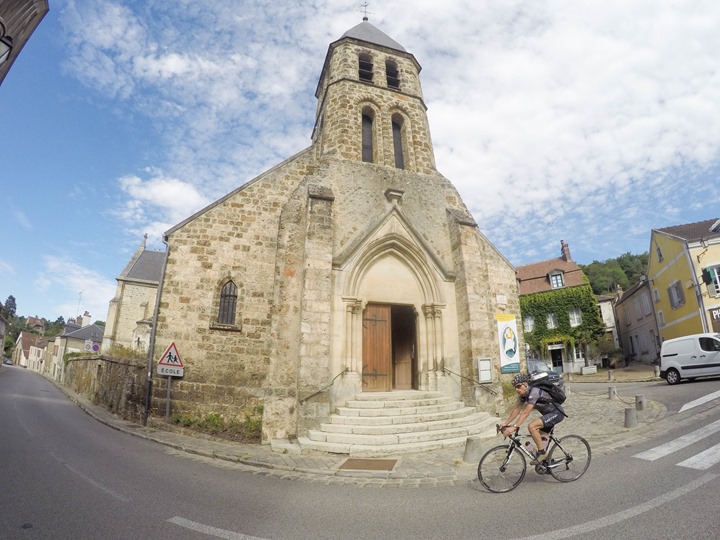 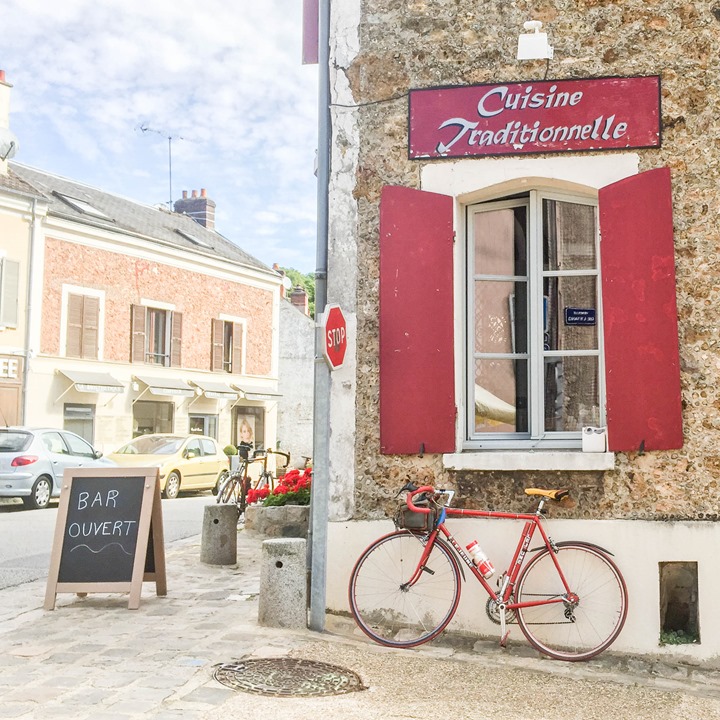 …and even the occasional chateau.  Actually, there are a lot of chateaux out there if you know where to look. 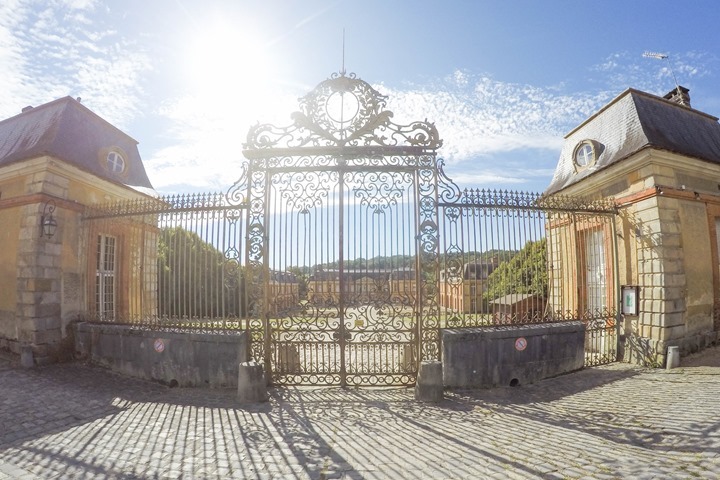 And of course, the forest itself.  Plenty of forest riding with some fun climbs and descents. 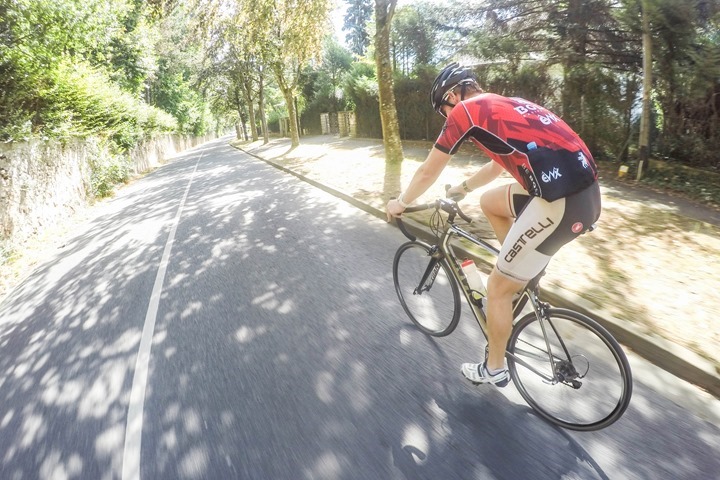 Best of all there are tons of cyclists.  Hundreds upon hundreds of cyclists out on the weekends riding around. 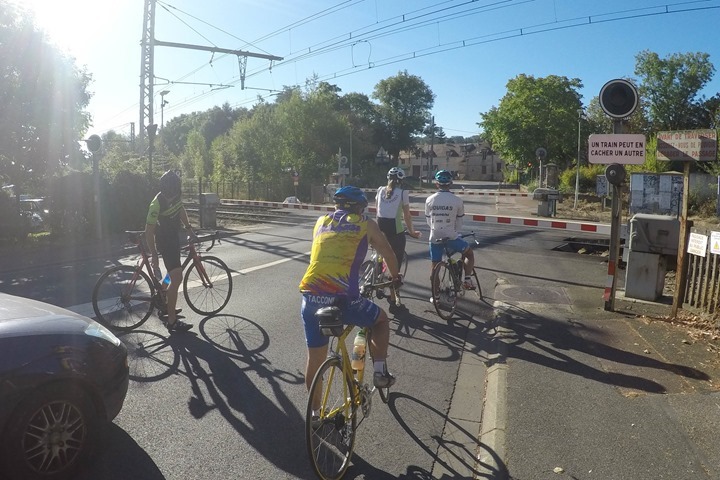 Though, as I noted during the ride to Jonathan, very few French riders were using GPS devices.  Sure, French riders who are readers of this blog will.  But beyond that, only a handful out of those hundreds of people had any sort of GPS device on their handlebars.  Instead, interestingly enough, most had cheap and simple wired bike computers that wouldn’t cost any more than 20-30EUR. 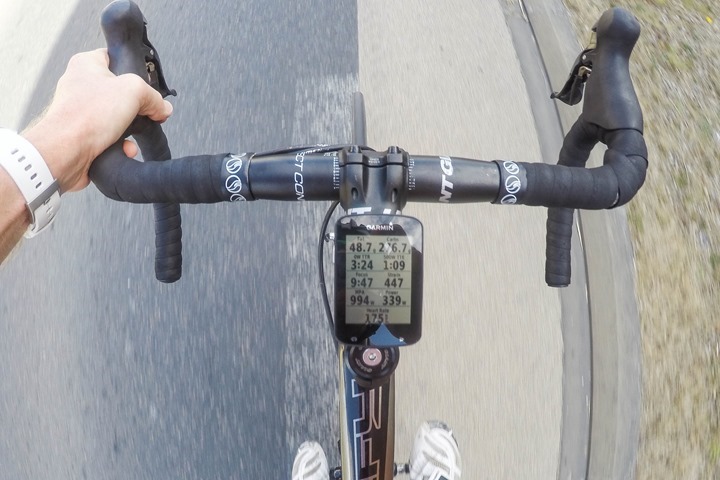 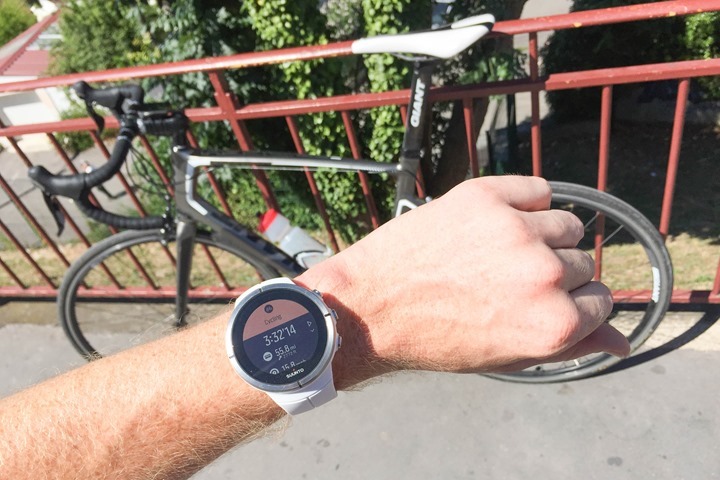 In any case, the ride was great and we made very solid time and kept a strong pace throughout – especially for not being a closed course.  In the above photo, I didn’t stop the watch during our café break.  I don’t do that because it makes lining up multiple device GPS tracks more difficult later on.

4) A quick and sunny zip via Velib

After my ride in the forest, The Girl and I got a bit of a late lunch in another part of town.  After which she was having coffee with a friend.

So I grabbed a Velib for the couple mile jaunt home.  In the below picture you can see the secret signal that a Velib is broken: The backwards seat.  If a Velib needs service, you simply turn the seat around like that (2nd bike). 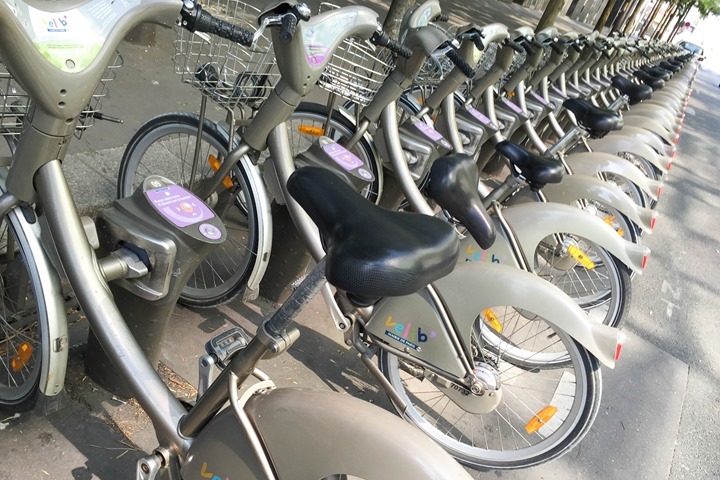 Of course, any frequent Veliber knows how to quickly run through the operational checklist before grabbing a bike to validate for broken parts.

The weather was nice and toasty, and there were plenty of people out sun tanning on the river banks. 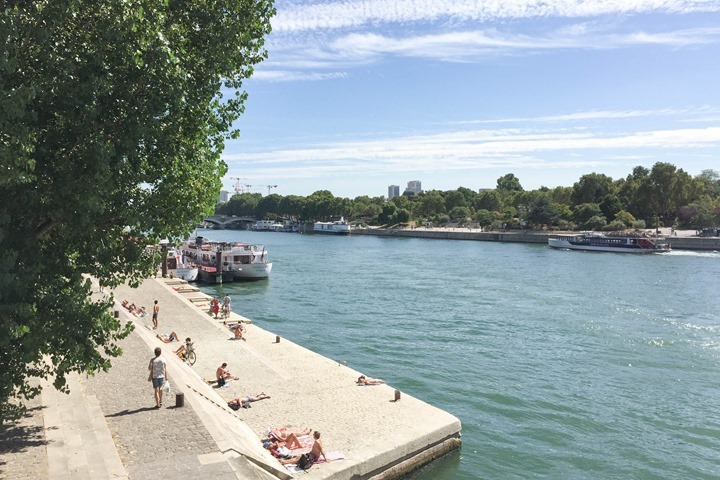 I had crossed over the river to check out a bunch of white tents that were setup in this area, wondering if there was some sort of market going on.  But they were all empty, so not sure if we missed something or if it’s still coming up.

Either way, the stroll in the sun was nice. 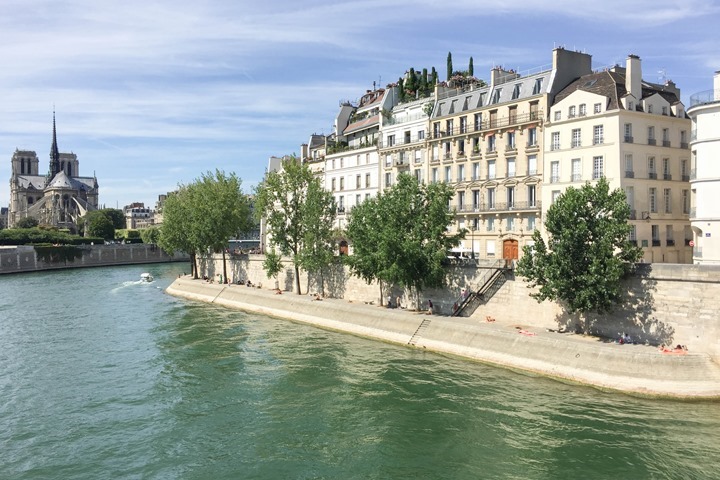 Of course, while most of the people sun tanning are locals, a large portion of the local population is out of town right now. Many (probably the majority) of non-chain restaurants are closed for another few weeks, as are many smaller shops.  Bigger stores like Starbucks and The Gap are of course still open.  But most of our favorite places to eat are all closed.  Thus, we’re basically just eating ice cream every day (they stay open).

Last on the list of things was the annual procession from Notre Dame around our neighborhood celebrating Assumption Day.  Typically this occurs on Assumption Day itself (Monday), but this year there was also a procession on Sunday evening.  I don’t believe that was the case in years past, as I’ve only ever noticed one procession each year (such as this one).

In any case, it’s more just something for us to watch scroll by.  However, the neighborhood was heavily guarded by police this year (as compared to almost none in years past).  They closed the river down, as well as the bridges to traffic and parks about 3 hours early to sweep them clean.  Then every 50-75m were well armed police guarding. 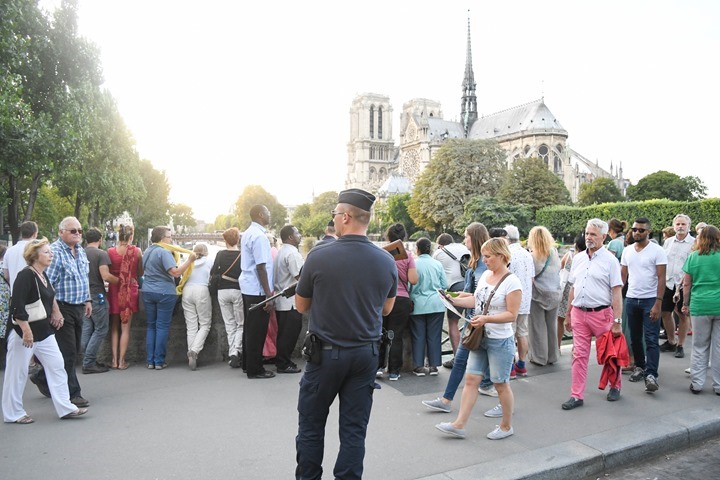 In any case, this year the procession went along the river’s edge itself.  Starting from the church, and then upstream along the Seine. 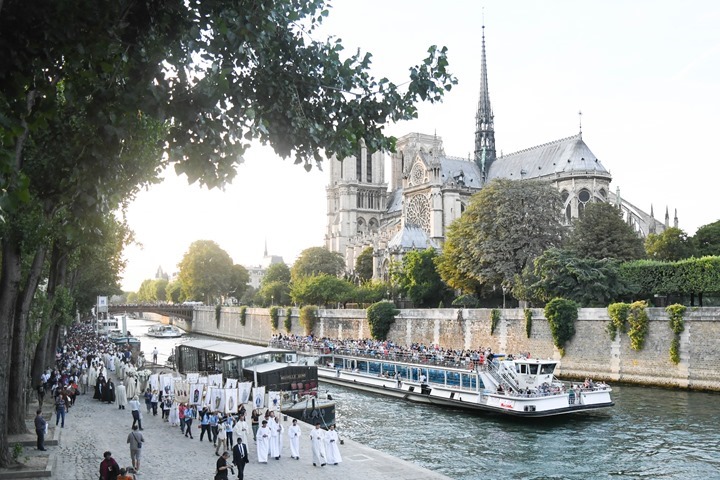 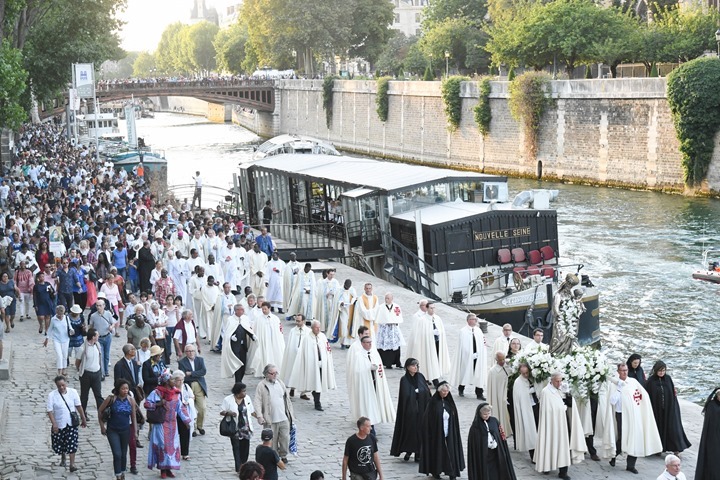 Plenty of onlookers from above on the bridges. 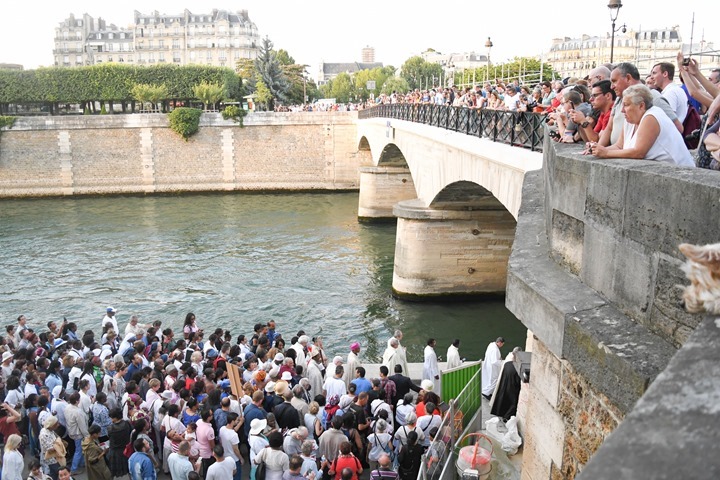 The only challenge with this river-route is that it narrows under each bridge, resulting in a bit of a traffic jam. 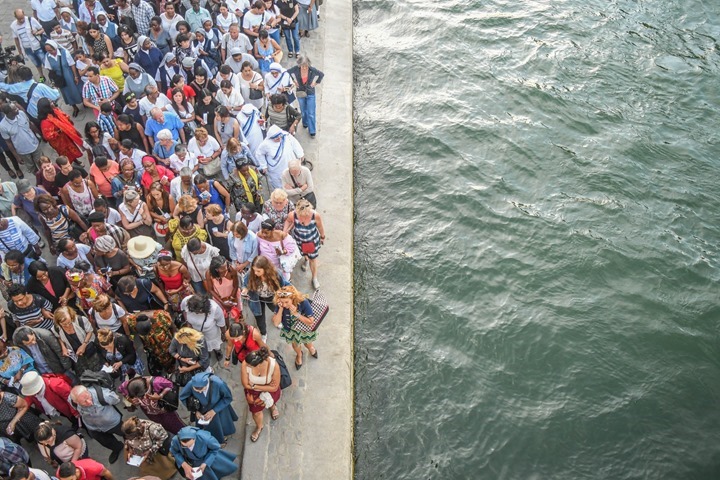 From my understanding, they’ll be doing another procession this evening (Monday) – which is also a public holiday here in France.

With that – time to get back to enjoying that public holiday.  Though aside from sleeping in a little bit longer this morning, The Girl and I just treat it as any other day.  Too much stuff to do!