Interbike 2011: Creative ways to get your booth noticed

Like all trade shows and conferences, half the battle is getting someone to just stop in your booth.  Once you’ve succeeded on that front, you can begin to engage (read: sucker) that individual on what your product is.

At Interbike I saw many techniques for attempting to get people into your booth, so I figured I’d highlight a few of them in a fun photo filled post.  I found  that in general the techniques fell into a few over-archiving umbrella categories – which I’ll highlight below.

Without question, the easiest way to gather a crowd at your booth is to get someone famous in there.  And there was no shortage of that at Interbike.

For example, Garmin had a slew of different Team Garmin riders, including Dave Zabriskie, Ryder Hesjedal and Danny Summerhill. This sock company brought in US Olympian Cyclist Nelson Vails: 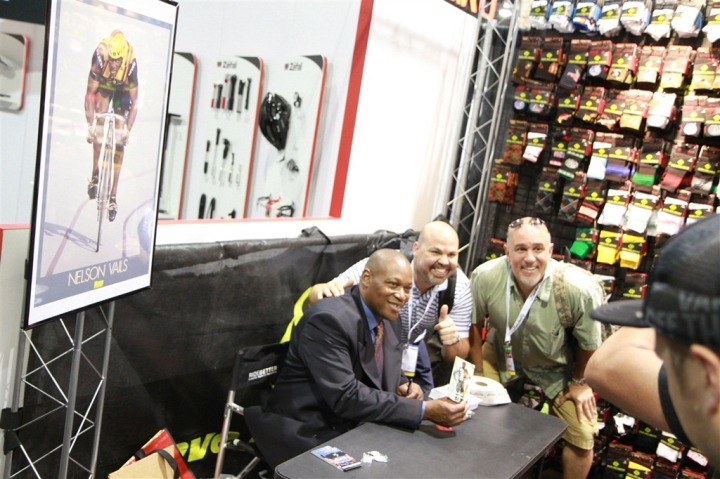 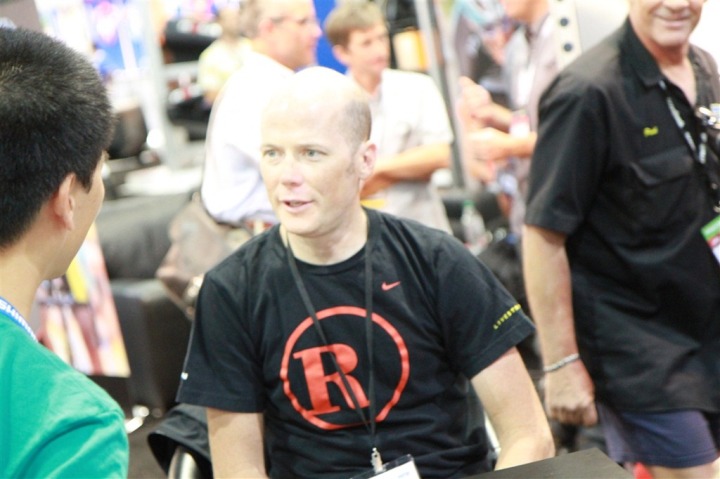 Note that you can elevate said celebrities status if he starts signing attractive women’s clothing.  For some reason that causes more men to line up, as if they think that Chris Horner will sign their chests too. 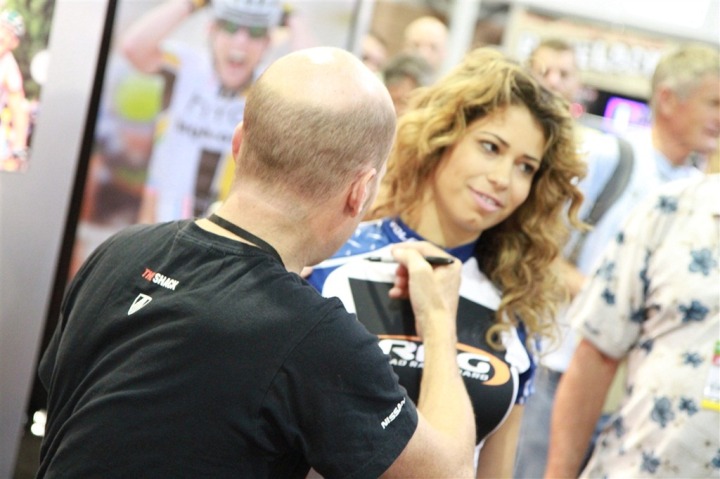 And then when straight cycling celebs aren’t available – you can cross-over into TV celebrities, preferably ones that have an outdoorsey feel to them – like Phil Koeghan of the Amazing Race. Though he was actually there for his No Opportunity Wasted thingamajig. 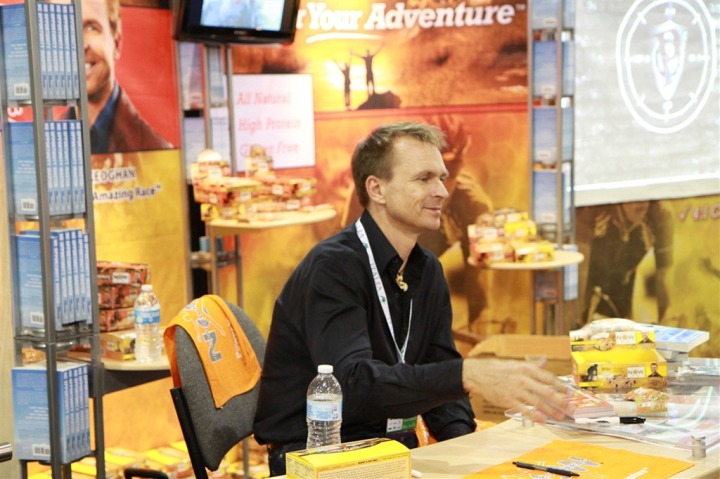 Of course, don’t forget that you can always go with the sleeper-cell-celebrity.  For example, Barry Bonds was somewhat aimlessly wandering around different booths.  Sometimes allowing photos, sometimes not.  Sometimes appearing to be promoting a company, and sometimes not.  But, like they generally say: All press is good press.

There was a plethora of free beer abound.  Much of it planned, but some of it unplanned.  As the Wahoo guys said – ‘When life throws you a lemon of a booth location, buy beer for everyone’: Remember the golden rule of beer though: It should be free.  If you’re going to drive a giant terrorist looking truck into the convention center – don’t be charging $2 a beer when the booth across the hall is giving it away for free. 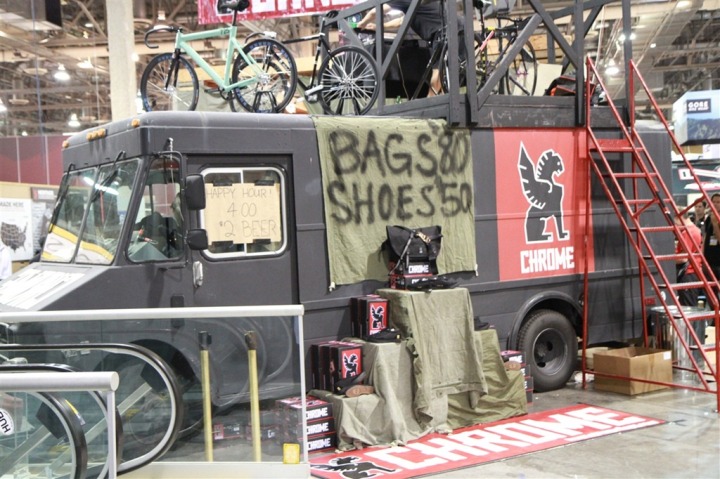 Meanwhile, the Cytomax folks understood that sustaining on beer alone during a trade show probably wasn’t a good long term solution.  So they apparently went to a nearby 7-11 and stole the drink machines, filled them up with Cytomax, and then found a pile of Dixie cups. This plan was thwarted though when smart cyclists stopped by with free and empty water bottles from a few booths down. 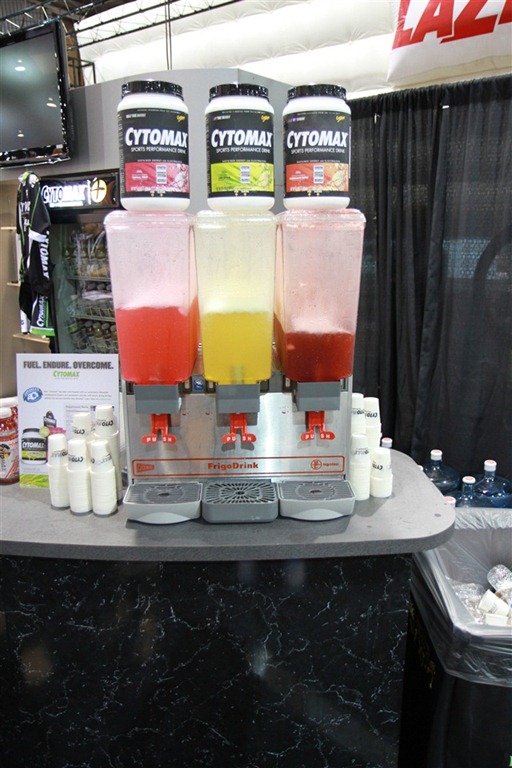 Ok, that’s it! I’m refusing to do another race until my aide station looks exactly like the below setup – color coordination and all. Dixie cups were soooo 2010. 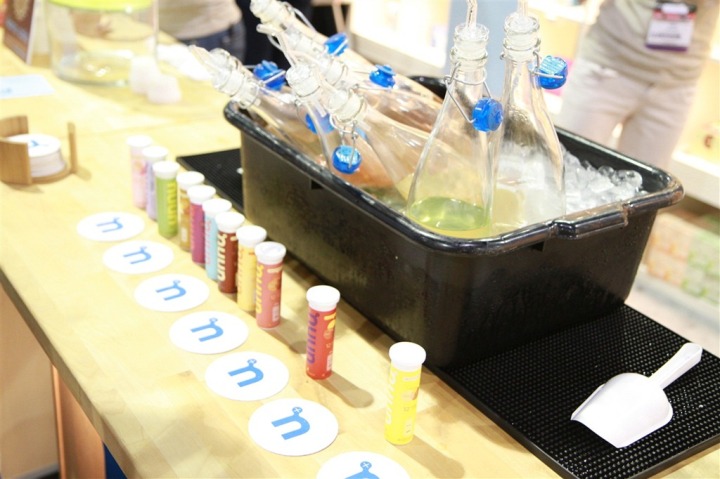 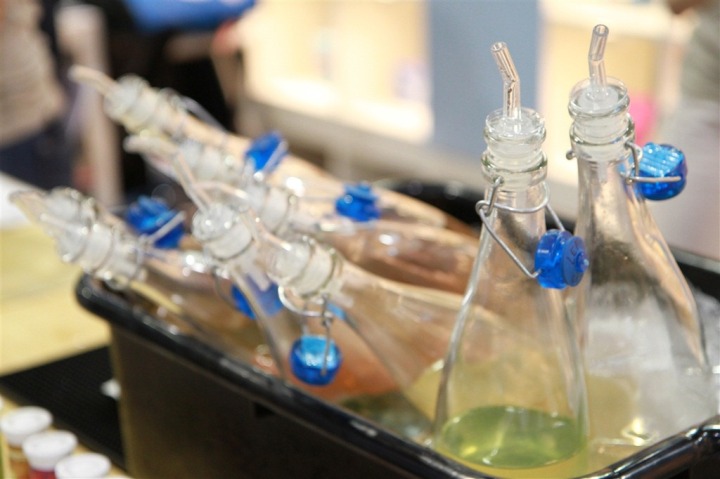 If drinks aren’t working out, you can put a bunch of toothpicks in gummy candies on a tray that looks like one of those mouse-trap sticky pads. Oh wait? Those weren’t gummy candies? Crap. 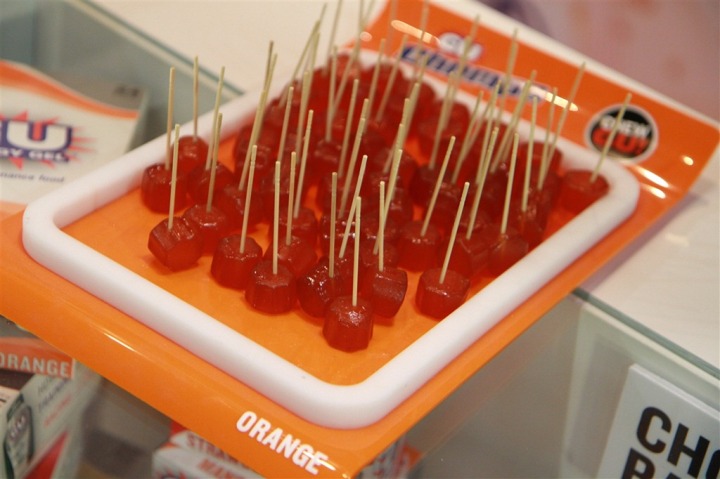 Given that the tradeshow is focusing on competitive people (after all, this isn’t a Star Trek convention) – it stands to reason that you can probably sucker some folks into competing for…well…nothing.

First you’ve got Quarq and their Torque Arm Wrestling machine (p.s. Jim – I would love to have you post here on how someone could make one of these themselves – DIY style). 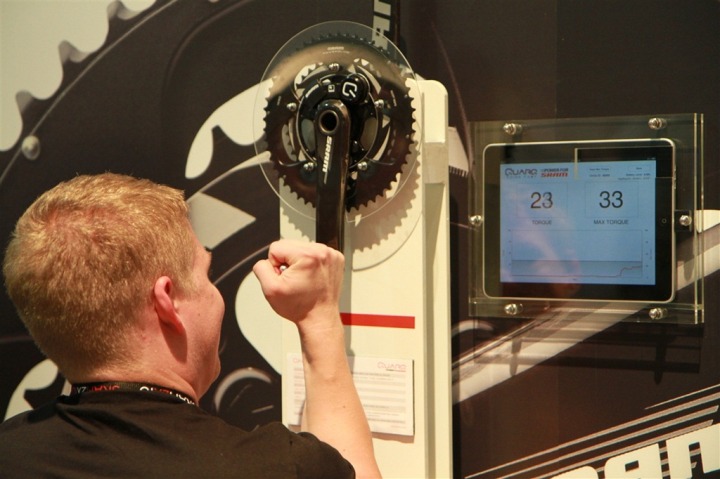 Then we’ve got the LeMond booth with their max power test.  If you zoom in on the below photo (just click it), you can see this guy’s max power at about 1168w. 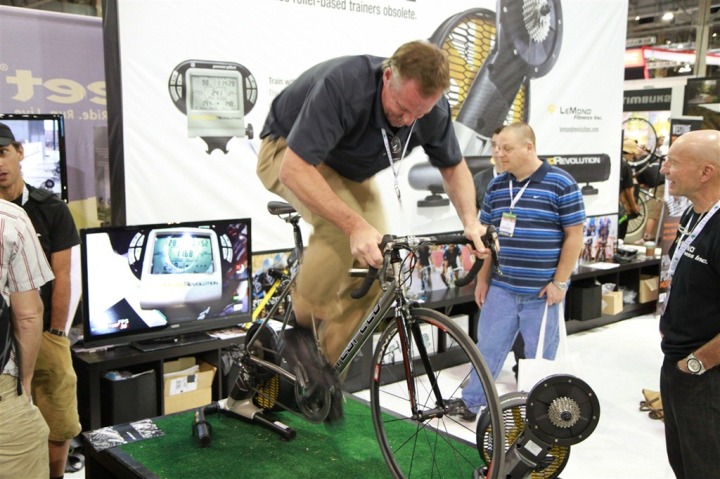 By comparison though, he was barely at the half-way marker of the max power high watermark.  See below chart for the highest output I saw of 2,161w (sorry, not my fault they selected a dying pink marker for the top wattage). 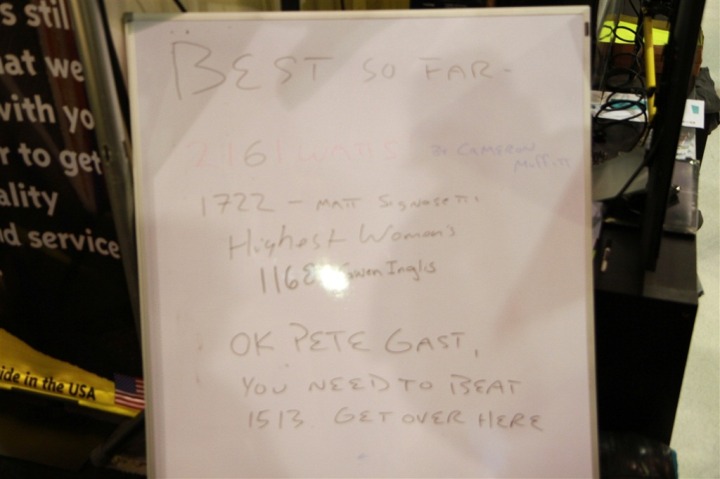 And then you have things that just don’t really fit into any category.

Like, the following.  Note the expression on the guys face…pure confusion. I wish I could give you an explanation for this, but honestly I lack one. 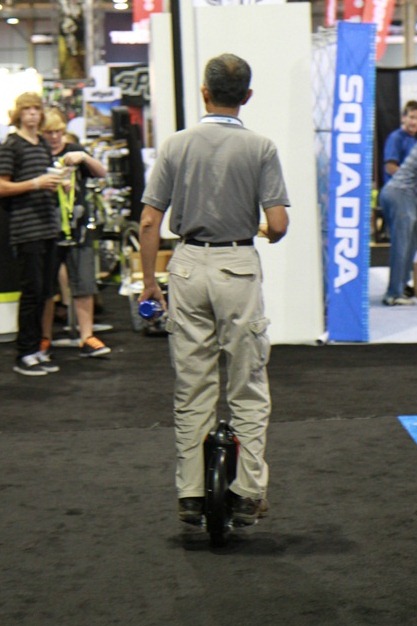 Or this.  What? Looks normal to you? Next picture then… 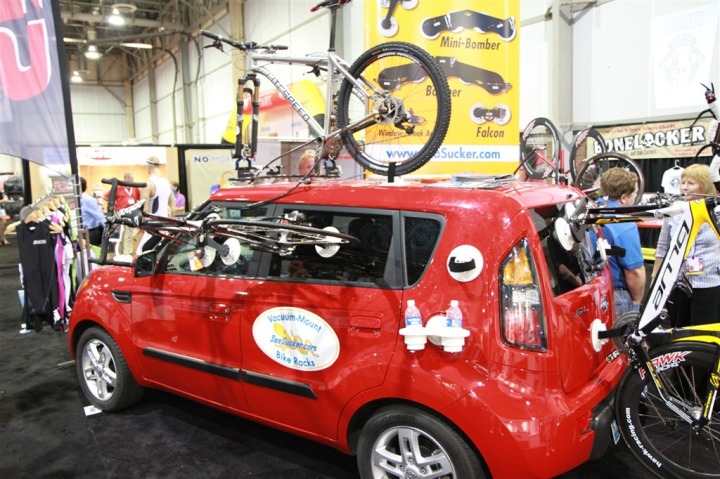 That’s what I thought.  That can’t be street legal! 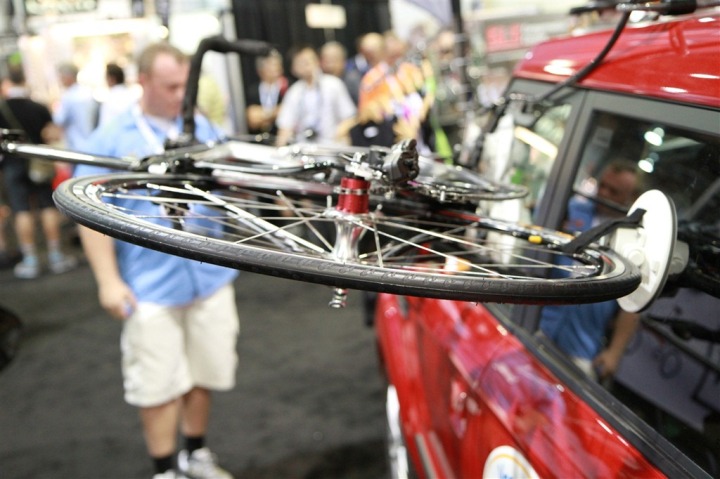 With the Kinetic booth, I wasn’t quite sure if this women’s cycling team just needed a place to get in a trainer ride – or if they were part of the booth.  Either way, I’ll give them credit on being successful in getting me to at least stop at the booth.  And I’m reasonably certain I saw Barry Bonds trying to pick one of them up later on (Ha! Just found a picture to it!). 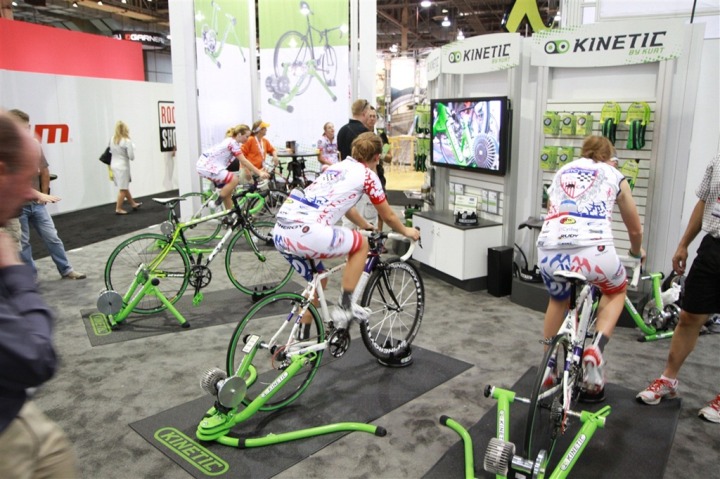 I wholly admit I don’t get the “Italian Cycling Factor”.  It’s clearly a roadie thing.  Or maybe it’s an Italian thing.  Either way, it’s an I don’t get it thing (but I do get pasta with meatballs, and fresh buffalo mozzarella…mmm…)

The majority of the Interbike bike booths have exhibitor folks interacting and attempting to get attendee folks into their booth to talk about their products. But not the Italians.

Nope, they just stood out in the hallway – hour after hour, day after day.  Not really engaging anyone who passed by. 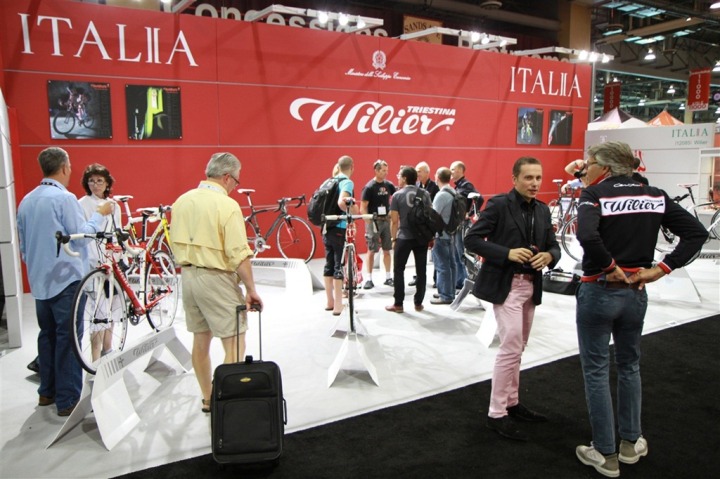 Hope your week is going well, thanks for reading!