In lieu of a current trip report (since I’m in the middle of my honeymoon), I thought it would be fun to go back a few years ago to a trip report I wrote for friends and family about a flight I took on the Concorde. 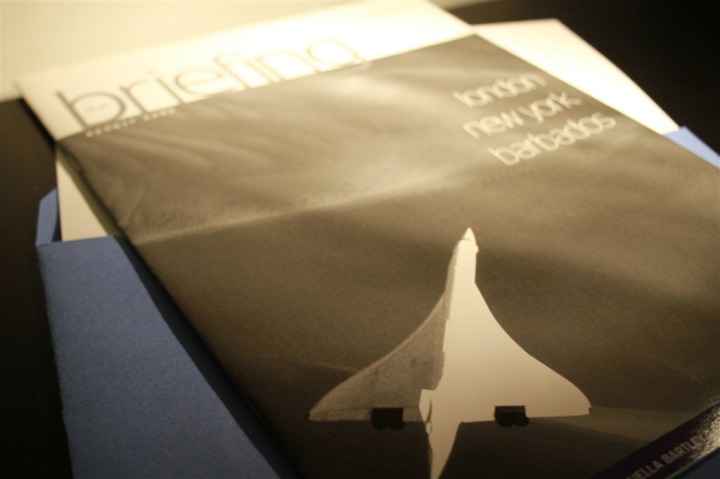 Now, the backstory of getting tickets on Concorde (no, you don’t put ‘the’ in front of it if being proper…I know, strange) is a bit convoluted.  Being one that travels a fair bit I’m pretty in tune with frequent flyer related stuffs.  Back at the time a deal came along where if you bought magazine subscriptions for relatively cheap you got a slew of Qantas frequent flyer miles.  Cost-wise it was incredibly cheap.  These points could then be redeemed not only on the Australian carrier, but also on any Oneworld member – which includes American Airlines and British Airways, amongst others.  British Airways of course being one of only two operators of the Concorde (along with Air France at the time).  Once you did the math it ended up being about $1,200 for the round trip ticket, which is about 1/20th the cost of a normal ticket, which normally ran up to $20,000 round trip on the Concorde.

At the time I loaded up on a slew of Qantas points, figuring it was a good deal for trips I might want to take in the future.  Just like buying credits for flights in the future.  And since I didn’t need hundreds of magazine subscriptions to Children’s Magazine, they were all donated to charity.

I ended up taking my dad along for a weekend in Prague (we had never been), and the once in a lifetime opportunity to fly faster than the speed of sound.  We flew outbound on British Airways from Denver on a regular Boeing 777, and then the below is the story of our return on the Concorde from London Heathrow to JFK in NYC.  This would only be about 2 months before the last flight occurred, when they ceased Concorde operations in October

After arriving from Prague, we wandered down to the gate area, and tried to look around for a place to take a photo of the plane from the normal gate areas, but didn’t seem to have much luck finding one so we decided to go “experience” the lounge.  The person at the front door noticed our Concorde boarding passes, and happily welcomed us into the room.  At the main desk they took a portion of our paper ticket (it as actually a legit paper ticket then), and asked us if we wanted some of the special Concorde baggage tags.  Not wanting to miss an opportunity to collect as many items as possible from this experience, we happily accepted the baggage tags. 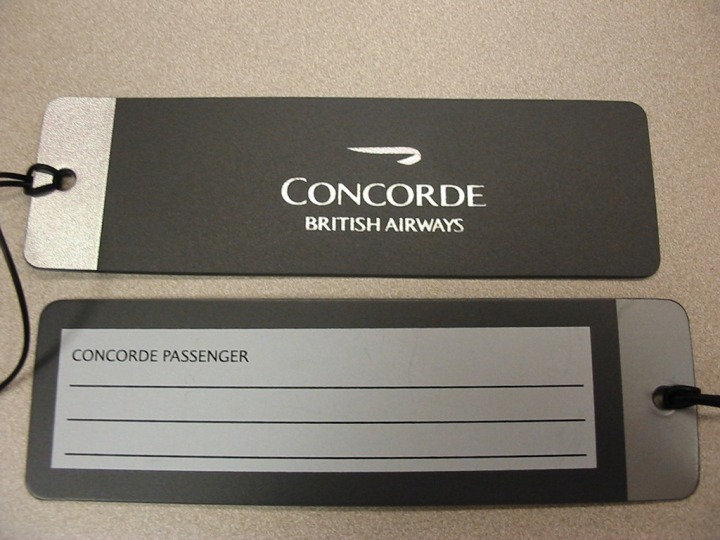 The British Airways Concorde lounge is known for their spa, which is actually run by one of those fancy spa places.   I decided to skip the whole rub-a-dub-dub spa experience though as I’m not exactly the spa type of person.  But we did enjoy the rest of the lounge and even got to meet the pilot for our flight, which was pretty cool.

At about 9:55 the captain came over the loudspeaker within the room noting the weather was great in New York and that we’d start boarding shortly at the top of the hour. Also, prior to boarding they asked if anybody would like to check their coats or other small bags at the Concorde door, where they stuck this pretty little tag on it with the reminder to us that: “Mr. Maker, if you get a little cold, I’d be happy to retrieve the jacket for you.”.  Which got me thinking – with upwards of potentially 100 suit jackets, that’s a rather big closet!

At 10:00AM they began boarding, first with the rear cabin, then following with the rest of the cabin.  We walked down a flight a stairs where they a large rack of a variety of papers to choose from noting that there were no newspapers stocked on board.  The lounge is actually directly connected to the jet bridges for the Concorde, so while in the lounge you have a great view of the airplane below you, especially when they tow it in prior to the flight: 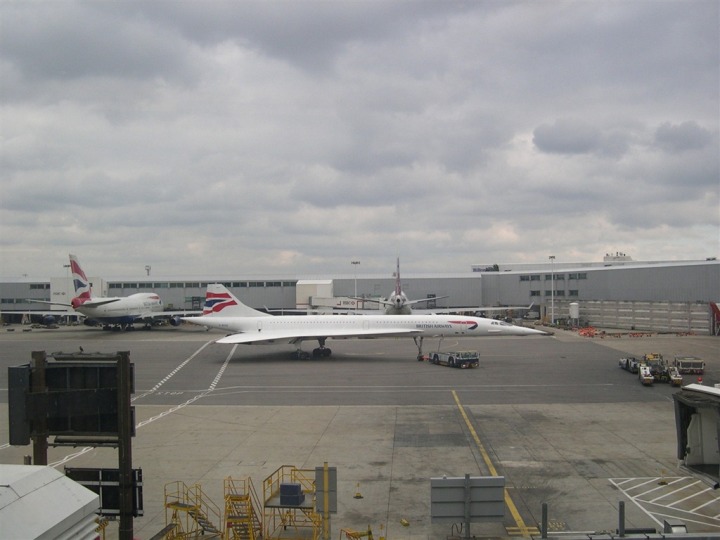 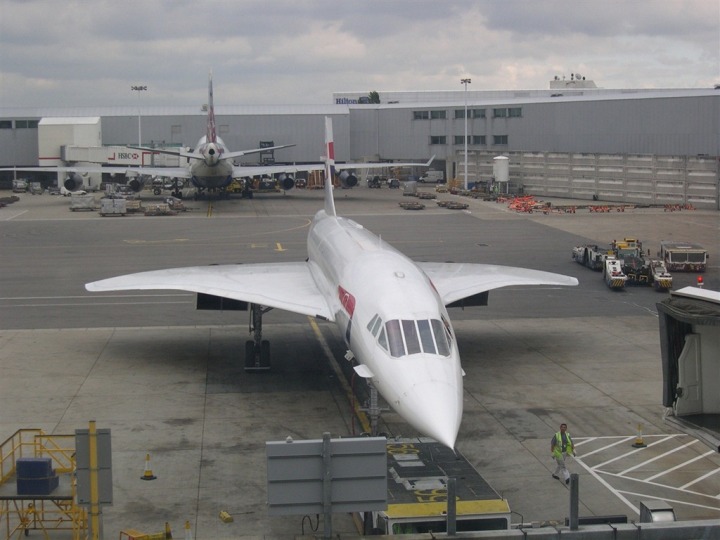 As we stepped onto the plane we had to watch out for the abnormally low door ceiling, which would have just about decapitated me…a less than ideal way to start the trip.  We successfully found our way back to our seats though, and stuck one little bag in the small overhead compartments before placing our laptop bags below the seats in front of us.

Despite what I expected, Concorde’s seats are not exactly the epicenter of luxury.  In fact, they’re fairly tight.  If you’ve flown a regional jet in the US you’ll find these seats oddly similar…just in leather instead.  And with snazzy pillow. 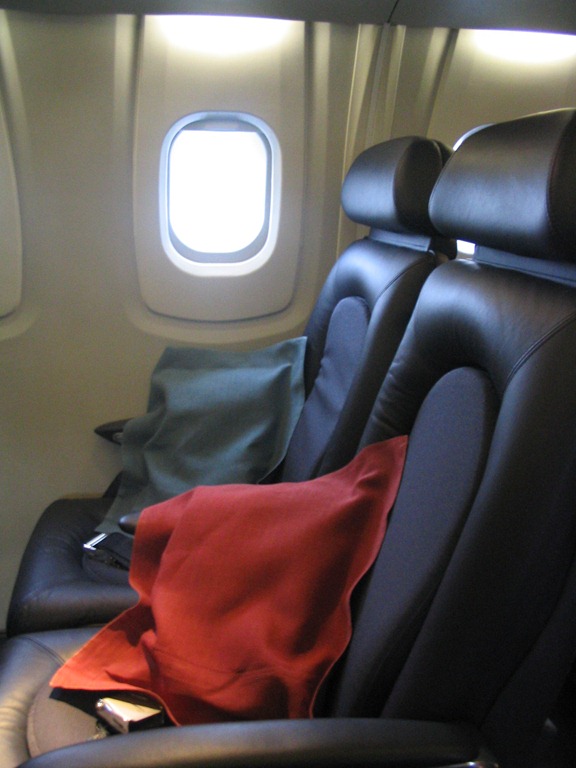 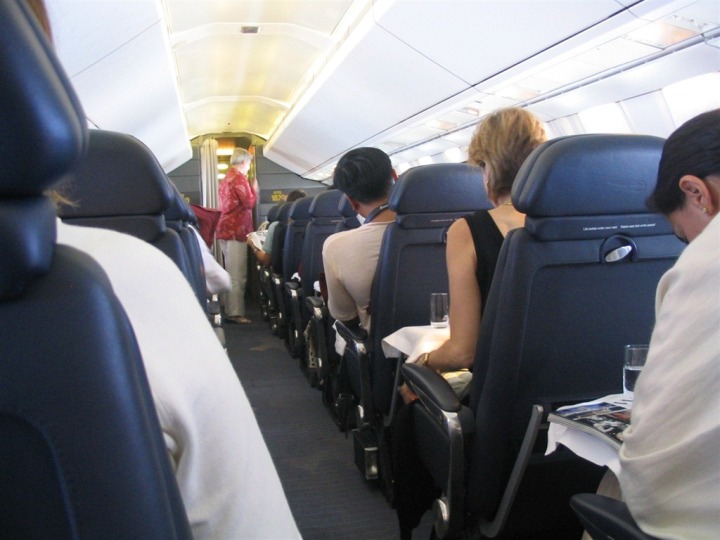 You’ll also notice the rather small windows compared to a typical airliner.  This is done to increase the strength of the aircraft’s frame.

The captain came on and told us that the taxi would be about 10-15 minutes long, as we had to go to the other side of the airport.  He said he would brief us on the flight while we were taxing.

Perhaps one of the coolest portions of the trip was the taxi itself.  Never in all my flights have I seen every single person stop whatever they were doing and watch an airplane roll by.  Baggage handlers loading a plane nearby stopped the baggage lift and just turned Concorde go by.  Cars, trucks and ground personnel all stopped, turned and watched.  As we taxied out towards the runway we went past two lawnmowers, who both got out of their trucks, and sat on them to watch the takeoff.  Then passing some construction crews who did the same, truly amazing.

The first officer informed us he would be flying today to JFK today, and that the takeoff is a bit more unique on this plane than others.  He explained that at slightly under 200MPH he would rotate the nose lifting the aircraft towards the sky.  At 65 seconds after initial full power-on they would then pull the throttle back significantly in an effort to give dampen the thunderous noise, in an attempt to appease the airport neighbors.  Following which we would continue our slow climb out towards the Atlantic.

As we started the takeoff roll I continued to notice off-airport people walking around business areas just stop to stand and watch the plane race down the runway.  People even lined small portions of the fences to watch as we took towards the sky.  At what I assume was slightly under 200 MPH, we rolled back, not very steep, just barely up.  As we got to around 800 feet above the ground we began a steep right turn in a large circle.   As we did this the plane was effectively placed on edge, during which you could feel the incredible amount of thrust behind us pulling us around.  Just imagine being on the end of a yo-yo being spun horizontally in a circle.

Twenty-five miles outside of London the First Officer explained to use that in 30 miles we will hit supersonic speed and to expect possibly two slight pushes, then 30 seconds later we should be at supersonic speed.  The two slight pushes were the engines being “re-heated”, essentially a form of afterburners, at least from my understanding of his brief comments about it.  While I barely felt the pushes you could feel some acceleration as we cruised upwards towards 51,000 feet and 2.0 Mach.  Eventually, we’d make it to 58,000 feet.

But before that, at around 45,000 feet or so, food service started.  For fun, here’s the full menu – transcribed!

To start your day our “Specialty Smoothie”, a chilled blend of fresh fruits and juices.

Grilled fillets of veal, marsala butter with a confit of cepes

Coffee, decaffeinated coffee, a selection of tea with chocolates

As an alternative to the full menu, we are pleased to offer a selection of freshly made sandwiches including prawn and Marie Rose sauce, Parma Ham, Mozzarella and tomato and Brie

And because I’m not even going to dare and try and copy all the wines, etc… I have simply taken photos of each page, and placed them here:

Here’s the food I selected, some of the pictures came out good…while others not so much: 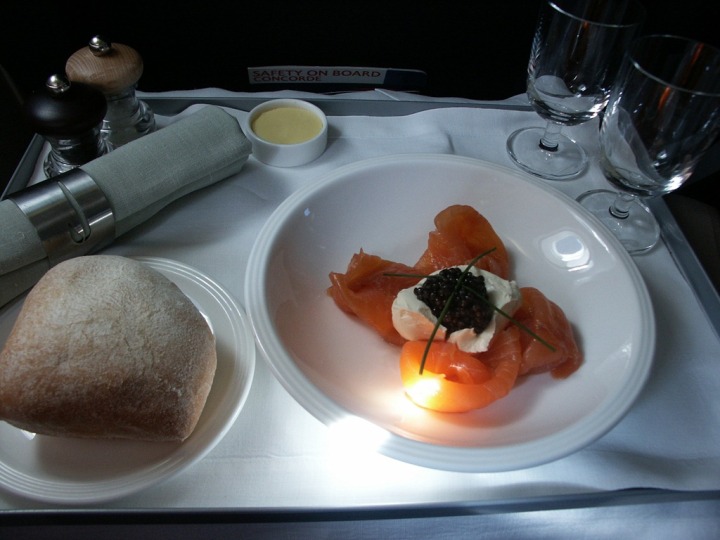 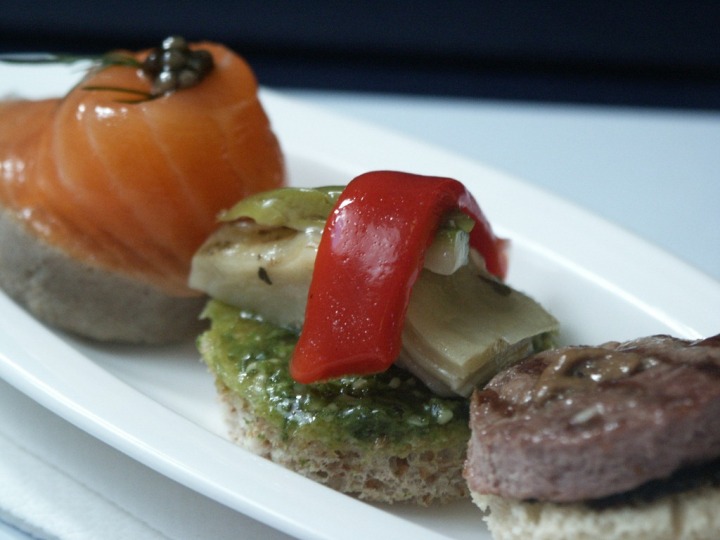 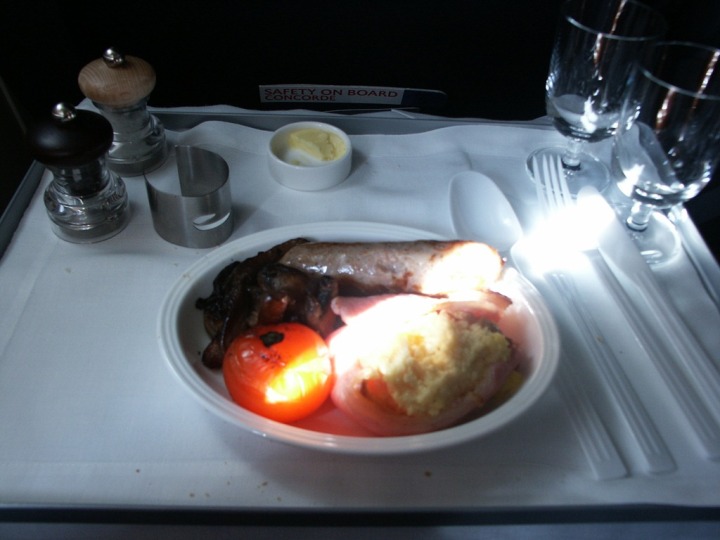 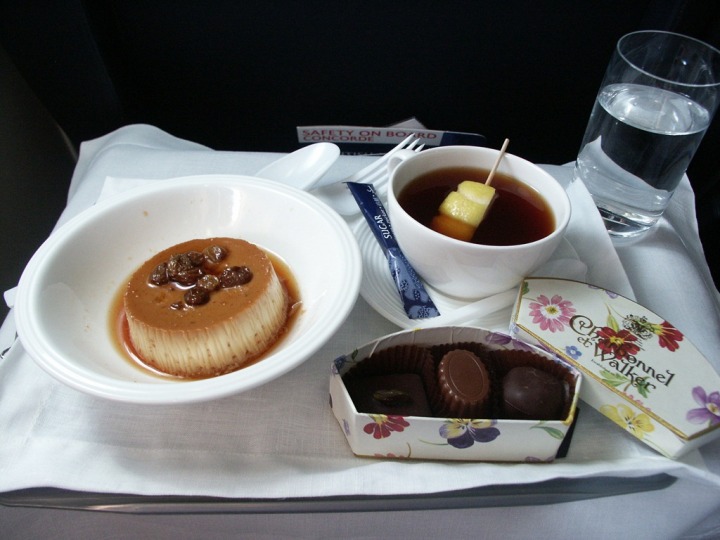 The canapés were awesome, and the smoked salmon and caviar was great.  However, I thought the main course was just so-so and tasted pretty much like any other bit of airplane food.  I think it’s an egg thing, eggs never really seem to work out well on planes.  But the desert and chocolates were very good!

For most, the climax of Concorde is being able to see the curvature of the earth – and today was no disappointment.  From here you’d see the blackness of space mixing with the stark white of the clouds below.  Remember, this was a daytime flight – so the darkness is not it getting dark out, but rather just the darkness of space. Rather than try and describe it, I’ll simply let photos do the talking: 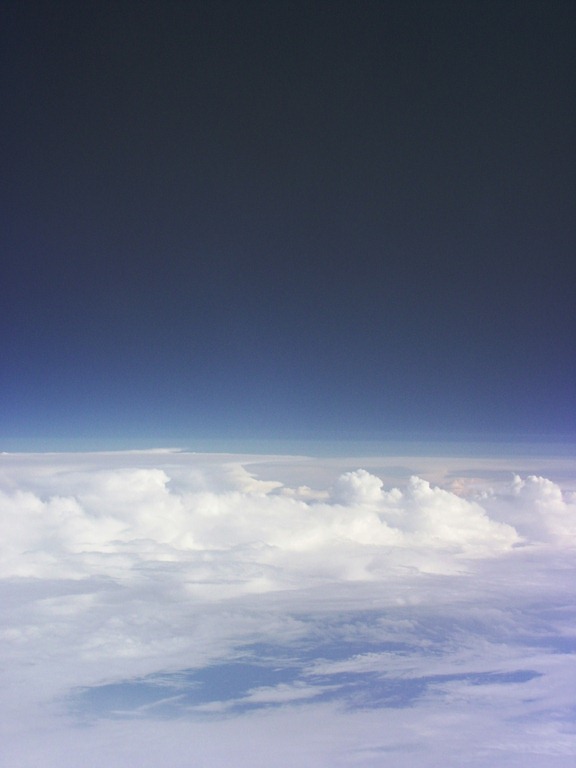 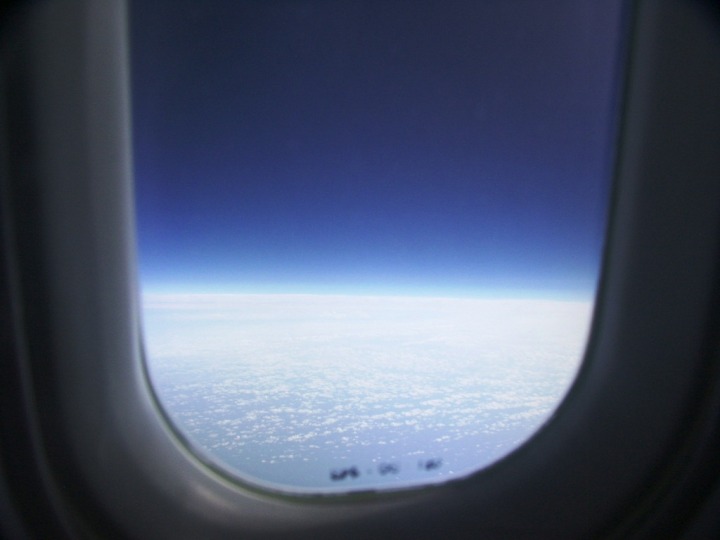 This is of course really only visible when you get higher up, and during our trip we’d peak at 58,000 feet.  Though we spent most of the time at 55,000-56,000 feet.  One of my favorite ‘features’ of Concorde is the display screens at the front of the cabin that display speed and altitude.  These are most popular midflight when folks get pictures taken in front of them.  There’s just something so cool about seeing 1,320MPH and Mach 2.00. 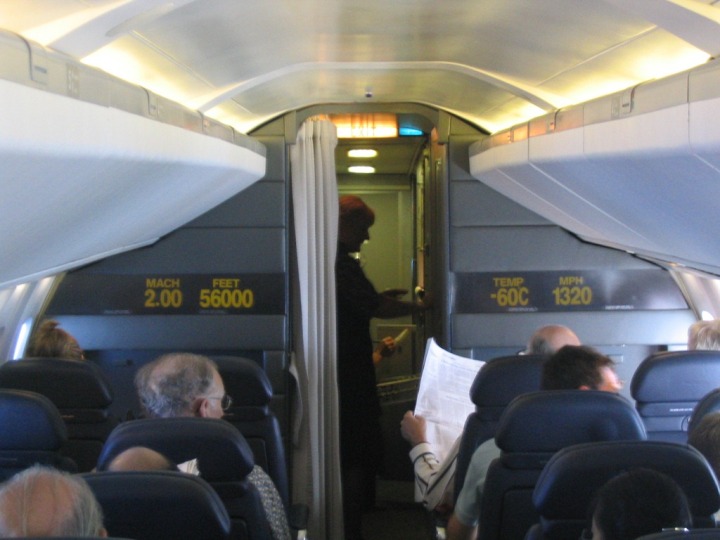 Eventually the Captain informed us we about to begin our descent.  The de-acceleration was surprisingly cool.  You somewhat lurched forwards just like when you hit the brakes on your car quickly.  Somewhere around that time they started doing the duty free service. From the Concorde branded items they had a clock, keychain, cufflinks, little silver miniature of the Concorde and a few other branded items.  Of course, they also had many of the other standard duty free stuff.  There wasn’t a ton of stuff in there that interested me, but I did end up picking up a pair of cufflinks – simply because I figured someday they might be cool. 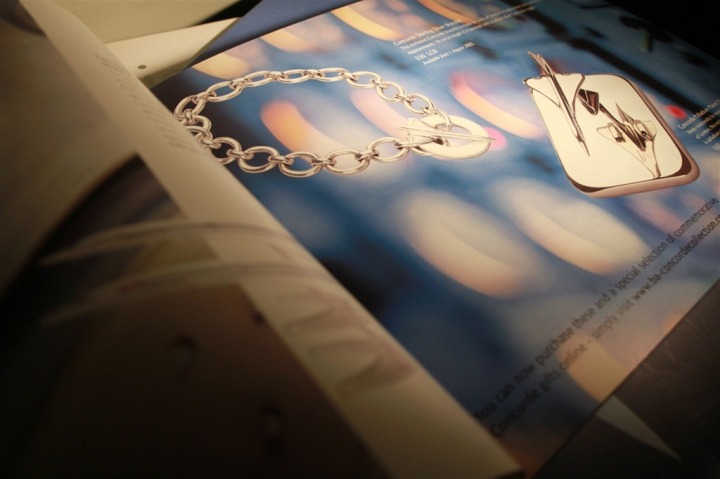 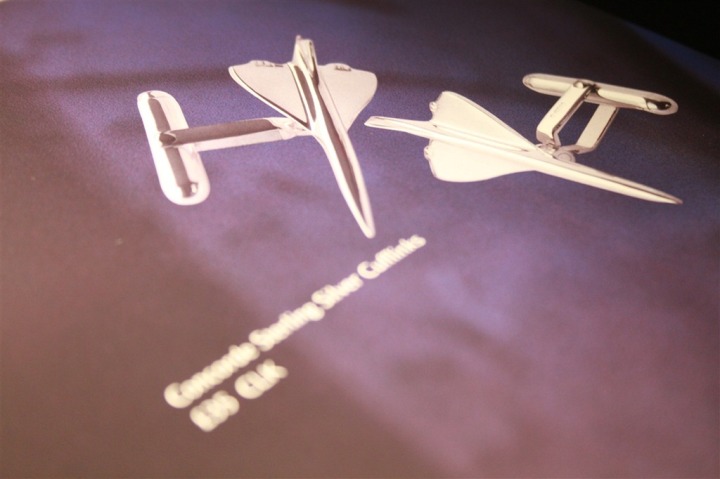 The landing itself was fairly fast – quite a bit faster than your normal aircraft arrival.  As well as being a bit bumpier, but that’s somewhat expected seeing how fast we were going.  Following arrival at the gate we were given our signed certificates from the Captain – as well as a an extra one. 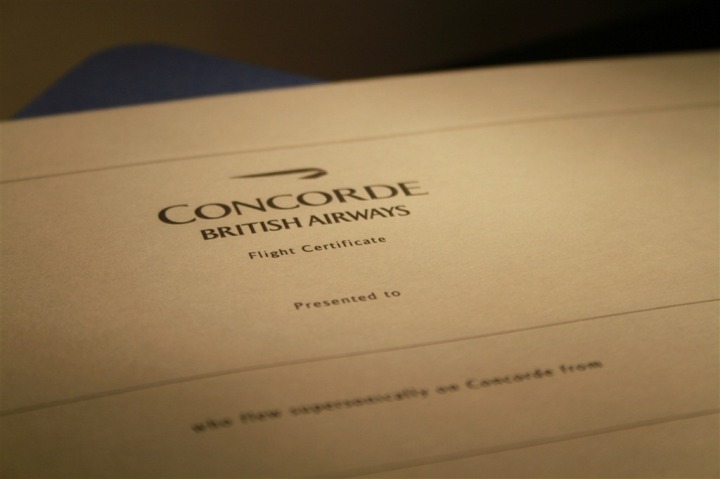 I also asked to go checkout the cockpit, and was welcomed in to take a few photos, which was pretty cool – way different than I expected it to look: 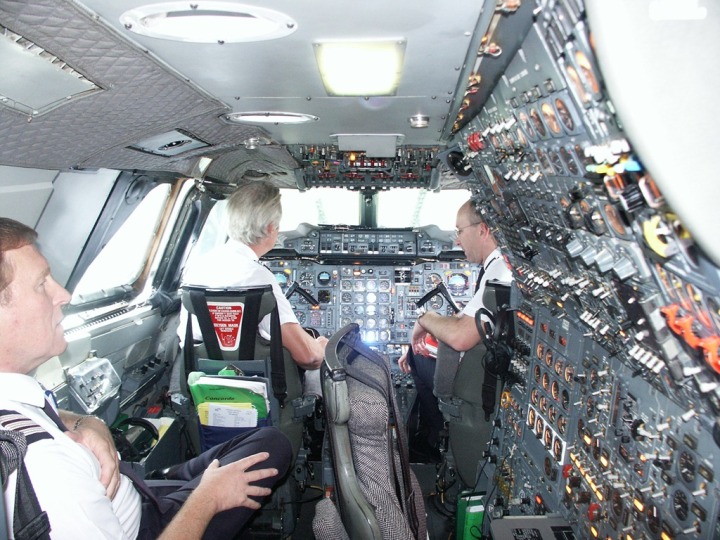 With that, it was time to leave the aircraft.  Before you knew it you were in the hustle and bustle of JFK’s customs and immigration facility and out onto the airport drive – just like every other passenger arriving.  How quickly it all disappears.

As one living in Seattle at the time, later on that fall we’d go down and watch as the Museum of Flight received one of the Concorde’s from British Airways, where it now sits permanently on display.  Here’s a photo I took that day.  The pilot on the left (Les) was actually the pilot on my flight: 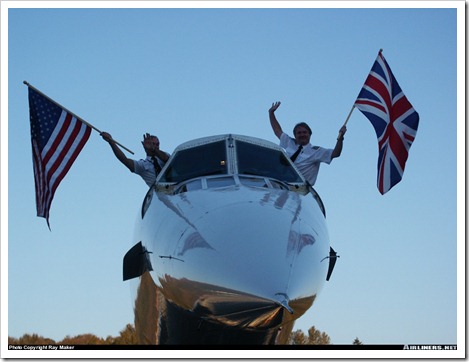 While there are many reasons for Concorde’s cease of operations, as a aviation geek of sorts, I can’t help but be sad every time I think these aircraft are landlocked now.  I’m sure though sometime in the future an aircraft will come along and replace it…someday.