This morning I was up again fairly early – by 7AM (which is way early by me-standards).  I had another brick, though this one a fair bit shorter than yesterdays.

Today’s game plan called for swimming backwards on the course to the second to last buoy.  Then I’d float around for five minutes checking out the currents before heading back in.  In total I’d probably swim 750-1,000 yards.  After the swim I’d do a quick 25 minute bike ride to ensure everything was in working order.

So with that, the swim: 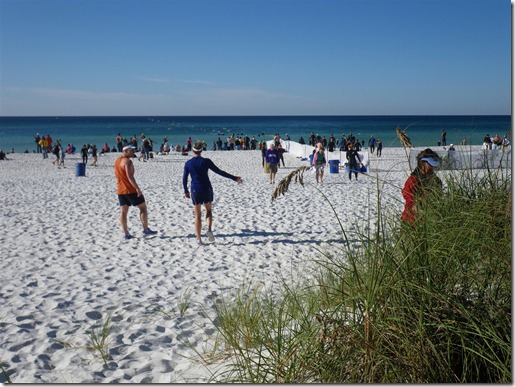 I met up with Lindsay on the beach.  She was scheduled to race IMFL, but got hosed back a month or so ago when she broke her ankle in a gazillion pieces.  But, she still made the trek down here to cheer for a bunch of folks – including Team-Z which has a crazy number of peeps here (60!).

Despite her broke-ankle, she’s still able to swim, so she followed on out into the water for the swim. 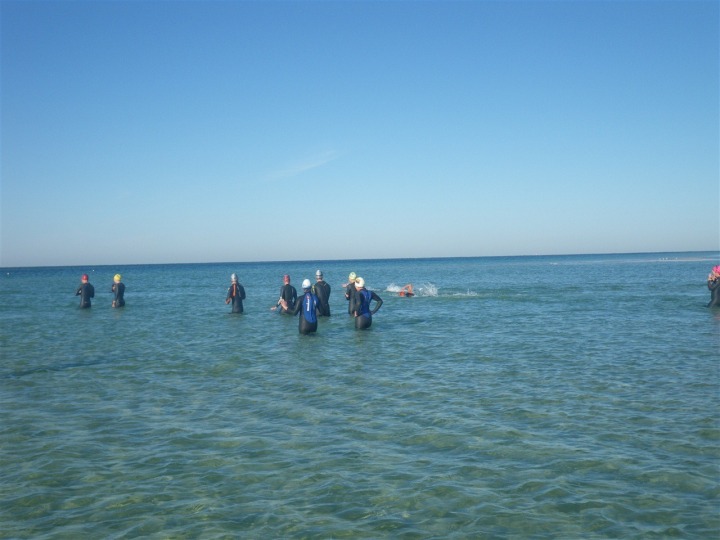 A short bit later I made it out to the buoy and got to the hard task of floating.  The goal here was to figure out which way the currents were going.  But, it turned out more complex than that.  Because the currents were going one way – and the wind was going the other.  So floating there I was acting like a sail, and do the conflicting ‘messages’, I basically sat still.  But I was able to observe the other swimmers and was able to figure out the currents based on that. 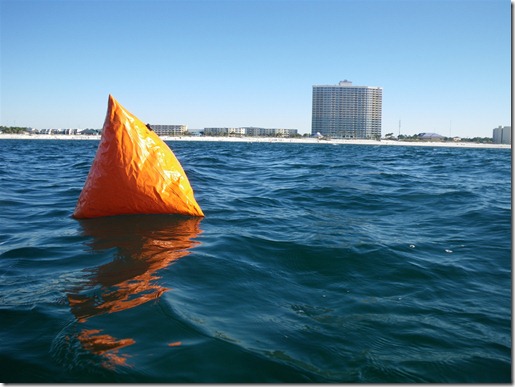 As noted yesterday, you can see how clear the water is.  That’s a buoy line there, and a swimmer off in the distance swimming by.  (Underwater photos taken with Optio W60 little point and shoot) 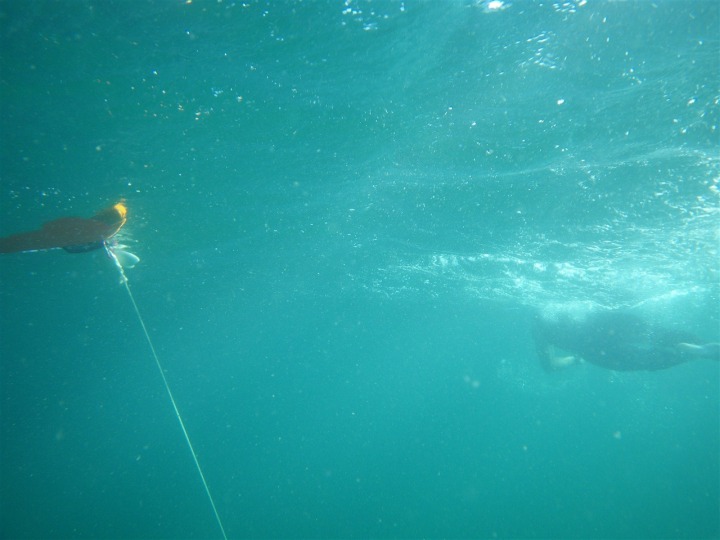 After hanging out for a few minutes, it was time to head in.  Though, I started to do that a dude came on paddling by.  So naturally I stopped for a second to take a picture of him. 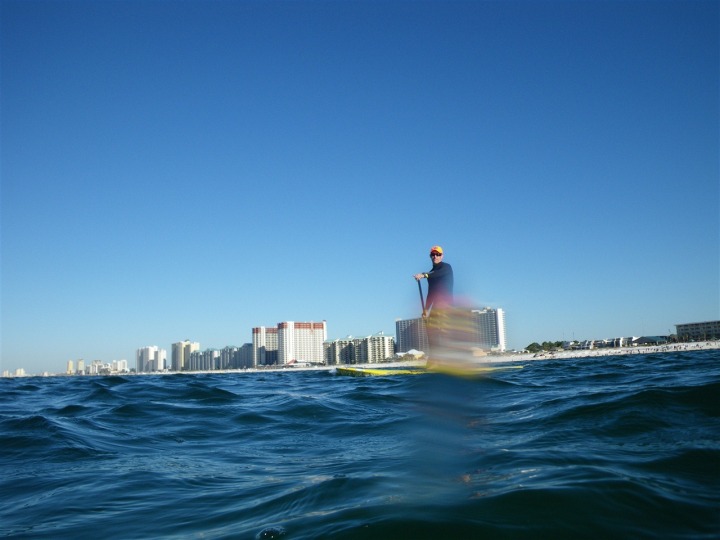 Then it was back onto the beach and up to the rental car for the bike portion. 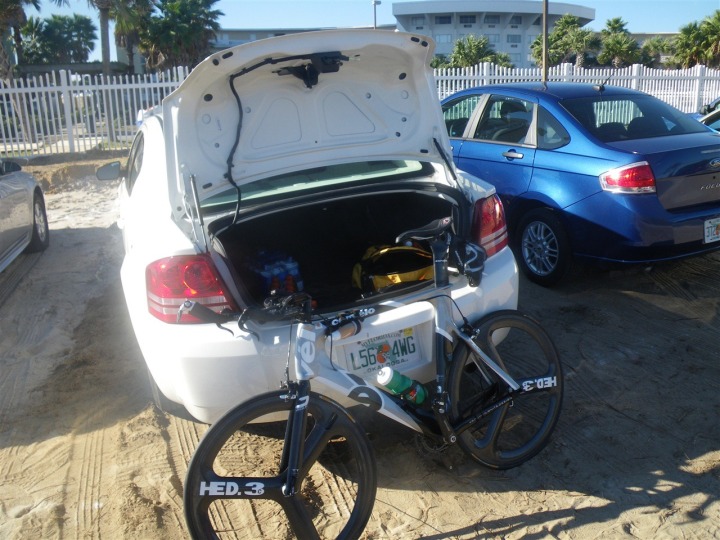 My route would take me out along parts of the bike course along the beach.  It was fairly windy, but you just kinda have to get used to it.  I expect tomorrow (Race Day) will be windy as well. 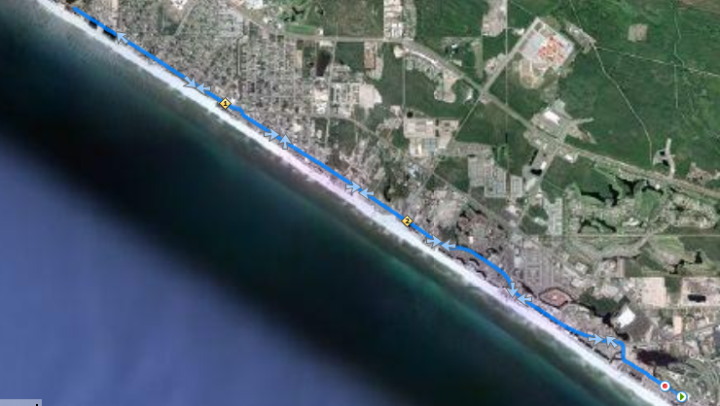 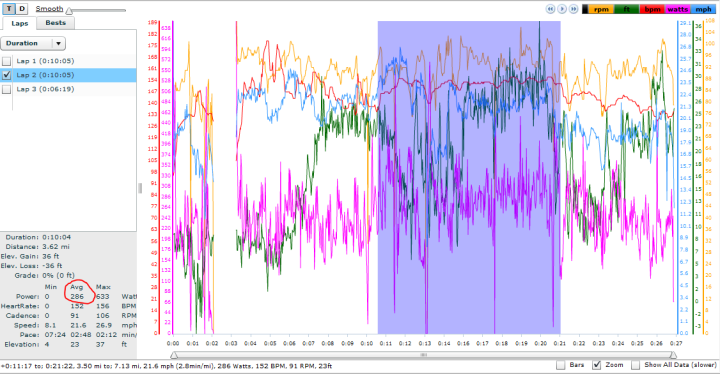 I quickly swung by the ART tent again for a bit more work to get everything loosened up for tomorrow.  As I was getting ‘worked on’, I thought it was ironic that I was in the finishers chute at the time. 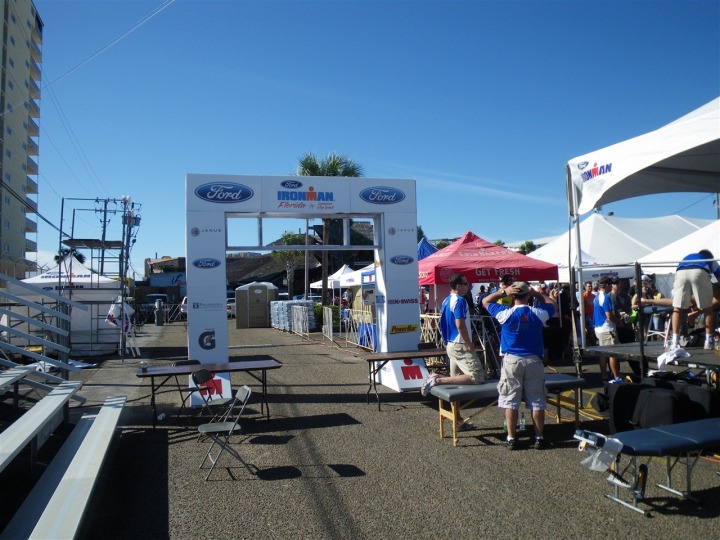 And also then swung by the Ironman Store for a few overpriced items.  With no lines in there, I was in and out in a matter of minutes – super efficient. 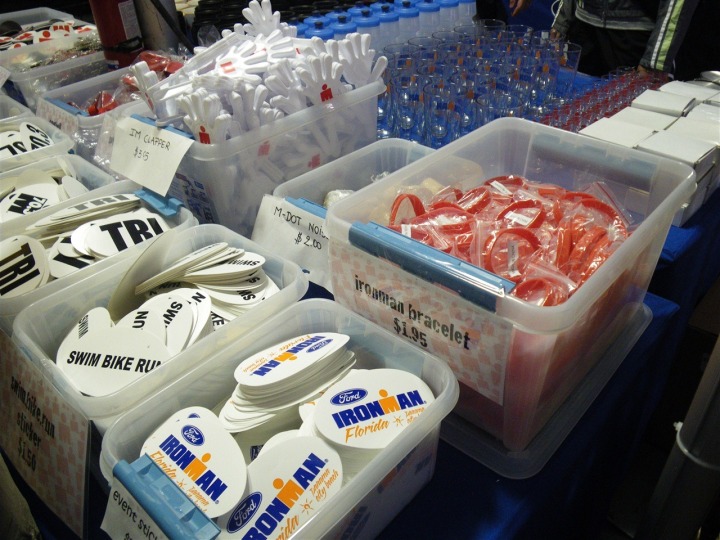 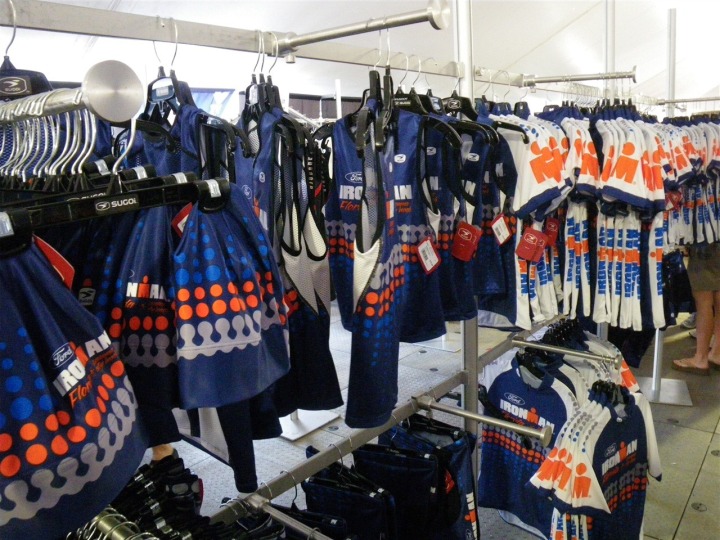 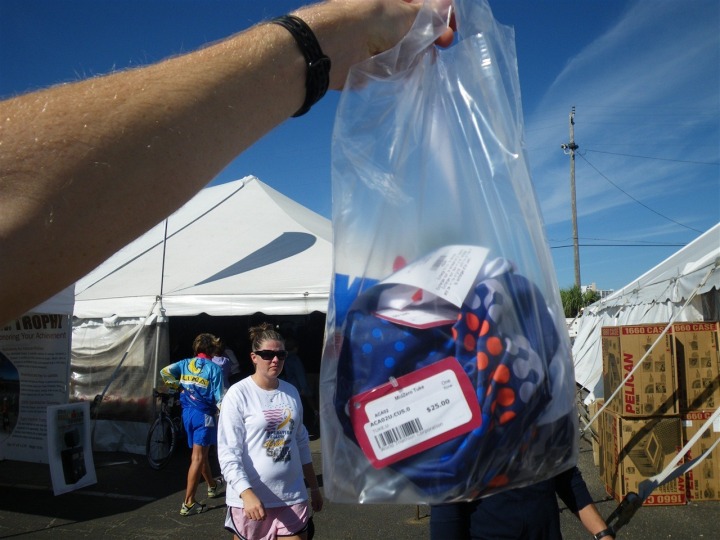 Finally, I hit up a quick road-side triathlon shop for a last minute item I needed for my bike.  Off-site the main Ironman area, it was kinda like those stands outside sports stadiums selling peanuts and stuff.  But I got what I needed and it was half the price as the main shops onsite. 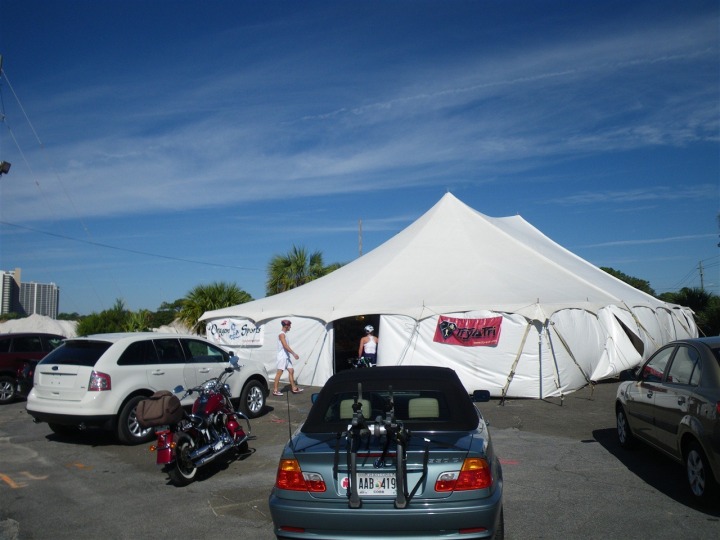 With that, I headed back to the hotel for a few hours of more relaxing and watching The Price is Right. 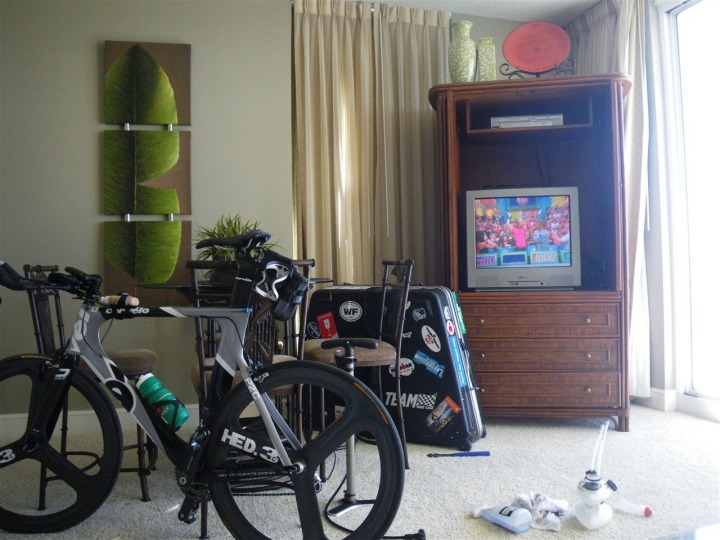 I did a lot of sitting around and eventually made lunch.  Just lying and doing nothing – perfect for the day before a race.

Eventually I got my act together and put together all my transition bags and race bags, along with getting all the stickers on my bike. Ready to roll! 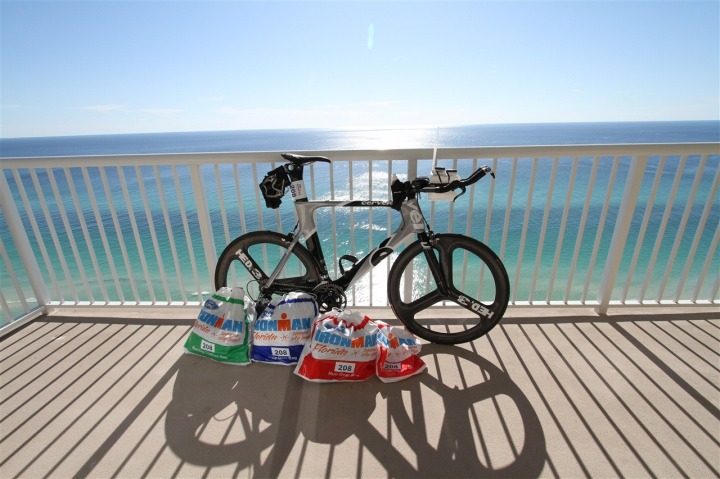 While taking the above picture I started thinking it would be pretty darn nice to sit on a trainer and have this view all day.  So I took of picture of how that would look: 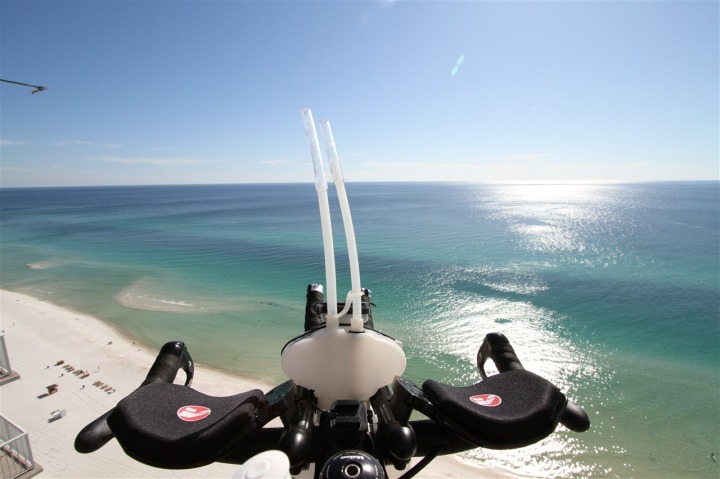 We had until 3PM today to drop-off our bikes and T1/T2 bags.  So I headed down around 1:30PM to get that taken care of – allowing me the rest of the day to lie on a couch.

I found another line, but this one moved pretty quickly: 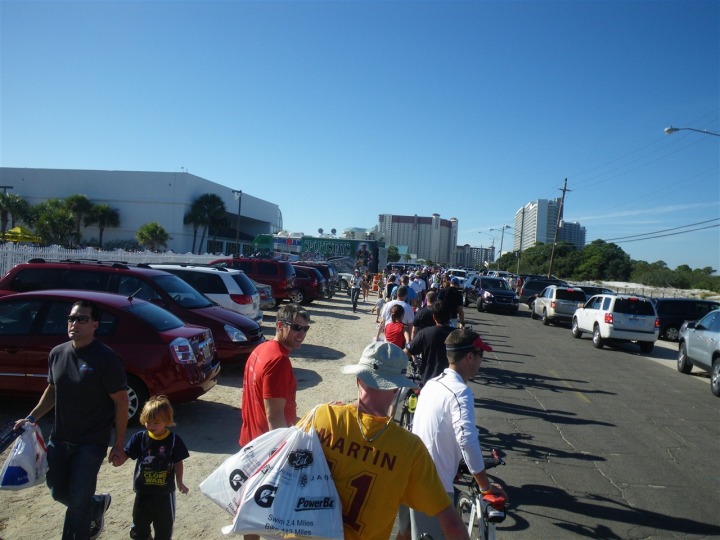 Once inside I was able to drop-off my bike at my rack position (pre-marked).  It’s nice and close to the bike mount line – only a few rows behind the pro’s. 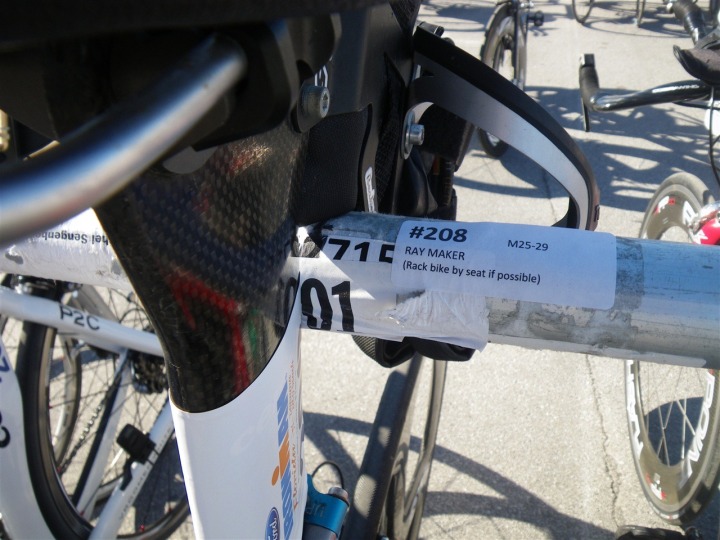 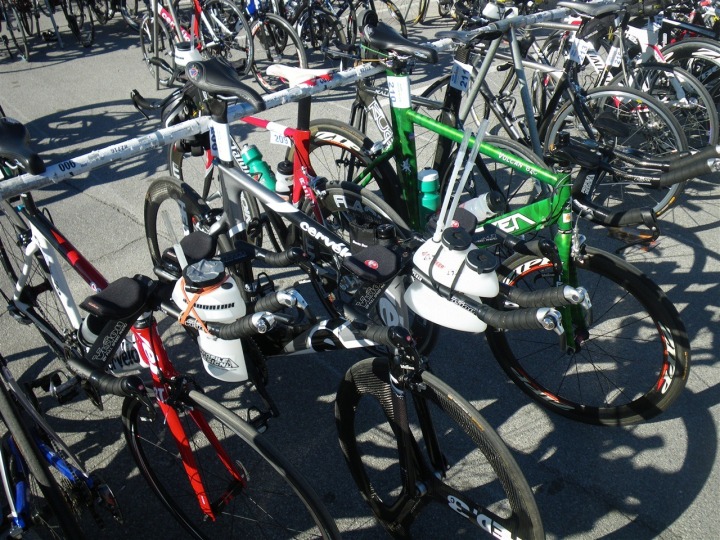 Then I headed over to drop-off my T1 bag.  Again I lucked out with a spot right near the tunnel entrance from the swim – so easy to find if a volunteer can’t find it quickly.  My T1 bag has my bike shoes, helmet and stuff to wear on the bike. 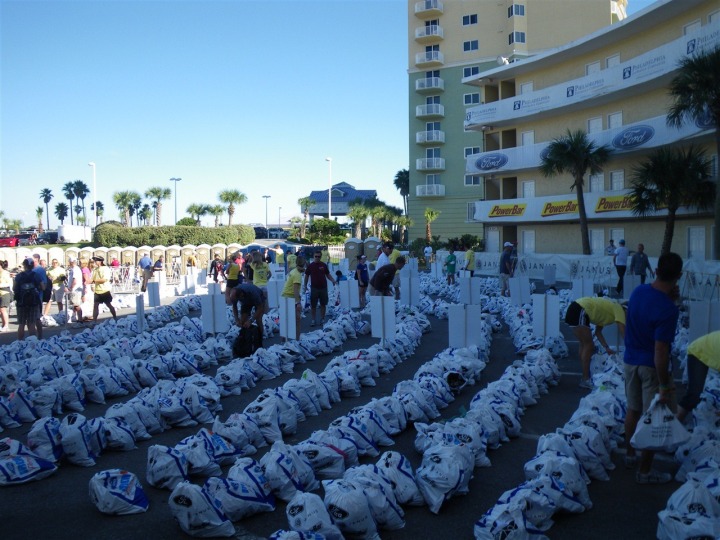 Finally, I dropped off my run bag in the mass of bags there.  This has my run shoes in it, and nutrition for the run. 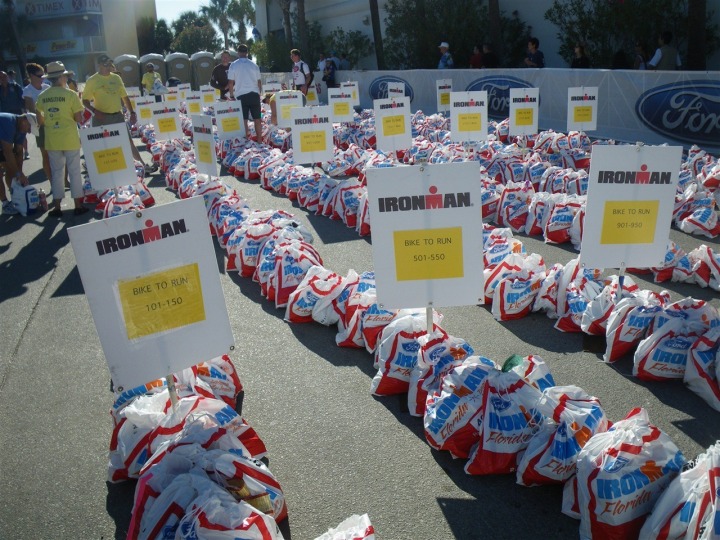 Here’s a quick peak of what the place looks like.  Bikes forever…with palm trees in between. 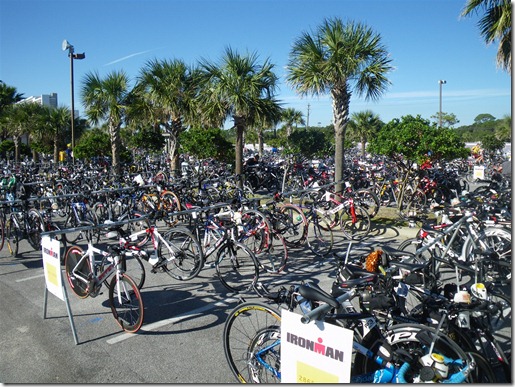 With that mission complete, I went back to my place and sat on the couch and watched mindless TV shows all day long.  I fell asleep here and there and just drank tons (with electrolytes to help retain the water).  Lots of watching ‘The Deadliest Catch’ and other addicting shows.

So now I’m about to head to bed and get ready to rock it tomorrow.  At this point I’ve done the training – which changed post-IMC a bit to focus on pushing it on the run even though I’ll be in pain.  And like any Ironman, it all really comes down to pushing through the pain on the run.  I’m running a set pace tomorrow – 7:40/mile so the little Garmin will keep me focused and make it crystal clear to me if I slack off.  And there will probably be some pain on the bike too – 5 hours in aero is a long time to hold that position, but if I race smart and stretch regularly, I can probably prolong the onset of that.  The swim is what I’m honestly looking forward to the most at the moment (which is very rare for me), I think it’s going to go well, I felt fast the last two days out on the course and if I set the pace early and find the right set of feet I can come out pretty fresh.

While neither my family nor The Girl is down here, I know they’re cheering for me all day long from afar – along with a few other close friends.  So I’ll be channeling their thoughts when the going gets rough (and it will, it’s 9-10 hours after all).  But, I’m feeling good – and hoping that Ironman #3 is the one I want – third times the charm. 🙂

(Note: This was written the day before IMFL, and is being published post-race automatically)