Garmin ECG Feature Is Now Live: Here’s how it works!

As of today, Garmin has released ECG functionality for the Venu 2 Plus watch, for users in the United States. This is Garmin’s first watch to have ECG, following both clinical trials, and subsequent FDA approval, which they were granted last week (more on all that down below). The on-watch ECG functionality will detect and classify atrial fibrillation (aka AFib), as well as a normal sinus rhythm.

On your Venu 2 Plus you can open the ECG app at any time, touch the bezel with your other hand’s fingers, and then wait about 30 seconds for the ECG to complete. After which you’ll get your results as well as the ability to save/export the report via the app, such as to send the PDF to a doctor.

Garmin is essentially the last major smartwatch maker to join the ECG fray. This follows Apple, Samsung, Fitbit, and others who have received FDA approval for their ECG app implementations. For the most part though, what you see on these devices is all very similar, largely owing to the process by which these devices are certified. Still, there are some differences, such as Apple having irregular rhythm notifications (albeit non-continual), whereas Garmin does not. Still, for those needing to do quick spot checks for ECG, this is a huge step forward.

In order to get the ECG app working, you’ll need to have a Garmin Venu 2 Plus watch. Garmin has confirmed that that is currently the only in-market watch they have that has the hardware inside to perform ECGs. That hardware has essentially two major components: A wire connected to the bezel (inside the watch), and a connected (internally) metal ring (electrode) around the outside of the optical HR sensor. This is then further surrounded by an isolation/insulating ring between the metal sensor (electrode) and backplate. Those two components allow the watch to ‘complete the circuit’ when measuring an ECG, and currently only the Venu 2 Plus hardware has this.

While you cannot see the wire connected to the antenna internally, you can actually see the thin insulating strip around the outside of the electrode sensor on the Venu 2 Plus: 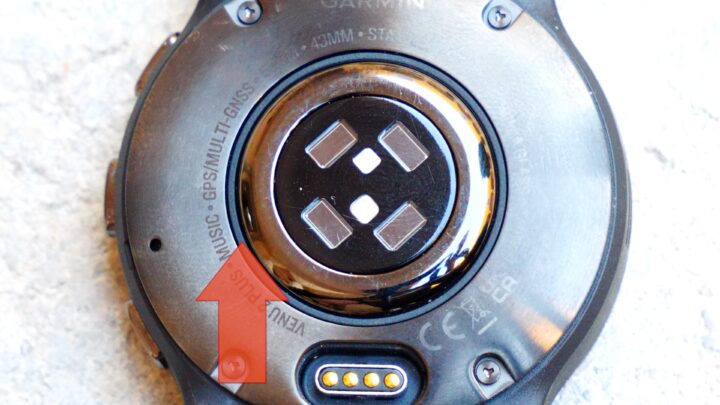 Now compared to that not being present on an Epix seen below (or any other watch, simply flip yours over): 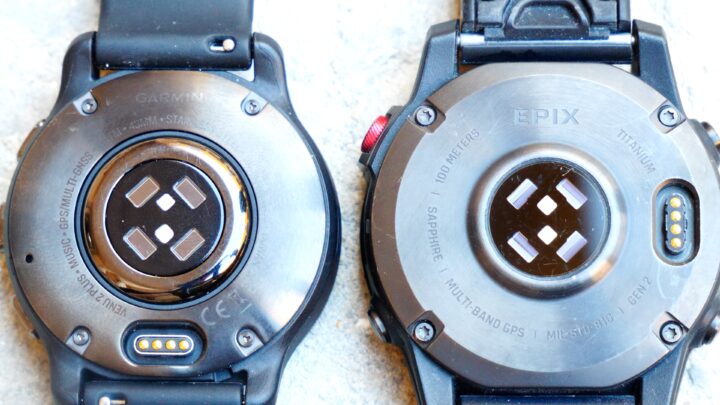 The next bit is that you must be in the US, physically, when first activating the ECG app. This is due to regulatory requirements, and the onboarding process happens via your phone with Garmin Connect Mobile (Garmin’s smartphone companion app). During that process, it uses both GPS+WiFi to validate that you’re physically in the US. You can however do subsequent ECGs outside the US after completing your initial activation (more on this in a second).

Finally, you must have the latest version of Garmin Connect Mobile and the Venu 2 Plus firmware. These versions are:

This Garmin Connect Mobile version went live this past weekend, as did the Garmin Venu 2 Plus firmware version. So if you haven’t upgraded yet, do that now. Finally, if you’re reading this in the seconds after I hit publish (at 7:00AM US Eastern Time), then Garmin also says there may be a very slight delay of an hour or so till the feature shows up as live for everyone.

Got it? Good, let’s get rolling. 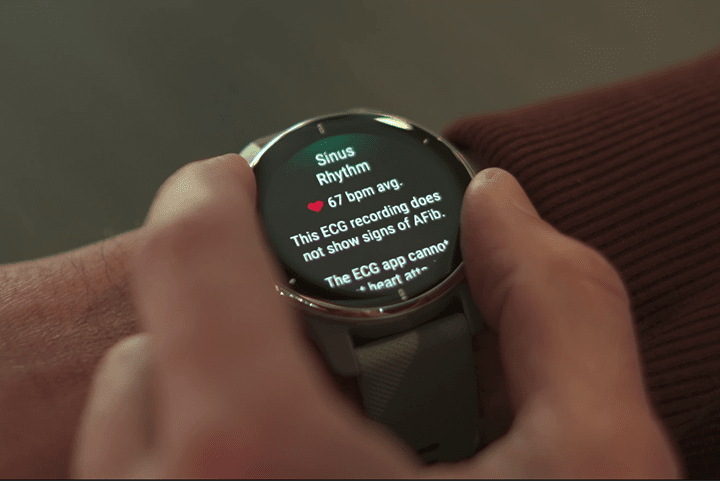 First up is activating the ECG functionality on your (compatible) watch. That requires Garmin Connect Mobile (the smartphone app), to do initial activation. That’s because Garmin verifies you’re physically in the US using your phone’s GPS+WiFi signals. This activation is only required the first time, and any subsequent usage can occur outside the US.

If it’s part of the setup of a new watch, it’ll be one of the tasks you complete (akin to WiFi setup). Whereas if it’s for an existing watch you’ll get prodded to consider setting it up. From there, it’ll give you a quick overview of what an ECG is, and what it is not. For example, it does not detect heart attacks. This is part of the FDA approval terms because it’s considered an over-the-counter medical device. As such, the user must be able to figure out everything purely from the step-by-step device instructions. Meaning, it assumes a doctor/pharmacist didn’t talk to you at all. It also validates you’re 22 years of age or older.

You can also access this via the Devices menu, and confirm the existing setup steps that are present:

Once that’s done, it’s activated on your watch.

You can now go onto your watch into the ‘Apps’ list. This is the same place you’d go to start a Run/Bike/etc. Scroll far enough and you’ll eventually see ECG in the list: 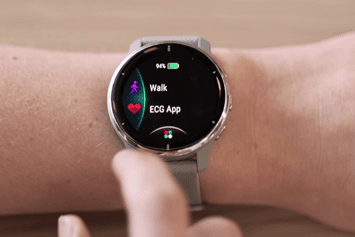 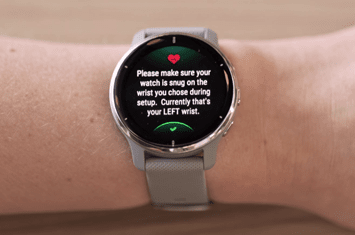 Then, rest your arm and wrist on a table, and place your other thumb and index finger on the metal ring/bezel. Do ensure whatever wrist you set up in Garmin Connect Mobile is the same wrist you’re wearing it on here. 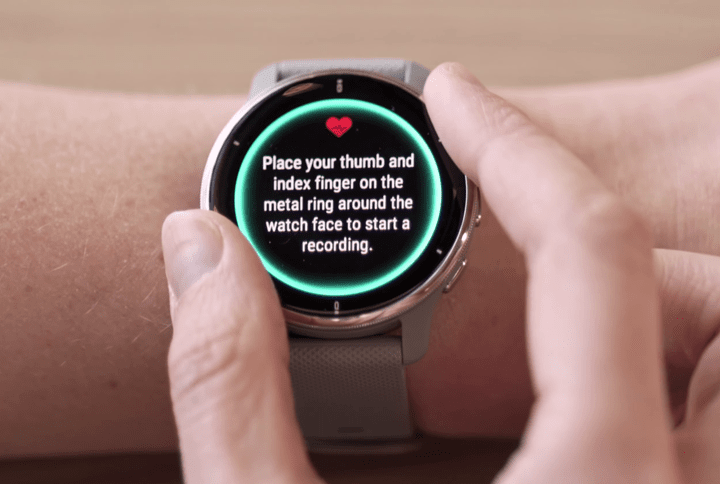 Finally, the ECG starts and you’ll wait 30 seconds. As you wait you’ll see the waveform displayed in real-time, as well as your heart rate and a count-down. If you move too much or otherwise do something unexplainable, it’ll prompt a failure message. 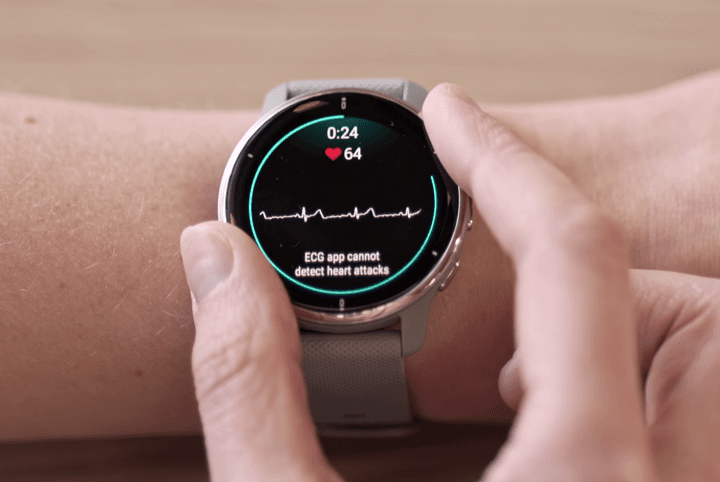 Once it’s done, you’ll immediately get your result. This happens entirely locally to the watch, and there is no connectivity required at this time. Within the results you can scroll left/right along the waveform, as well as select any symptoms you might have had. 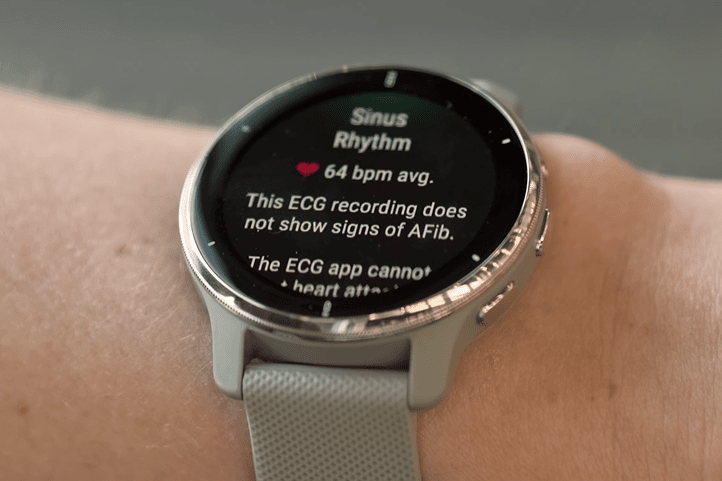 These logged symptoms and full results are then saved with that specific ECG result to both the watch as well as Garmin Connect (mobile and platform):

Meanwhile, back on Garmin Connect Mobile, you can see the full results of your ECG (and historical ones), as well as export out a PDF of the ECG to give to a doctor (or, you know, social media). Here’s an example of a PDF export: 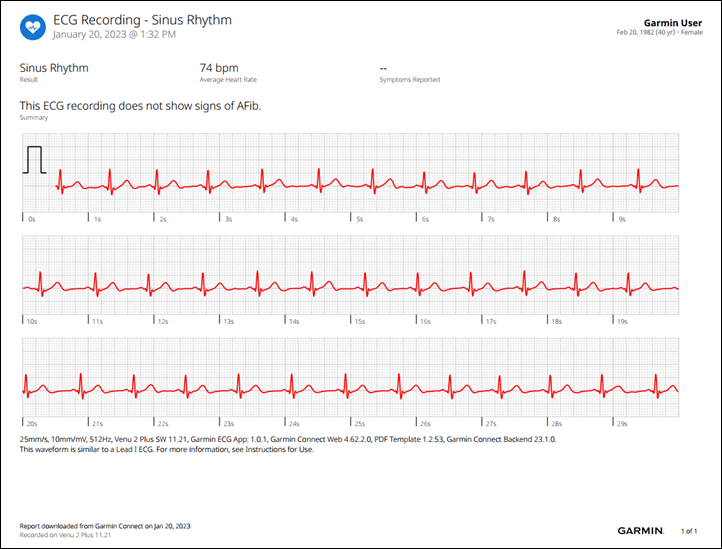 And it’s as simple as that. In fact, by design, it’s supposed to be simple. That’s somewhat the entire purpose of this being a regulated over-the-counter medical device, it’s supposed to be hard (if not impossible) to screw up. Speaking of which, let’s quickly dive into some FDA bits.

It’s worthwhile to take a brief detour to touch on the clinical trials and FDA approval for the ECG App. You may remember about a year ago I detailed out where Garmin stood on clinical trials for their ECG app. The cool part about this is that all of it’s public. The tests, the facilities involved, user counts, and even test protocol. Of course, that assumes said company files all of this under their actual company name. Garmin being Garmin, they did. Apple? Less so – using shell companies to hide that Apple was actually working on it. Of course, Apple was first on the market in the watch form factor, so hiding their work was important from a competitive side.

Without getting too into the weeds, Garmin had initially filed the trials to include 460 participants, however, by the end, they had included 568 participants. In talking to various industry folks, that’s pretty normal, as participants that were initially included are occasionally removed from the study later on. That can be because the individual might not have met the criteria (more on that in a second) upon further inspection, or perhaps there were protocol errors in their sample. As such, in order to account for these participants dropping out in later phases of the study, you sometimes have to increase the number as time goes on. You’d expect to see some increase between the projected number and the final number. Next month, the FDA will publish Garmin’s full summary, which will give us even more details in a final report form.

The key thing to understand though is that Garmin isn’t certifying the Venu 2 Plus as a medical device. Rather, they’re certifying the “ECG App” running atop the Venu 2 Plus, and specifically, they’re proving to the FDA that it was “substantially equivalent” to an existing FDA-cleared device. In this specific case, Garmin was proving substantial equivalence to Apple’s implementation.

Within that, Garmin is only focused on ECG performance. So things like PulseOx (SpO2 sensing), or heart rate during sport, or sleep detection, or any other Garmin health feature – those aren’t being vetted here. It’s purely the ECG feature and specifically within that the detection and classification of atrial fibrillation and a normal sinus rhythm. That’s it.

To do that, Garmin had to basically pass three separate bars/chunks:

1) Clinical Performance: Looking at their clinical trial data, did it meet the FDA’s threshold?
2) Human Factors: Can a normal everyday human with no preexisting knowledge use the device properly using just the instructions shown in the app and on-device. Given it’s an over-the-counter device, this is important.
3) Technical Performance: Does the algorithm meet various requirements for thermal safety, electromagnetic interference, arrhythmia performance, and more.

This entire process, from an official clinical trials standpoint, started all the way back in April 2021 (nearly two years ago). Of course, that’s just when they submitted their first formal paperwork that’s public, not when the engineering and preparations started. All of this concluded about 10 days ago when Garmin received their final FDA approval: 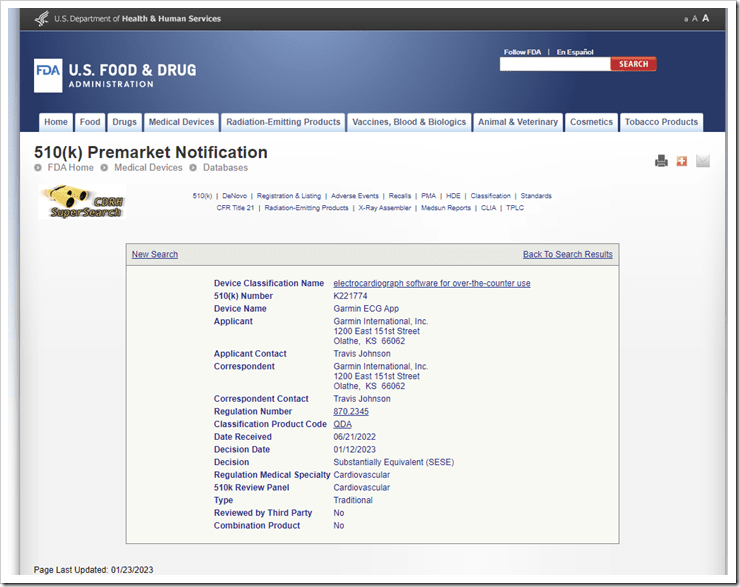 And even though Garmin only received this approval 10 days ago, they’ve been ready for quite some time to hit the ‘Go’ button on toggling this to live for users. This is akin to what we actually saw from both Fitbit and Apple, who received approval and then lit it up for users within days of that approval happening. 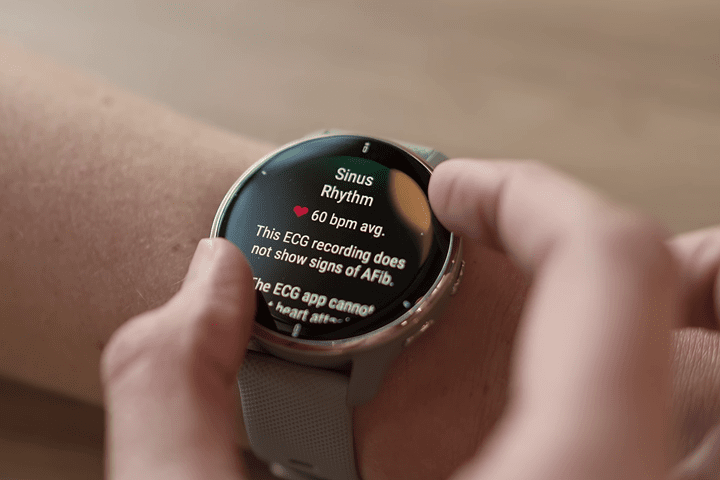 Which of course brings us to the next logical question – what do the timelines look like for other countries? Well, that’s messier. Garmin’s official statement is as follows:

“Garmin intends to continue to expand its portfolio of products supporting the ECG App and launch it in new regions in-line with necessary regulatory approval.”

Now, where it goes from here is substantially more complex. Some countries will take the FDA clearance more or less as-is, allowing for relatively rapid transfer and approval. However, others require starting much of that paperwork process again.

For example, I asked whether or not there were plans for Europe/EU and Garmin would only confirm that there “is a plan”, but couldn’t say anything more specific. They did however note that a new EU regulation that came into effect in 2021 marked a pretty significant shift in the certification approach, making it more thorough than previous, and also extending the timelines too. Here’s a quick article that explains the differences and impacts. Obviously, I’d expect Garmin is already quite a ways into that process, but it’s still…well…a process (just as it was for Apple, Samsung, and others).

The good news though is that like Apple and others, this doesn’t stop Garmin from releasing new watches with ECG hardware, that’s simply turned on by region as approval happens. And that’s also true of the Venu 2 Plus. Someday down the road if/when Garmin gets EU (or any other country) approval, toggling that region on is a relatively trivial affair for watches that have the right hardware already.

As for future hardware, I’d expect there will be a baseline point sometime this year when essentially all future Garmin watches from a given price level have ECG. After all, it’s on relatively inexpensive competitor devices from both Fitbit and Samsung. And even the Venu 2 Plus itself is only at the lower end of the mid-range Garmin pricing these days, with far more expensive units above it that would certainly be logical candidates for ECG inclusion in new hardware variants.