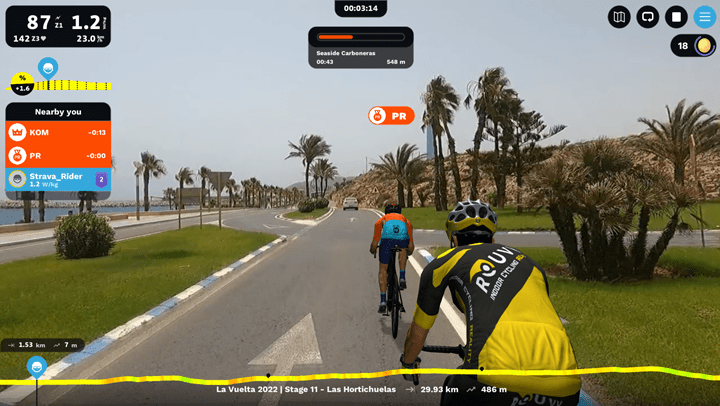 Today, Rouvy has announced (and rolled out) the first of their new features for the upcoming winter riding season. This new functionality lets you compete in Strava Live Segments within routes on the platform, including showing virtual avatars for your existing PRs, as well as the KOM. These segments are then uploaded to your Strava account and will appear in the virtual leaderboard like other Strava indoor-ridden segments.

Now this feature is available as of today (this morning) within the app, however, right now it’s just rolled out to the Vuelta stages, for which Rouvy is a partner and has chunks of the stages from this year’s race. Within each of those Vuelta stages, Rouvy has curated a handful of Strava Segments. In other words, you won’t see a gazillion Strava Live Segments like you would outdoors in the real world. Instead, there’s roughly 3 or so per stage. Some are longer, some are shorter. Just like in real-life.

Rouvy says though that once they get past the Vuelta, they’ll work to expand it beyond just these routes, ultimately, to all routes. That’s typically how Rouvy has done things in the past for other features, where they start with a small group of routes, and then after a short test period, it usually expands pretty quickly to everything.

For today’s test ride, I loaded up the app and poked around at the list of Vuelta stages, along with a list of the Strava Live Segments for each one. Given I live in the Netherlands, and given this would be the 3rd workout I’d done at this point in the day, I opted for an easier/flatter stage (which, is every stage in the Netherlands). So, Stage 2 it was. This is also handy in that the first Strava Live Segment is a mere 2KM into this stage. 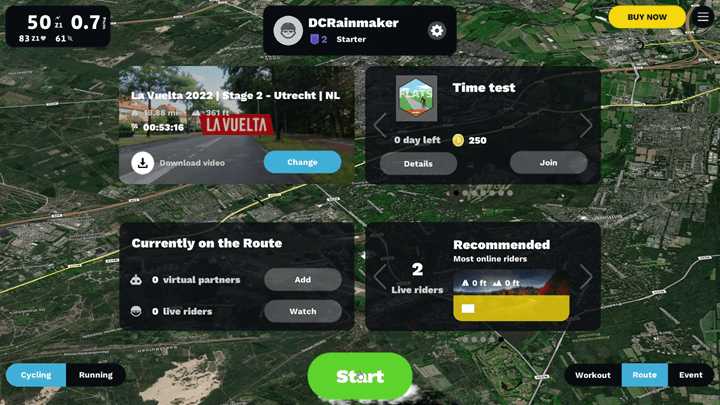 Next, when starting the route, it’ll ask which ride mode to use. For the time being, Strava Live Segments are only supported in ‘Time Trial’ mode. So, that’s what I selected. 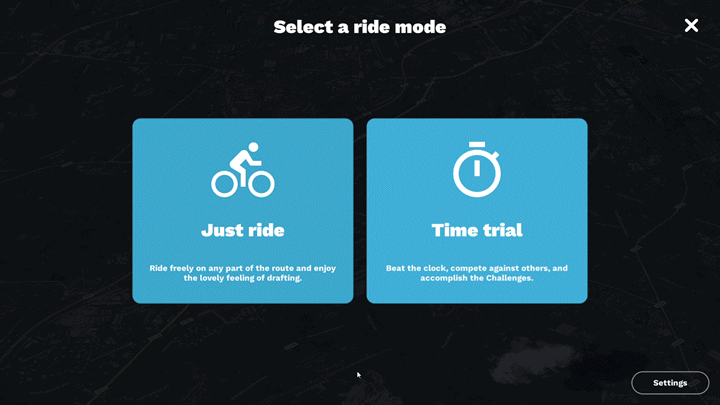 For those unfamiliar with Rouvy and their augmented reality, you’ll see real roads that are recorded outside in real-life. However, they superimpose rider avatars, shadows, and plenty more, making it feel like you’re riding bikes within these recorded videos. The speed corresponds to your pedaling power/speed, so the effect works pretty well.

Once I got cooking along, it was about 2KM later that the upcoming banner popped up over me. You can see it in the screenshot below, showing the ‘Sprint to Amersfoort’ segment as approaching. It lists the distance of the segment (0.71mi), and the significant elevation gain (13 feet). Again folks, welcome to the Netherlands. And yes Dutch peoples, I know there are grand cols in other parts of the country, where you can conquer hills that do manage to last at least a couple minutes. 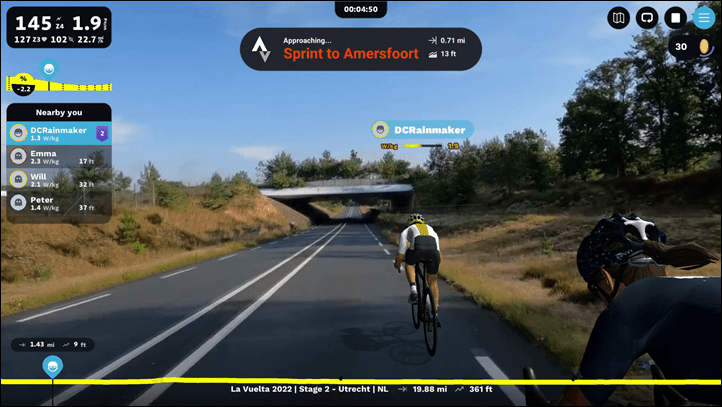 As I approach the start line, you’ll see on the ground the marker. In this case, it has the unfortunate placement of being precisely where the shadow of the bridge meets the sunlight, so the effect isn’t super awesome because the video is briefly overexposed (a camera problem, not a Rouvy problem): 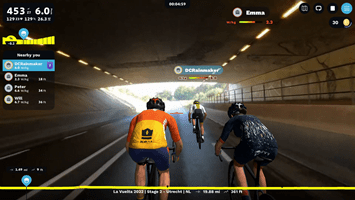 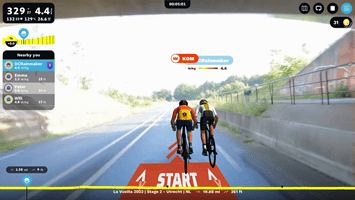 In another section later, the effect is much better, because the lighting of the footage is better: 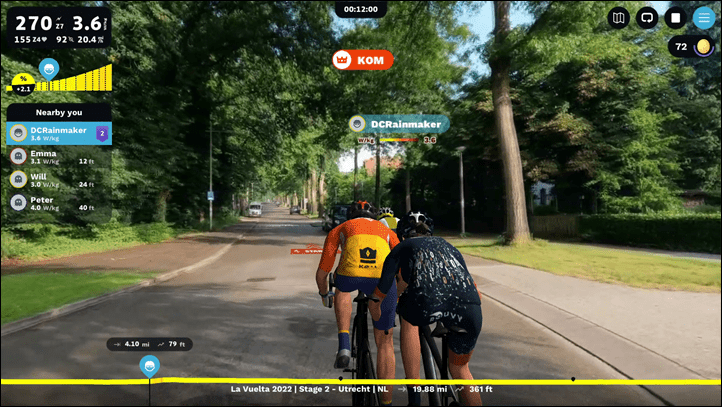 In any event, a few seconds later it’s suffer-time. No relation to Sufferfest, because that’s an entirely different system.

You’ll see the KOM avatar up ahead. He’s got a unique orange jersey, including a yellow bottom option that literally says “KOM” on it. Plus of course, the thing hanging over his head showing KOM. Also, it says KOM on the left side too, and that he’s 1-second ahead of me. 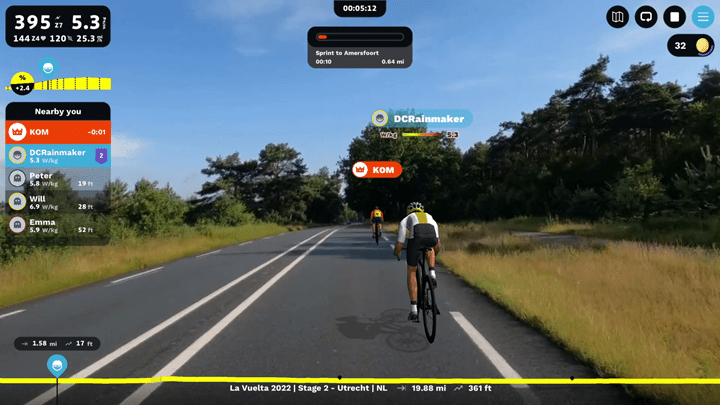 Up in the middle of the screen there’s the suffering progress bar, indicating how much distance I have remaining, as well as my current time. 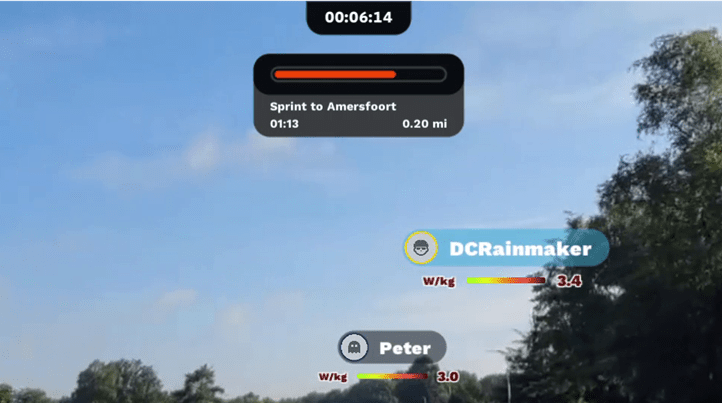 Here we are towards the finish of this segment, and you can see Emma is trying to get frisky and go for the pass at the line. 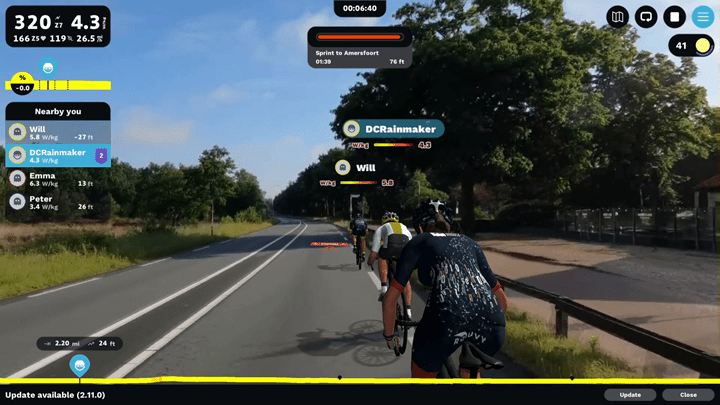 Clearly, I didn’t let that happen. I held my ground, and waited till crossing the line before giving up. 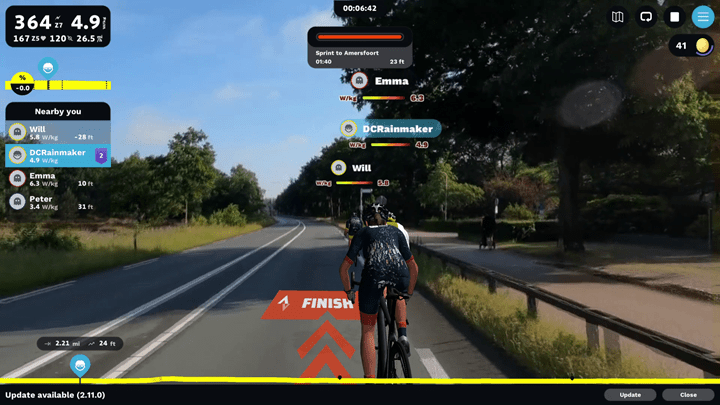 Here we are after crossing the line. You’ll see up top it shows my final time (1:41), as well as how far behind the KOM I was (17 seconds). Emma is now passing me, but what she doesn’t know is that it doesn’t count anymore. Because nothing in life counts unless it’s on a Strava Segment. 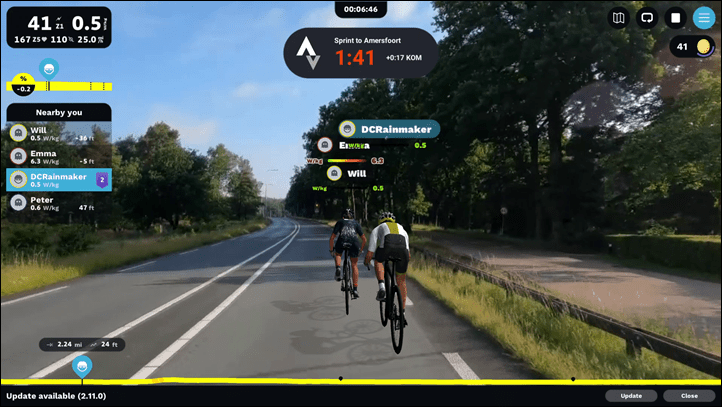 Some minutes later, we do this entire dance again. Except this time, my legs let Emma win. And by ‘let’, I mean, I had no choice. I was kaput for the day. 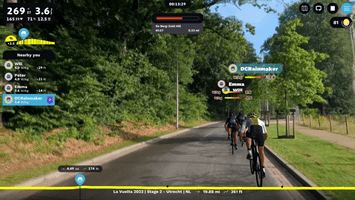 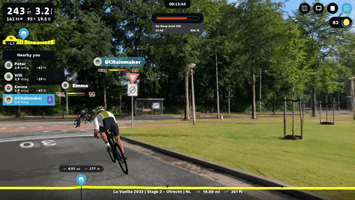 Now, after your ride, you’ll see the Strava Live Segments show up towards the bottom of the ride summary page. You can see each of the Segments you’ve crossed, and your times on them (as well as PR, if you’ve done those previously). 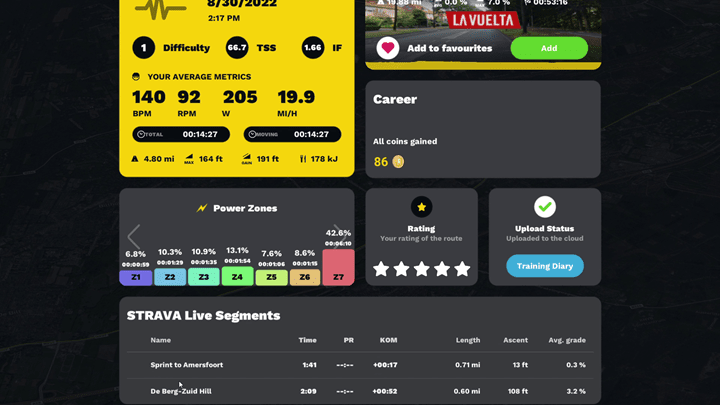 Then, with your ride synced over to Strava, you’ll see those segment results on your ride summary. Keep in mind, this is the virtual segment leaderboard, and not impacting real-world rides. Strava has two leaderboards these days.

So in virtual-land, this particular segment has been ridden by 68 people so far. 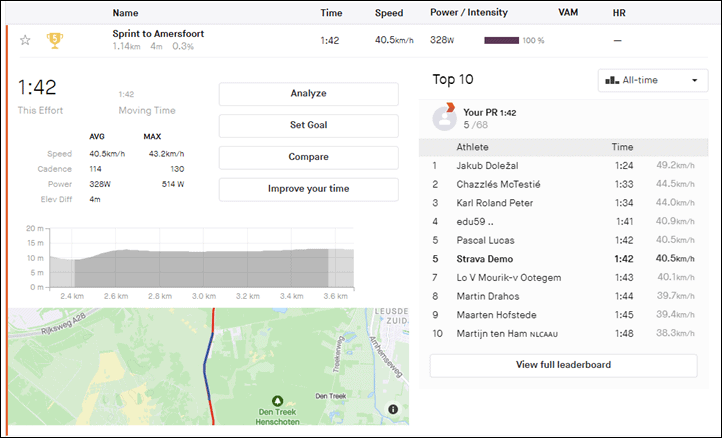 Whereas a segment in that same area has over a quarter of a million attempts (259,000) at present. Point being, no, nobody is taking away your real-world Strava titles with this. In fact, this year’s Vuelta pro riders didn’t trip any of those Strava Segment leaderboards on this first segment, likely because being in the first 2KM it was probably in the neutral zone (I’m too lazy to look up the exact zone start for that stage, but undoubtedly it was).

Strava Live Segments on indoor platforms is hardly new. In fact, exactly 10 years ago this week it first debuted in a Wahoo Strava Segments app, albeit, that was later removed from the app store. We’ve seen Kinomap do it a few years back, and I’m sure others have had it since then.

However, what is reasonably different here is the overlays of avatars onto real roads/videos, representing the leaderboards as well as your efforts. Plus, of course, the pulling of stats directly from Strava in real-time, and then uploading those afterwards.

Now there are still some things that didn’t make the cut for launch today. First, rider avatars will do some small celebrations for nabbing the KOM or your PR. Additionally, also some gestures for not winning anything. Second, they’ve got an update planned to show the Strava Live Segments on the route profile, as seen below. That looks quite nice. 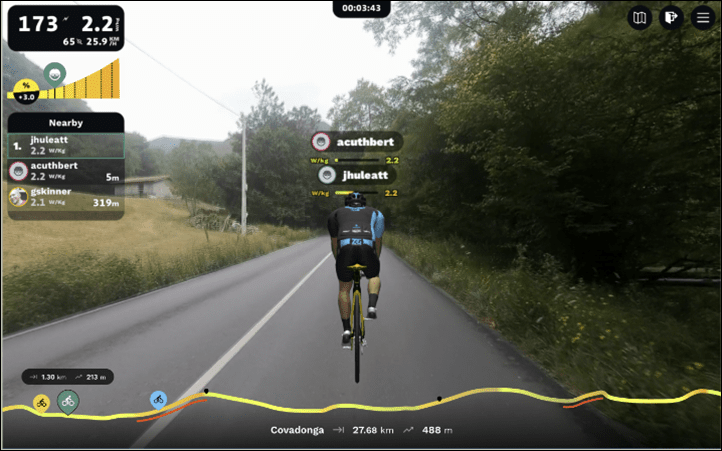 Finally, note that like other Strava Live Segment features on real-world bike computers, this does require a Strava subscription. However, Strava does have a free 60-day trial, which does include the Strava Live Segments feature functionality with Rouvy. Now, as cool as this is, as I said in an Instagram story back at Eurobike in July, it’s what’s coming later this year that’s even cooler. More on that down the road.