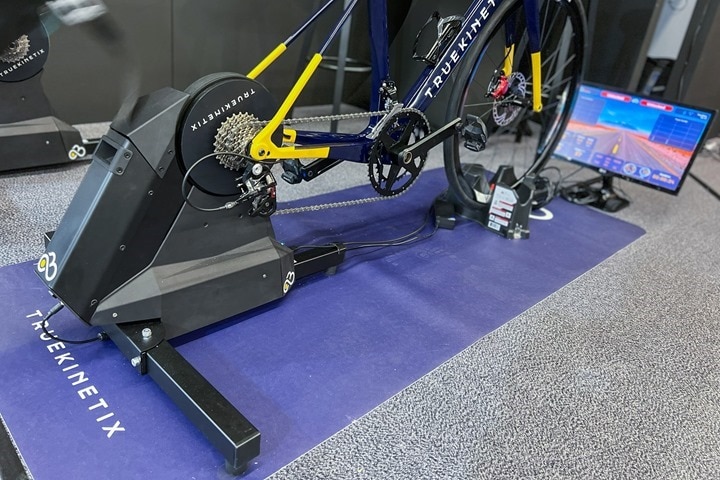 This year at Eurobike, TrueKinetix announced their first smart trainer, which takes many of the features found in their higher-end smart bike, the TrueBike. This trainer has a slate of things we simply haven’t seen before on other smart trainers. It’s got integrated WiFi, an HDMI port with a built-in training app, virtual gearing (in a trainer – we’ve only seen that in bikes), and even a USB port for powering whatever it is you need to power.

Of course, it’s also got all the usual smart trainer things too. Connecting to apps like Zwift and TrainerRoad with ANT+ & Bluetooth Smart, max wattage of 2,600w+, changeable resistance/incline up to 30% (yikes!), status lights, interchangeable cassettes, and no power cord required either. Albeit, as one might expect, this one is a bit pricey. More on that in a second.

Just a quick reminder that as a first look post, this is not a full review. First look posts are typically quick looks at a product at a trade show or like event, and thus don’t have any meaningful amount of real-world testing. That all comes later. 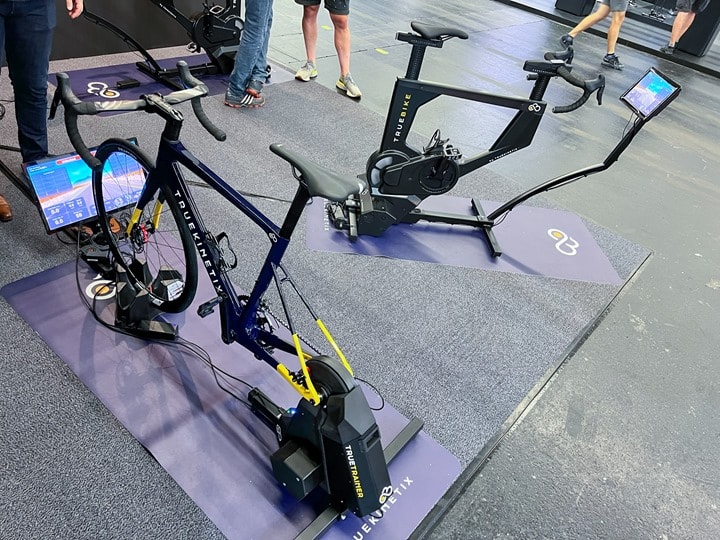 First up, the name of the trainer is the TrueTrainer, in line with their TrueBike. As a reminder, that bike is pictured above, so you can get a rough scale of things. For example, in the bike it includes a small display, that display has a full training application in it, which connects via WiFi to the internet for uploading to sites like Strava or TrainingPeaks. Of course, you can still use the TrueTrainer (or TrueBike) with any 3rd party app too using either Bluetooth or ANT+ (and WiFi maybe, more on that in a second.)

From a quick specs standpoint, not everything is finalized, but here’s where it stands:

Notably, there are three different SKUs offered here, with three very different price points, based on different levels of features. I’m not exactly sure this makes a lot of sense for a company of this size, but here they are: 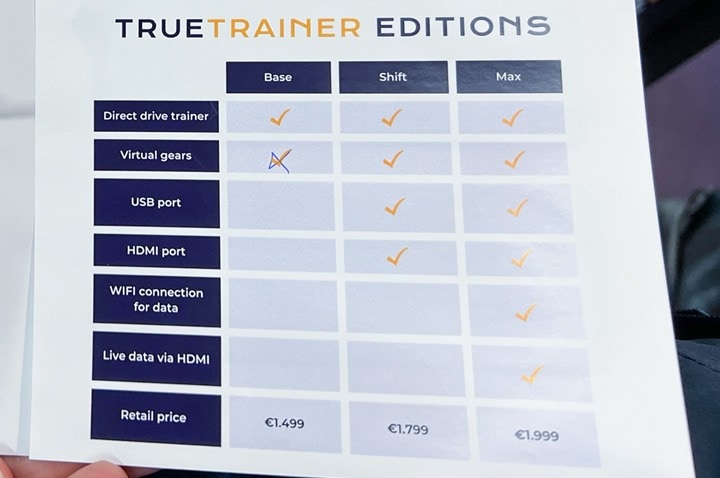 However, some of the more interesting specs are things not in the standard list I usually use. So, let’s go through them one by one. First, is the HDMI out. This is basically a carry-over from their bike, which shows a live data feed of your training stats. There’s a small embedded Linux app that runs on the bike (and now trainer) that has a simple training overlay with your stats, and also controls the WiFi bits. This means you’d connect the HDMI cable to a monitor of your choice: 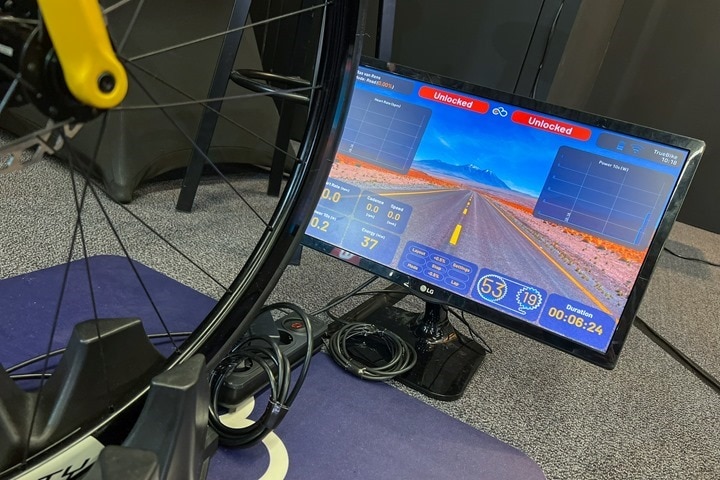 Again, in 2022, I’m not really sure there’s a lot of demand for this, as the vast majority of users are going to be using 3rd party apps. But it sounds like there may be more applicability in cycling studios or such.

Next up, there’s WiFi. This allows configuration and broadcasting of data, though, it’s not 100% clear yet on when it’ll be transmitting data to Zwift and other apps. The indoor trainer industry has (thankfully) agreed upon using the Wahoo Direct Connect protocol for wired and WiFi connections. This was introduced on the Wahoo KICKR series a few years ago, and then Elite added it to their Elite Justo. Both of these though required extra dongles, so this would be the first company to leverage it natively in a trainer – which is great. And more importantly, all of the main trainer app companies have adopted this already, so the infrastructure is mostly ready to start seeing usage. 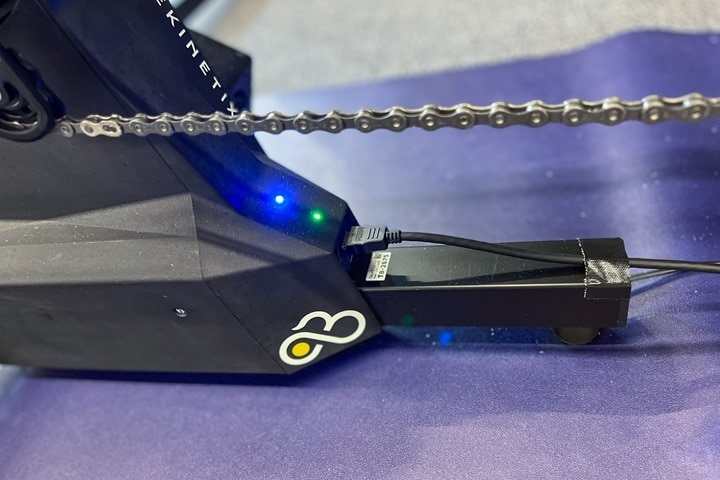 Speaking of connecting things, in addition to the HDMI port (on the two higher-end units), there’s also a USB port for powering stuff. This is powered based on your riding, which in turn charges a battery. The entire trainer in fact can be charged using your own riding power. You’ll see the cooling system off to the side. This is because the unit has an actual motor in it, just like their bike does. But more on that in my full review down the road. 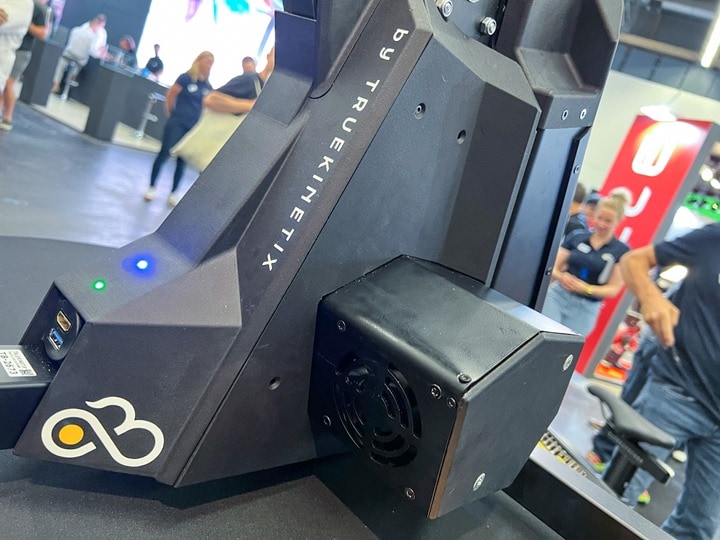 Next up is the virtual gearing. The idea here being you can make your cassette something it’s not. So you can create virtual gears, which in turn can remap your physical gears to something else in-game. I’ve had this explained to me a few times, and I even tried to ride it (but the bike was having some mechanical issues). I’ve also tried to have GPLAMA re-explain it to me, and neither of us really grasp what this is yet. I see a glimmer of potential here, but I just need a few rides on it to really nail it. Again, this could be super cool, I just need some real-world rides. 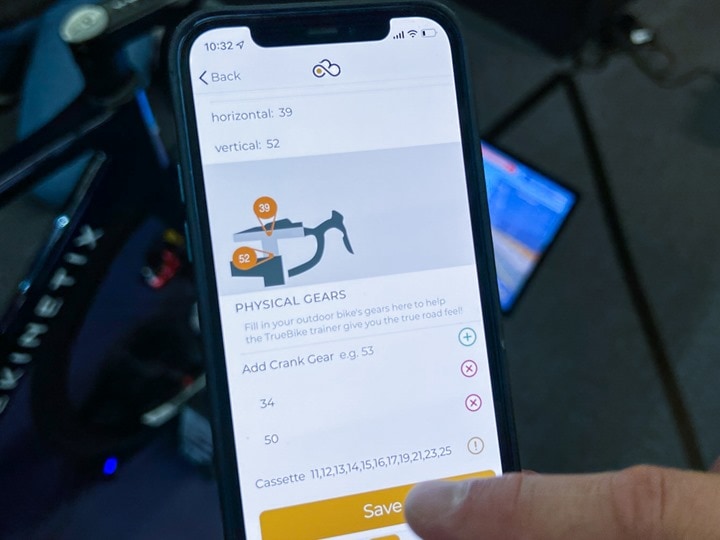 Now the main thing on the TrueKinetix bike is their True Force technology that aims to better mimic the outdoor ride feel by using an actual motor inside. That concept is carried over here to the TrueTrainer. I gave things a quick whirl out on the show floor, and it felt good – but without cycling shoes or mixed gradient, it’s hard to really judge things. 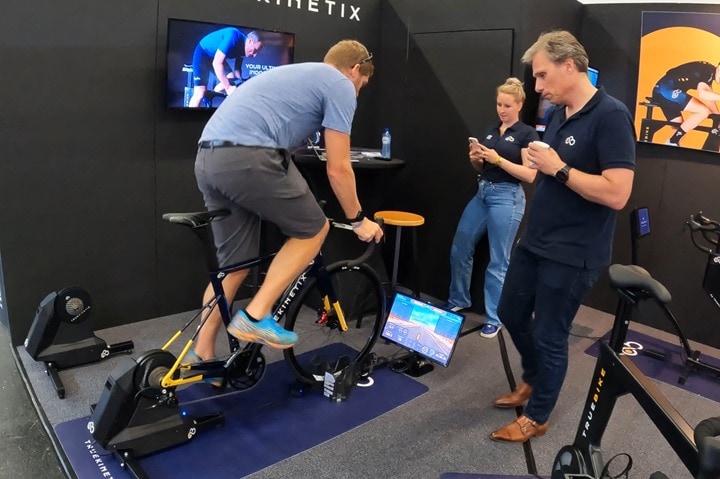 Same goes for noise, with all the show floor noise, there’s no way to make any judgments on sound or such here. That’ll have to come later in a full review. 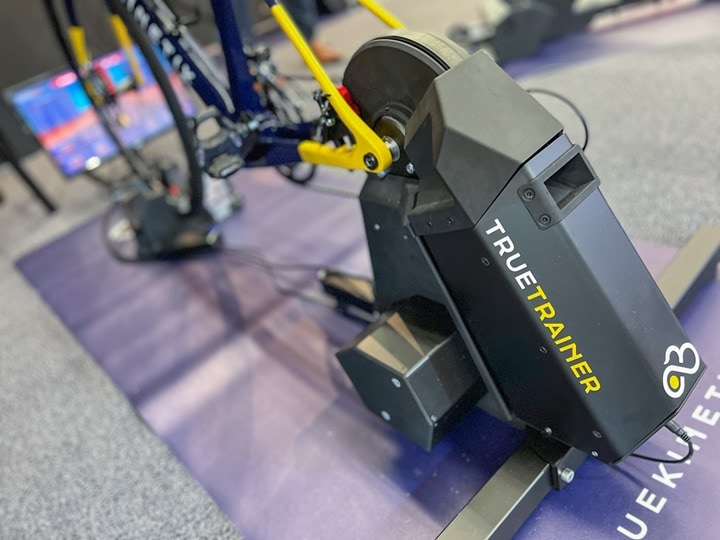 Shane Miller of GPLAMA and I were talking over lunch the other day, about the rise of smaller trainer companies in the indoor space. While there have always been alternatives, for the most part the indoor smart trainer space was the realm of Tacx/Elite/Wahoo/Saris (and prior to that RacerMate). But over the last year or two, we’re seeing companies like True Kinetix or ZCycle or Oreka pop up, that on the face of it are hard to compete directly with the big names. However, Shane pointed out that what we might be seeing is the start of the boutique trainer era. Meaning, sorta like any other boutique brand, they don’t aim to compete in every market and at every price point. Instead, they aim to check boxes for those that are often less price sensitive.

In the case of TrueKinetix, that’s likely the case here. The price of the base trainer exceeds all of the higher-end options on the market right now (street-price), though, does largely compete on specs. It’s the extra features that are unique here that it’s charging a premium for. But, in line with the boutique angle, this unit is only going to be initially available in the Netherlands and neighboring countries. Though, TrueKinetix aims to expand that next season.

As for the trainer itself, having only a few seconds on the show floor isn’t enough to test it fully – either for road feel or accuracy. I like the idea of integrated WiFi (if it adopts the agreed-upon DirCon semi-standard), and I’m never opposed to more USB ports in my life. I honestly don’t know what to make of the virtual gearing at this point. It might be great, it might be pointless. I just need a few rides to wrap my head around it. At some point later this summer or early fall, I’ll dive into testing one in the DCR Cave.

Still – like many other boutique markets, it’s often less about specs and more about brand or connection to a brand. TrueKinetix has seemingly established that with their existing smart bike customers in the Netherlands, so it’ll be interesting to see if they can not only carry that over to the smart trainer realm, but do it at a time when the indoor trainer business is ripe with solid options at very reasonable prices.