Peloton Tread Screen Falls Off Mid-Workout, Peloton Says to Fix It Yourself (Photos and Story)

May 6, 2021 by DC Rainmaker|Sports Technology News and Reviews|Comments (52) 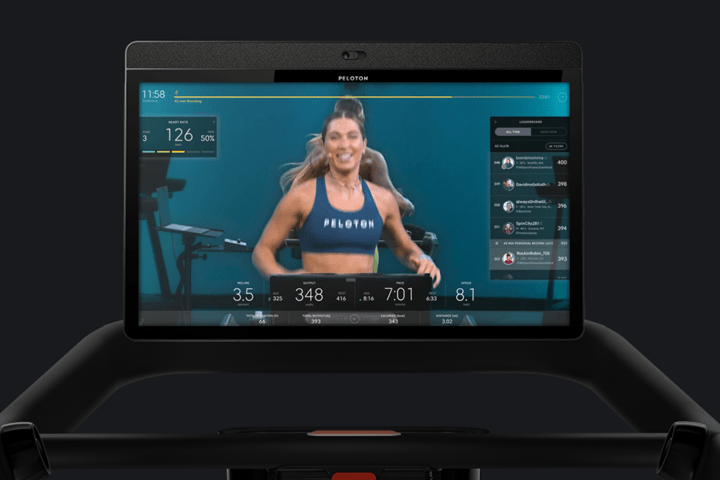 While most of yesterday’s Peloton treadmill news was focused on the higher-end Tread+ and safety risks to kids, there was actually a secondary story at work – the recall of the cheaper Tread units (without the + after their mode name). Those models were recalled because their display consoles were falling off. That model is about $1,800 cheaper than the Tread+ and features a standard treadmill belt as opposed to a slat-design belt. It’s also smaller and has a smaller screen, but it wasn’t recalled for the same reasons as the Tread+. You can see the two units below for comparison: 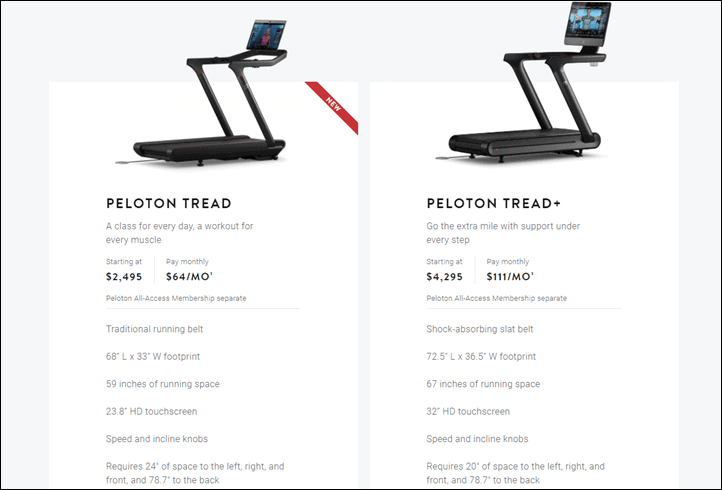 This story is about what happened to one customer that had the display fall off their Tread unit, and then the subsequent customer service journey they’ve gone through – which included the user struggling to get Peloton to actually respond, Peloton then telling the user to install the display themselves, then canceling their account, bricking their treadmill, and then telling them they could pay $13/month if they wanted to continue using Peloton.

The Front Fell Off: 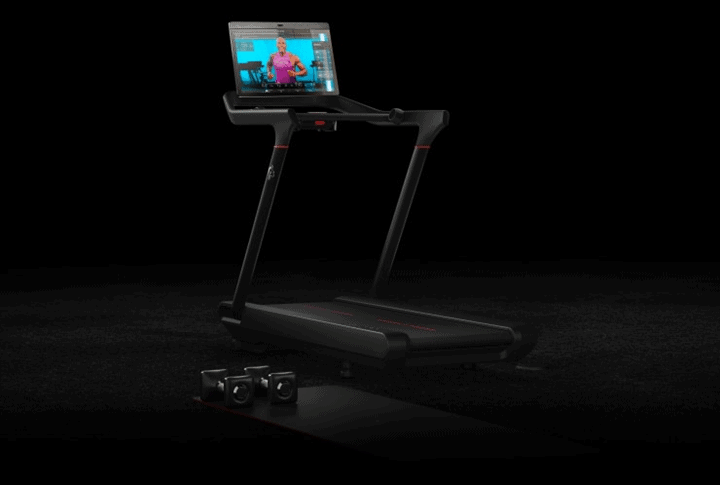 After yesterday’s story, a DCRAINMAKER reader from Canada actually reached out, as mid-run their Peloton Tread unit decided to ditch the front screen mid-workout, initiating what the reader called “an impromptu hurdles session”. In this case, the individual – an avid triathlete and runner – was able to jump over the flying display without injury. She is one of six known customers that have had the unit breakaway mid-run. Some have suffered minor injuries as a result, according to the CPSC. In total, 18 Tread customers in the US, Canada, and the UK have had issues with loosening displays, of which the aforementioned 6 units had the display separate entirely mid-workout.

Rebecca Gardiner of Ontario, Canada ordered her Tread the day it was launched in Canada, on February 9th. It arrived a week later on February 16th. It was 3 weeks later on March 9th that it fell off mid-workout. She had just completed a 45-minute run session with instructor Selena Samuela. As you can see, that went without incident:

After completing that workout she started a 10-minute cooldown run, also with Selena Samuela. That run lasted less than 30 seconds. Out of the middle of nowhere the screen started to wobble. She thought to herself “Oh the screen does move like the one on the bike” (which is true), and a split second – the screen completed her train of thought and separated from the treadmill. You can see the workout record below, at least as much as the screen (which also acts as the computer) killed itself.

With the display no longer attached, it fell downwards, hitting the belt, and then traveled with the Tread belt ultimately resting against the wall behind the treadmill. Rebecca had to hurdle the display as part of that, but, was uninjured. Here’s a photo of the Peloton Tread, its decapitated display, and the location of the treadmill during the incident. She moved the display in front of the treadmill in order to make it more visible in a photo: 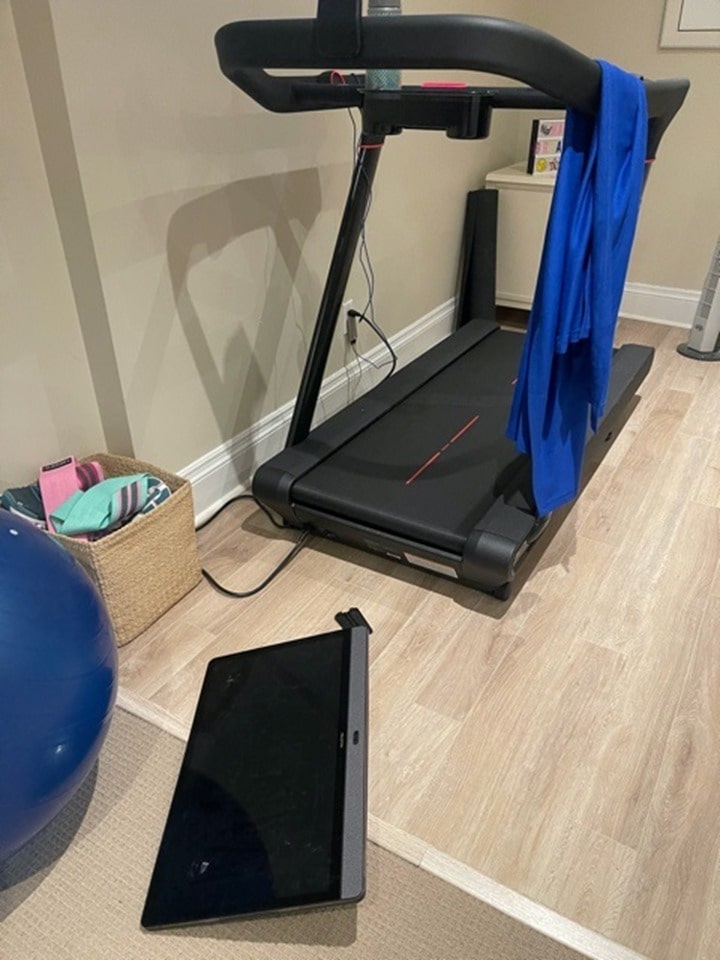 Here, the Peloton Tread with its front having fallen off: 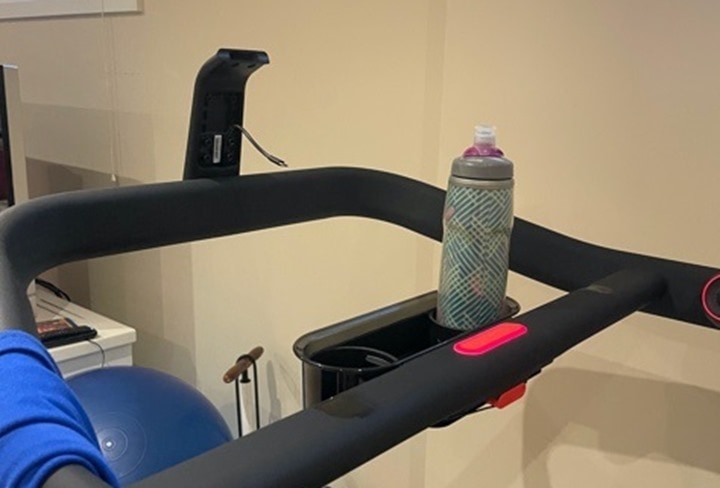 It would turn out, her hurdling session wouldn’t be the only hoops she’d have to jump through with Peloton. 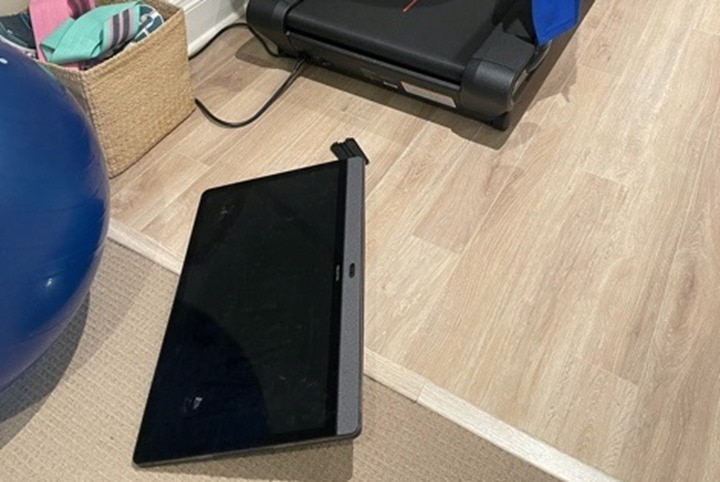 She called support, where she spent hours being passed around without any real resolution. She said that it was clear Peloton didn’t seem to know how to handle it. Peloton refused to book a technician to come fix the Tread, but said someone would call “by the end of the week”. A week later, nobody had contacted her from Peloton.

She called back again and spent a few more hours on the phone being passed around. Ultimately, Peloton decided to simply send her a new screen and told her to install it herself. They sent her the service videos that Peloton has for their own on-site support technicians and essentially said ‘good luck’. Here’s the support e-mail with the instructions on how to install it: 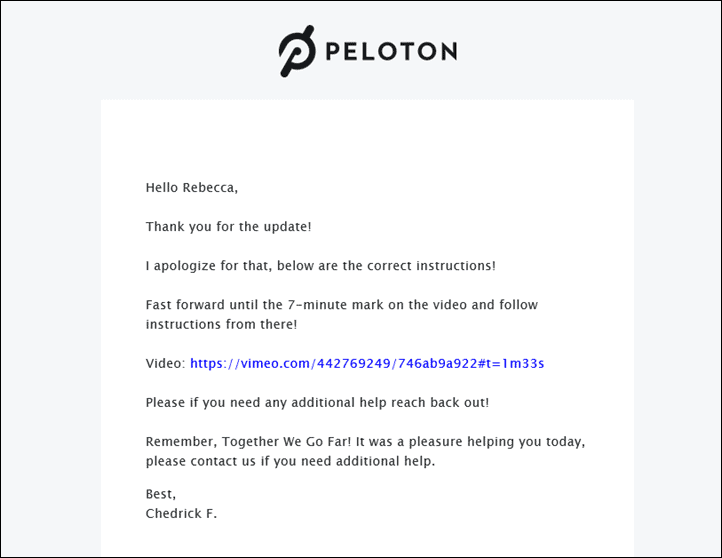 The instructions state to have two people install it together, along with a torque wrench: 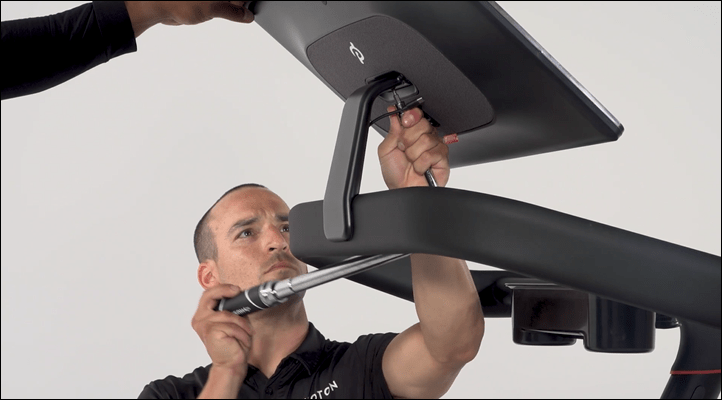 Neither requirement is huge, but notable that only two screws are used to attach the heavy display to the treadmill handlebar frame: 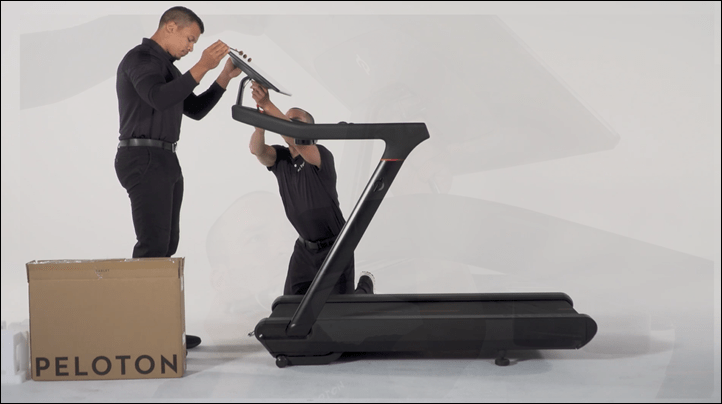 Two days later (Mar 17th), the display arrives via FedEx. Rebecca attaches it, but it doesn’t power on. She contacts customer service again. This time they agree to a technician coming out 11 days later – on March 28th. She’s now lost three weeks of usage.

The technician (singular) arrives and fixes the problem, which was due to the wrong socket being used during re-installation. While the solution was quick, the technician noted (paraphrased) to the customer that ‘while the handlebar part of the treadmill looks pretty it isn’t that sturdy’, and that she should ‘check the screws on the display’ every other week to ensure a repeat incident doesn’t occur. There was no special attention paid to her case from Peloton support, Peloton corporate headquarters, or any other Peloton entity. In their mind, the situation with a few new screws was resolved.

From there until May 5th (yesterday, the day of the recall), Rebecca used the treadmill without incident. However, that morning at 9:30 AM when she went to use the Peloton Tread yesterday, it would not start.

She contacts Peloton via a 45-minute long chat support who walks her through a hard reboot of the machine, which seems to fix the issue. Whether or not it’s tied to the recall isn’t clear. After getting it going again, she asks what she should do, or if Peloton is offering any compensation for people willing to wait.  She isn’t given any options. Concurrently, she was also waiting on hold via phone, to find out about scheduling a repair or a refund.

Ultimately, she’s offered to wait for a repair, or opt for a refund. She tells support that she’ll take the refund, given that she’s “played this game before”. An appointment is booked for next Wednesday, May 12th, for Peloton to retrieve the treadmill in the meantime.

Peloton has stated in their FAQ page they hope to have a solution/fix for the Peloton Tread owners in the coming weeks, likely some form of hardware bracket enforcement. Note that they did not offer this to this customer, simply offering a refund, or a repair at an unknown time.

“Peloton is implementing a voluntary recall for the Tread in cooperation with the CPSC. We are already working to develop a repair for your Tread touchscreen console and hope that this CPSC-approved repair will be available soon. Until this repair is available, Tread owners can either wait for the repair to be approved in the coming weeks, or they can request a full refund.”

You would think the story would end here, but it does not.

As part of the hardware refund process they automatically canceled her and her family’s Peloton accounts and memberships. This came as a surprise to her, as she and her daughters had planned to continue using the digital app until she could order one. Peloton then offered for her to continue using the platform at $13/month. 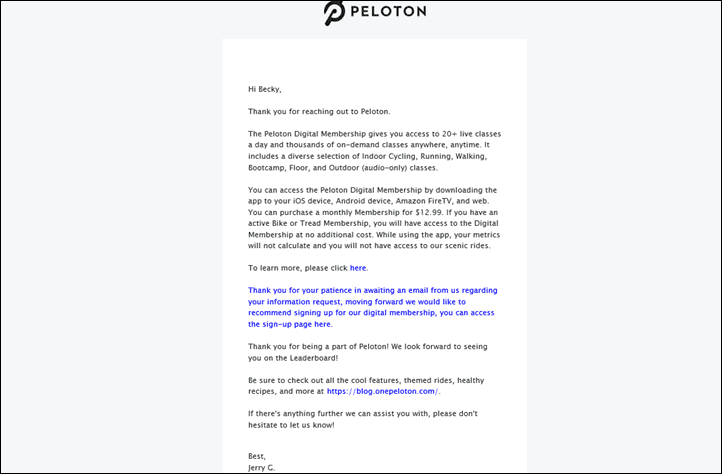 She replied back to that support e-mail noting that this felt like a “slap in the face” given the dozens of hours she has spent with Peloton support, the weeks without a functional treadmill, and all ignoring that she was one of only six members to join the Peloton Hurdlers Club.

Shortly thereafter, Peloton sent a template subscription renewal e-mail that seemed to imply that her membership has been renewed without charge, but she’s received no communication if that’s the case or not (or for how long).

At no point during this entire process has Peloton reached out to her in any capacity. She’s initiated every exchange, and always had to wait hours on the phone, or long chat sessions, to get assistance. Despite all this, she says she’ll be back to purchase another one, saying:

“The bummer of it all is that when it worked, I really liked the treadmill. The classes were great and made running inside WAY less boring. It also motivated my daughters who can be hard to get moving at times. And, believe it or not, if they fix the problems I would really like to buy another one.  Just might wait a while – have learnt my lesson on being a first mover!”

She just wished Peloton would have had better support, and would simply reach out to her and others that actually had the issue with something more than a boilerplate response. Given Peloton has re-considered many treadmill decisions as of late, perhaps they’ll re-consider this one too.

(I reached out to Peloton’s PR department for clarification on what, if anything they were doing to more directly contact/support those with broken treadmills. But they have not yet responded.)