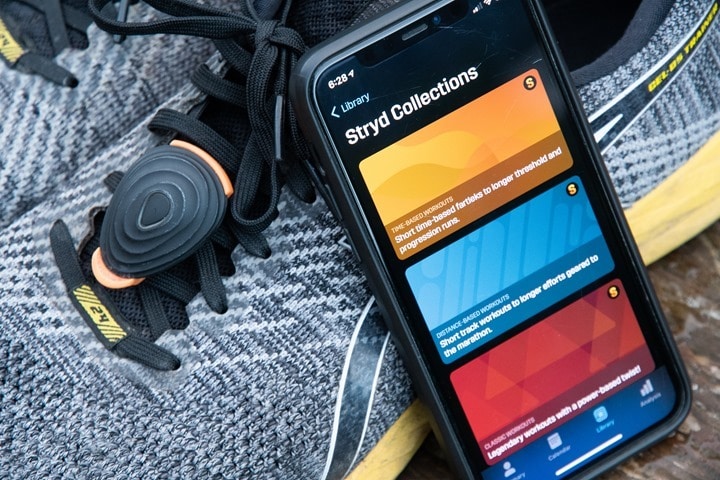 Last fall Stryd announced their intention to add a subscription-based service to their offerings, in conjunction with their existing Stryd running pod. That pod provides running power (as well as acting as an ANT+ & Bluetooth Smart footpod). The pod is compatible with most watches today from Garmin to COROS to Suunto and Polar. They’ve even got an Apple Watch app, and I was also able to get it cookin’ on the Wahoo RIVAL last fall. The exact running power feature-set varies wildly though between each of those watchmakers – a fact that likely slowed Stryd’s long-term growth.

Back when they announced the subscription service, they noted that existing users would get to keep existing functionality, and that the new subscription service would largely be composed of new functionality – primarily in the structured training and race prep realms. Meaning you don’t need their subscription service to use the Stryd pod. In addition to their announcement back then, they’ve been launching various features in beta over the last 6 or so months, giving you a taste of that beverage before a price tag is attached to it.

As of today, they’ve flicked that switch and the price tag is here: $9/month

However, they’ve also lowered the cost of Stryd to $149 (from $219), *IF* you agree to a 6-month subscription (thus, another $54). So even in that scenario you’re saving yourself $16 (and you get 6-months of subscription included). You can still however buy just the pod for $219, if you’re like me and suck at forgetting to cancel memberships later on.

Further, existing Stryd owners can get a 6-month subscription for $19. And those that have been testing it since this past October can continue to do so till May 6th before they’ll have to pay. And lastly, there’s also ‘per-season’ pricing, which is akin to a 3-4 month plan up to a given race.

First though, let’s talk about what’s new, what’s changing, and then I’ll dive into some general thoughts. 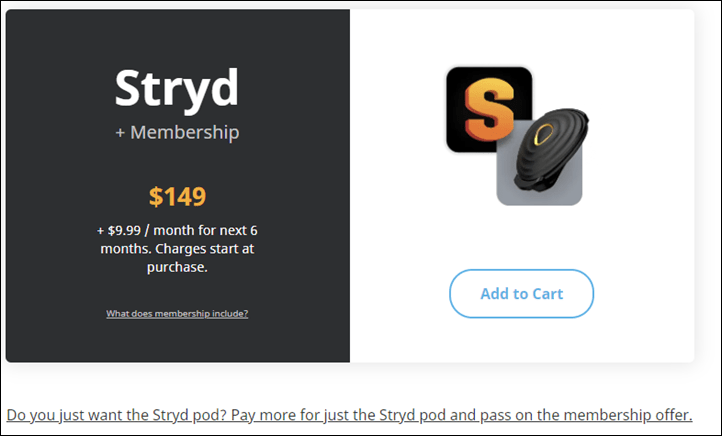 The best way to think of it is if you just want to use the Stryd pod to gather data, perhaps transmit it to your watch/app, and look at the totals – then the existing free account will continue to do that just fine. Whereas if you want to have a running-power focused training plan, create a race-day plan based on running power, or do deeper analytics, then you’ll need a subscription. This subscription basically has the following main core features:

Training Plans: This includes both base building plans and personalized training plans based on your data.

Workout Builder: The ability to make structured workouts for running power, and then push it to supported devices (Apple Watch & certain Garmin watches only)

Workout Library & Workout Collections: If making your own one-off workouts isn’t your thing, this is a pile of pre-defined ones that you can use ad-hoc. This differs from a plan in that a plan typically is months of workouts, whereas this is just like pulling out frozen pizza from your freezer – a one-off thing ready to go without context.

Analytics bits: This includes Running Stress Balance, Race Pace Calculator, Training Distribution, Running Trends, and Workout Breakdown. It also includes personalized workout recommendations based on your data. In other words, all these things take your existing data and spit out advice or recommendations. One could bulletize all these individually, but I think a single bucket here makes sense.

Now, at this point some of you long-time Stryd users are like “Wait just a sec, wasn’t Race Pace Calculator, Running Stress Balance and a few others previously free?”. To which was my same question, and the answer is yes – it was. And it still is, at least if you had an account created prior to today with data in it. Then you’ll continue to get that for free. For everyone else, show me…err…them…the money.

Here’s an entire chart that shows all the features:

Basically, those blue ‘P’ icons mean that if you have a Stryd account prior to today (April 6th, 2021), then you get to keep those features. If you’re buying a Stryd from today onwards with a new account, then you’ll need to pay for those features.

By and large, the main thing the Stryd subscription is trying to do is to be a one-stop shop for power-focused run training, either on the plan side or the analytics side. While there have been scattered efforts at running power training plans by various services, most running training plans aren’t focused on running power. There are arguably many reasons for that, including lack of user uptake in running power, lack of ability to use running power plans natively on Garmin devices, accuracy concerns across multiple athletes with differing running power sensors/systems, etc…. However, at the end of the day, Stryd is basically sidestepping that entire conversation and saying “Look, if you have our device, use our platform end to end”.

So let’s take a look at the training plan system real quick. First up, I’m going to enter a fictional 10KM race on July 4th. The builder has offerings of 5K/10K/Half—Marathon/Marathon plans, plus base and intro options. I’m choosing 10KM, because frankly there’s no races scheduled anytime soon. Thus, this will work. Also, as a supposed triathlete, I balance multiple sports, so it’s not quite ideal here because I’m effectively pretending to only give it a portion of my actual workout time. So I give it the minimum it allows – 4 days, and then try and give it 5 hours. It ends up only wanting 4 hours (or 5 days + 5 hours). Here’s the workflow:

Once that’s done, it spits back a plan that shows a calendar view, and you can also see the workouts scrolling through, starting with April 12th. The problem here, as is immediately obvious, is these are frankly too silly easy. My critical power is set correctly-ish at 328w, but it spits out a long run of a mere 4-miles with 10-minute miles. Even metric-focused folks would know that’s not really viable for giving me a fast 10K race (at least, based on what I want).

Basically, right now the Stryd distance is merely an estimate. So the workout is time-based, but the distance just a swag (and by the looks of it, a really bad swag). So that 4.07-mile run is probably going to be about 5ish miles in reality, given the Critical Power (CP). Or, maybe not. It’s hard to say though. The second challenge is that the first month of every plan is basically base-building. So it’s going to be even lower volume than you’d expect. Stryd says I can slide forward my race date artificially to compensate for that. Down the road, they may have other solutions there.

This issue aside, we can tap on any given workout to see the definition of a given workout, including the narrative behind it and the exact power zone targets for each section:

If I wanted to, I could tweak any part of this – though realistically you’re not likely to want to do that within a training plan – but rather do it for one-off workouts from the workout builder or workout library.

Speaking of that workout library, there’s a pile of different categories within that, you can see them below:

Once you go into a category, there are between 2 and 8 or so workouts in each collection. I like the collection concept, and in particular, the descriptive bits below each one. The idea with all these workouts in the library is that you can just take one out when you need it, and use it.

You can save it to your calendar, or even use it as a template to tweak yourself. For example, I took the 400’s above, and tweaked it to be 8×800’s instead.

The one challenge here, and with the workout builder, is figuring out exact pacing. While the theory behind power training (across any sport) is de-coupling pace/speed. Except, it would be handy to know what it estimates the splits will be for each interval using an assumed CP and no-wind. After all, it’s calculating this already at the top of every workout showing the total workout time and distance. Time can only be calculated by knowing pace. A minor thing, but it would be handy to be able to napkin math whether or not a workout from the workout library is what you’re looking for – especially for folks not super intimate with their CP numbers and power duration curves yet.

In any event, once all that’s said and done, you can open it on an Apple Watch or Garmin Connect IQ 3.0 or above watch. You’ll see each step along the way as with most structured workout systems: 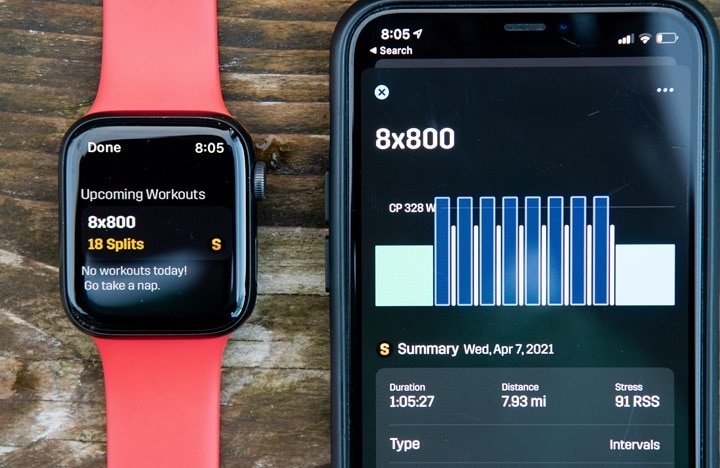 Overall, the flexibility here is pretty good if you’re purely focused on running power. Where it gets messier is if you need to use pace for something. Which, I know, doesn’t really fit into the ‘Running power is everything’ scheme, but there are legit reasons why you might want to see the HR impacts for example, of a given set of intervals at a given pace. Currently, the only way to build workouts is on power levels or perceived effort. You can’t do it at target pace. Undoubtedly, that’s more of a philosophy thing, but if RPE is an option, then pace targets should be too.

Since this isn’t a review, I’m not going to dive into every single feature here. For example, the Analytics ones require more data than is in my account today. I have good data when my Stryd battery is charged (since it just records quietly in the background on my Garmin), but when the battery dies I tend to forget about it until I randomly remember. Turns out, the last time I remembered was mid-February with a smattering of snowy runs.

Thus, those analytics are somewhat skewed as a result. But, I’ve charged it back up, so will start collecting data again. 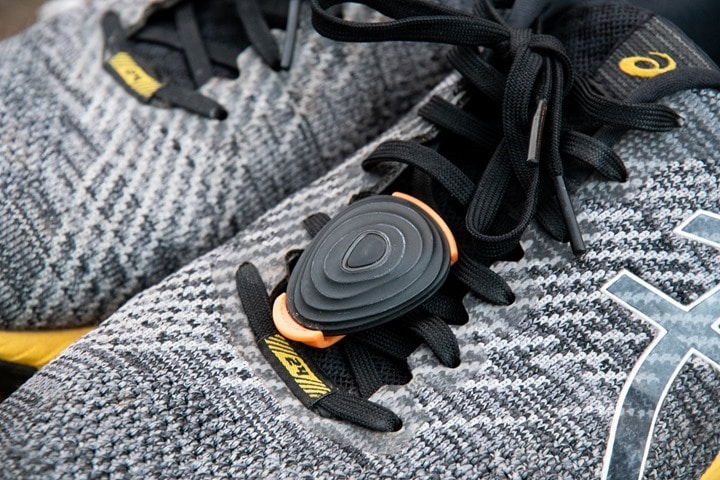 As a starting point for a subscription offering, I think Stryd actually has pulled together enough features to warrant a paid offering, primarily with the inclusion of the running-power focused training plans. As noted earlier, there’s not a ton of ready-made plans out there (though, there are some free ones – ironically on Stryd’s own page within TrainingPeaks). There are also training and racing with running power books too – for those that want to dig into it more themselves. But in terms of something fully integrated across multiple watch vendors, that’s fairly slim territory. So what Stryd has packaged together seems like a fair collection.

I also think that Stryd has done a relatively good job of not ripping out existing features from existing users. What folks had pre-announcement last October remains, and people that are using the subscription features in free beta can continue to do so for another month.

However, as I have often noted with Stryd over the years – the price is still going to be challenging for many people, and this subscription service somewhat follows the same trend. At $9/month, we’re in the same realm as deep training analytics platforms like TrainingPeaks (without plans), or the cost of a running power plan using Final Surge (which is free as a platform, and with far deeper analytics too). Of course, with Stryd you’re paying for the simplicity of it all in one app and one place – so there’s undoubtedly a benefit there. Still, I think $5/month is probably more in line with people’s expectations…given they still have to purchase a $150-$220 device. Just my two cents.

Ultimately, it’ll be interesting to see where things go over the next year. Stryd says that they have features in the hopper they want to release, mostly to subscribers, but also other data-driven ideas for non-subscribers. I’d also think that having some of those plans target triathletes would also make sense, because I suspect there’s an above-average number of running power users (Stryd or otherwise) in the triathlon realm, which tends to skew more towards data and tech.