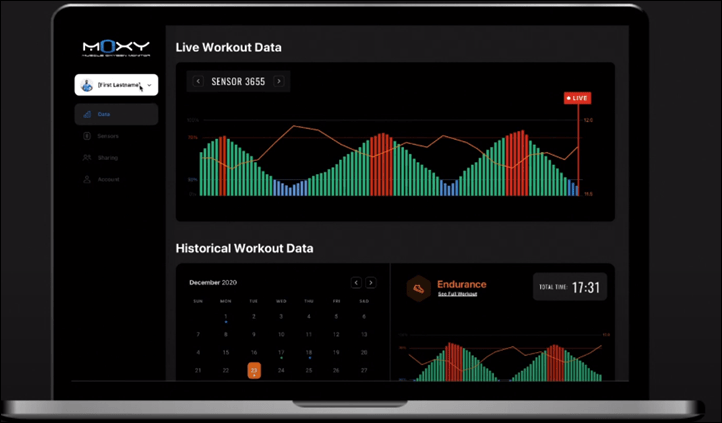 If you’ve been around the endurance sports tech scene long enough, you’ll know that Moxy has been around this connected sphere longer than most – even if you didn’t quite understand exactly what their product does, or how best to utilize it in training. They’ve been a bit of the stable hand in the muscle oxygen saturation monitoring game over the years as various other companies have come and gone (including BSX, and more recently Humon Hex). Of course, they’ve also been the most expensive option.

However, up until now, using a Moxy device to monitor your muscle oxygenation largely required some other device or app to analyze that data (either in real-time or afterwards). Today’s Kickstarter aims to change that. Now, before I lose you to boredom – just one teaser: This Kickstarter gets you a new Moxy device for cheaper than they’ve ever sold it before – plus access to the platform they’re pitching. Meaning, you basically come out a winner if all you wanted was the device. But let’s not get distracted.

Today Moxy is launching their Moxy Portal, which is a combination of both an app and a web platform. The app acts as a real-time monitor for the device, while the web platform is both a place you can analyze workouts (including in real-time), but also where 3rd parties can link-up via API. Basically, Moxy is making all this glue, versus previously they were fully dependent on devices like a Garmin watch. That worked fine and was often used in demos from Garmin at developer conferences on how to leverage the tech (and ultimately was implemented natively on some Garmin devices as well as Wahoo devices). But as Moxy saw growth in non-running/cycling sports (namely, cross-training), they found most of those users didn’t have a Garmin watch.

Now, before people get all worked up about pricing – keep in mind this device is mostly aimed at elite athletes and their coaches. Meaning that while many consumers did get into the muscle oxygen game via BSX & Humon Hex, the pricing realities here make this less appealing for more casual athletes. Athletes use these types of devices to get more granular data on how their muscles are responding to a very specific load, by measuring at the actual muscle (versus measuring via proxy, like heart rate, which is more laggy). It’s both a more finite way as well as a more complicated way of tracking structured workouts – hence why it tends to be used more by elite coaches than regular users. BSX & Humon Hex attempted to change that game by simplifying it, but ultimately Humon couldn’t make it work financially with less expensive devices. While BSX got distracted making faked Kickstarter updates for a product that didn’t exist.

In any case, I got a bit of a quick walk-through of the platform. So I’m going to briefly cover some key points.

First up is that this entire platform requires a Moxy 5 or newer unit, which are basically Moxy units made after mid-2018. The reason for that is that those units have Bluetooth Smart on them, which is how the app connects. Moxy isn’t launching a new piece of hardware today, but instead giving people a steal of a price on buying the Moxy units (or even trading in old Moxy and non-Moxy units).

The next notable is that while the platform *looks* impressive, at present, it’s largely mock-ups of the final design. Which, is kinda the norm for Kickstarter projects. They have already begun on elements of it, but the final styling may not match what is seen in the screenshots or videos. Some of their midrange Kickstarter rewards attempt to mitigate some of this by also giving a full training course from Evan Peikon that they normally sell for $300 via their Moxy Academy.

Anyway, with those notables out of the way, let’s talk what it all is. Their platform starts at the mobile app, which pairs up to three Moxy units concurrently, plus one heart rate strap. Again, this is the reason/need for the newer Moxy units that have Bluetooth Smart. You can see the assignment of the sensor location below. 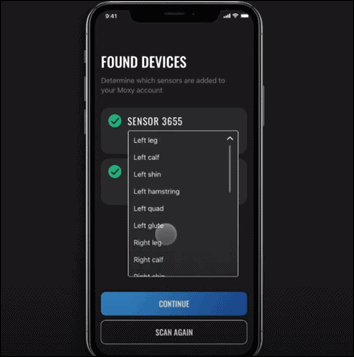 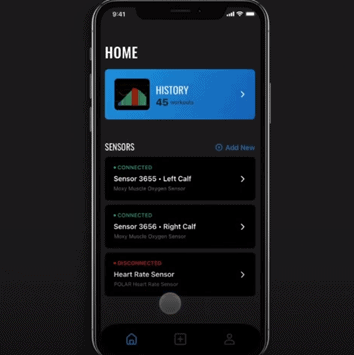 Within the app you can record workouts, but also do structured workouts. Remember that since the Moxy is focused on training to specific muscle oxygen levels, it’s less focused on elements beyond that (which might be sport-specific). In this case, Moxy is including three workout groups (strength, endurance, and interval), and then also a free-workout mode when you just want to capture data, but not be guided. 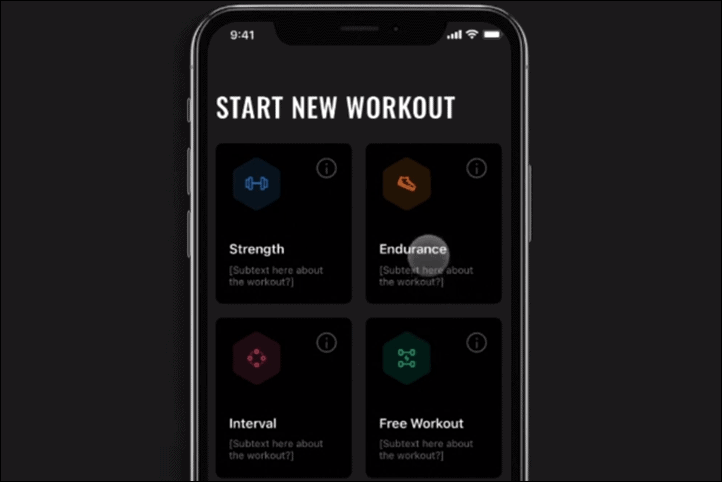 Once in a workout, you’ll see the time and duration of the intervals/workout, as well as the current oxygenation status (SmO2 and THb) for each sensor. The chart below is color-coded, but the coding isn’t zones, rather whether the oxygenation is increasing or decreasing. The main thing Moxy is going for here is simplicity. They noted that they didn’t want people fumbling around when in a hard interval or lifting weights. 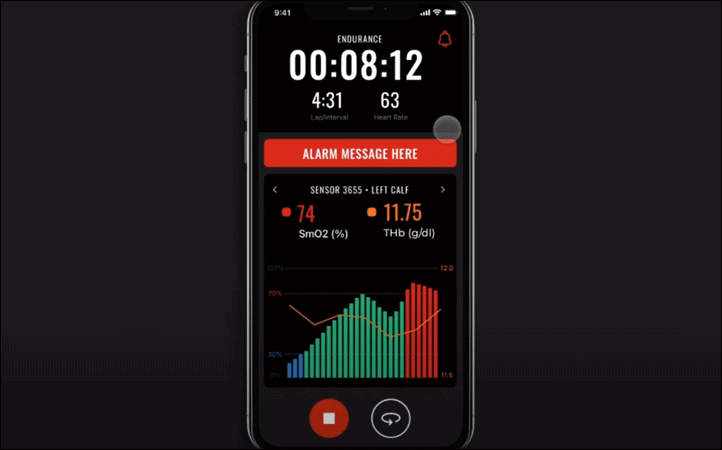 All of this data then gets pushed live to their web platform. Live being the interesting part, especially in an age where athletes and coaches often can’t be in the same spot. A coach could open a Skype/Zoom/whatever call while live-coaching the athlete with the data on the screen coming from Moxy. 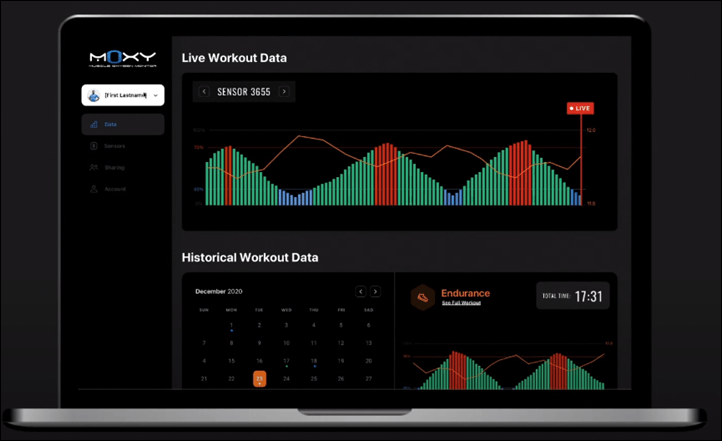 The coach can change the athlete using the usernames at left, after linked up to that athlete (authorized by the athlete). 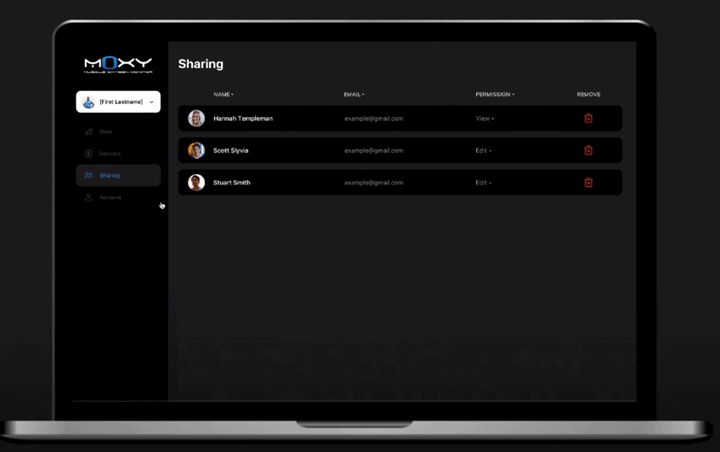 Users (and coaches) can dive into previous workouts, and the data from them. They can change the amount of data shown, and how it’s presented in terms of graphing styles. 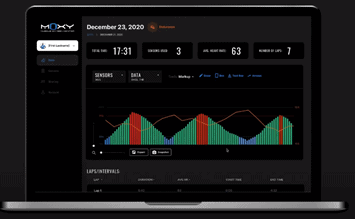 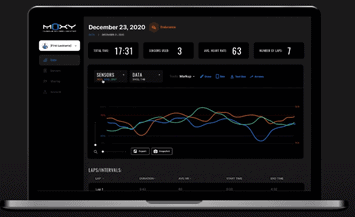 Interestingly – they plan to allow markup atop the graphs to send to athletes (as in, drawing on it, adding text boxes and such). Why on earth don’t other training platforms allow that? Seriously – do you know how many workout comments I’ve had marked up using random tools from a coach? Why not have that built-in? Seems logical. 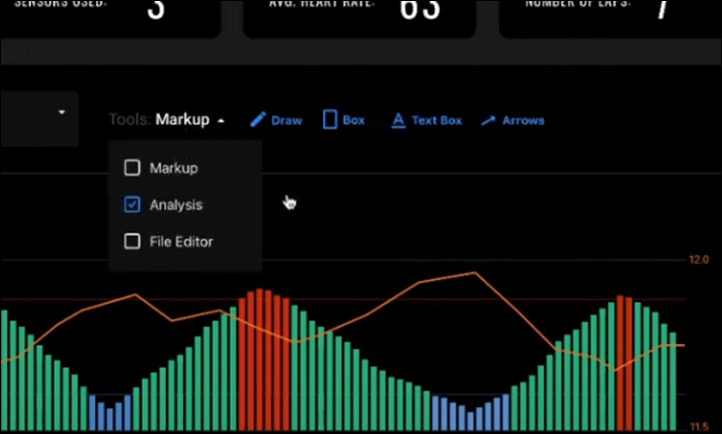 The platform allows for the athlete to export in both .FIT format as well as .CSV files. Most sports/fitness applications will use .FIT, while more researchers tend to gravitate towards .CSV files.

However, medium to longer-term they’ll aim to get it linked up to 3rd party platforms. Specifically, they’d like to have your Garmin workouts sync to it (so they can merge if they want to, kinda like Stryd does), and then also push out files as well to platforms like TrainingPeaks. 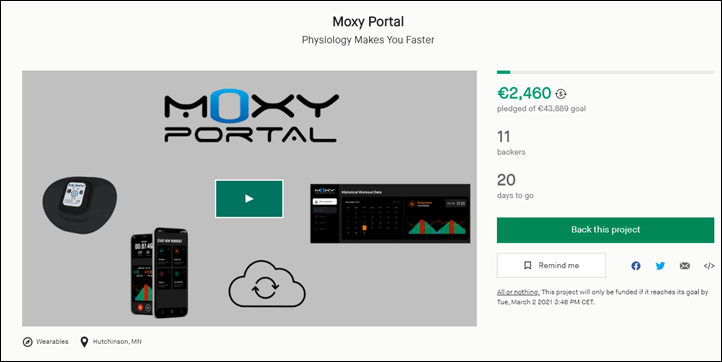 Now again, some caveats: This is Kickstarter. It’s not a store. There’s no guarantees. You might end up with nothing.

With that caveat, this is a bit different than a normal Kickstarter. In fact, I’ve never seen anything like this in all my years. Unlike normal Kickstarters, this company already has half of what you’re potentially buying (the sensor). Whereas they don’t yet have the app/platform built. The app/platform is slated to be finished in June of this year. However, your sensor will ship on April 15th of this year – a touch over two months away. So in some ways, even if the platform is delayed (or worse), you’ll still have your fully functional Moxy device (which has zero dependencies on the platform itself).

Moxy has a slew of Kickstarter award levels. Note that normally a regular Moxy costs $819. Here’s the simplified version:

Got all that? Good. Next, some timelines. These are all pretty self-explanatory, though, I was impressed to see scheduled backer Zoom calls. Seriously – I’ve never seen that before in any Kickstarter campaign. Kinda neat. 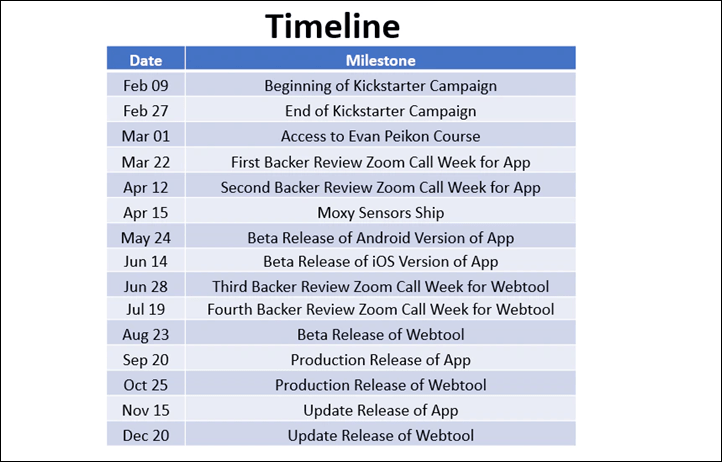 The Kickstarter closes Feb 27th, and as usual with Kickstarter, if they don’t reach the funding goal – then nothing gets funded and you get your money back. If they do reach it, then upon completion that kicks into motion all of the above.

The exact pricing for what the platform would be for non-Kickstarter folks isn’t yet decided (Kickstarter backers get a permanent subscription with no further fees). Moxy says they’ll likely offer both a monthly and one-time cost option, but again, haven’t finalized that piece yet. Ultimately though, I suspect the bulk of their Kickstarter backers will probably come from coaches/labs that would have bought a Moxy anyway, and this is simply cheaper with more benefits. Kinda a no-brainer for them.

(And again, one last warning that Kickstarter is not a store, and like life or eating airplane food – there are no guarantees.)