Garmin Launches Clipboard App For Coaches: Here’s how it works 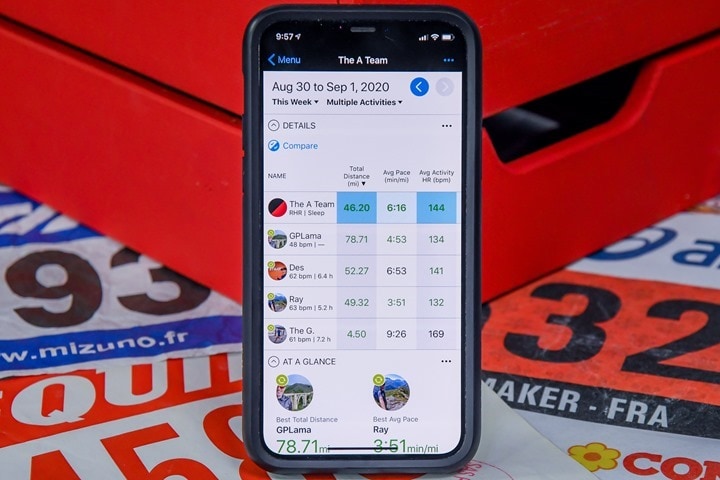 Garmin has dipped its toes into the coaching platform realm with the release of a new app today, called Garmin Clipboard. This app allows coaches, teams, organizations, and other athletic groups of socially distant people to have both their workouts, as well as daily sleep/stress metrics, consolidated into a single view. A TrainingPeaks competitor today, this is not…at least for now.

Instead, this most targets a much simpler goal: High school and college athletics departments, where a given coach/sport will purchase a pile of identical units for a team to use. It’s an area that Polar has played in for decades (no kidding), notably both on software and hardware. And while Garmin has long had an educational group within the company that caters to that realm, they haven’t really had any cohesive app story to go along with it. Compared to Polar, which leads with their team app solution (though, you’ve likely never used it unless you were on a team with it).

Now, while I’m certainly no coach, I can play one on TV. And so in this case I got the app all installed, enrolled a few familiar faces as my athletes, and got to work. Here’s what things look like.

Because this is a Garmin app, it is restricted to data only from Garmin devices. But there’s no limitation on how old the device is. As long as it uploads to Garmin Connect (which, is basically any Garmin fitness/outdoors device ever), then you’re good to go. As I’ll dive into more later, in the context of how this is positioned (as a team solution), this limitation isn’t a big deal today. Longer-term it’ll matter though. Again, more on that later.

The first thing to do was download the new app from the app store. It’s currently just on iOS. Once installed you’ll create yourself an organization. Don’t worry, you can change it later, as I did about 12 times. Also, you’ll add a picture and choose two colors for the club.

An example of that hierarchy would be:

In any case, I created a team (Team Awesome) and sub-team (The A Team) and assigned a sport to it. At the end of which it’ll give you this QR code page. This is what allows you to invite someone. You can also send them a URL as well, which is a join URL.

The QR code is clever as it makes it easier for a coach standing on the side of the track to show it to an athlete who scans it on their phone. From there it redirects to a website where the athlete authorizes their Garmin Connect account to share information with the coach. It explicitly requires you approve the stress and sleep tracking data separately from the rest of your workout data:

As part of that (as an athlete), you’ll choose the name your coach will see (which is where athletes should simply type ‘Greatest’), as well as the picture of the athlete.

Once that’s done, there’s nothing more for the athlete to do. The rest is purely on the coaching side. So here’s the main dashboard. You can see my organization name up top, and then the sports/teams/athletes listed down below. There’s also some settings up in the corner:

If I crack open ‘Team Awesome’ settings, I can add more teams, add athletes, and remove athletes. For example, if Des is slacking, he’ll get kicked off the team. I can also see which data types each athlete has approved:

Opening up ‘The A Team’ (I realize my naming is confusing. #SorryNotSorry, being awesome isn’t easy), you can see all the athletes and averages across the time period specified at the top. You can change the time period as well.

If I swipe right I can see the various metrics, and also customize them up above. And as you’re probably noticing, the metrics are a bit quirky. For example, there’s currently a bug (set to be fixed shortly) that cycling activities don’t get their speeds filtered out from the running paces.  So in the case of Des/GPLama/myself, our only workouts to date this week are cycling, whereas The Girl’s only workout this week (it’s Tuesday morning) is running. It also doesn’t help her that the three of us are dual/triplicate recording our workouts on Garmin devices for testing, inflating our numbers.

Also, it only shows ‘activity steps’ (so those from workouts), and not 24×7 steps. Thus since only The Girl has done a run this week to date, she’s the only one that has activity steps.

There’s also the ability to see ‘At a glance’ type metrics, which can be slightly customized. I found it funny there’s a ‘Worst Avg Sleep’ option, but no ‘Best Avg Sleep’ option. But one way or another, at least I won the sleep category!

Below that are team graphs, which again, you can customize a fair bit. These are plotted against the same timeframes as above, and allows us to see that I’m the fastest, and The Girl works the hardest.

I can then tap a given athlete, and get data from them, including their calendar (at least back to mid-August, where it looks like the data feed is truncated).

I can tap any given activity and look at some high-level metrics there, but honestly not anywhere near the depth of what you see in Garmin Connect Mobile. For example, you won’t see location details (like GPS tracks), or honestly most other metrics besides average pace/HR/speed/elevation/time. You can see lap data though, such as this track workout I did last week:

Also, you can do quick comparisons between athletes on piles of metrics. For example here is distance between Des & GPLAMA, and then resting HR and activity HR between the two of them.

There are some nuances to be aware of. For example, two nights ago I didn’t wear the Garmin watch to bed or even during the day, as such the ‘lowest’ HR it had for the day was just my workout and time shortly before/after (I was testing other things). Last night I wore it to bed, and got a normal lower HR. But it’ll average those for the time-scale above. So for athletes that might not wear their watch 24×7, some of the metrics may be confusing to a coach. But that’s something they’ll have to sort out themselves.

Lastly, our Team is too awesome to do a team workout together. We dance to our own music. Also, it doesn’t help that we’re on three different continents. But had we done one together, you can actually analyze that as a single cohesive thing. Here’s some screenshots from Garmin on how that looks, as well as how an inferior team looks that only runs with one watch apparently. Amateurs. 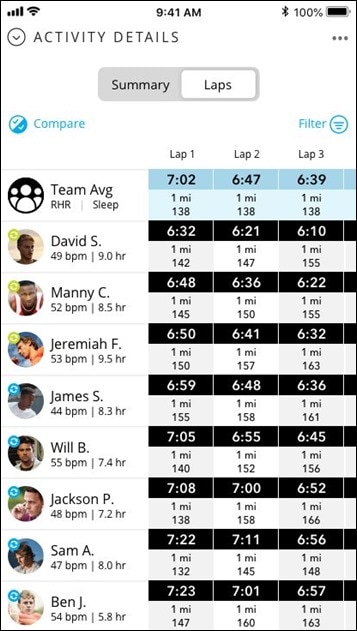 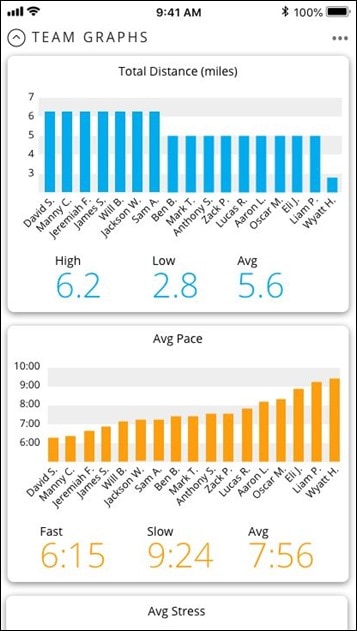 Finally, note there’s no communication within the app itself. Meaning, you can’t send a note to an athlete. Nor does it have a link to the full activity details over on Garmin Connect Mobile (which, would be ideal).

The challenge with coaches is they’re fickle, demanding, and varied. Which, is *exactly* why athletes have used coaches in athletics for hundreds of years. Coaches use their experience to drive their coaching styles, and with those coaching styles comes nearly unlimited demands and requests on the coaching platforms they use. This manifests itself in feature requests so particular, so painstakingly specific, and so difficult to scale. It’s why coaches rarely switch between platforms once settled. The challenge of not only moving their entire group of athletes to a new platform (along with history), but also all the features “they need”.

Which isn’t a slight on coaches. In fact, it’s these nuances of coaches that make them valuable. That it’s not just an algorithm, but rather a unique style and theory that’s different from person to person. It’s why an athlete can excel under one coach, and flounder under a different coach.

But when it comes to programmatically pulling off a coaching platform, it’s incredibly difficult. Even for a single sport. At the coaching platform pyramid we’ve got TrainingPeaks as the undeniable behemoth. Behind them there’s Today’s Plan, Final Surge, INSCYD, and countless others you’ve likely never heard of.

Garmin’s focusing mostly on the educational side of things makes a ton of sense. Schools tend to want to purchase an entire package that’s ready to roll. It’s why Polar has done well in the educational/team side of things, at least historically. These days though their team platform is heavily heart rate sensor driven. A natural fit for Polar, but also not as ideal for running, cycling, or other outdoor ‘I’m going somewhere’ type teams utilizing GPS data more and more. Similar, like Polar, the educational side also means Garmin can basically say ‘Everyone is on a Garmin device, else, nothing-burger’.

I asked Garmin about this a bit, and they seemed on the same page there, saying:

“This initial version of the app is targeted towards running coaches at middle schools, high schools and colleges/universities and also coaches of running clubs. Garmin created this free app after realizing more could be done to support coaches and promote running.  We wanted to bring the benefits of wearable technology to all athletes so the coach can better monitor training and more effectively design workouts.”

But having all athletes on Garmin devices is a tactic that simply won’t work if Garmin wants to attract non-team scenarios, such a typical standalone coach that has clients spread around the region/world. It’s as much a non-starter as forgetting to plug in your Tesla. And that’s before we look at the metrics. It’s pretty basic compared to what platforms like TrainingPeaks or Today’s Plan have. My guess is on a feature-basis, it probably has 1% of the features of those platforms. At best. Maybe not even 0.5%. I’m not kidding there either, that’s a pretty realistic guess on the features and nuances of those platforms.

Which lead me to ask whether this was the desired end-state, or simply first steps towards a larger and more in-depth coaching platform, to which the team said: “We will see how this app goes and plan how to proceed from there.  We certainly hope it could be a first step to bigger things!”

Ultimately, ya gotta start somewhere. And this is somewhere. I’d say it’s probably better to judge this book not by today’s cover, but rather the cover next fall. By then that team will either have found their groove (getting beaten over the head by coaches with feature requests), or have given up (also, because they got beaten over the head by coaches). If they’ve found their lane, then we’ll be able to look at the trajectory and see where things are going, and whether or not it’ll compete more heavily elsewhere in the market.