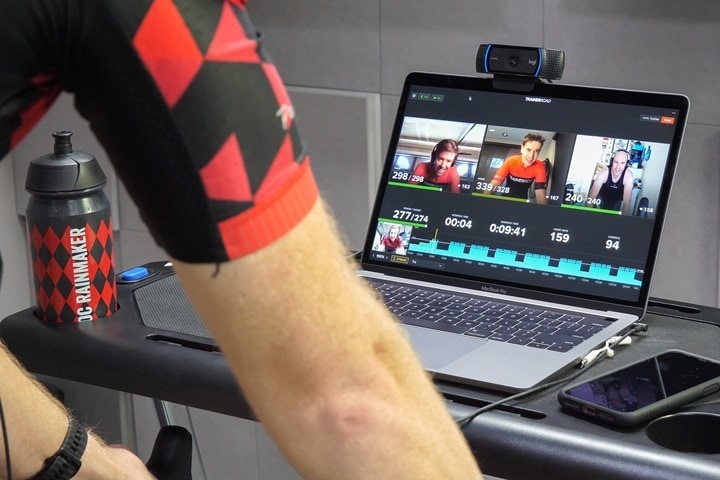 TrainerRoad has launched a new group workout function today that enables you to do a workout with friends synchronized together, complete with audio and video of each of you suffering. It’s like TrainerRoad cobbled up with a little bit of Zoom. While in the workout, each person will have their smart trainers synchronized to hit intervals or other changes at exactly the same time, and then the TrainerRoad app will show your friends’ power targets, actual power, and heart rate too. That combined with the audio/video makes for perfect friendly banter and taunting.

At a high level, what TrainerRoad is doing might not seem terribly ‘new’, but in reality, it actually kinda is. Sure, people have been using 3rd party web conferencing solutions to do group workouts for years (and even more so in recent weeks). And numerous other apps have allowed people to synchronize group workouts or rides together. But no app in the indoor training space that I’m aware of has both of those things together, with the ability to see not just one person – but everyone in the group.

I’ve been using the functionality over the past week, with people scattered on different continents as far away as humanly possible – and it’s worked pretty darn well. If you want the quick overview of it all, hit the play button below. But…if you’re seeing this post in the first hour after it goes live – then swing over to my YouTube channel where I’ve got a live session going on right now.

With that, let’s dig into how everything works.

First up, of course, is updating your TrainerRoad app. Again, this is *only* on Mac or PC, no phone/tablet support at this time (maybe down the road). Once that’s done, you’ll launch it and click on the ‘Group Workouts’ feature. The first thing it’ll ask you to do is confirm your age:

While TrainerRoad already knows your age from your profile, this is essentially a legal step that ensures you’re not a minor trying to livestream yourself. 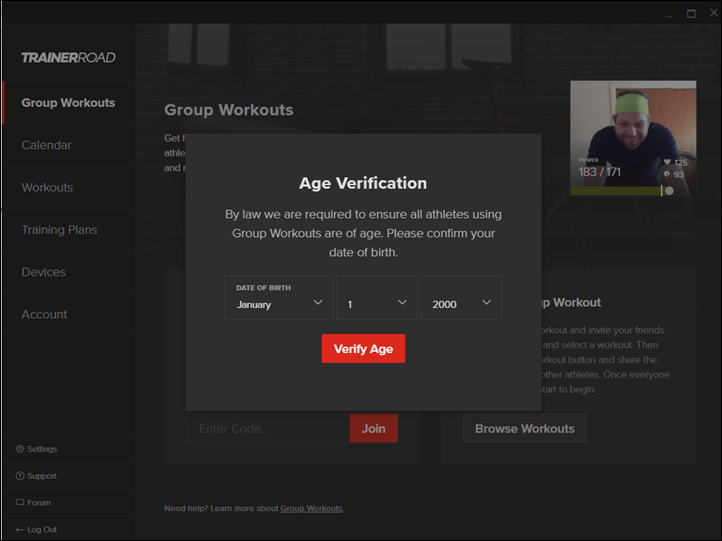 At this point you’ve got two choices:

Pretty straightforward really. With the join functionality, you’ll have to enter in a code – kinda like joining a conference call or Zoom meeting. Whereas with the creation of a new group workout you’ll first pickup the object of pain (specific workout), and then it’ll give you the code. 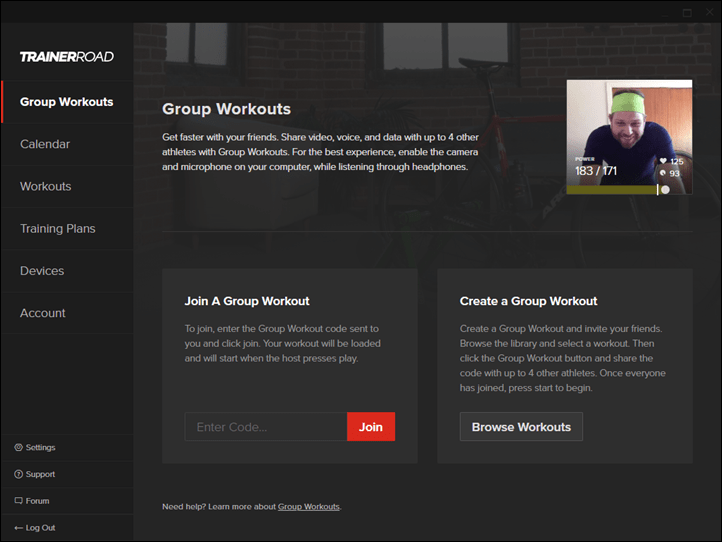 First, I’ll show you creating a group workout. To do that, we’ll tap the ‘Browse Workouts’ button above and then browse all the workouts just like normal. You can filter, select custom or favorite workouts…all the usual stuff [Update: Custom workouts won’t actually work at this time, as it’ll inform you a few steps later]. Once you’ve done that, you’ll see a new option at the bottom that says ‘Create Group Workout’. 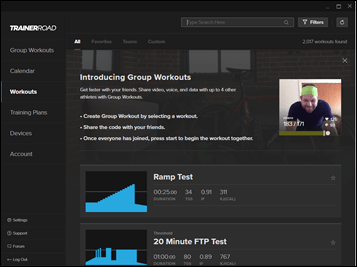 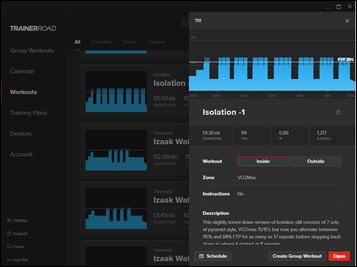 At this point, you’re basically done. You’ll be given a 6-digital alpha-numeric code and then you can copy that to send to people. Or just snap a photo and send it to folks.

For launch today, they’ve limited it to 5 total people (so you + four people). However, TrainerRoad says to expect that to expand quickly. This is basically to ensure that they don’t break the interwebs on Day 0. It’s a non-ideal time right now to break the interwebs. 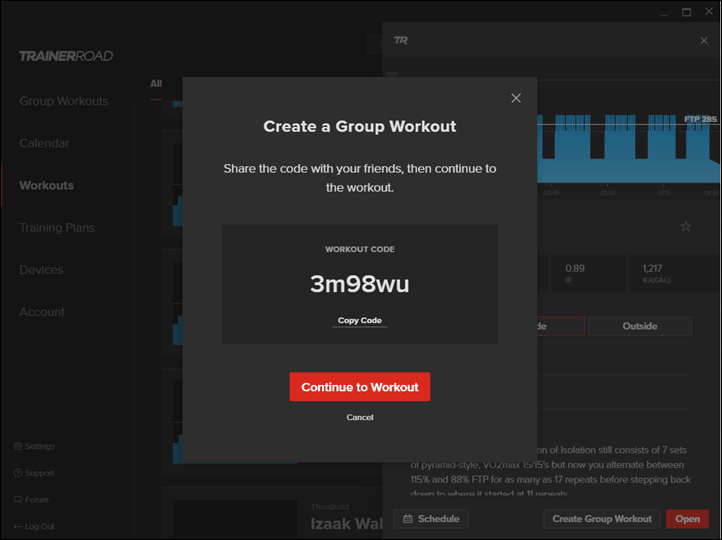 At this point, if you’ve never done group workouts before it’ll give you a little tour. Fear not, we’ll cover all the aspects of the tour as I show you how it works in real-life. 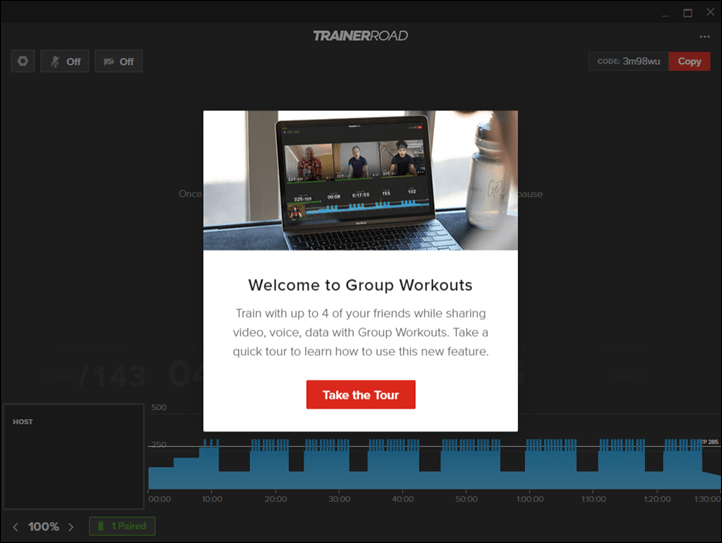 At this point, you’ll see your audio/video controls in the upper left corner.  Hit that settings box to figure out which device you’ll want to use for your mic/speakers/video. It’s recommended to use headphones with a mic in them (most headphones have a mic in them), and I’d agree with that. Whereas if you used your computer’s microphone, it might not sound as good to others. Realistically, you’ll probably need to play around with these a bit with your friends and keep asking ‘Does this sound better?’ until you get one everyone can withstand. 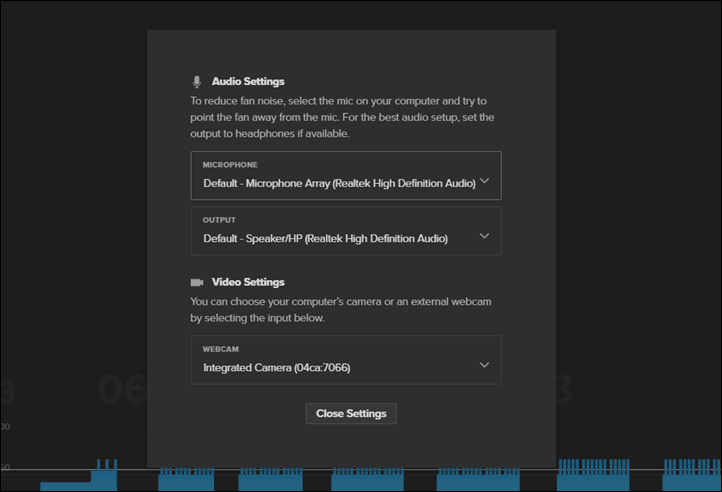 Meanwhile, there’s also two quick-access buttons up top for turning off audio/video streaming to others. This allows you to turn on/off that outbound mic and video streams rapidly, in the event your significant other decides to walk through the room sans-clothes. It doesn’t impact the underlying workout streaming in any way. 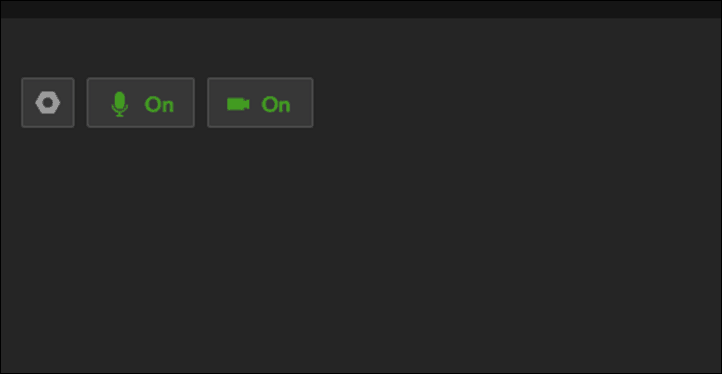 Speaking of that workout, you’ll see that down below. Note that the app won’t show any instructional text that’s normally in workouts (at least not at this time). So that’s skipped for now. It’s just you and the blue blocks, baby.

You’ve got the usual controls in the lower corner for device pairings for your smart trainer or sensors. Plus also the intensity changer, in case things aren’t going too smoothly and you need to dial it back (or perhaps increase it). 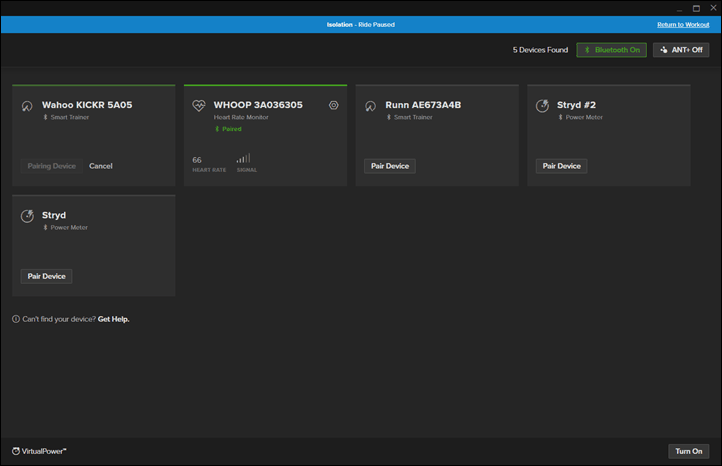 Once all your friends pop-up, your partial Brady Bunch picture will look roughly like this (complete with everyone troubleshooting their audio/video): 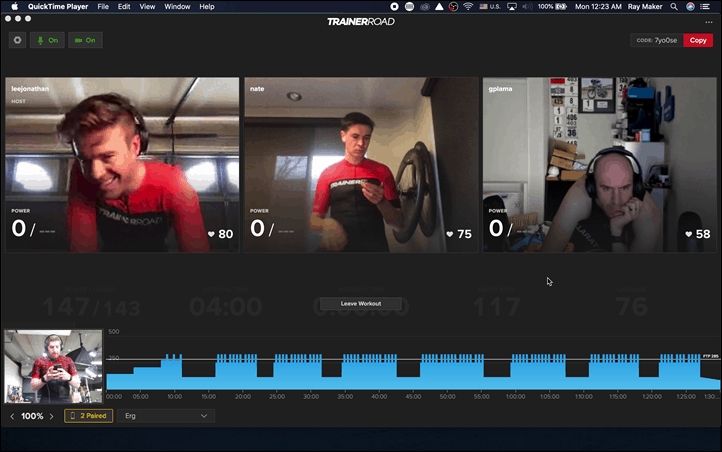 As noted before, I suspect the first few times everyone will be playing the ‘Do you hear me?’ game a bit. After that, the ride leader (the one who sent out the code), can press ‘Start workout’ and off you go.  You’ll see everyone else, along with their wattage target and current wattage. I suspect we’ll see that change, or at least the option to change it, to something that’s a bit less personal (like % based or watts/KG). 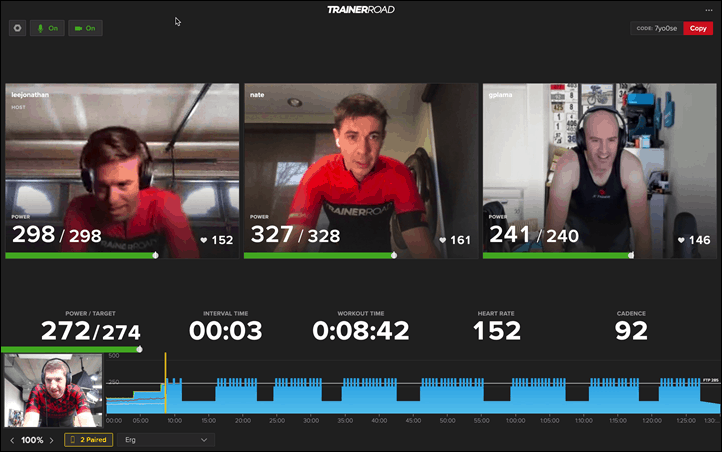 Everyone’s smart trainers will change resistance at exactly the same second – inflicting pain on everyone at the same time.

And just like any other conference call type service, everyone can hear everyone at once. Latency isn’t too bad. I tested multiple sessions with myself in Europe, the TrainerRoad guys in Western US, and GPLama in Australia. We had no issues carrying on a conversation at all. From a technical standpoint, the service functions as peer to peer directly, unless the network path is blocked due to firewalls/etc, in which case it’ll route through the TrainerRoad servers instead. I saw no issues with routing or connectivity during my usage. 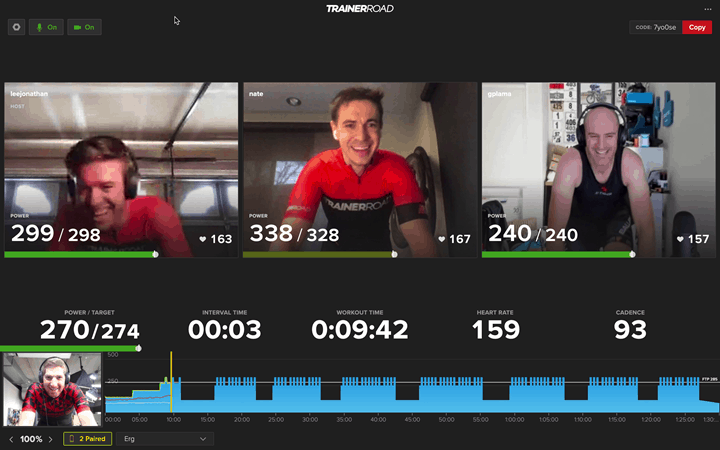 The host can extend the cool-down. This is useful if people want to chat.

And honestly, the whole thing is as simple as that. The “just works” factor is high, assuming you manage to pick the right microphone or speakers from the list (and on both Mac and PC, it can sometimes be quite the list!).

Finally, once the workout is complete it’ll end the recording of the file, however, the video chat session will stay alive until you close your window or the host ends the session 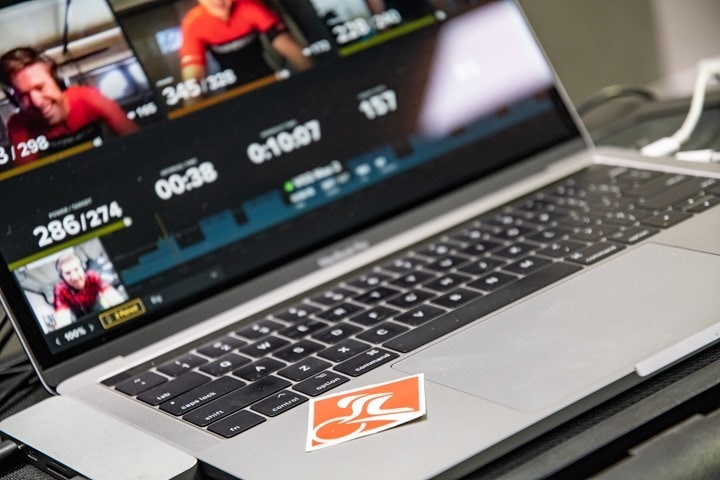 By and large we don’t actually see a ton of revolutionary innovation within the indoor trainer app realm each year. Lots of evolutionary bits, but rarely a big ‘whoa’ moment. I think this is pretty close to that. But not because TrainerRoad is doing something that’s never been done before (others have). But because it’s TrainerRoad that’s doing it. And even more importantly – because it’s cohesive.

None of the other trainer apps today incorporate video (or audio) into structured group workouts from all participants. Zwift has talked about doing group audio since the first time I met with them 6 years ago. But ultimately, nobody ever did it. Sure, people have been doing Zoom/Skype/etc type group sessions, but not where everything is perfectly synced and within the app itself. Not where you can see everyone else’s wattages/HR’s right on the screen just like in a real group session.

Still, it’s not a perfect solution. Or at least, not a perfect end-state. Right now it’s got a maximum of 5 people per group. TrainerRoad has tested into the 12-16 range successfully without issue, but they simply want to start at 5 people to vet the concept with larger quantities of people across a bigger pool of users, before they expand that. And ultimately, my ask would be for one to many options. For example, if a coach or team wanted to broadcast from the coach seeing his or her video/audio/metrics, and everyone just sees that one person – scaling up to hundreds or thousands. And then have that all be done via a simple ‘easy button’ solution that provides a link to join that could be easily shared on Facebook or other social media platforms.

We’ve seen some pro cyclists do that with Zwift in recent weeks, again, out of band of Zwift using 3rd party streaming software. I think there’s tremendous potential for this sort of visible interaction. Not that me thinking that takes much of a leap here – Peloton has over 750,000 users that do one to many streaming of their classes already. And plenty of other platforms too.

Still, what they have today is super cool for small groups of friends. And the company says they’re looking to iterate on this very quickly to add in the features/gaps that I discussed above. With that, off to begin my group workout I go!