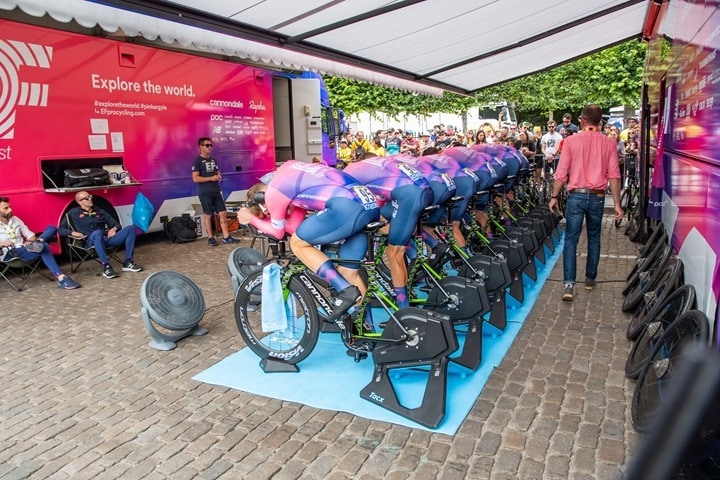 Today marks the second time trial of the Tour de France, this one an individual time trial, versus the team time trial of the opening weekend.  While that’s a substantial difference from an athletic standpoint, the underlying technology used by these teams remains the same – at least when it comes to the trainers and power meters.  Well, minus one exception we’ll get into.

I like to profile the WorldTour teams each year and dive into the sports tech. But it’s crucially important to remember that these are *sponsored* teams. Every bit of equipment you see on these athletes and teams is driven by sponsorship funds. From the bikes to the wheels to the power meters and trainers. Every team at this year’s Tour de France has specific sponsors in those categories. As such, none of their choices indicate anything more than a convenient funding stream.

And in fact – one of the most high profile teams of Le Tour has actually bucked that trend, ignoring their specific power meter sponsor and partially riding their previous one. An acknowledgement of the lackluster state of their sponsor’s product. But more on that in a moment.

Finally, all of this was gathered in person at the opening time trial stage. However, as you might imagine, trying to cover 21 teams in a short timespan across almost half a mile of team bus areas with staggered timeframes is…challenging. So while I’d have loved to also cover things like GPS bike computers (virtually all Garmin, save one or two Wahoo teams, one Pioneer team, one Stages team, and one Bryton team) – doing so requires more people concurrently to pull off.

With that, onto the stats! 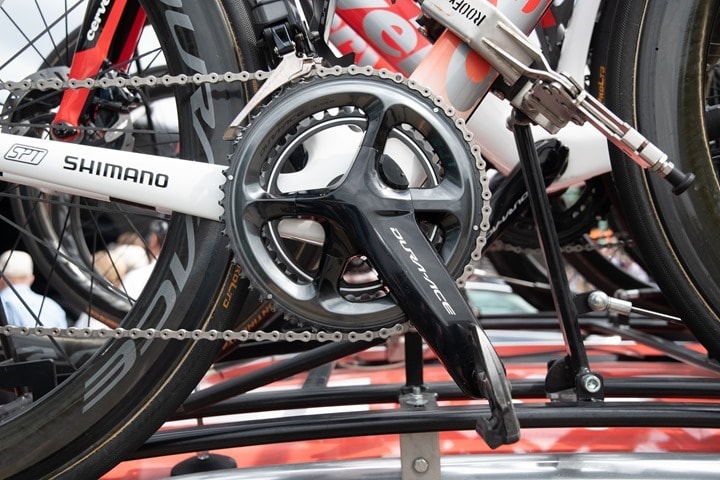 As a general rule of thumb, Shimano spends the most money of any bike related parts supplier on ensuring the pro peloton is equipped on their gear. There are and were exceptions to that, such as a few years ago when SRAM was introducing eTAP, they spent a boatload of money for a year or two to have a significant quantity of teams on SRAM RED eTAP, to ‘prove’ it was capable of the grand tours. With that mission accomplished, SRAM saved some cash and Shimano spent more.  No matter how much internet chatter you read, that’s the hard reality of it: Sponsors equip what the teams ride. End of story.

With that said, here’s the breakouts by team:

And here’s a small gallery of them:

You’ll notice there are no pedal based power meters. Again, don’t overthink this. The reasoning is super simple: There’s only four pedal based brands on the market these days (PowerTap P1/P2 now Quarq, Garmin Vector, Favero Assioma, SRM EXACT), and none of them really want to spend the cash to put pedals on pro teams bikes. But there is a secondary aspect: Pro riders are notoriously finicky when it comes to their pedal choices. With all of these pedal based varieties currently on Look/Look variants, that’s super limiting.

If we harken back to the days of Garmin trying to equip their tour teams in Vector 1/2, there were two issues there. The first was that both of those ones still required the clunky pods – which pro team mechanics hated dealing with. And second, there were prior pedal-based contractual obligations otherwise for some riders. It was never an accuracy thing.

Now, the most interesting one of the day was Team INEOS. See, Team INEOS is technically sponsored by Shimano for their power meters. That changeover occurred earlier this year when Shimano offered more money than Stages did (wherein Stages has sponsored Team Sky for many years. Simple economics. And sure enough, you’ll find some Team INEOS bikes running Shimano power meters.

Pro Tip: Spotting Shimano power meters is easy, as they have a glossy black pod on the inside with a tiny button on them. 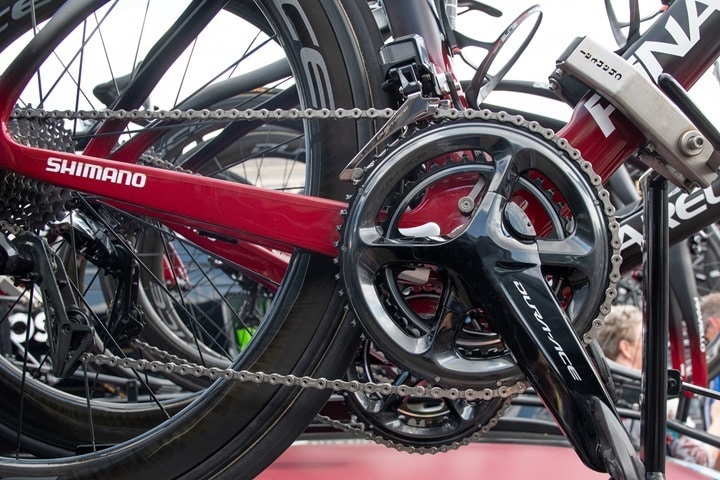 Except, you’ll find roughly between 1/3rd and 1/2 of them running Stages power meters (Stages LR dual-sided units), spread across both their time trial bikes and their road bikes: 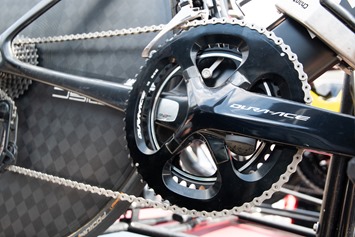 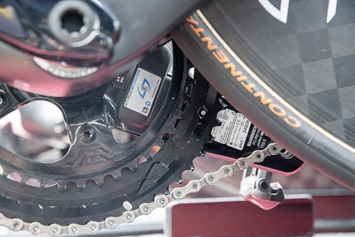 Well, I was curious myself. So I found a team mechanic and got the least PR answer possible: “Rider preference”.

Which of course is a really direct way of saying “We don’t trust the Shimano power meter”, since after all they’re the exact same cranksets on both.  And frankly, I don’t blame them either. There’s no mainstream power meter (save perhaps the SRM EXACT pedals depending on the day) that’s as least accurate at the Shimano R9100P – something shown repeatedly by reviewers around the world – no matter how many firmware updates Shimano issues. And while the Stages LR Shimano R9100 based units have some of their own quirks, I’ll happily take those quirks any day over a Shimano power meter. And Team INEOS appears to agree.

I suppose this is a case of ‘Things Team Sky/INEOS’ can get away with that other teams probably wouldn’t be able to. And I don’t mean that in a negative way, but in the ‘perks of being the most valuable team’ kinda way. 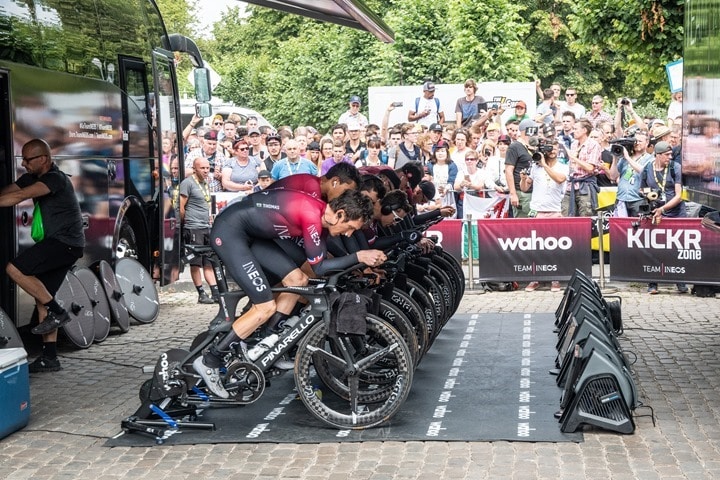 For the most part, trainer companies are easy at the Tour de France. The tech is largely divided up into two camps: Elite & Tacx. Then Wahoo and CycleOps have one team apiece. Easy peasy. Again, like power meters, these are all sponsorship driven choices. And even more so, the specific trainers each team uses tend to be sponsorship driven too.  For example – Tacx prefers that teams use the NEO series units, since those are the highest end ones they currently produce. Still, there are cases where teams prefer other trainers for generally logistical reasons.

Some trainers require power, and other trainers (including the Neo) are harder to handle/deal with due to weight or size. For example the higher end trainers like the Tacx NEO, Elite Drivo, Wahoo KICKR, and CycleOps Hammer series units all weigh in close to 50 pounds. Teams will typically have 7-10 trainers with them – so that’s upwards of 500 pounds of extra gear to deal with.

When it comes to usage, generally speaking teams only use trainers at the start of time trial stages (individual or team), as well as at the finish of shorter stages, or in some cases finishes where a team rider may be a podium contending sprinter or have been part of the breakaway. In those cases the trainers are used for cool-down. Chris Froome is/was well known for having a trainer ready for him to use prior to the podium ceremony after each stage. Typically speaking there’s about a 10-25 minute gap between the riders coming across and the podium ceremony occurring – depending on the specifics of a given stage. 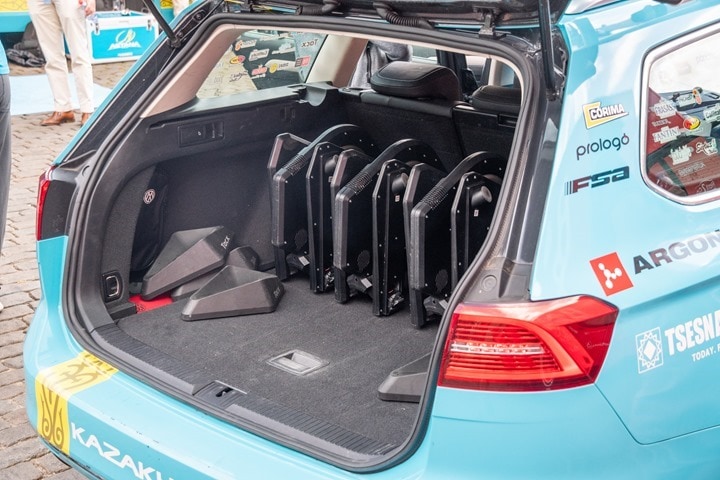 In any case, here’s the rundown of teams, first by trainer company – with the primary trainer type listed when I had it available. Note these teams are often equipped with plenty of gear from Elite/Tacx/Wahoo/CycleOps. So in some cases they may use one trainer for training and another in the Tour. One reader pointed out that for certain time trial stages there are good reasons to use a wheel-on trainer, namely validation that no last-second bike component issues occur between the time of taking the bike off the trainer, adding a wheel (often a disc), and then pedaling the 100m or so to the timing start area.

One point that came up in discussions recently with one trainer company was whether or not it was ‘worth’ it to sponsor so many teams. Meaning, Tacx sponsors 11 WorldTour pro men’s teams (+ women’s teams and other teams/individual athletes). From a product recognition standpoint – does it matter if they sponsor 11 versus 7? And if not, could that money be better spent sponsoring a broader range of athletes (including more women)?

It’s exactly that topic that we discussed in the FIT File Podcast this week, in front of a live audience as well! You can check it out here. But would love to hear your thoughts on it (and I think these companies would as well.

Of course, I’m sure you wanted to check out some trainer shots. Fear not, me too. Enjoy!

Now some trainer companies do special paint schemes for their teams if they win certain jersey’s or such. For example Wahoo has in the past had yellow-chevron themed Wahoo KICKR’s, and Elite has done a pink Elite Drivo for the Giro. This time around, it’s Tacx that has painted a slate of trainers for the current jersey holders to ride during any warm-ups. Here’s a couple of pics of those: 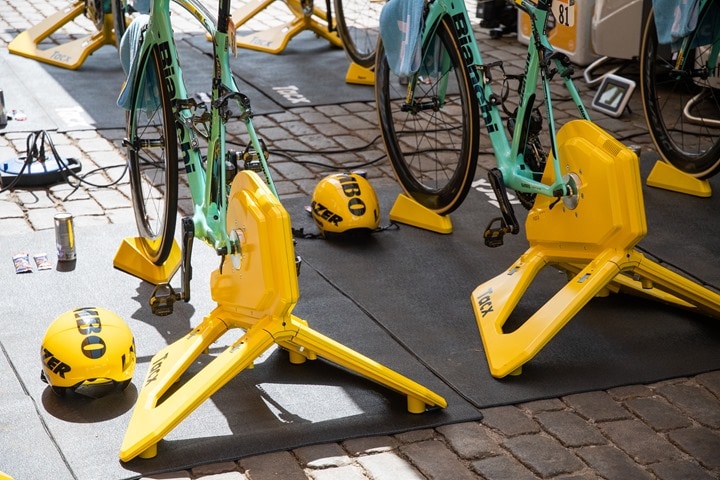 Someday if you get in a bar somewhere, you’ll have to hear about the funny story trying to get a picture of Jumbo Visma’s yellow-themed trainers. In case you were wondering why I don’t have a super swanky pic of one.

And yes, Team INEOS did have Wahoo Headwind’s on-deck for their riders. 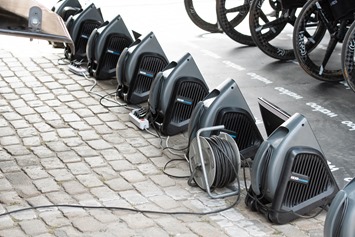 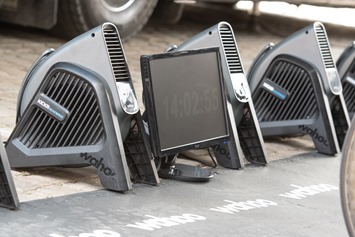 Including having both the Headwind’s and KICKR’s powered via an array of power strips. The screens merely showed the time of day, nothing fancy there.

Also – probably the most interesting thing of the day for me on the trainer front was actually watching one of the team mechanics fold up a slate of Tacx Neo trainers. Seriously, it’s genius:

Now – I figured I was the only village idiot who didn’t know this super efficient way of folding up a Tacx Neo, but it turns out I’m not alone. Neither GPLAMA or DesFit knew this trick either. Seriously, when I showed them the video – there was just silence. Like, how on earth have none of us ever seen this method? All of us typically fold it to one side, unlock it, then fold it back to the other side and rinse-repeat.

Anyway…now you’ve learned something useful. Unless you have a KICKR, in which case the knowledge is useless. 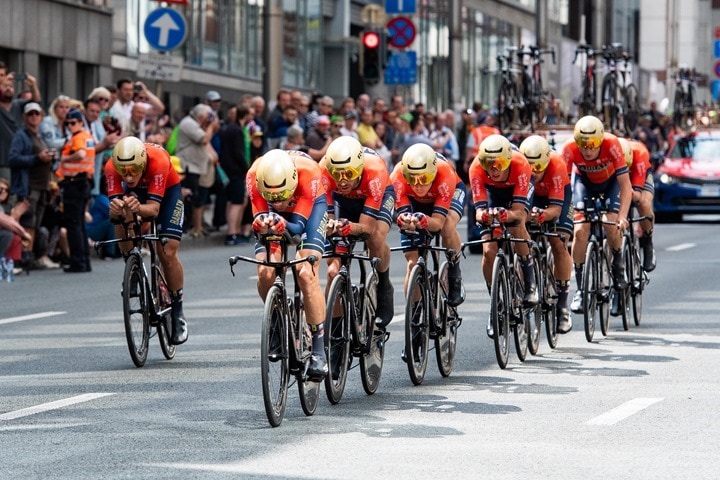 So there’s your full wrap-up of trainers and power meters. For the most part these units don’t change at any point in the 2019 season, starting from the Tour Down Under back in January till the last race of the year. What can change however is minor editions/models along the way.

For example, you’ll see Elite’s teams using the new Elite Suito trainer tomorrow at the time trial stage. Obviously that’s heavily for promotional reasons, though I suspect you’ll actually see most Elite sponsored teams switch to that trainer going forward for logistical reasons. It’s super lightweight, easy to move around, and compact. And it can even be used without power as well – a huge plus for certain situations.

Speaking of more gear – tomorrow I’m going to highlight all of the pro women’s trainers/power meters. I was at the Giro Rosa last week and in many cases the differences couldn’t be more black and white (compared to the men’s side). Still, there are some brands that are doing it right- and it’s very much worthwhile highlighting those (as well as giving encouragement to those brands doing it wrong). Stay tuned!