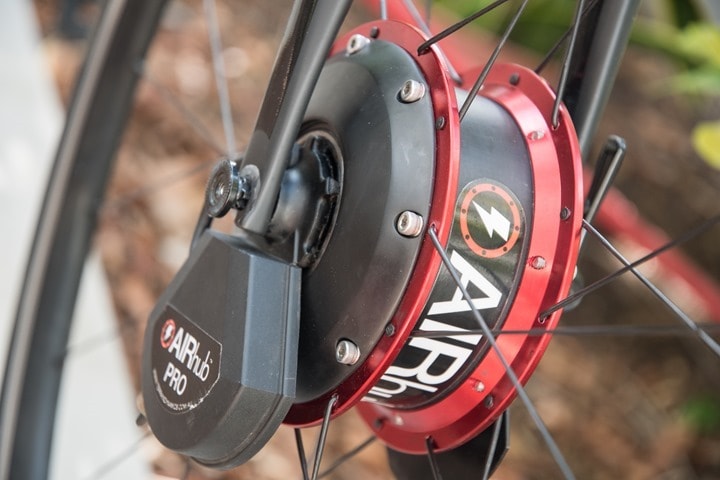 Last year about this time I tried out the original AIRhub while down at the Tour Down Under.  That product is essentially a front wheel that provides resistance that you can control from your smartphone via Bluetooth Smart.  It has a bunch of different modes, including some that pair to your power meter and heart rate sensors via ANT+.  In effect, the wheel can apply enough wattage resistance to make you cry on even the flattest and busiest of pedestrian/bike paths.  Or, to make you feel like you’re throwing down 300w when you’re actually biking next to your 8 year old. Roughly.

This year though upon my return to Australia I got to give their latest product a whirl – the AIRhub Pro.  Now you may be thinking that with the ‘Pro’ moniker comes even more connected goodness, and probably a bigger price tag.  But you’d be wrong.  In reality, it has no connected anythingness, and it’s actually cheaper.  Yet I think it’s actually better.  But first, let’s step back a bit.

Or, if you just want to step right into it, here’s the whole thing summarized in just a few minutes (complete with some nifty GoPro Fusion captured footage):

On with the text and photos! 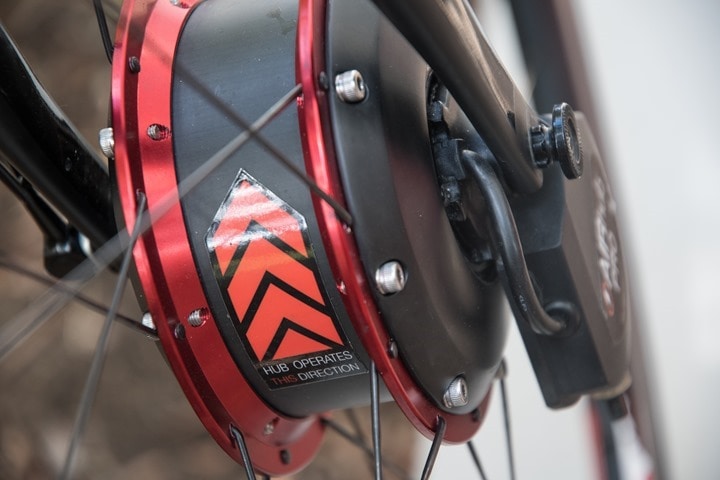 The first thing you should probably know about the AIRhub Pro is that it doesn’t actually use air for anything. Fake news, I know, but the name at least sounds cool.  Instead, in order to provide resistance, the wheel uses electromagnetic braking within the hub.  Except, it doesn’t really feel like manual braking.  Rather, it’s more of just a slight questioning of yourself if you’re working harder than you should. 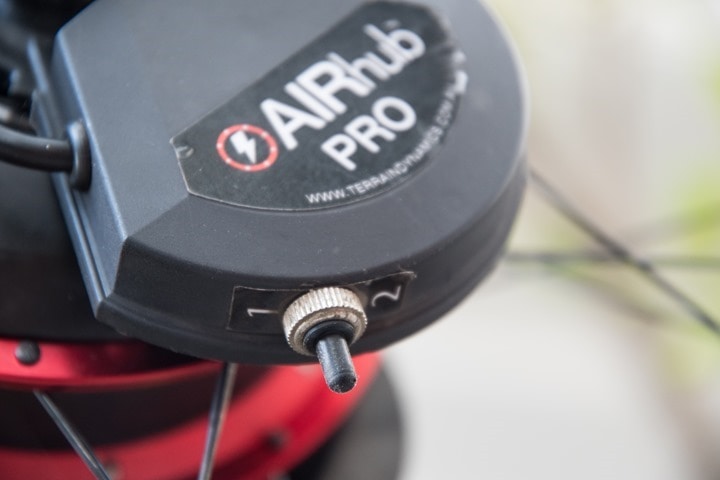 To help you make sense of all that resistance power, here’s a bit of a chart they have explaining it all: 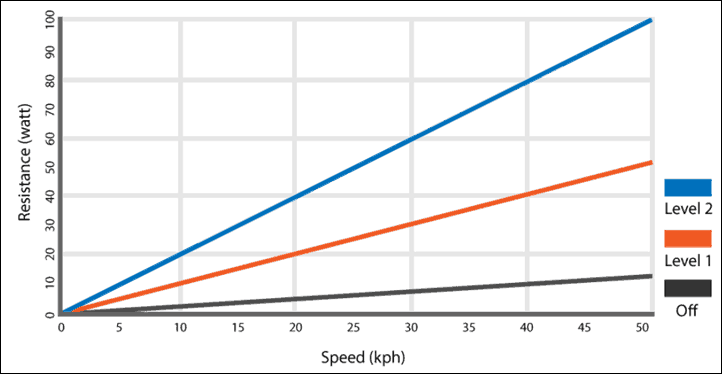 So why would you want something like this?  Well, there’s basically two core scenarios.  My apologies for being Simon Cowell-like in describing them:

The first scenarios is if you’re riding with someone who simply can’t throw down your wattage.  This allows you to add additional wattage to even the playing field a bit, and thus ideally keeping you together for rides.  The same concept also applies to group rides too.  Can’t find a fast enough group?  No issue, just apply more resistance.  The company says some of their pros even use it to fulfill ‘sponsorship requirements’, which is a fancy way of saying ‘to ride with regular slow people at events’.  You know, like that time this summer I rode with Jens Voigt at a media event on what were basically glorified beach cruisers.

In all seriousness though – back when both The Girl and I were concurrently training for Iron-distance events, this would have been awesome.  The #2 switch probably would have put us pretty close to the same ballpark within each other for most riding.

The second scenario is less obvious, but more useful depending on where you live.  It’s the ability to ride on shared bike paths and other low-speed locations, but with legit wattage.  Any competitive cyclist/triathlete knows the pain of trying to get a workout in on a shared bike path.  Either because that’s the only safe locale, or just because it happens to connect you to better roads.  I did exactly that last week, where I took out the AIRhub on some local bike paths and enabled the wattage.  I was still able to get a fairly legit workout in, staying in the 250-280w range on twisty and turning paths (complete with sand). 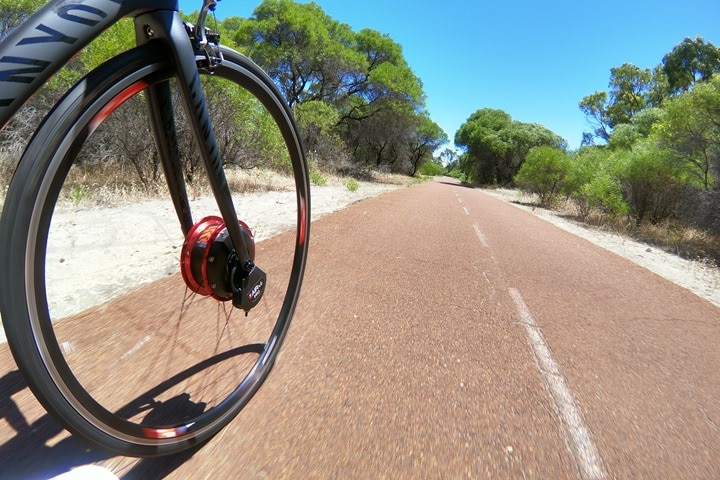 It’s those type of places that the company also notes their pros tend to use their products around.  Not everyone spends the full year on Mediterranean islands with beautiful training roads.

Now, on the site the company also talks about using the device akin to a weight vest – just leaving it always on and always providing a bit of resistance.  And that’s certainly something you could do.  But I’m less convinced about the practical benefits of that.  In my opinion, if you’ve got the roads and friends to ride fast and hard, you should do so as part of a regular training diet – no wheel required.  But if you lack those two things, then this does indeed provide a good substitute. 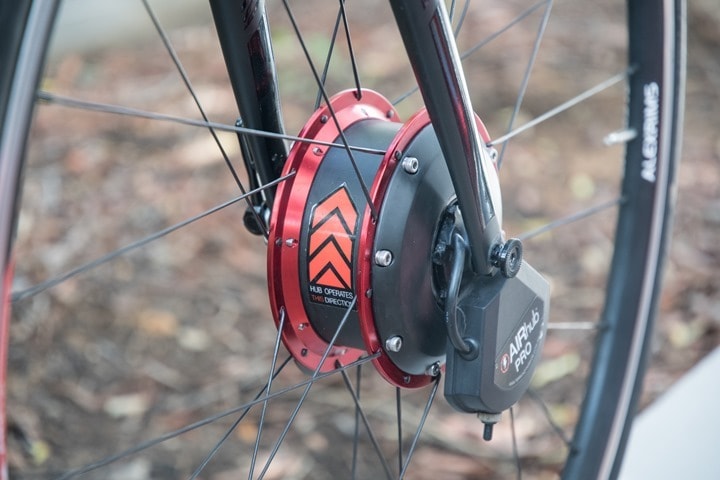 This section will be relatively short, since there’s only so many words I can use to describe going slower.  In my case, I borrowed a wheelset from them about two weeks ago.  It was sorta a perfect timing type of situation in that my bike’s regular wheelset had to be repaired, and the AIRhub crew wanted me to try out their latest wares.  So I borrowed a wheelset from them to poke at for a couple weeks. It goes back tomorrow, as my wheels returned a few days ago.

At first you might not actually notice it.  Which isn’t to say it’s not providing resistance – it most definitely is.  But like a lobster getting slow boiled in a pot, you don’t realize it when starting from zero.  Rather, it just feels a little bit out of place harder.  As if you’re not fit.

For my first ride portion, I used some meandering paths along the beach.  On this weekday morning, they were practically empty. 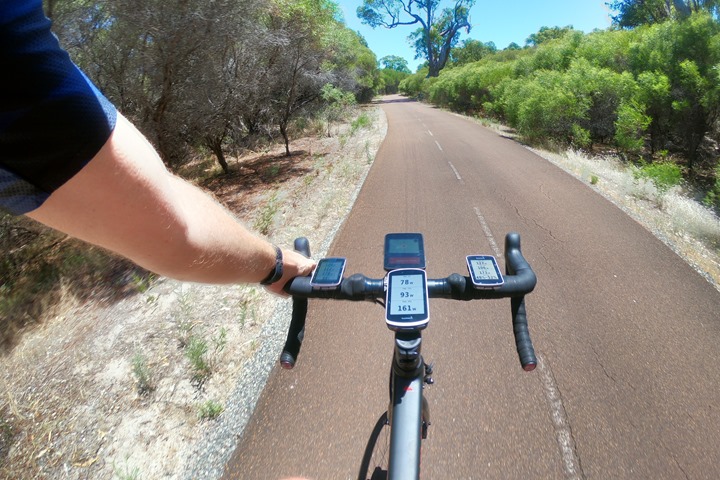 However, in the evenings and on a weekend they get packed with slow-moving pedestrian, canine, and cycling traffic like a clam bake.  Not to mention it has sand on the path, reducing the speed I can take any corners.  Despite this, I plodded along and once switched into the #2 setting, I was getting a legit workout in on these paths.

The downside though? That switch isn’t reachable from the handlebars, or any other way that I can figure while riding.  I suppose if you were one of those crazy UCI Indoor Competition cyclists, you’d find a way to still pedal and access it, but it was just out of reach for me (and I didn’t want to keep on trying it either).  If you’re unsure, try accessing your quick release skewer while riding.  Not bright, right?

Now I can’t blame them entirely here, but it is a downside nonetheless.  Obviously, their non-Pro model includes the ability to change the resistance applied from the handlebars via smartphone.

Back to riding it though – it felt fine and natural.  It didn’t feel like I was holding the brakes on my handlebars.  Rather, I just felt…slower.  Sorta like a headwind.  You question yourself a bit and wonder why you’re slower. 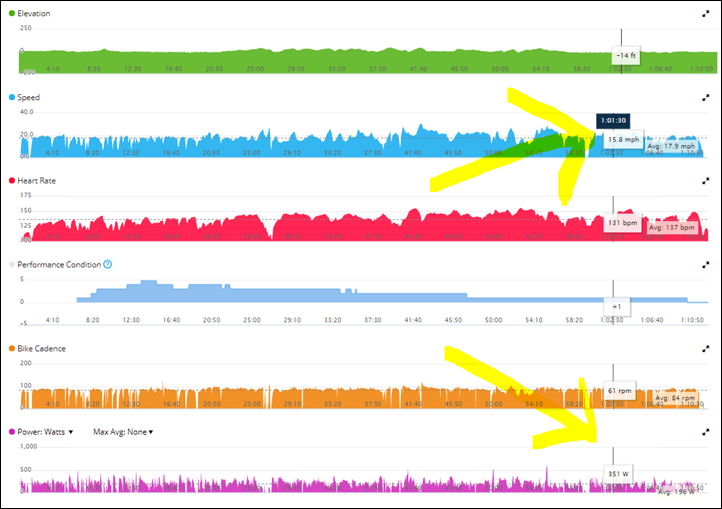 Which, ironically enough was exactly what happened the next day when I went out for a longer ride.  I left the neighborhood and just as I was doing that two cyclists cruised by.  They were well-equipped road cyclists with all the proper equipment trimmings, just as you might see in any group ride.  We were apparently going in the same direction, so I figured I’d ride along with them.

Except for some reason it felt like they were throwing down serious wattage on what was clearly a casual ‘top of the morning’ pace.  While one shouldn’t judge a book by its cover, neither of these two guys looked to be magically a pro cyclist, thus, I couldn’t figure out at first why I was having trouble holding on with them.

And then I realized it: I had left the wheel on #2 from the day prior.  Basically, I was getting #2’d on.

Then came the only challenge: Turning it off.  Either I’d drop off the back to fully stop my bike and turn it off, or, I’d suffer till the next light.  Eventually, I suffered through to the next light, but by then they slid further away from my grasp.

Still, in many ways, it perfectly illustrated what the system can do, even if unintentionally so. 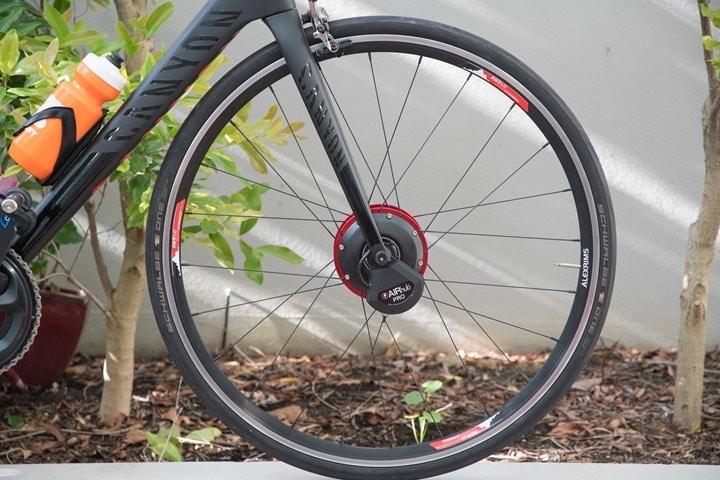 Of course, all this anti-power comes at a price, and a steep one at that.  The AIRhub Pro sits at $1,000USD, which is pretty darn pricey.  But at least that’s cheaper than the original connected AIRhub, which is $1,550USD.  That version though comes with a Quadlock case kit setup (about $50-$70 in value), as well as a 4iiii Viiiiva (another $70-$80 worth).  And thus, is fully controllable via phone.  It can provide resistance automatically based on your heart rate or power for example.  It’s super cool tech.

But I think for most cyclists, the limiter is really the phone piece. Almost everyone carries a phone with them cycling, but most people in this target audience wouldn’t do so on their handlebars.  Which is practically the only way to control the non-Pro AIRHUB.  As such, it’s a bit less appealing to those of us that use bike computers from Garmin, Wahoo, etc… If the company had integration via a Garmin Connect IQ app tied to structured workouts, or had integration to the Wahoo BOLT natively, those would be incredibly appealing.

To me though, it’s mostly about price and simplicity.  The Pro model is cheaper, and frankly easier to use and understand.  I know it’s going to do exactly what I expect it to when I toggle that switch.

However, price overall is still an issue, just as it was with the original model.  At $1000, it’s largely out of range of what most will spend.  The company says it’s basically just a volumes issue for them. Being a smaller company they just aren’t producing the numbers needed to get manufacturing costs lower.  Personally, I think this product would explode in popularity if it could reach the $499-$699 price range.  That makes it something I’d very much consider, and I suspect something that coaches/teams would also consider having in their stable for certain athletes to ride.

None of which takes away from the product – it’s well executed and simply does exactly what it claims to do.  Sometimes, simpler might just be better.