Tour Down Under 2017: Sports Tech Gear Of the Pro Women 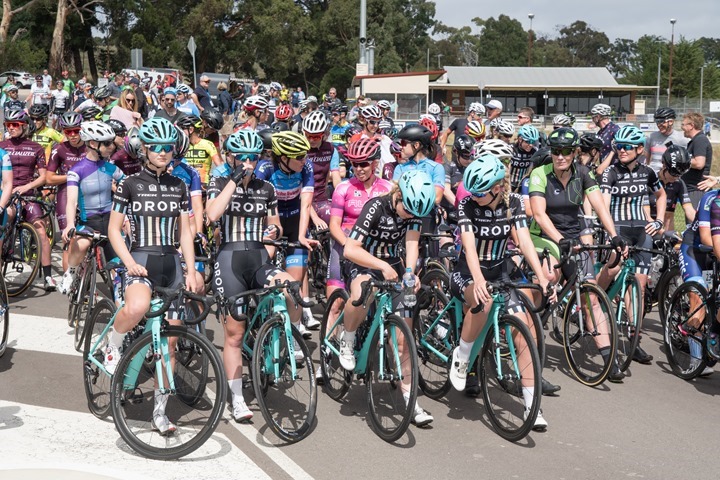 There are many great aspects of the Santos Tour Down Under, from the fan-inclusive activities, to the stage structure.  Non-locals may not realize for example that the teams all actually stay in one city (Adelaide) throughout the entire race, and each stage simply starts/ends in nearby towns.  Thus eliminating a nightly hotel shuffle to a new town.

However, more important than all of that is that there’s a legit women’s stage race held as part of the event.  This isn’t some half-hearted one-day affair to appease women (*cough*, you know what race I’m looking at), but rather a complete 4 stage event.  Sure, it’s not the same as the men’s 6 stage event (+ one-off single day race), but it’s a good start.  In the case of the Tour Down Under, the women actually start off the festivities with a 106.5KM stage on Saturday, prior to the men on Sunday.  Thus, they’d be the first to race and the first I’ll be covering from a tech perspective.

I headed up this morning to the mountains to check out the start of the women’s race, and most notably take an inventory of the women’s sports tech gear – focusing mainly on power meters, shifting, and bike computers.  Though, I’ve included photos of all the bikes – so you can pretty easily look at other componentry as well. 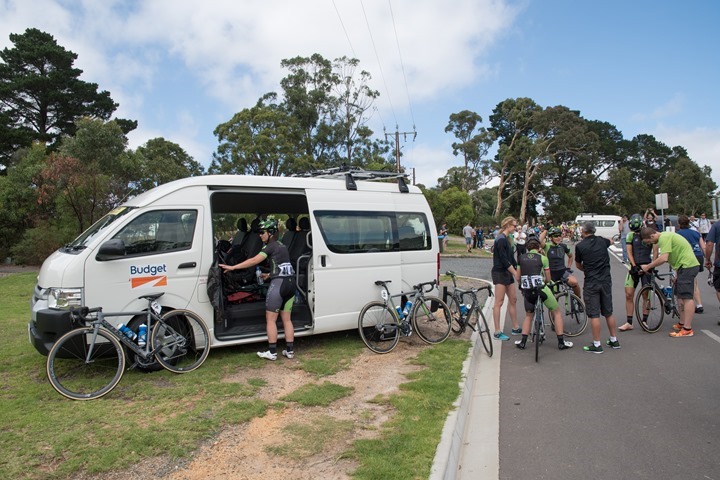 Now, as you’ll see – the women aren’t exactly working from the same decked out team buses as the men.  In fact, not a single team had a single large team bus.  At least not in the definition of what you think of as a pro cycling team bus.  Rather, most were simply rented mini-vans from AVIS and Budget.  They’d slap on a team logo and call it done.  This isn’t much different from what I’ve seen at La Course over the past few years, where teams just repurpose small rented RV’s.

Which isn’t a knock on the teams, but rather, that’s the reality of sponsorship money in women’s cycling today.  For the hundreds of registered media at the Tour Down Under, I saw precisely three other credentialed media at the start of the women’s race.  I’m sure there may have been a few I didn’t spot – but this still puts it into perspective.  There were no other men’s events going on within hours of this starting timeframe. 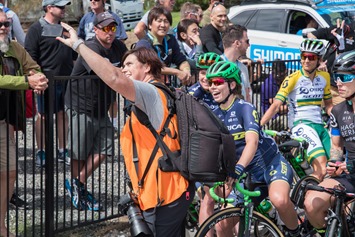 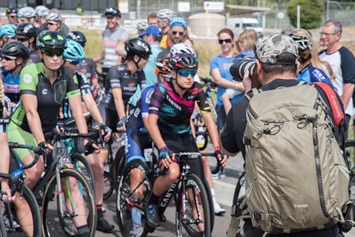 But the buses are in many ways indicative of what I saw when it comes to equipment.  Sure, all teams were standardized on a single bike frame.  But that’s pretty much where it ended on bike components.  Only the most well funded of teams – Canyon/SRAM and United Health Care – had all the other componentry matching.  The remainder of the teams were clearly assembling things as best they could to make it work. 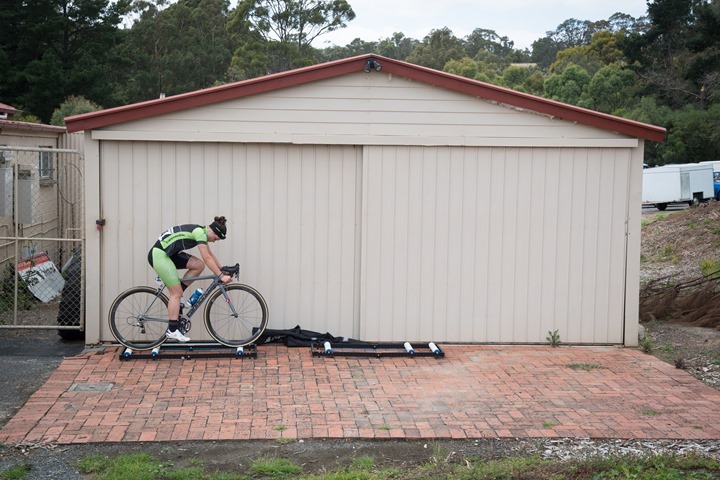 Compare this to the men’s field and you’d find every last detail attended to.  As I returned from the women’s race today I saw the bike’s of the well-funded men’s Bahrain Merida Pro Cycling Team, sitting at a café outside my hotel.  I couldn’t help but be struck that not only were all of their bikes perfectly matching, but even their SRM PC8 head units were in matching gold.  Contrast that to only a single team on the women’s side – United Healthcare – had matching bike computers and mounts (Pioneer).  Every other team was largely a diverse collection of Garmin head units, spanning back 8 years ago (Edge 500) to last summer (Edge 520).

Also, it’ll be interesting to compare the three product categories (power meters, head units, shifting) to tomorrow at the men’s race.  If last year’s setups are any indication, you’ll largely see almost everyone on electronic shifting on the men’s side, vs just a handful on the women’s side.

(Note that I’ll cover more of the spectator/fan portion in tomorrow’s women’s race, which is a bit easier to get around than today’s course out in the mountains since I wasn’t on a moto.) 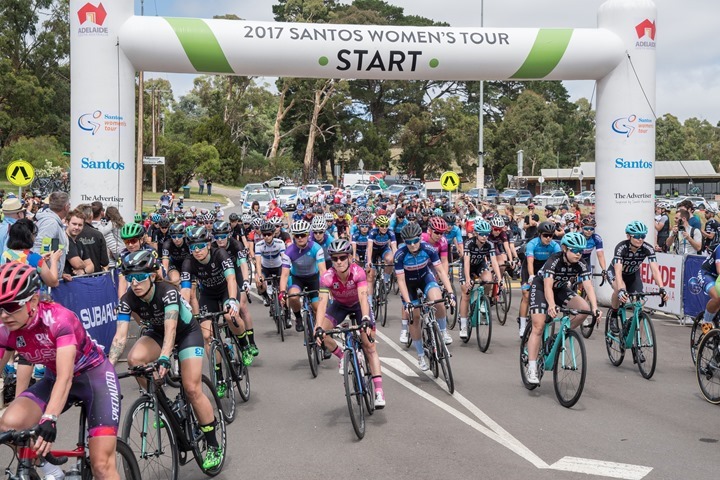 I’m going to run through each of the teams present, and the sports tech gear they had.  Note that in most cases there was some variance between bikes when it came to power meters & head units.  I attempted to count up as best as possible which teams had which things, but sometimes a rider would be out on the roads warming up, checking-in, or such.  So it’s possible a few out of the 102 riders may have slipped by. 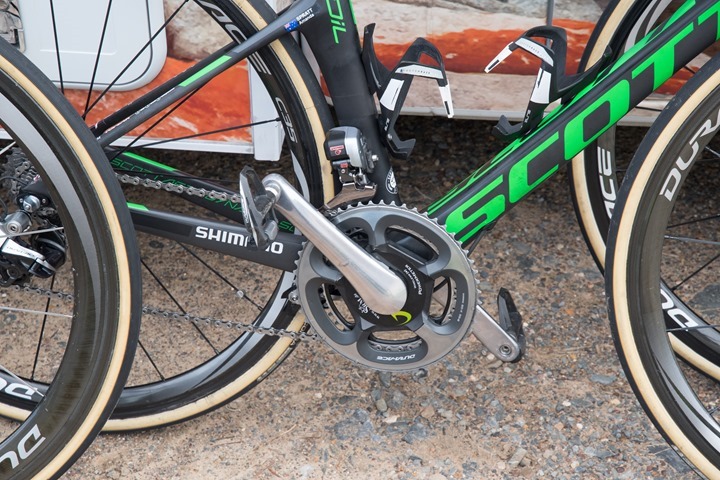 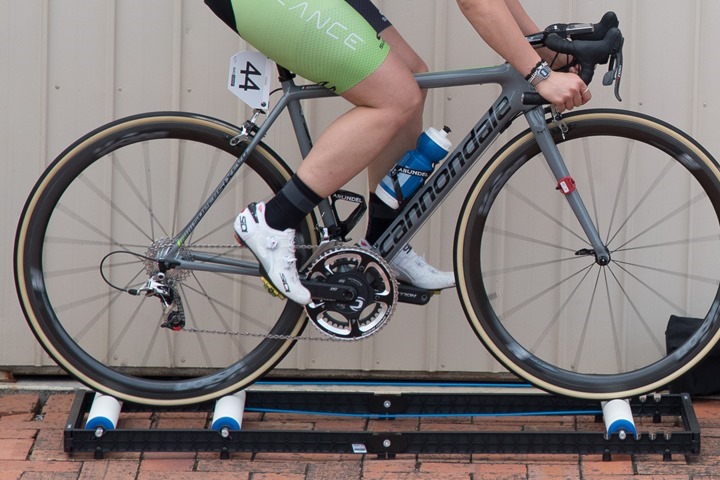 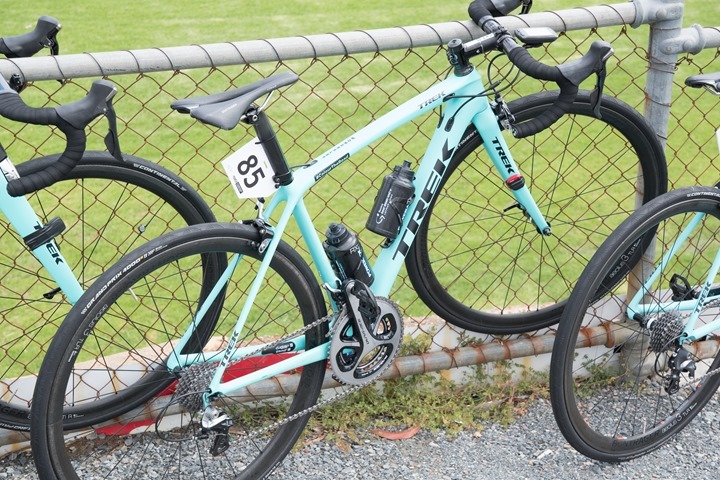 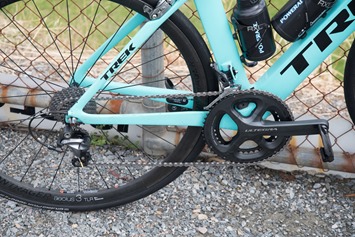 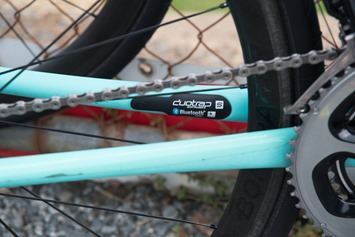 Power Meters: None
Head Units: All Garmin, except one with SRM PC8 but no SRM power meter
Shifting: Mechanical:
Random Tidbit: All bikes were outfitted with Bontrager’s dual ANT+/BLE Duotrap speed/cadence sensor spots, though, the sensors themselves aren’t installed. 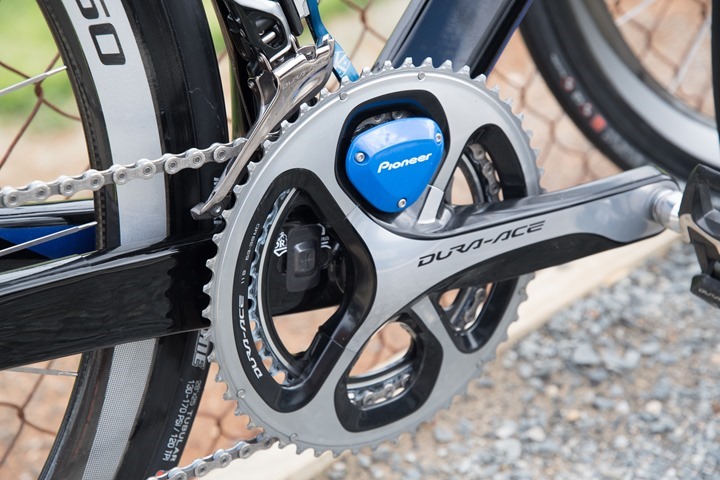 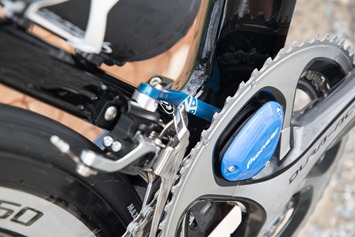 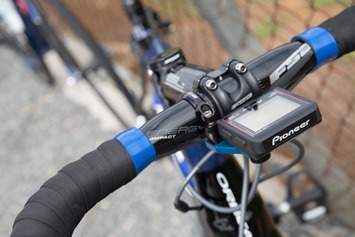 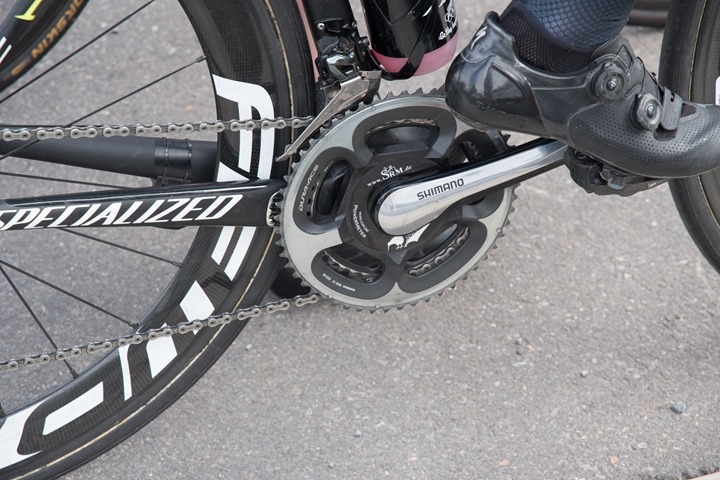 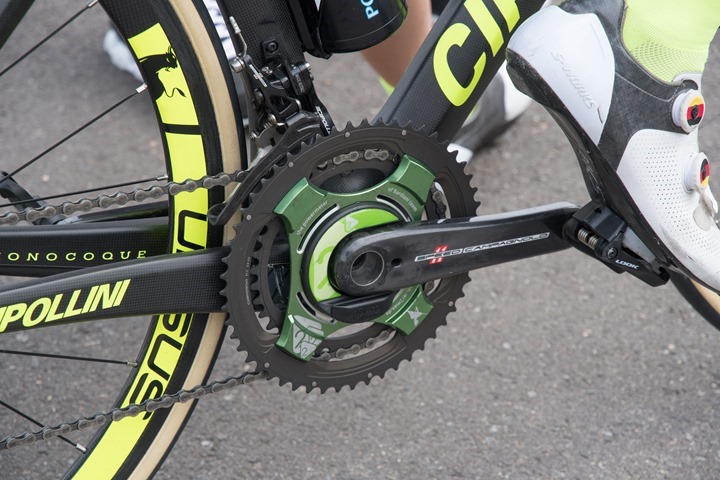 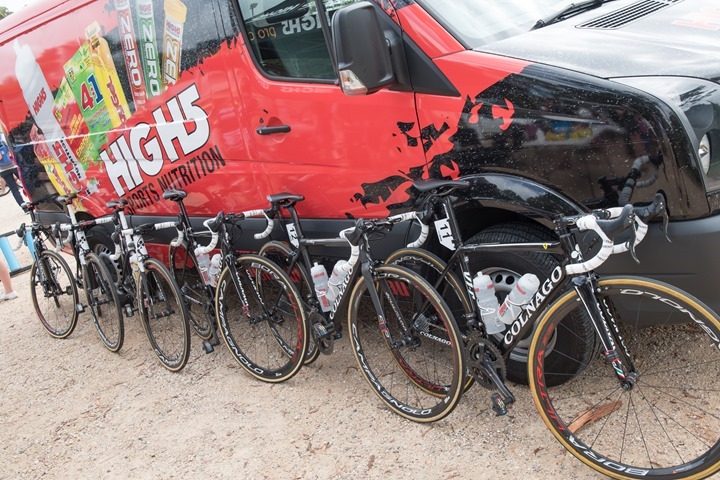 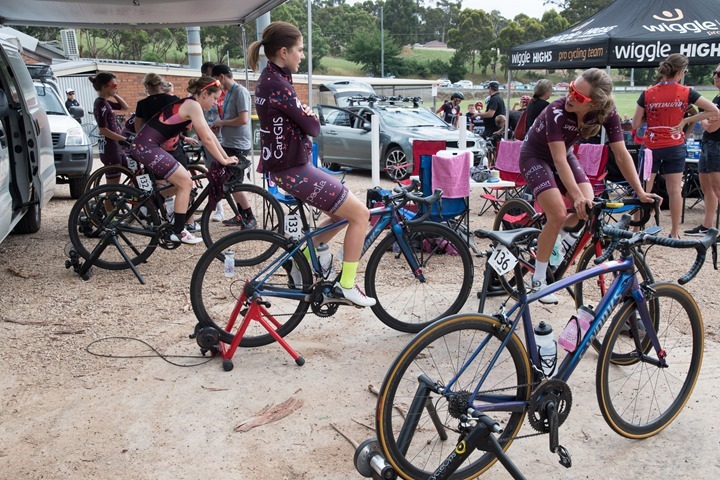 Power Meters: Handful of Quarq, a few SRM
Head Units: Garmin Edge series (mixed)
Shifting: Shimano Di2 and Shimano mechanical
Random Tidbit: This was one of the few teams on trainers, and it was quite the variety of trainers. 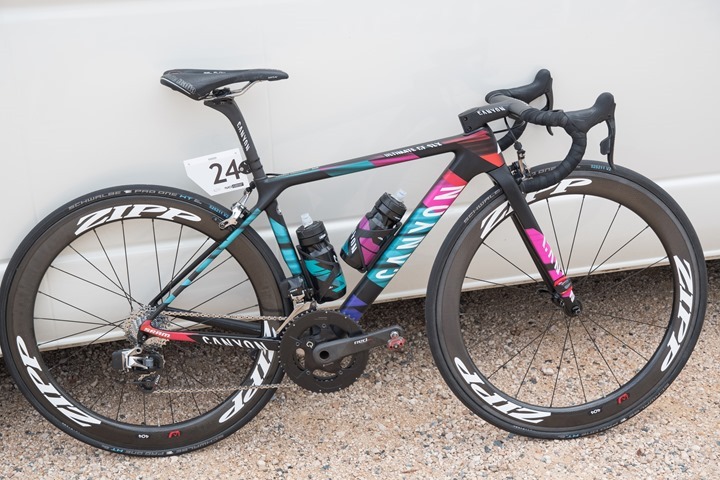 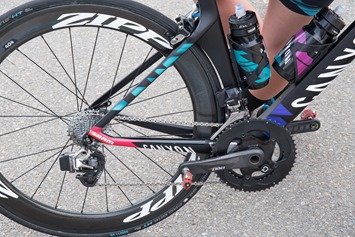 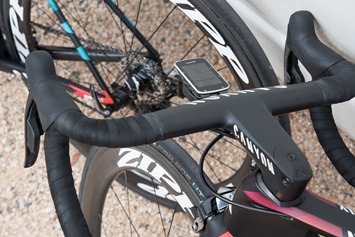 Power Meters: Quarq
Head Units: Garmin Edge series (mixed)
Shifting: SRAM RED eTAP
Random Tidbit: This is the only team with everyone on electronic shifting and everyone having a power meter.  Of course, it helps that your headlining sponsor makes both of those (SRAM). 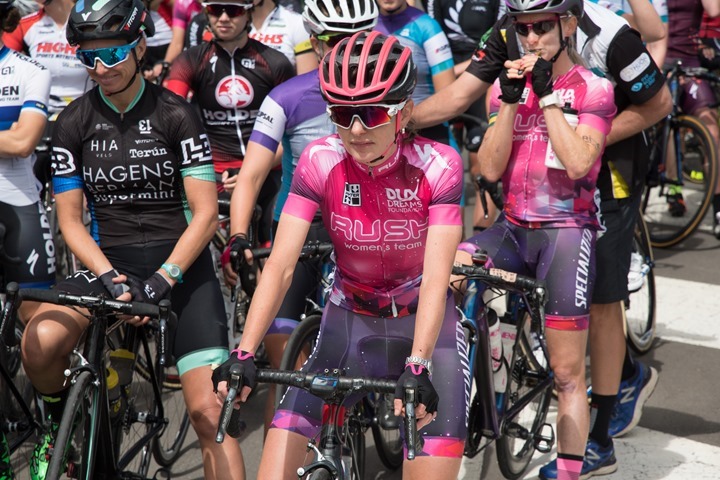 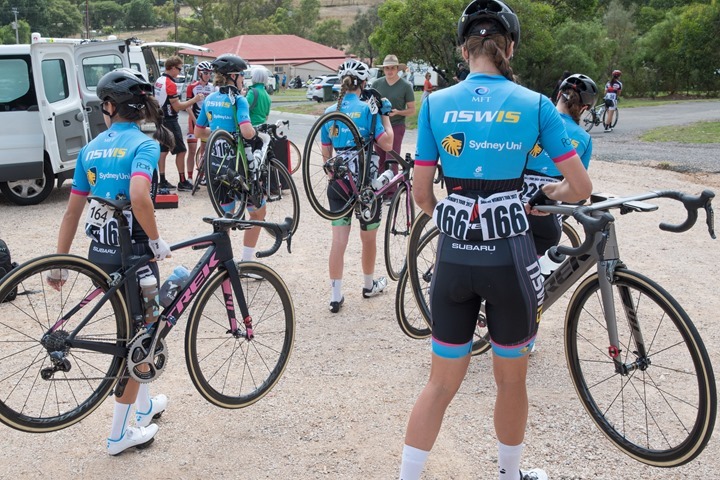 Note: The following teams I couldn’t seem to find ahead of the race, so I’ll fill in data for them at tomorrow’s race: Sho-Air Twenty20, Hagens Berman Supermint, Maaslandster Veris, Holden. 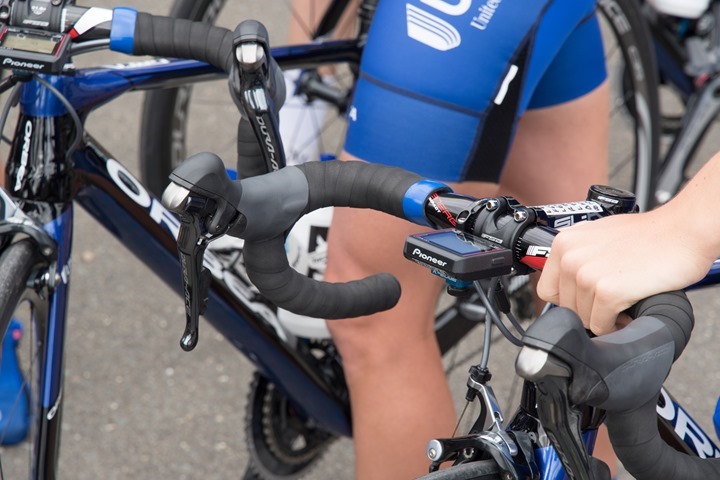 Given how little it would cost various power meter companies to simply gift units to these teams, it’s surprising we don’t see more of that.  For example, the ‘cost’ to a company like PowerTap or Power2Max to outfit 10 riders each with a chainring or spider power meter is pretty trivial.  Sure, these teams are also often looking for cash sponsorship to offset other expenses such as travel.  But at the same time, given how many coaches (yes, even Pro coaches) are increasingly reliant on power data to coach far-flung athletes, I’ve gotta believe any pro team is going to take power meters for free (over not having any power data).

Not to mention the benefit to a power meter company to be able to add a UCI Pro Team to their sponsored athlete roster for what is a relatively low expense.  They’d be able to more easily fill e-mail marketing newsletters with photos of their gear in far-flung locales, rather than just another stock photo somewhere.  Or said differently: Exactly what some brands do on the men’s side.

And of course – we do see some power meter brands making those bets.  For example SRAM and Pioneer completely outfit their teams with units in a cohesive manner.  And in the case of Pioneer, at every event – such as Interbike, Eurobike, and even CES two weeks ago – they’ve had women pro riders in the booths on bikes demonstrating the product.  Yes, even if that booth happened to be in the middle of the car stereo section.  It’s about making an effort to highlight women’s cycling– and they make that effort…every…single time. 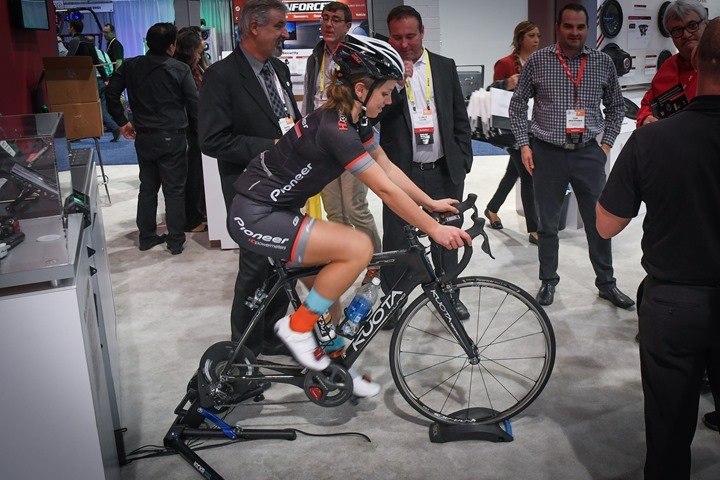 Oh – and stay tuned for more Tour Down Under tech goodness!