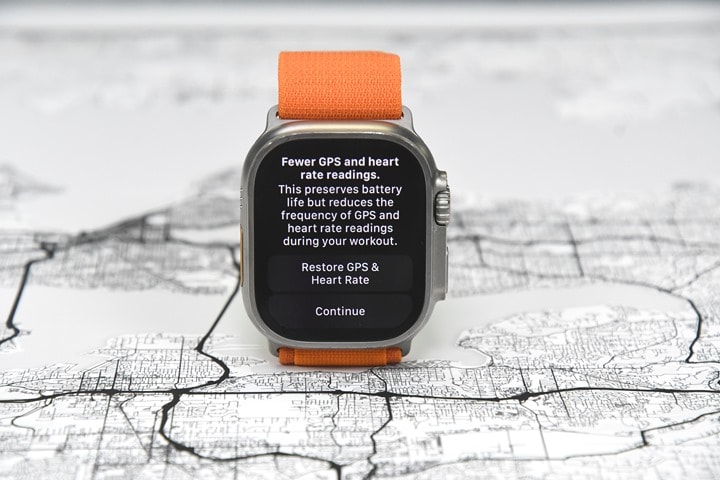 When the Apple Watch Ultra was announced last month, it included an initial lower-power mode across the entire watch that mostly just reduced some background features while preserving workout fidelity. Meaning, heart rate and GPS sampling rates remained the same at 1-second update rates (the industry standard). In this initial low-power mode, Apple claimed you’d have enough battery for most people to finish an Iron-distance race, whereby the average for that is about 15 hours. And indeed, in my testing, I went out and did a 14-hour trail run/hike and finished with about 15% battery remaining in this mode.

However, at announcement they also promised a secondary lower-power workout mode “later this Fall” that would reduce the GPS readings to once every 2 minutes, and heart rate readings to once every 1 minute. That new mode was released today as part of watchOS 9.1. In that mode, the unit would achieve up to 60 hours of battery life. However, that isn’t 60 hours of GPS battery life, but rather 60 hours of smartwatch-life, including other tasks, specifically:

“Hiking, walking, or running workout, over 600 time checks, 35 minutes of app use, 3 minutes of talk, and 15 hours of sleep tracking. Usage includes on-demand LTE connection and 5 hours connected to iPhone via Bluetooth over the course of 60 hours.”

And then within this new mode, the following changes are made:

So to recap, you’ve got basically four levels:

So, how much actual GPS workout time is this new mode? Well, unfortunately, Apple won’t make any claims there. And despite my recent history of going out and hiking/running till various products die (including testing the Enduro 2 this past summer, 8 days of Alps hiking later), I don’t exactly have time this week to go out and run/hike for umpteen hours till this thing dies.

However, what I did learn from my previous Apple Watch Ultra battery test is that the battery decline rate is extremely predictable. During my 14-hour hike with the first lower mode, I kept hourly notes on the battery burn rates. And for almost the entire day it burned very consistently at 6-7%/hour. The one exception was a single-hour mid-day where it randomly burned 14% for no obvious reason. However, that 6-7% realm matches what others have seen as well, again, in the full-fidelity workout mode.

So, what about this new lower-power mode? Well, let’s do some easy tests. First, to enable it – which, does require you to download the latest WatchOS 9.1 update, which will only also show up once you download the latest iOS update – both of which released today. Once you’ve got that installed, under the workout settings within the ‘Watch’ app on your phone, you’ll see the new “Fewer GPS and Heart Rate Readings” option:

When you do so, it lists a partial list of things in the app, but as I’d discover, that’s actually not the whole list. Instead, you have to go out and run and realize what’s missing. For that, I’ve included everything I could figure out in the list above (including things like no running power).

With that enabled, I went out for an adventure. In this case I specifically left the phone behind – but remember the 2022 Apple Watch units (Ultra/Series 8/SE 2nd Gen) no longer leverage the phone connection for any GPS usage anyway. That’s all on-device now. As with before, I don’t have LTE enabled on my Apple Watch Ultra.

When you start any run/walk/hike (the only activities this pertains to), it’ll warn you again you’re about to go into low-data-stinky-mode, and offers to get you back on the straight and narrow: 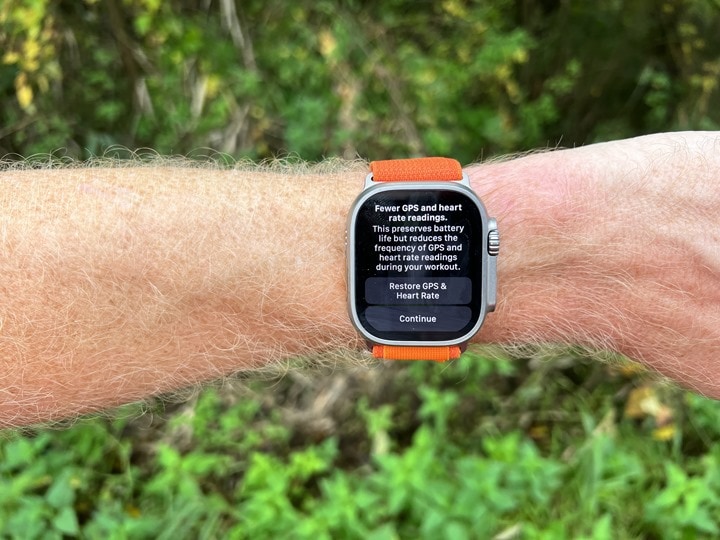 For this test, I ignored that, and off I went: 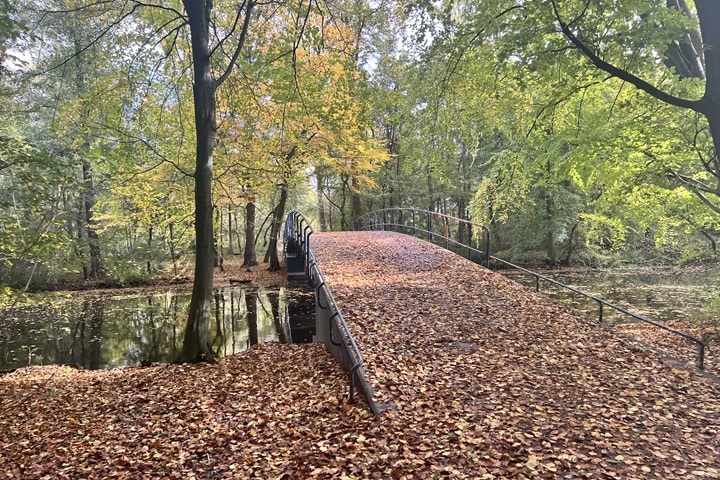 Now, I’m not going to bore you with iterating through the entire run. Instead, I’ll make some quick observational things, and then some data things.

A) Pace/Distance/HR: While running you lose any instant pace/distance type and HR metrics, instead, these are updated roughly once every 60 seconds for heart rate (showing the most recent HR snap at once per minute). And then for distance, you’ll get those updated roughly every 90 seconds from my testing. It wasn’t actually every 2 minutes from the GPS update. This is interesting, as I’d have expected it would use wrist-based accelerometers for continually updated distance (like every other watch on the market), but in fact, it doesn’t, it just updates every 1-2 minutes. You can see this below in these two photos I took, about 70 seconds apart, and the distance and HR remained the same (despite running the entire time): 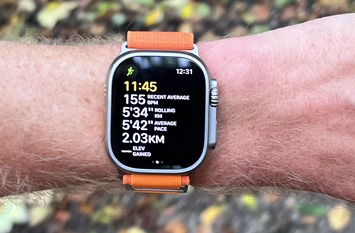 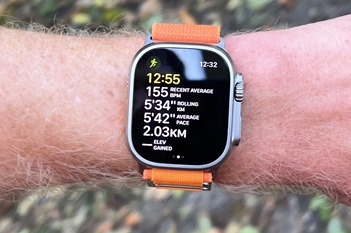 C) Altimeter: My barometric altimeter elevation page didn’t seem to update very friendly either. In some cases, it was once per minute, and in other cases it went a number of minutes between updates. 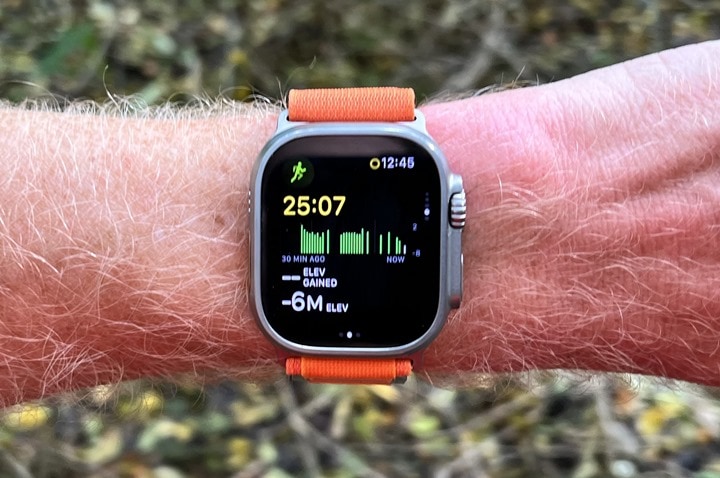 D) Splits: As noted, you’ll get no splits during the run, but you will get splits post-run, though, they won’t be accurate.

E) Heart Rate Strap: Fun fact: If you have a heart rate strap paired via the Bluetooth menu on the Apple Watch, it *WILL* use that at full fidelity (every second), which is cool. I would expect zero battery hit there, since BLE sensor pairings are (by design) incredibly lightweight from a battery impact standpoint, and in virtually every device there’s considerable savings using a BLE/ANT+ chest strap over an internal optical HR sensor. 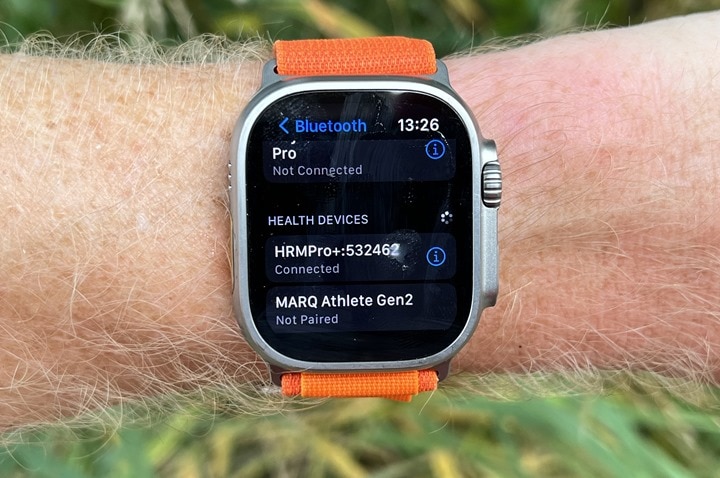 However, the real interesting bits is just how much distance you’ll lose. In my case, my route wasn’t super complex (read: not a mountain switchback route). But, it was a route with both some nice straight sections where lack of GPS updates didn’t matter much, but also some nice forest sections where it entirely misses everything. And while I have plenty of neat comparison charts to show you, the best way to illustrate this is actually Apple’s own map screenshots, as it handily puts dotted lines for all the sections the GPS is off, and then simply connects the dots:

Now in theory, if there’s a phone connected with Apple Maps access, it does some snap-to-route type stuff. But I didn’t have that connected mid-run, and it didn’t snap to route post-run. Realistically though, if you’re trying to eek out every bit of battery on this watch for a 20hr+ adventure, then in my most cases you’re also likely to be trying to eek out battery on your phone, and probably have connectivity turned down/disabled to preserve battery life.

In any case, you can see the impact of the GPS tracks in the comparative maps (here’s the full link if you want to dig deeper): 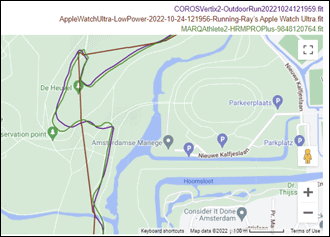 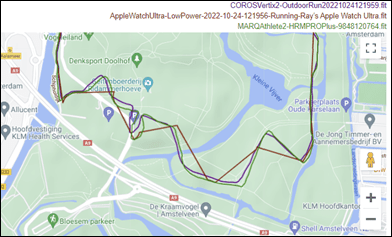 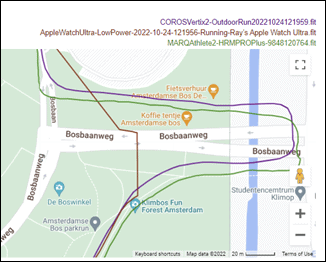 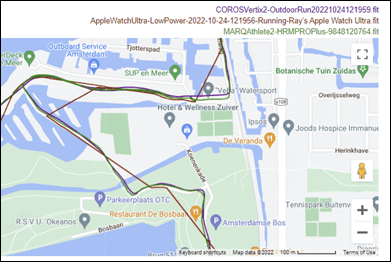 Obviously, it cuts corners like nobody’s business. Entire out/back sections are missing. Rosie Ruiz would be proud. As for the final distances:

Finally, what about battery life of the Apple Watch? Well, that’s apparently trickier. In my case, I started an hour-long run with 86% battery…and…umm…ended the hour-long run with 86% battery. Obviously, it burned some battery, but I apparently stayed within the rounding errors of that to basically be 1% or under. I noted that Dave from Chase the Summit got 1% burn on one of his one-hour trail runs.

And while all that might sound impressive – let’s keep in mind the watch is basically entirely in a low-power-almost-sleep-mode for pretty much all but 60 seconds of ‘work’ out of the entire hour. In reality, it’s certainly a bit more than that, but practically speaking, the amount Apple has turned off here makes this kinda a non-usable situation. If we compare to companies like Garmin, COROS, and Suunto, their low-power modes are still relatively full fidelity except for the GPS sampling rate. But everything else (including distance/pace/HR updates) is all mostly at 1-second intervals. And Garmin’s Fenix 7 Solar can nail an astounding 289 hours in that mode. The Fenix 7X Solar? 578 hours. And dare I mention the Enduro 2? 714 hours! 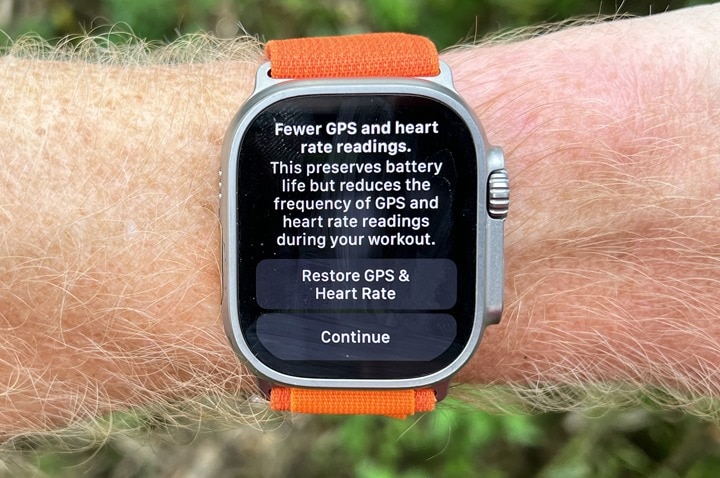 My point here is that for *sports* usage, the new lower-power mode isn’t super helpful. Instead, the mid-tier lower-power mode that doesn’t sacrifice any data depth is where you want to be (and if you really need to make some battery savings there, connect a HR strap instead).

However, as with most things Apple – the benefit of certain features isn’t always endurance sports. Instead, it’s part marketing, and part more casual scenarios. If you just want better battery life in general, and don’t care about data depth, and aren’t moving all that fast, then for casual walks, the data losses aren’t that big a deal. Especially if you have your phone with you so Apple Maps can do some magic.

Either way, as I’ve said many times about the Apple Watch Ultra since its release: Judge the future of this segment not by Apple’s initial trials and tribulations, but instead, where they are in about 12-18 months. It’s been just over a month since the Apple Watch Ultra started shipping, and this is the first of a number of planned sports-focused feature updates this year alone (still including a race pacer mode, track mode, and more). Some of these new features they’ll get right on the first go, and some of them will need to go back for more refinement after user feedback.

At the end of the day, I’m an athlete just like you looking for the most detail possible on a new purchase. These posts generally take a lot of time to put together, so if you're shopping for the Apple Watch Ultra (Alpine Loop Orange) or any other accessory items, please consider using the affiliate links below! As an Amazon Associate I earn from qualifying purchases. It doesn’t cost you anything extra, but your purchases help support this website a lot. Even more, if you use Backcountry.com or Competitive Cyclist with coupon code DCRAINMAKER, first time users save 15% on applicable products! 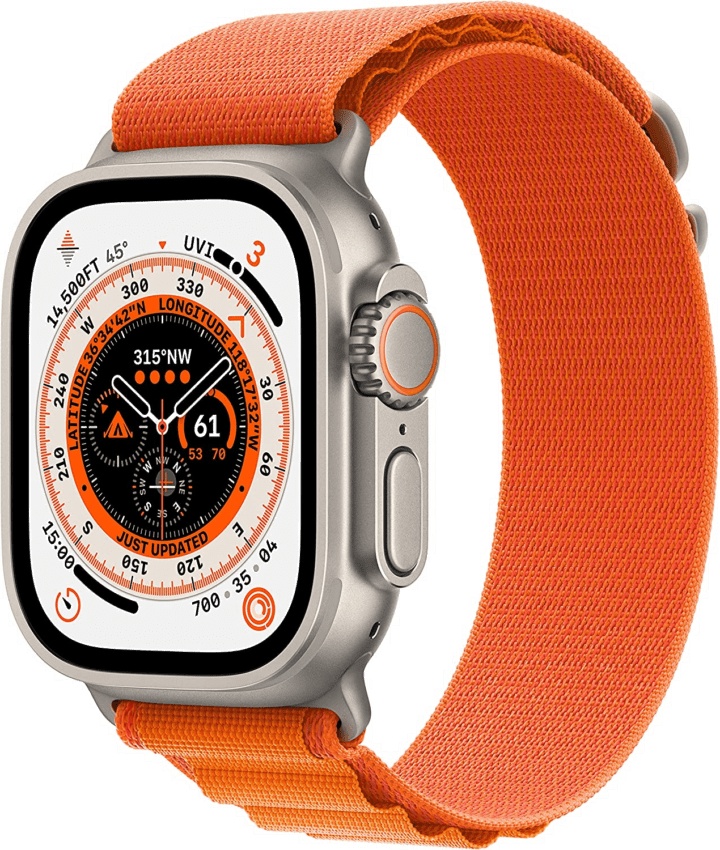