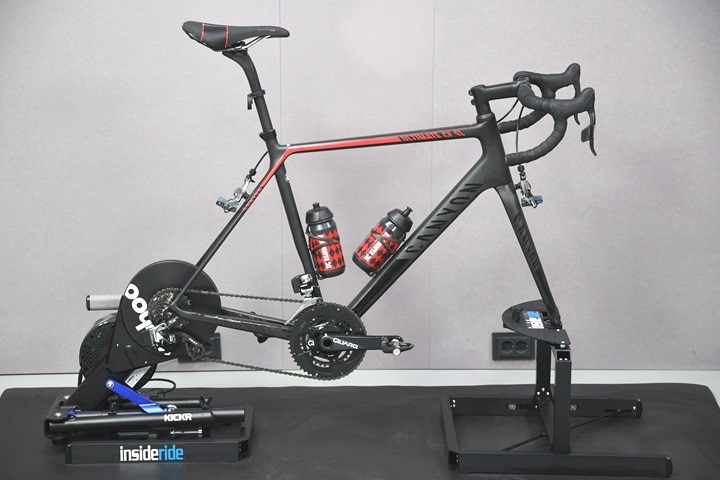 Let’s just get this out of the way up front: I’m officially proposing that InsideRide call this the product the FLOATR.

The Wahoo-specific accessory enables you to essentially float your KICKR and ultimately your entire bike on two small platforms that act akin to a rocker plate, except with more axes of movement and with a smaller footprint. Though, also with only Wahoo KICKR compatibility at this point.

But I suppose we’re just getting ahead of ourselves at this point. See the product is somewhat already officially named the ‘InsideRide KICKR E-Flex System’, and isn’t made at all by Wahoo. Rather, it’s a 3rd party accessory from InsideRide. That company of course is well known in the indoor training space, primarily with their E-Motion smart rollers system that I demo’d last month.

With this new product though they’ve borrowed the floating fork stand that I tested (and liked), and paired it with a small secondary platform not much bigger than a cafeteria tray. That rear platform clamps onto your Wahoo KICKR (any model year, but not the CORE/SNAP), and allows both tilting side to side movement as well as front/back movement.

I’ve got a few workouts in on it now, so let’s give things a quick spin. Note that this is a prototype, and based on some feedback I’ve given them, they’ve already made a few manufacturing changes. But we’ll get to that later.

If you want to just dive right into it – here’s my video to get the quick one-coffee duration overview:

Got all that? Good, let’s dig a bit deeper.

As noted there are two pieces to this puzzle – and both are critical to making the whole kit work. Without either piece the system won’t work, since the two components (front and back) work together to enable motion. Starting on the back you’ve got the platform that holds the KICKR itself. As noted above it’s roughly the size of a tray table, and technically it reduces the footprint of the KICKR ever so slightly, since you’ll close up the legs while on the platform. 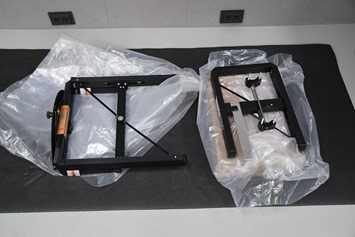 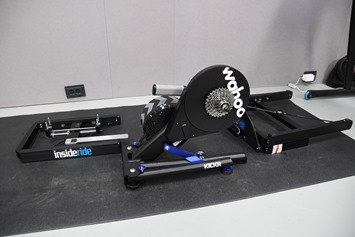 To get it installed you’ll first twist the KICKR feet until they come out (just like feet on a piece of furniture), then you’ll remove the front plastic cap – it just easily pops off after removing a single screw. Don’t worry, you can re-install all things in under 90 seconds if you decide flexing isn’t for you. 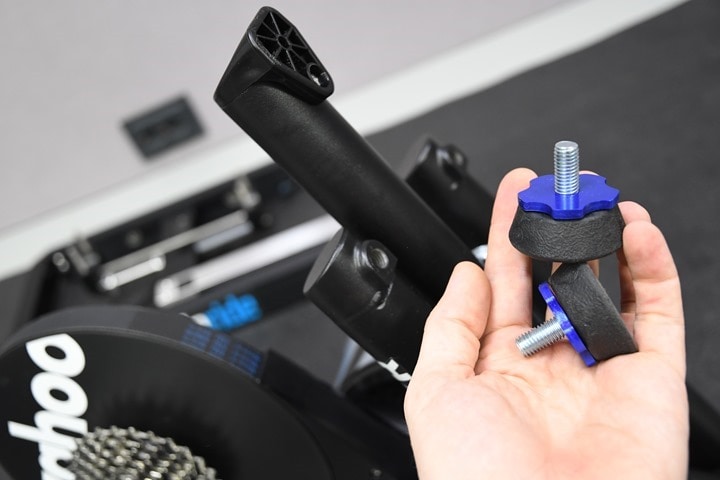 Next, you’re going to place the KICKR onto the platform. It’s got a specific spot for it, and it’ll self-stabilize as it has a groove there to slide the middle leg into. Then you’ll lock it in place using four wing nuts: 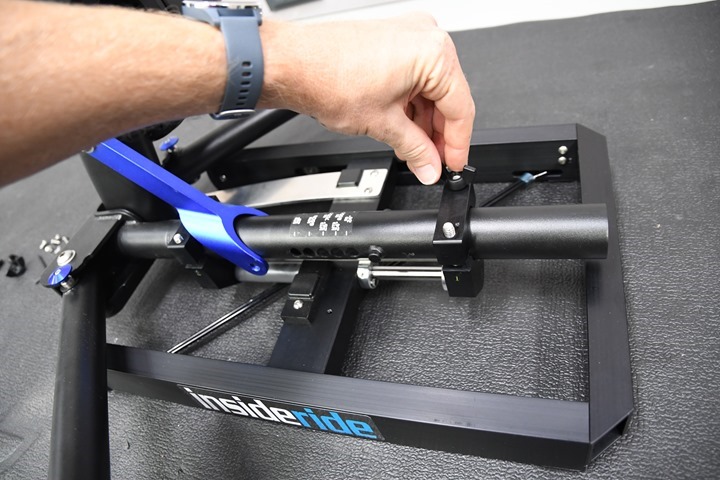 After which there’s a small pod you’ll shift out of the way that lets the platform start to move and tilt (otherwise mounting the KICKR to the platform would be like wrestling on a slip and slide). 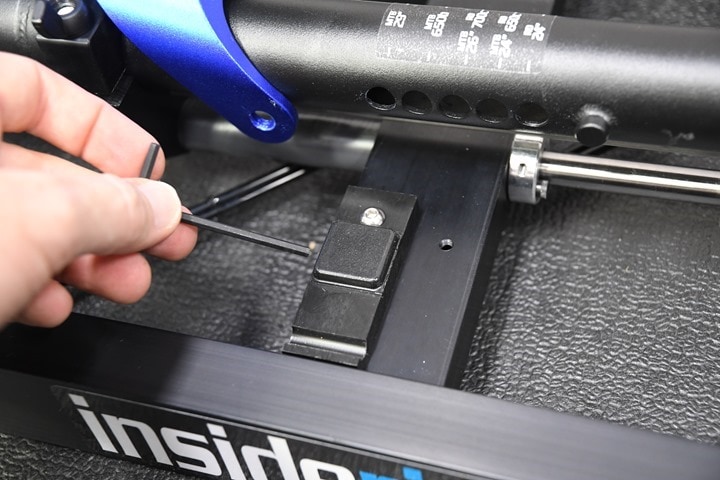 Here’s the final look/configuration after you’ve simply folded the legs back in like normal: 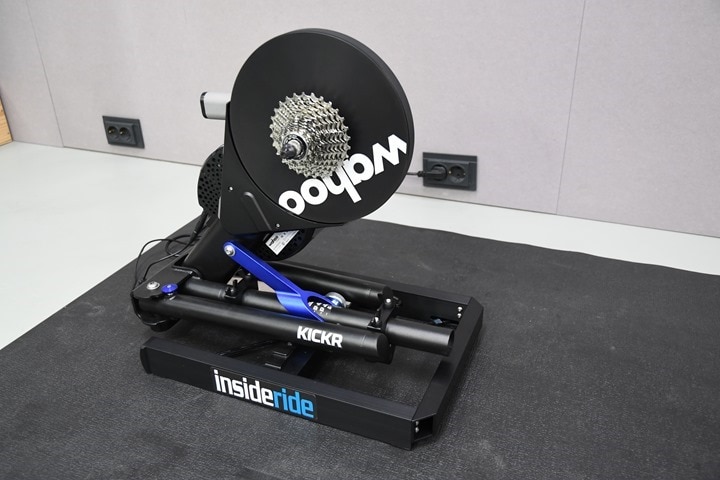 With all that set, you’ll shift your attention to the front fork stand. You’ll simply unfold it and screw-in a few additional screws to lock it in place. 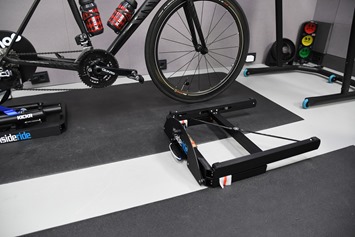 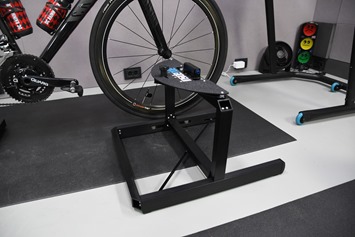 After that you’ll just mount your front fork to it. Like with the floating fork stand that I reviewed on the rollers, this still oddly doesn’t come with a front skewer. So either go out and spend a couple dollars to leave one there, or keep swapping it back and forth to your front wheel. In my case I grabbed a spare one from a drawer. 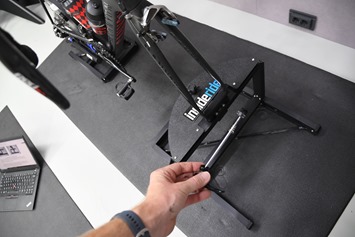 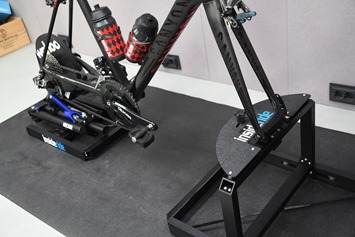 After that, simply mount your bike to the KICKR and fork stand just like you normally would. Nothing fancy to do except then get on the bike…but that, that might require a bit of fancy.

If one steps back and evaluates the ways you can crash your bike within your own living room, there’s a rather simplistic scale that has three data points on it:

Now, I’ll say upfront that it sounds like InsideRide is already taking my initial feedback into account and looking at adding a bit more base stability, so it’s less likely to tip. But, getting on the bike you’ll want to lock the front rotational knob, so that it doesn’t rotate. By cutting off the rotation, it’ll then keep the rear of the unit from tilting, which will reduce the tippage factor (as you’ll see in the video): 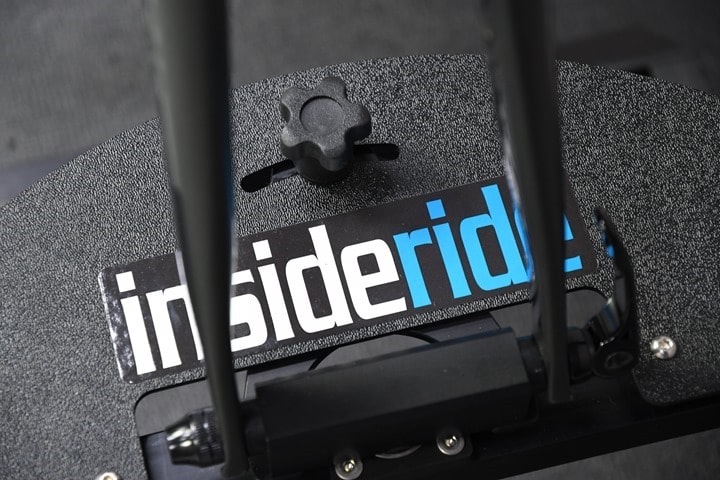 Once on the bike you can simply reach-down and unlock that again, it just takes one twist – so it’s super easy. The first thing you’ll notice is that everything is connected. I know that sounds obvious (especially if you watched the video), but when you twist your handlebars (either naturally with each pedal stroke or manually), it’ll in turn twist the frame which then causes the rear of the bike to tilt. Exactly like outside. 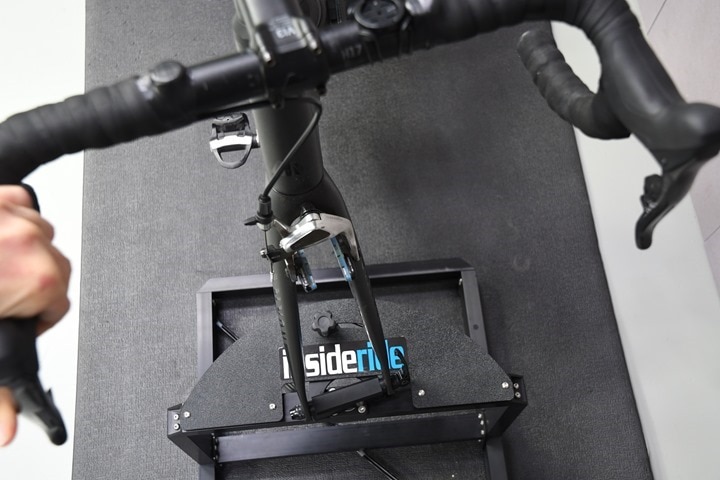 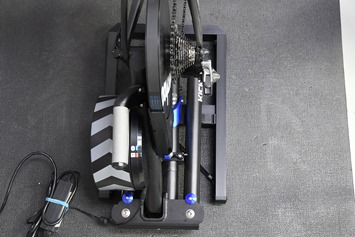 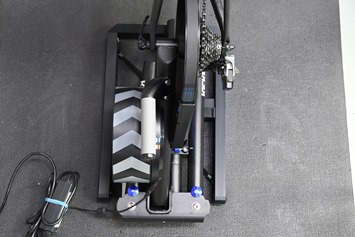 However, both the front and rear do slide forward and backwards. In the case of the front you’ll see more easily that it has a small roller system built into the front frame, coupled with rubber-band like cables that drive the motion. 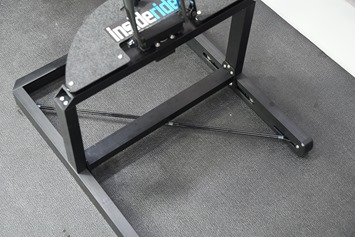 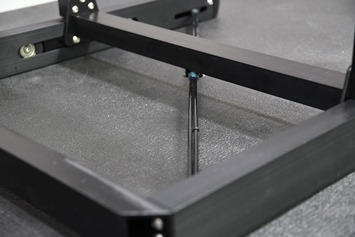 Meanwhile, the back has the same bands, it’s just they’re a bit more hidden under your trainer. 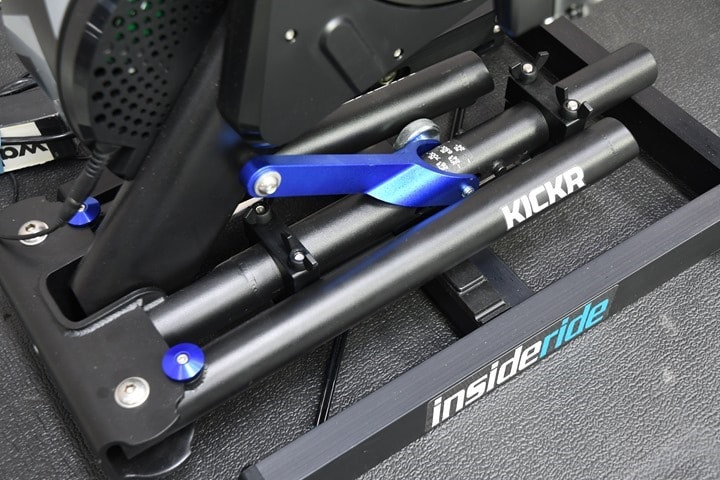 With all the how it works aspects covered, what about the ‘What does it feel like?’. Well, the answer there is mostly quite good. As you’re just pedaling along normally you’ll notice/realize that with each pedal stroke you’ve got a very slight bit of rotation into the handlebars. In some cases perhaps only a millimeter or so, but just enough that it feels a bit like you’re constantly floating, because the bike doesn’t have a locked feeling. 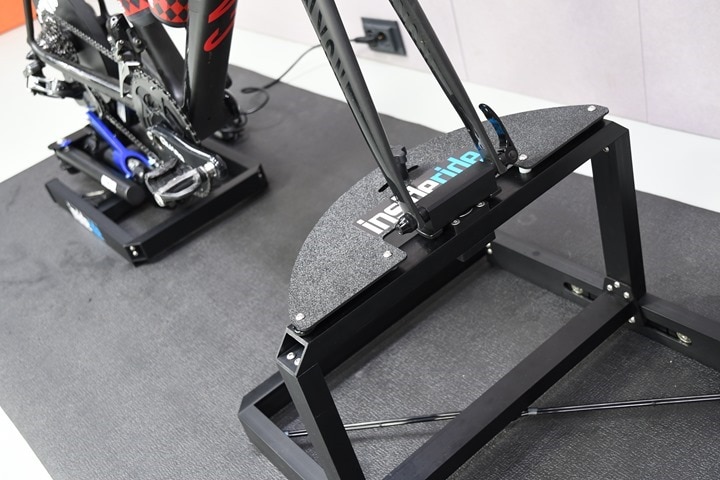 Meanwhile, when you start to accelerate or sprint, it’ll drive the bike forward slightly on the rolling platform – exactly like their previous products (and also roughly akin in feeling to the Saris MP1 platform). Of course, a split second later you’ll slide slightly backwards – mimicking the lack of acceleration driving you forward. Mentally it works quite well, though obviously outdoors you don’t go backwards after each sprint.

From a tilting standpoint, you don’t think about it. It just happens. The harder you press into the pedals the more it tilts, not due to the direct nature of pressing into the pedals but because you’re actually pressing down into the handlebars when you sprint. Additionally, unlike some rocker plates, you’re not fighting the system. There’s no excess platform weight to combat, because the only weight you’re moving is the KICKR itself and your body.

Again, it’s really best for this particular topic to watch the video – even if you skip about half-way through it to where I’m riding and do a few sprints. Plus, it had three camera angles, including a top-down angle.

Ultimately, I like it quite a bit – it’s far more affordable than higher-end options, or perhaps more practical than building your own. On the flip-side, it’s only compatible with the KICKR. There’s absolutely no way to modify this specific model to fit another trainer model (even the KICKR CORE wouldn’t be compatible). InsideRide would have to come out with additional models for each trainer they want to support (for the back platform portion, the front stays the same). The company says they’re open to that, but first want to see what demand looks like. 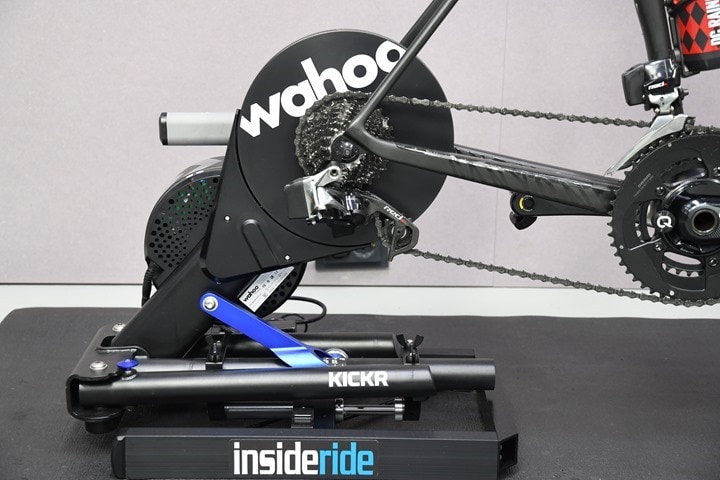 Every so often a smaller company in the space has their breakout moment, or product. Up until this point, InsideRide has mostly been focused on a niche product (smart rollers). But I think this trainer accessory could finally be what gains them some popularity beyond the niche realm of rollers.  After all, no company has sold more smart trainers than Wahoo, and in particular, no single trainer product model has more units in the market than the Wahoo KICKR. And at present, it’s a very static product with no give or sway.

The growing trend over the past 12 or so months has been around motion. We’ve seen it with the numerous homemade rocker plates, the Saris MP1 Platform, the Kinetic R1 trainer, and even Wahoo’s own KICKR CLIMB to go up and down. The challenge with many of these products has been the price points – it’s a bit of feast or famine. You’ve got super expensive options like the MP1 at $1,199 or the KICKR CLIMB at $699. And then you’ve got folks making home-made rocker plates for a few hundred bucks.

In comparison, the ‘assemble in 10 minutes’ InsideRide FLOATR KICKR Flex Motion System is pretty reasonably priced at $399 for a well-built system. I expect that any final version they start shipping will include the few tweaks that I suggested to improve stability and dampen any bunny hopping on sprints. They’ve already sent over some photos of those mechanical tweaks made within a few hours of initial e-mails around those topics.

But ya know what might be the best part of it all? There’s no firmware to update, or electronics to fiddle with. It’s just good ol’ mechanical goodness. No waiting for a future firmware update at an unknown date to fix accuracy issues like seemingly every other trainer product this season. I like it.